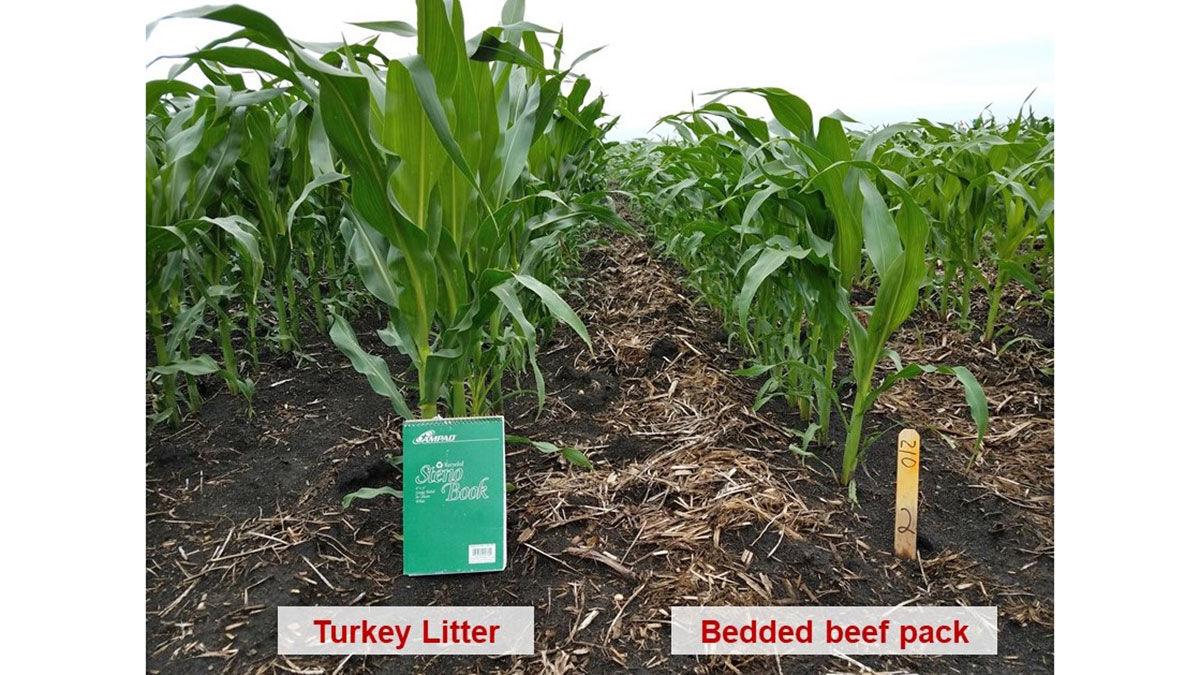 The bedded beef pack (right, compared to turkey litter on the left) released the least amount of nitrogen of the six manure sources in year one. 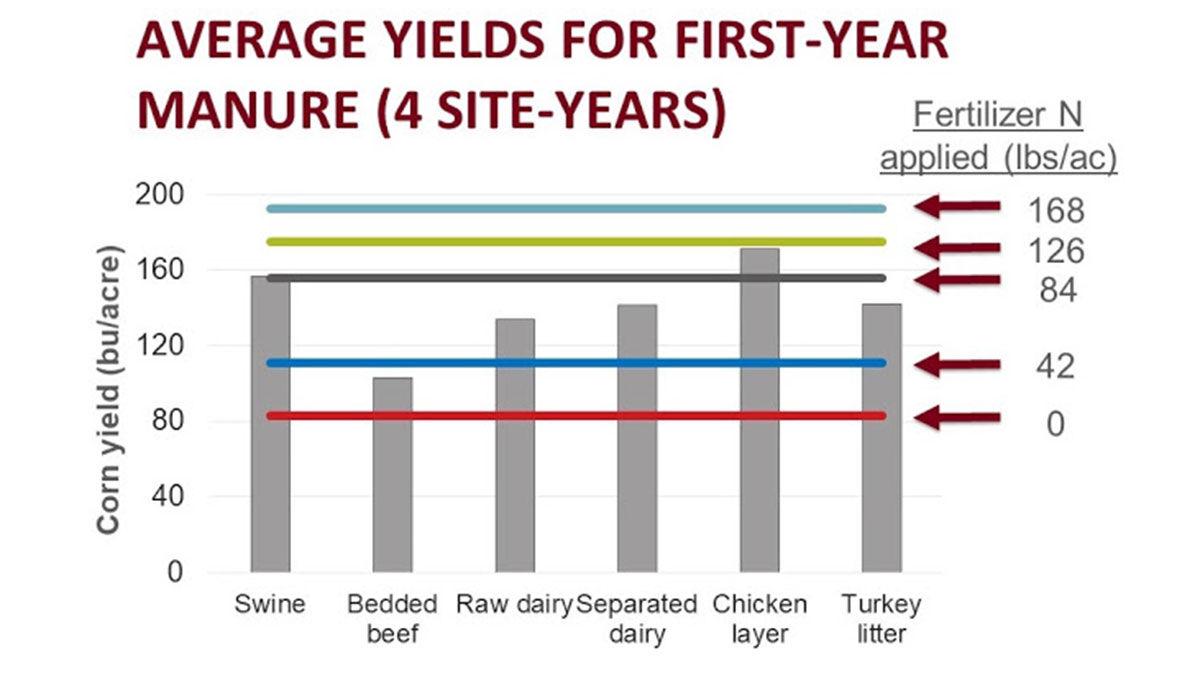 The bedded beef pack (right, compared to turkey litter on the left) released the least amount of nitrogen of the six manure sources in year one.

For farmers who apply manure, it can be difficult to know how much nitrogen (N) is in the manure they’re applying and when it is available to the crop. This makes it hard to make decisions about how much additional N fertilizer to apply.

An ongoing study by the University of Minnesota is studying six different types of manure over several years in an effort to update the university’s manure guidelines.

One of the key takeaways from the study so far is that the amount of bedding in the manure matters.

“If you are applying dairy or beef manure with bedding, then you should probably be aware that the nitrogen release is going to be slower,” said Melissa Wilson, University of Minnesota Extension manure management specialist and lead researcher on the project.

The researchers had each of the manure sources analyzed and applied them in the spring on corn-after-soybean plots at the recommended rate (140 lbs. N/acre). Then they compared them to plots where they applied N fertilizer ranging from zero

to 120% of the full university- recommended rate.

“That way we could compare what the nitrogen uptake in the corn was for the manures versus what it looked like for the fertilizers, which is more of a known quantity, to get a good estimate of what the fertilizer equivalent of the manure was,” Wilson explained.

No manure was applied in year two or three of the study in order to see how much nitrogen carried over from the first application year.

Overall, first year yields were lower than expected and there wasn’t much N carryover into year two for some of the manures. This may have been due to the wet conditions during the first two years of the study.

“For pretty much every manure source at both sites, we were not getting as much nitrogen released as we expected,” Wilson observed.

Unlike N fertilizer, the N in manure is in two different forms, the organic form and the inorganic (plant-available) form. The organic portion has to mineralize first to become plant-available. The years 2018 and 2019 were very wet compared to historical averages, which could have hindered mineralization.

“The microbes that would normally be doing that couldn’t survive in those conditions as readily as in a normal-to-dry year,” said Wilson. “If this is correct, then the N may still be in the soil. It will be interesting to see what happens this year.”

Averaged across all four year-one sites, the composted chicken layer manure provided the most N, followed by the swine finishing manure, the turkey litter, the raw dairy manure, and the liquid separated dairy manure. The bedded beef pack performed the worst of all of the sources. This data is preliminary as the study has not been published yet.

Percentage N available in year one ranged from 58% for the chicken litter to just 8% for the bedded beef pack. This compares to an assumed N availability ranging from 75% for swine finishing manure to 55% for the two dairy sources.

Despite the low N availability for several of the manure sources in 2018, there didn’t seem to be much left for the crop in 2019. Most of the sources were close to the zero N fertilizer equivalent. The bedded beef pack and the chicken litter did have some N carry over to year two. The beef provided around 25 lbs. N/acre and the chicken around 20 lbs. N/acre.

In year one, the researchers used aerial images to spot differences in the strips from above. Yellow corn was easy to see in the zero N fertilizer strips and, unfortunately, the bedded beef pack strips didn’t look much better.

“The bedded beef pack did not release nearly as much nitrogen as we expected,” said Wilson. They were expecting about 60% nitrogen availability in the first year but only saw 8-15%. “We think some of that had to do with the bedding.”

Because the beef manure included a grass bedding in year one and corn stalks in year two, Wilson believes these organic materials tied up some of the N in the manure.

“When you start adding bedding that might have a high carbon content, like hay or corn stalk cobs, for dairy and beef manure especially, that definitely seems to change the nitrogen release,” she said.

While the bedded beef pack had less N release the first year compared to the other manures, it had the highest second-year release. This suggests that the N was tied up in the organic form in year one and then released a bit more the second year.

However, there may have been other issues as well. Bedding in manure may make it more difficult to obtain an accurate manure analysis.

Despite potential issues with manure analysis in the study, Wilson recommends that growers get their manure tested before application rather than rely on published book nutrient values.

Manure varies a lot from farm to farm, especially when bedding is involved. For example, the turkey litter the researchers used the first year was “fresh out of the barn” and released a similar amount of N to the top-performing chicken litter. However, the turkey litter the next year, which they received from the same farm as the first year, had been sitting longer and didn’t release as much N.

“As the pile ages, you would expect some of the active nitrogen to be removed through rain and gaseous losses,” said Wilson. “When you have a more aged product, you have a lot less of the immediately plant-available stuff.”

Current university recommendations assume that the ratio of available N to organic N is the same regardless of the amount of bedding. That could change after this study.

“I’m hoping that adjusting based on how much is in the organic fraction versus how much is in that ammonia fraction will help fine-tune that a little bit more, because I’m thinking that what a lot of these storage practices are really impacting is that ratio,” said Wilson.