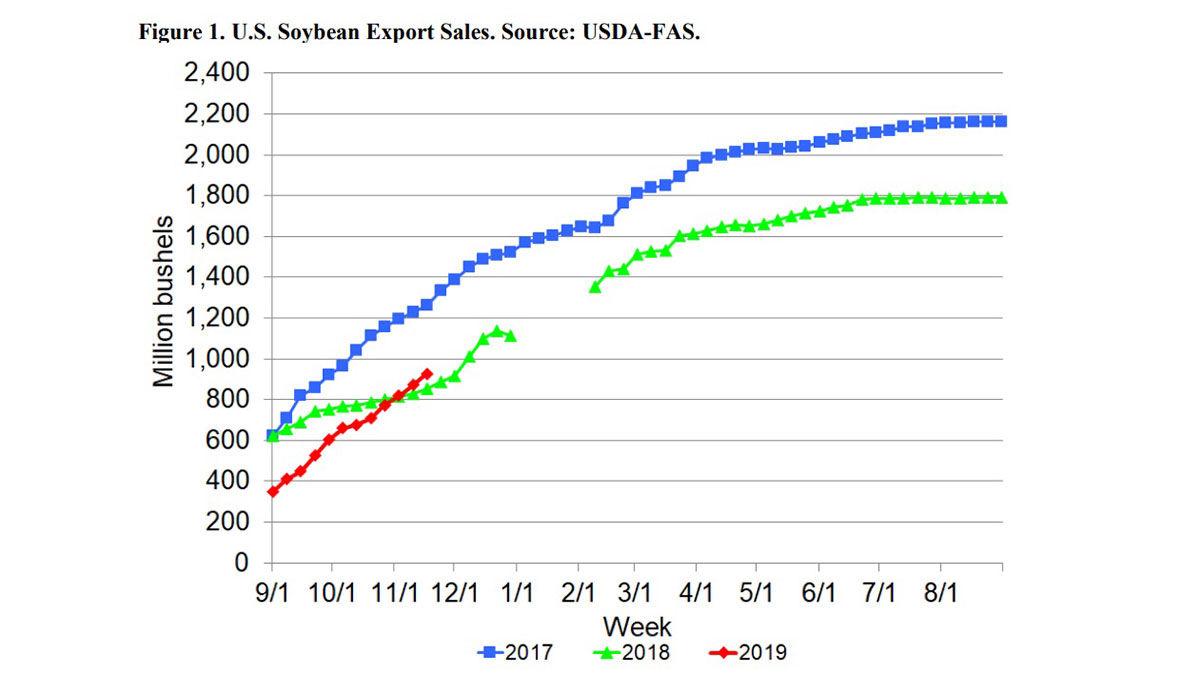 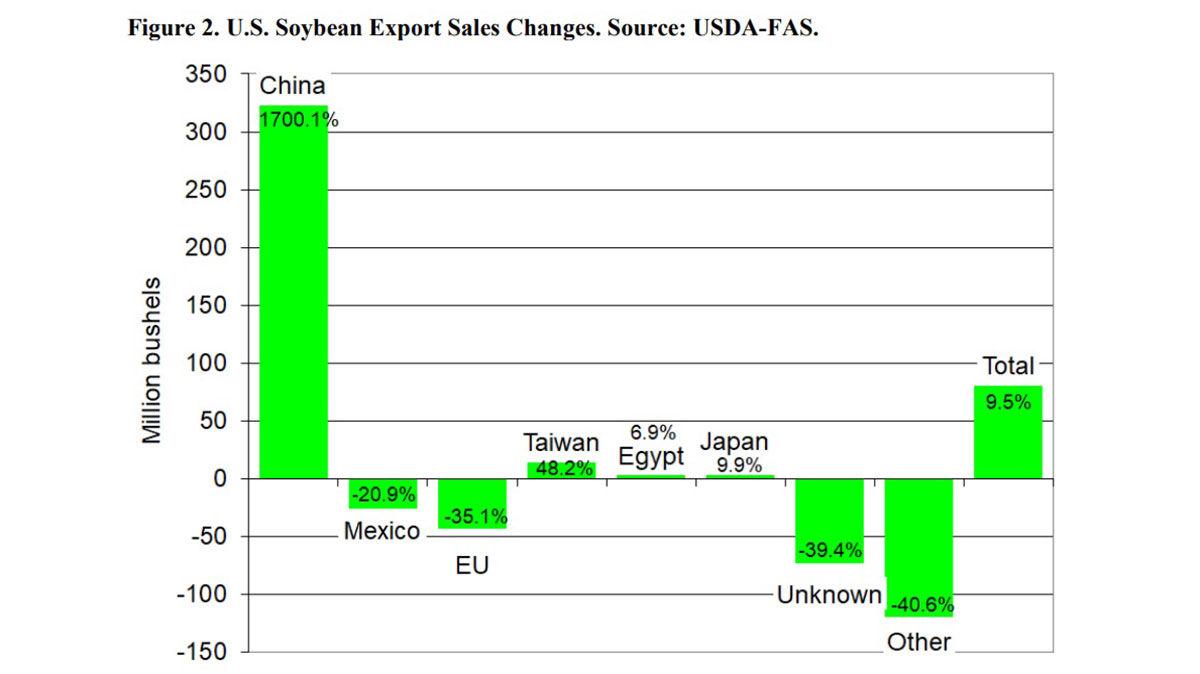 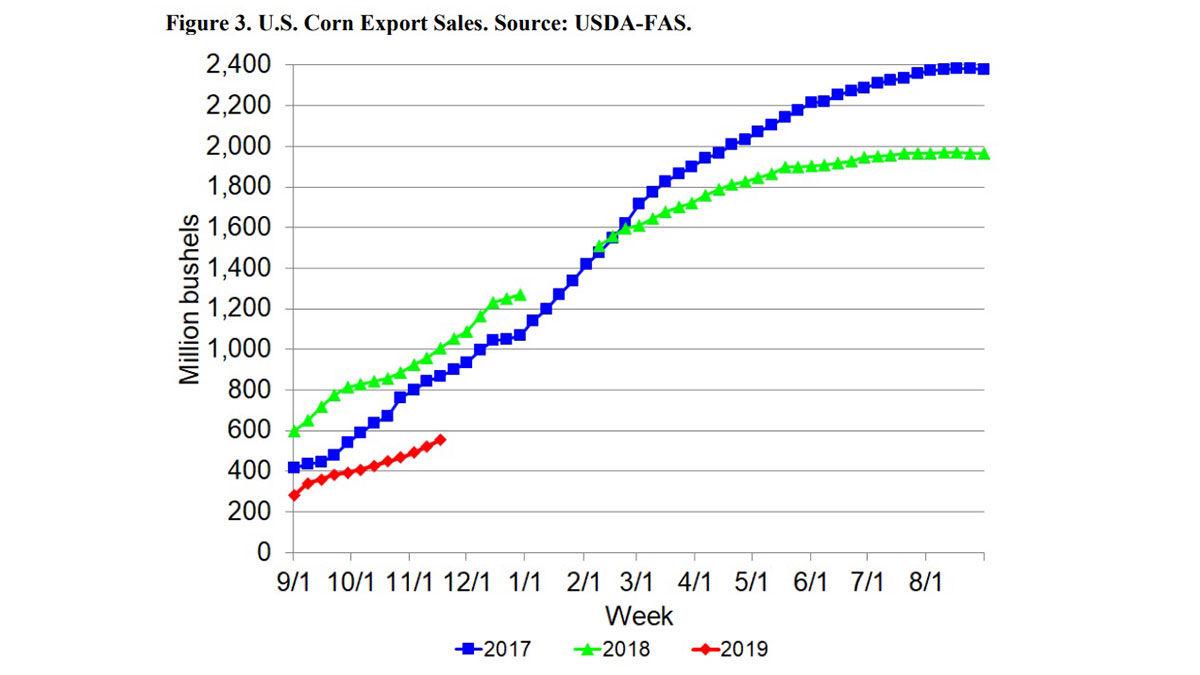 As the USDA’s 2020 initial projections showed, the next calendar year looks to be a challenging one.

Farmers will be trying to bring back nearly 20 million acres of prevented planting land. Crop production levels remain high, despite the planting and harvesting issues. Yields in the neighborhood of trend would bring about the largest corn crop ever and the fourth largest soybean crop.

Much of the Corn Belt will go into the next planting season with soils that are saturated, so there will be plenty of moisture to grow a crop, assuming farmers can plant. But one of the biggest issues facing farmers as they go forward to 2020 will be concerns about crop demand.

This year, as the USDA has lowered its production estimates, it has also lowered its crop usage figures. And that pullback may continue as we enter 2020. The damage to international crop trade has been building for the past couple of years and the cracks in demand are now occurring in some unexpected places.

While most of the press has concentrated on the U.S.-China trade war, the export data for 2019 is showing that trade issues range well beyond our two countries.

Figure 1 outlines the flow of U.S. soybeans in international markets over the past couple of years. As the figure shows, soybean trade flows were significantly impacted at the start of the 2018/19 marketing year (marketing years start in September for soybeans and corn, aligning with the harvest of the crops).

Initially, that was due to the trade war, as China severely curtailed their soybean purchases from the U.S. The drop in soybean exports expanded to roughly 400 million bushels very quickly, with the vast majority of that loss in China.

That 400 million bushel gap persisted through the end of the 2018/19 marketing year.

So while the overall pattern in soybean exports has held steady, the mix of sales to individual countries has not. While the initial hit came in export sales to China, that is not the case today. In fact, China has returned to the U.S. soybean market and reestablished itself as the top market.

Compared to sales last year at this time, China has purchased over 300 million more bushels of soybeans. That is a tremendous turnaround, but it still puts Chinese demand for U.S. soybeans well below the large volumes we sold them in 2015, 2016 and 2017.

And as China returned to the U.S. market, other countries stepped away, offsetting the gains. Sales to Mexico have fallen by 20%. Purchases by the European Union dropped by 35%. Sales losses in our smaller markets (labeled “Other” in the figure) have plummeted over 40%.

The question for 2020 will be whether the international market will close the gap. The expansion in China has helped stabilize the gap. But the concerns for soybean exports will center on two issues. One, how much damage has occurred to Chinese demand for soybeans with the continuing problems with African swine fever and the loss of a significant percentage of the Chinese hog herd?

Two, will we see a rebound in our smaller export markets in 2020? Over the past couple of years, our smaller soybean markets served as a counterbalance to Chinese shifts, increasing significantly as the Chinese tariffs hit, but also declining now as China reenters the marketplace.

Given the potential return of a sizable portion of land to soybean production in 2020, farmers will hope for those smaller markets to rebound again. A few key markets to watch are Canada, Thailand and Iran. In each of these countries, we have seen a dramatic reduction in soybean purchases so far this year.

Corn export sales were able to hold off the trade problems for a while. But once the calendar flipped to 2019, corn export sales experienced a steady erosion that continues today.

Where the soybean story had a well-defined starting point (China), the loss in corn exports is much more broadly based and, because of that, much more troubling.

The decline in corn export sales seems to be a worldwide phenomenon. We see reductions in Latin America, Asia, Europe and Africa. As the figure shows, corn sales are currently down in all of our top six markets, and in most cases, the declines are at least 10%.

But again, as with soybeans, it’s the sales to our smaller markets where the most damage has occurred, with the drop approaching 80%. Out of the 43 countries USDA tracked for corn sales, only eight show growth. The African markets have disappeared. South Korea was our third largest market at this time last year, now they are 17th.

Whereas the soybean market can pin its hopes on China, the corn market doesn’t have an easy or clear way back. In 2020, corn will likely add acres as well, returning from prevented planting. The additional acres signal a need for additional outlets.

But as the export sales data show, the search for those outlets will be challenging. Based on the export patterns as they currently stand, 2019 was a rough year, but 2020 will be rougher.

A Kansas State University researcher says he may have an innovative way to kill weeds commonly found in farmer’s fields: simply put, he wants …

Alfalfa provides many benefits to the corn crops that follow it, with the most notable being greater yield and reduced need for nitrogen application compared to when it is grown in other rotations.

GALENA, Mo. — If there was ever a time to do a soil test, this is it, says University of Missouri Extension agronomist Tim Schnakenberg.

Now that the harvest has wrapped up, the market’s focus is shifting from the supply side to the demand side.