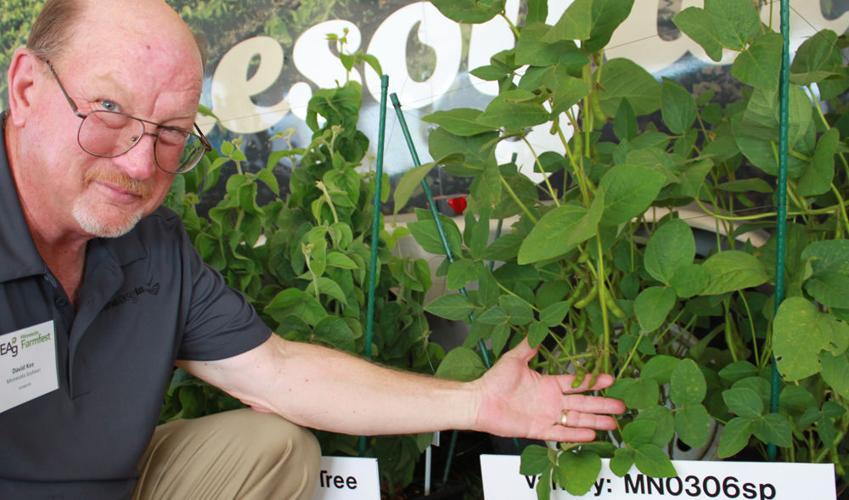 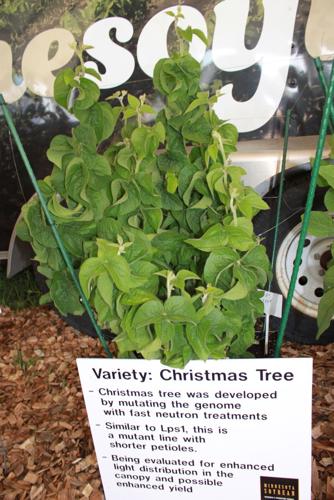 This line was developed by mutating its genetics with fast neutron treatments. It is named for its festive appearance and features shorter-than-normal petioles. 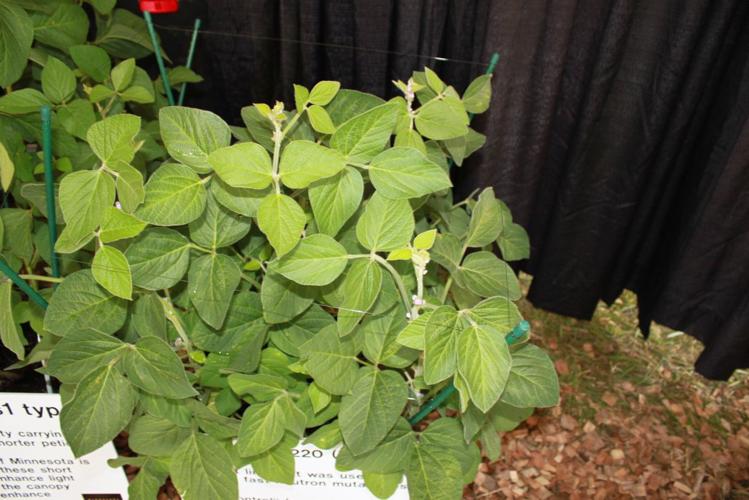 University of Minnesota scientists use M92-220 in fast neutron mutagenesis. The original/wild variety, shown here, is used as a control to compare with mutated lines. 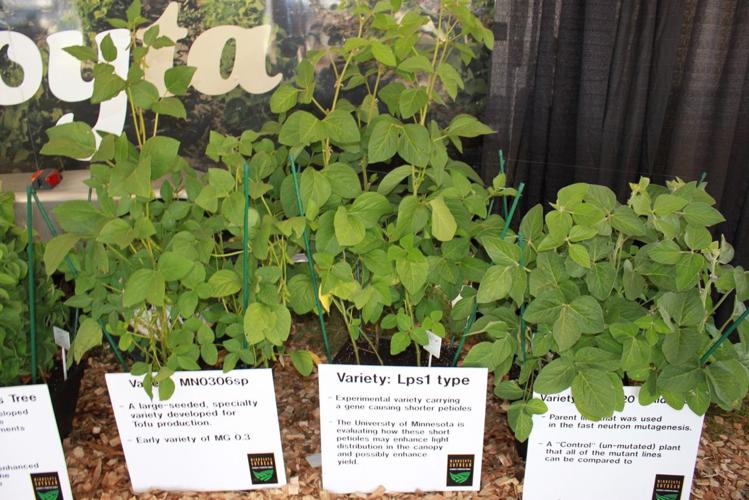 This experimental variety contains a gene causing shorter petioles. The tall plant has fewer branches to enhance light distribution through the canopy. Researchers want to find out if Lps1 can produce a greater-than-average soybean pods and seeds.

David Kee encourages growers to take a look at soybeans from a different angle.

Kee took these varieties to Farmfest in August to showcase in the Minnesota Soybean tent.

The idea behind displaying soybeans “like houseplants” was to show that each soybean plant or variety has its own characteristics and purposes.

Kee hoped to inspire growers and end users to broaden their vision of what soybeans can do.

About 40 percent of Minnesota Soybean checkoff production research dollars have been used to support the University of Minnesota soybean genetics work.

“It’s a long-term investment,” Kee said. “We believe in genetics. We believe we have the tools for farmers to produce the materials they need.”

For example, the Christmas tree variety (described below) was found in a mutant population created primarily by genomicists Bob Stupar and Carol Vance.

“The breeding program is where novel variation is incorporated into the useful varieties that can be grown by a farmer to make a profit.”

From conventional varieties with high yield potential, to whole foods, to the incorporation of new traits, Minnesota’s soybean program focuses on improving production.

“The University of Minnesota has done a great job of developing varieties for the soy food industry in our region,” said Keith Schrader, Minnesota Soybean Research and Promotion Council chairman.

“This work has enhanced income for many Minnesota farmers, as it is value-added varieties that enhance farm profitability. I truly believe some of the projects they are doing right now could be quite groundbreaking technology for the seed industry.”

Here is a list of the Minnesota soybean varieties that Kee showcased at Farmfest in 2016:

Ranging in maturity from 0.3-1.8, all have resistance to soybean cyst nematode, and are used for conventional as well as organic cropping.

These varieties produce high yields across the state. About 4-5 percent of Minnesota soybean acres are planted to conventional varieties as an alternative to paying tech fees plus seed costs.

Edamame is a vegetable-type whole food soybean. The taste is similar to young garden peas but with more substance. Generally harvested when edamame is young, the beans are eaten raw or cooked and the pods are also sometimes eaten.

Edamame is a traditional Japanese food that is gaining popularity throughout the world.

Popular in some areas of Japan, natto is a breakfast dish that is made from fermented soybean varieties. The UM3 variety is a small-seeded, specialty natto release from the University of Minnesota.

Tofu is made from soybean milk that has been coagulated and pressed to make curds. The whole soybean food has a delicate taste that mixes well with many other flavors and foods. It has been used as a protein source by vegetarians, but has gained popularity in many cultures.

This 0.3 maturity variety has a large seed and was developed specifically for tofu production.

While Minngold is used to mark seed nursery rows and varietal trials, Green Minngold is a valuable marker in the fall with its unusual pod and seed colors.

“When you have thousands of plots out there, you need a few markers to keep up with the grid,” said Kee. “It’s a way to solve a jigsaw puzzle.”

Variety - Lps1 type – Scientists asked what would happen if each soybean trifoliate were connected to the main growing stem by a short-stemmed petiole.

The resulting tall plant with fewer branches holds the potential to enhance light distribution in the canopy. Could the more compact variety produce more soybean pods and beans? University of Minnesota soybean researchers are evaluating Lps1 to find out.

Someone saw this experimental variety and thought it looked like a Christmas Tree. Similar to Lps1, Christmas Tree features shorter petioles with the hope of improving light distribution and increasing yield.

This line was developed by mutating its genetics with fast neutron treatments.

“This plant could work for narrow-seeded rows and use at a higher seeding rate,” Kee said. “This holds the potential for an increased number of plants per acre, thus increasing the yield per acre.”

Scientists used M92-220 in fast neutron mutagenesis. The M92-220 wild type variety is used as a “control” plant, and the mutated lines are compared to the original variety to observe differences.

Through his soybean varietal showcase, Kee encouraged growers to consider looking at soybeans from other vantage points. With the many types of soybean varieties available, growers may find new uses and markets for their crops.

This line was developed by mutating its genetics with fast neutron treatments. It is named for its festive appearance and features shorter-than-normal petioles.

University of Minnesota scientists use M92-220 in fast neutron mutagenesis. The original/wild variety, shown here, is used as a control to compare with mutated lines.

This experimental variety contains a gene causing shorter petioles. The tall plant has fewer branches to enhance light distribution through the canopy. Researchers want to find out if Lps1 can produce a greater-than-average soybean pods and seeds.