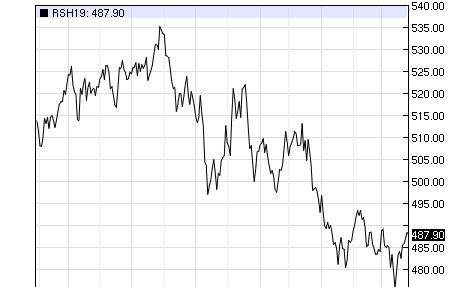 Cash canola prices advanced in the neighborhood of 30 cents a hundredweight (cwt) in late January, according to Barry Coleman, executive director of the Northern Canola Growers Association. The cash prices on Feb. 5 ranged from a low of $16.60 to $17.23 per cwt. The March price for futures contracts is at $484 a ton, which was roughly the same figure as two weeks earlier.

“The fundamentals for canola are somewhat burdened right now with heavy farmer deliveries in North America, which has been keeping the commercial pipeline full,” Coleman said. “STATS Canada also came out with their latest stocks estimate, which indicated canola stocks at 14.5 million tons and that isn’t a market mover this morning.”

He noted that heavy farmer delivery has resulted in the amount of canola in the commercial pipeline up a little bit; however, the canola exports out of North America have picked up recently and are now catching up to the last year’s export numbers. Additionally, domestic crushing is now running ahead of last year, which is a positive factor for canola.

Looking at the worldwide picture, canola production in Europe is expected to hit a new low, with production shrinking to its lowest level in a decade, Coleman noted.

“Drought last year disrupted their planting and the drought that continued into the fall forced a lot of farmers to abandon some of their planting, while leaving other fields in poor conditions,” he said. “The contribution from Europe to the world canola supply will be down next year. Europe uses a lot of canola and they grow a lot as well.

“They usually grow about as much as Canada grows, but they are going to be down to about 18.5 million tons this year.”

The oilseeds markets in general are seeing some positive price influence from the expectations of a smaller soybean harvest in Brazil due to dry field conditions.

In other canola news, Coleman just returned from the U.S. Canola Association meeting in Washington, D.C. One item discussed was finding a pathway for canola oil in the renewable diesel products. It is already used in bio-diesel but the renewable diesel is a different type of market and a market that has been emerging recently with new technologies and interest by some large companies.

“We also learned that the U.S. and Japan are starting trade talks and Canada just concluded its trade agreement with Japan and they got a reduced tariff on canola oil as a result of that,” Coleman said. “We are telling our U.S. negotiators to make sure U.S. canola gets the same type of treatment in the trade talks with Japan.

“Even though we don’t export a lot right now, there certainly is a possibility in the future to see more of a market for our canola oil suppliers.”