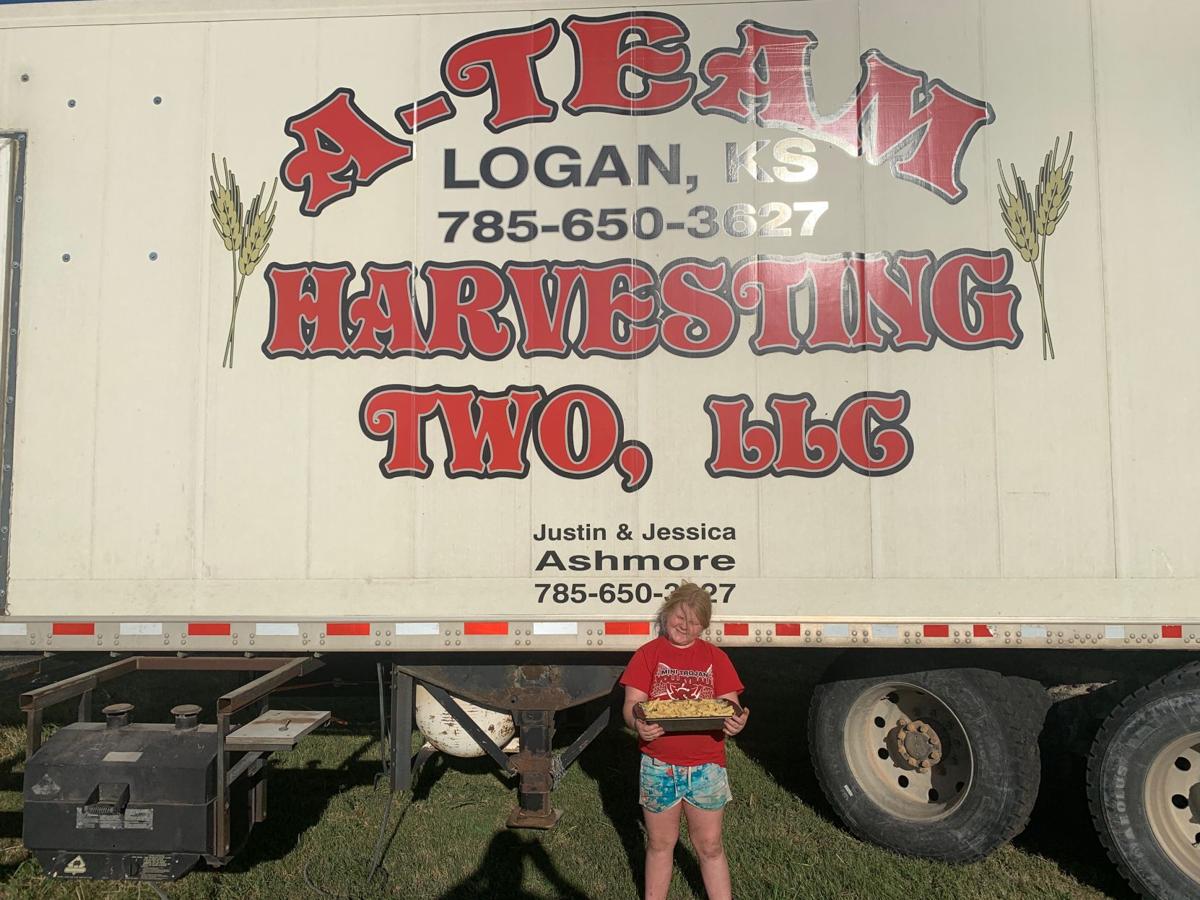 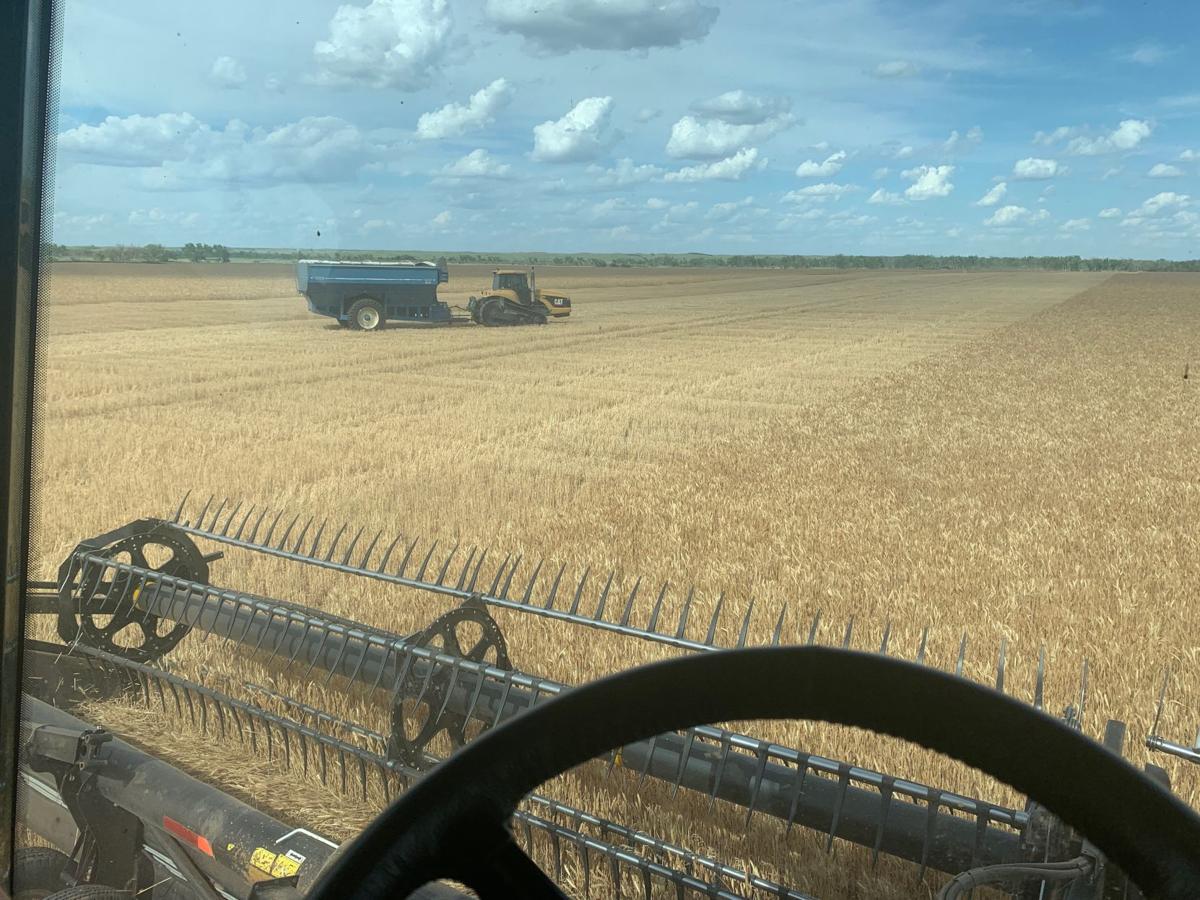 Although 11-year-old Cora Ashmore cannot legally drive a car on the interstate, she has no trouble navigating a wheat field in her Cat Challenger. She is pulling up to meet her dad, Justin, so he can dump his combine.

Although 11-year-old Cora Ashmore cannot legally drive a car on the interstate, she has no trouble navigating a wheat field in her Cat Challenger. She is pulling up to meet her dad, Justin, so he can dump his combine.

Faith, family and farming are the pillars upon which A-Team Harvesting 2, LLC were built. The custom harvesting operation started over 40 years ago with Bill Ashmore, and later, his sons Jim and Justin joined the operation. Today, it is Justin that mainly deals with the custom harvesting business, while Bill and Jim hold down the fort at home, taking care of the family farm and ranch in Logan, Kans.

Justin says, despite having a childhood defined by an extended harvest season, he had no intentions, initially that is, to follow in his father’s footsteps and live the gypsy-like life of a custom harvester. Justin attended Kansas State University, obtaining a degree in kinesiology. After graduating, he found work programing flight simulators and then experienced great success installing fiber-optics during the technology’s heyday.

“I always had that itch. I was the kind of guy that would take time off of work to go sit in a combine,” Justin said while reflecting.

Justin diligently saved all his money during his work in the fiber-optic industry, so when the time was right, he was able to buy a combine and build a grain trailer. The rest, as they say, is history.

Justin will be the first to admit, although he loves the lifestyle of a customer harvester, it hasn’t always been an easy one, especially those first few years. Custom harvesting is just another piece in the ever complex U.S. ag economy, and just like any other area of the industry, Justin has experienced years in the business where things were tight.

The life of a custom harvester is entirely dependent on crop conditions and the weather. Jobs may be lined up, but just as easily deflated due to circumstances beyond anyone’s control. Years in the business have taught Justin to improvise and simply go with the flow.

A-Team Harvesting is made up mainly of family and close friends to the Ashmores. Justin is very proud to say his three children – Colton, 17, Cora, 11, and Coda, 8 – are all integral parts of the operation. Colton operates a combine, Cora is a fearless grain cart driver and Coda is on hand to help shuffle equipment, putter around the campers and she is always down for road trips with dad when a last minute parts run is required.

“I grew up on the back of a combine and now my kids are doing the same thing. We make them grow up fast,” he said.

The A-Team’s southern run begins in southwest Oklahoma, usually around Memorial Day weekend. While there, crops like wheat, barley, rye and canola are mainly what they harvest. As the operation moves north, they still harvest small grains, but they also harvest a lot of pulses, especially in Montana and the Dakotas.

After harvesting in Montana, A-Team winds their way back home to Kansas, processing fall crops like corn, sorghum, and soybeans along the way. The season usually comes to an end for them sometime around the end of November, but it isn’t uncommon for things to stretch out into the middle of December.

That is one long season, especially considering the harvest crew usually logs 14-18-hour days in the field, seven days a week.

“We work for farmers, so we expect what they expect,” Justin said about the long hours of work he and his crew put in.

Feeding the world is actually no small task and it takes many hands to transfer a crop from the field to the plate. Justin, his three children and the entire crew of A-Team Harvesting work hard to ensure they are doing their part to help fill the food chain. As of the middle of June, A-Team was harvesting winter wheat in May, Okla., but soon their trucks, combines and campers will be headed north, chasing those amber waves of grain.