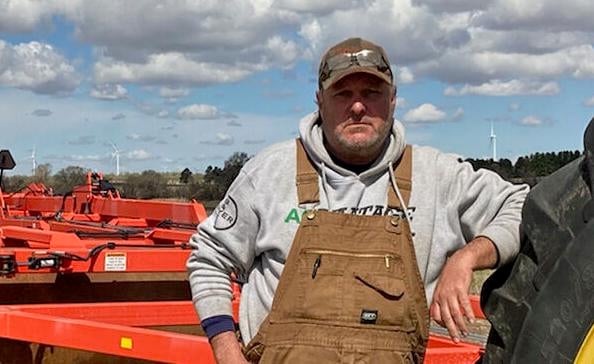 Travis Wilkens, farmer north of New Salem, N.D., stands by his land roller. Wilkens was injured and is in a leg brace. 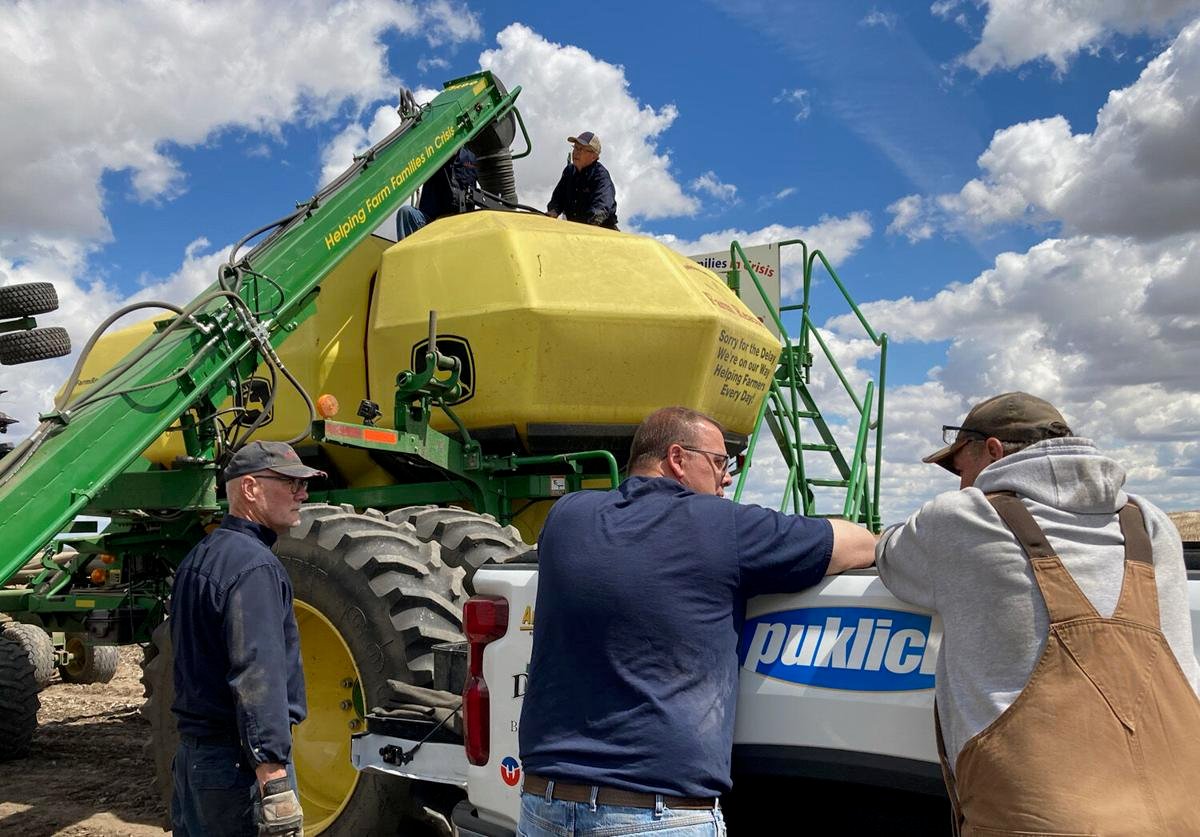 NEW SALEM, N.D. – North of New Salem, Farm Rescue volunteers were busy calibrating the John Deere no-till planting system and filling the seed cart with treated soybeans to get ready to plant for the Travis and Marcia Wilkens family.

“Farm Rescue is a good organization. There is a lot to be said for guys who come out and volunteer their time. I would say they are in the ‘hero’ class,” Travis said, as he walked around carefully in his full-length right leg brace.

For Farm Rescue, it is the start of another year of helping farmers struck by illness, disability, or natural disaster in seven states.

Over the years, the organization has turned into a well-oiled machine, with several teams of volunteers working in the seven states of North Dakota, South Dakota, Montana, Minnesota, Iowa, Nebraska and Kansas.

Farm Rescue is not only seeding for farmers this spring, but the organization is also delivering hay to ranchers affected by wildfires.

“We’ve either assisted or are in the process of helping 35 farmers with planting so far this year,” said Luke Benedict, senior field operations manager, who was helping coordinate at the Wilkens farm.

Travis tried to help volunteer as much as he could.

He explained his injury occurred when he stepped off a short ladder wrong and ripped his right quad tendon from his kneecap.

“I had surgery to fix it, but after it happened, I talked to Farm Rescue because I was still on crutches and using a walker. I told them I didn’t know if I would be able to climb into the tractor this spring,” Travis said.

Since surgery, he has been undergoing intense physical therapy. His mobility is limited, but he still wants to do as much as he can around the farm.

“I’m doing what I can and I am able to bend my knee more this week. I was pretty much just straight-legged after the surgery, and a few weeks ago, I could still only bend my knee 70 degrees,” he said.

But he was still out helping volunteers pull boxes down from where they were loaded on a truck, although volunteer Mike Wilson soon took over.

“I hate to just watch. My leg is tender, but yesterday was a whirlwind for me. Everyone showed up at once and I had to be there. I had to get the corn planter going,” he said.

An hour earlier, Travis was back at farm headquarters, getting the land roller ready to go.

By the time the volunteers arrived at the Wilkens farm, Travis was able to bend his knee better. He will need to be in the leg brace for six months, but eventually, he will have full use of his leg again.

“Every week, I am seeing progress,” he said.

Travis said he had just started seeding a week ago.

“I was kind of holding off because of the moisture situation,” he said, adding it has been mostly dry this spring in the central region of the state. But he finally had to get going because of insurance dates.

“They are adding inoculant to the soybean seed right now,” Travis said, pointing to the volunteer crews working in tandem with each other. His ND Bison variety of soybeans had been treated with a fungicide.

Travis already made arrangements for his corn to be custom planted.

“Last night, I had anhydrous put down ahead of the corn planter,” he said.

“It’s very rewarding. I get to meet and work with these families,” Mike said, adding it was his fifth year of volunteering. “It is also really enjoyable to get to work with a team of friends and we like to volunteer together.”

Mike explained they are a group of colleagues who used to work together for a number of years at John Deere.

“It is a chance to work together again with friends,” he said.

Mike started volunteering when one of his John Deere work colleagues, who had retired and was originally from Casselton, called him to talk about Farm Rescue.

“He was volunteering for Farm Rescue and a few of us decided we wanted to come up to North Dakota and volunteer with him,” he said. “As more of us retired, we kept coming up here, and now, there are quite a few of us that volunteer – all because of one individual who was originally from North Dakota.”

Mike said it has been a lot of fun “driving the latest technology” from John Deere.

While they did not actually drive the equipment when they worked for John Deere, they were aware of the technologies being developed.

“Knowing about the technologies helped us become more familiar with the big equipment and now we get to drive it,” Mike said.

Many of the volunteers grew up on farms. Mike helped on his uncle’s dairy, corn, and hay farm in southern Wisconsin when he was growing up.

“Of course, this is very different from what I grew up with. Machinery was smaller at that time and the technology has changed,” he said. “The technology makes it easier to run the machinery.”

Mike worked with fellow volunteer Steve Satterthwaite, also from Illinois, and were joined by Glen Biederman from Kansas City.

Farm Rescue used to borrow equipment from John Deere dealerships to plant and harvest with, but the organization now owns two John Deere air seeders, row crop planters and air carts, along with other equipment, all of which is currently being used to help farmers in need.

Zeorian Harvesting and Trucking prepares to hit the trail

June signifies the end of school and the start of summer vacation for many, but for Tracy Zeorian, the past 39 Junes have meant wheat in the s…

While much of the southwestern and south central regions of the state, along with a small area in the northeastern region, received needed rai…

Travis Wilkens, farmer north of New Salem, N.D., stands by his land roller. Wilkens was injured and is in a leg brace.