Bruce Ankerbauer (left) and his son, Bryan, walk with their North Dakota Farm Management instructor Lynsey Aberle, who works out of Dakota College of Bottineau, at the farm near Bowbells, N.D. 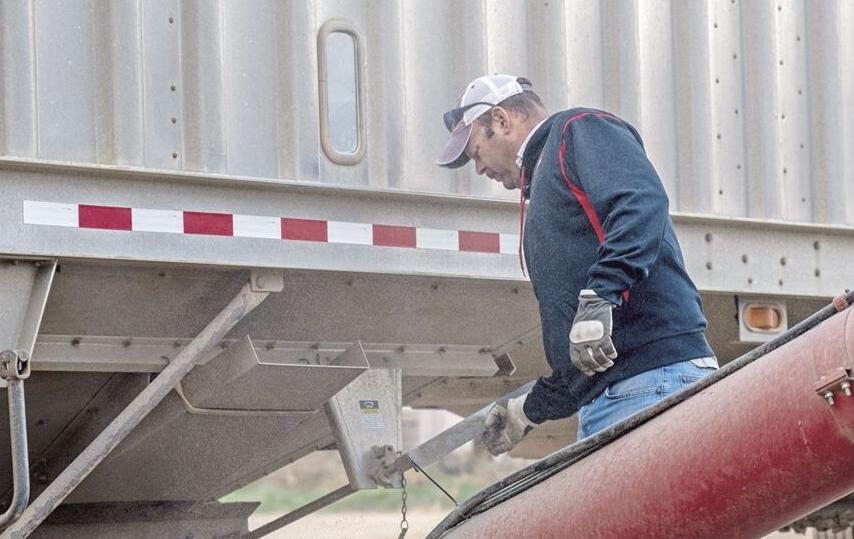 Shane Tellman, who farms near New Salem, N.D., works in the early morning on the farm. 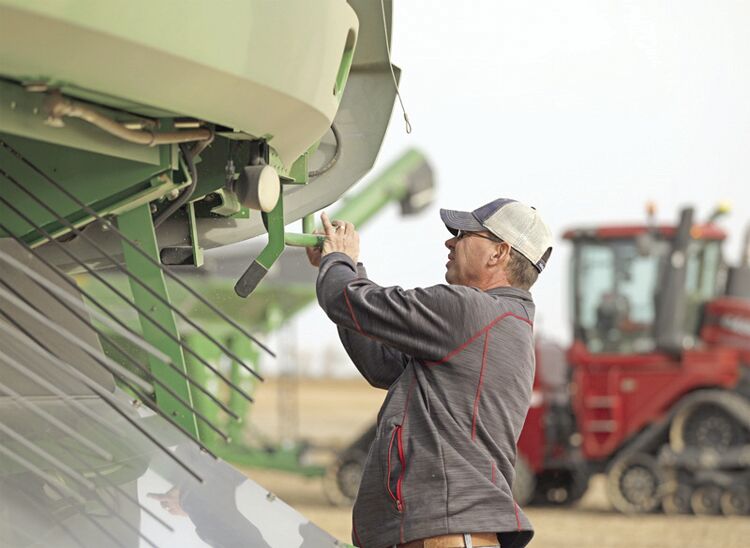 Bryan Ankerbauer works on farm equipment. He and his dad, Bruce, both take part in the North Dakota Farm Management education program.

Bruce Ankerbauer (left) and his son, Bryan, walk with their North Dakota Farm Management instructor Lynsey Aberle, who works out of Dakota College of Bottineau, at the farm near Bowbells, N.D.

Shane Tellman, who farms near New Salem, N.D., works in the early morning on the farm.

Bryan Ankerbauer works on farm equipment. He and his dad, Bruce, both take part in the North Dakota Farm Management education program.

Many granddads, dads and the next generation across the state have all taken part in the program because they want to keep up to date with their operations. They also want to be able to make the right management decisions so they can be successful in their agricultural endeavors.

Why do producers enroll and what do they get out of it?

Shane Tellman, a fifth-generation farmer near New Salem, N.D., always planned to come back to the family farm after college. It was a dairy farm when he was a kid, but now he grows several crops, including: wheat, barley, sunflowers, soybeans, corn and canola.

“I (came back to the farm) because I couldn’t see any other way of life. I guess some of the best lessons I learned from my Grandma and my Dad on the farm were respect for the animals, the land, and (having) a good work ethic.”

Shane enrolled in the farm management program several years ago, wanting to become more involved in the accounting of the farm and to find out where he was actually at financially.

The program turned out to be a benefit to him and helped him explain the financial part of the operation to his wife and kids. His wife did not grow up on a farm and he was able to show her on paper where they were at financially with their operation.

“I was able to show my wife a little bit better how we are making money and where the money is actually going to with farming,” he said. “A lot of it has to do with your equity rather than your bank account. When you can pull that out and look at that whenever you want to, whether it is monthly or yearly, you know you’re going in the right direction and that you are building equity and net worth for the future.”

Bruce Ankerbauer, who farms/ranches near Bowbells, N.D., has been in the program for more than four decades.

His son, Bryan, who has his own farm near Bowbells, has been in the program since 2001. He is a director on the Farm Credit Board, and raises several crops in rotation, including: peas, barley, durum, spring wheat, corn, soybeans, flax and canola.

Bruce works with his other son to run a cattle operation and raise some crops.

Both Bruce and Bryan have the same instructor for the North Dakota Farm Management education program, Lynsey Aberle, who works out of Dakota College of Bottineau.

When Bruce returned from the Army in the late 1970s, he started farming and ranching. At the same time, he began taking part in the program, as many young producers were doing after their tour in the military.

“Quite a few young guys that has just come home from the service were in agriculture near Max, Douglas and Kenmare and all over the area came to the program and it was fun,” said Bruce, who started off farming by renting a neighbor’s land.

Bruce grew into the program even as he was growing his own operation.

“The program makes you want to make sure you do bookwork, which wasn’t one of my strong suits as far as getting things done,” he said. “But, you know, it has really helped me to keep the farm. I’ve been able to get expenses and stuff in line with what you should be doing. It is a good program.”

Bruce has really enjoyed working with all of his instructors down through the years, including his current instructor,

“She has got such an upside of the numbers and how to get them plugged into our farm program. She’s great to work with. We can either go to Minot or she will come out to the farm or to the home, and we’ll go over the books and get things figured out,” he said.

Bruce said he has been lucky to have two sons in agriculture.

“I have two boys that are interested in farming, and one is basically into the cattle. He also has another business in town, but he’s the livestock person. Of course, Bryan is involved with the farming part, and he has done a great job of doing everything on his own, taking over his own operation,” he said. “Not everyone is fortunate to have children who want to take over an operation. It is interesting when you have young ones in your own family who want to do the things that you do.”

Aberle says there are no two producers that are alike, and her teaching is fluid that way.

While the program starts – and ends – with finances and making management decisions, there is so much more that producers gain from being part of the program.

“I think it’s important for everyone to know that our job as a North Dakota Farm Management instructor is not to tell producers how to farm but to help them become better record keepers and to educate them on what their numbers actually mean from a financial standpoint,” she said.

She feels her job as an instructor is to “truly understand what each person needs from the program and how we can best fulfill that need.”

“It’s very important for producers to know that what you put into the program is what you get out of it,” she said.

Aberle works to help her producers begin a record-keeping system, as well as putting together balance sheets and preparing cash flow plans. She also conducts a year-end analysis with all her producers.

“This helps them learn what type of information is needed for good records,” she said. “The analysis is our teaching tool, so that we can help them see where their strengths and weaknesses are at within their operation.”

That leads to better management decisions, and the information is useful for tax preparation and the producers’ lenders.

“I personally love seeing producers succeed and if I can help them understand their operation from a different viewpoint and see them think in a different way from when they started, then I know I am doing my job,” she added.

Bryan Ankerbauer said he has benefitted from being part of the North Dakota Farm Management education program.

He has an interesting story about purchasing his first piece of land – believing he is farming today partly because some older guys stepped aside and let him bid on some acres.

“Why am I farming? I guess I’m farming because God made it so I could,” he said. “When I first bought my first piece of land, I went to an auction sale and there were about 12 people there. I was the youngest guy in the room that was bidding on the land, and one of the old guys said, ‘Let the young man farm.’”

Bryan was excited to be able to purchase his first land, even though he had planned on being a teacher. Because other farmers knew he was looking for land, they let him know.

Bryan likes the Farm Management education program for several reasons, including being able to “benchmark” his numbers against averages.

All information given to instructors is completely confidential. Statewide numbers are used as averages to help producers see how they compare across the state.

“It is great to just to be able to look at my numbers each year and then have somebody else look at them, as well, and give me a good idea of how my year went. The program also keeps track of your numbers for every year that you’re in the program,” he said.

Bryan also enjoys following trends in agriculture, because it helps him understand where his farm is trending.

“That helps me to understand where I’m trending, where I can get better, and what I can do better in order to keep the farm in a good operating manner,” he said.

He also talked about how margins on the farm have gotten tighter.

“The margins have always gotten tighter and tighter in farming. When you understand where your margins are and what you can afford to do and not do a year in and year out, as far as purchasing equipment, you know where your costs need to be on a chemical side, fertilizer side and other costs,” he explained.

Bryan said it is a good idea for farmers and ranchers to know where they are at financially and what they can and cannot afford to do.

He summed up why being part of the program is a good idea for producers.

“Farming is a tight margin business and most of that is just a function of the more recent times. We have had kind of a lull in marketing prices, which makes it just more of a challenge because year in and year out, you just always never know what Mother Nature is going to throw at you,” he said. “So there is always the challenge of just the unknowns and the risk that we have to take. It’s a lot of investment every year to put a crop in and then to get that money back out of the lot of it is not always easy.”