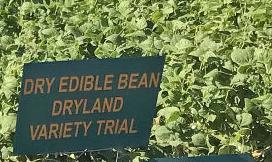 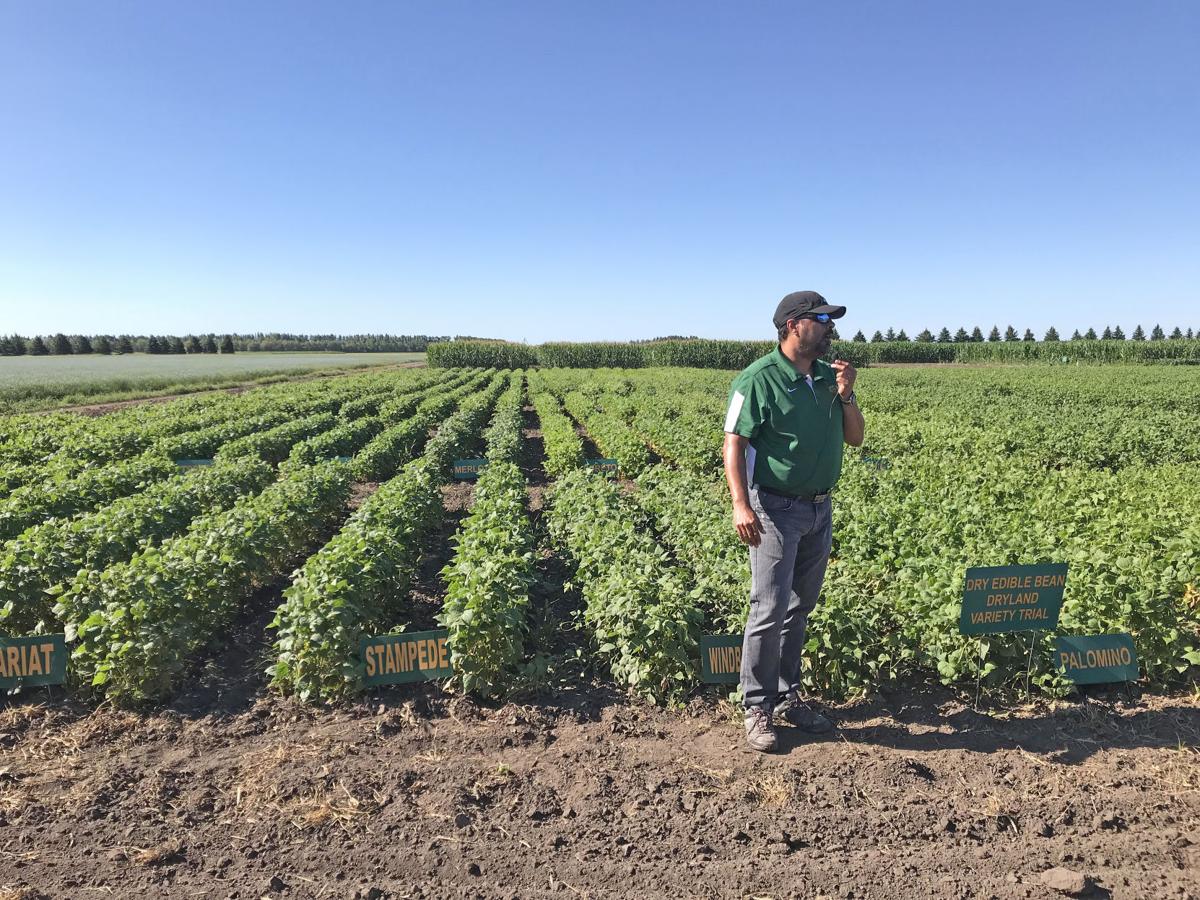 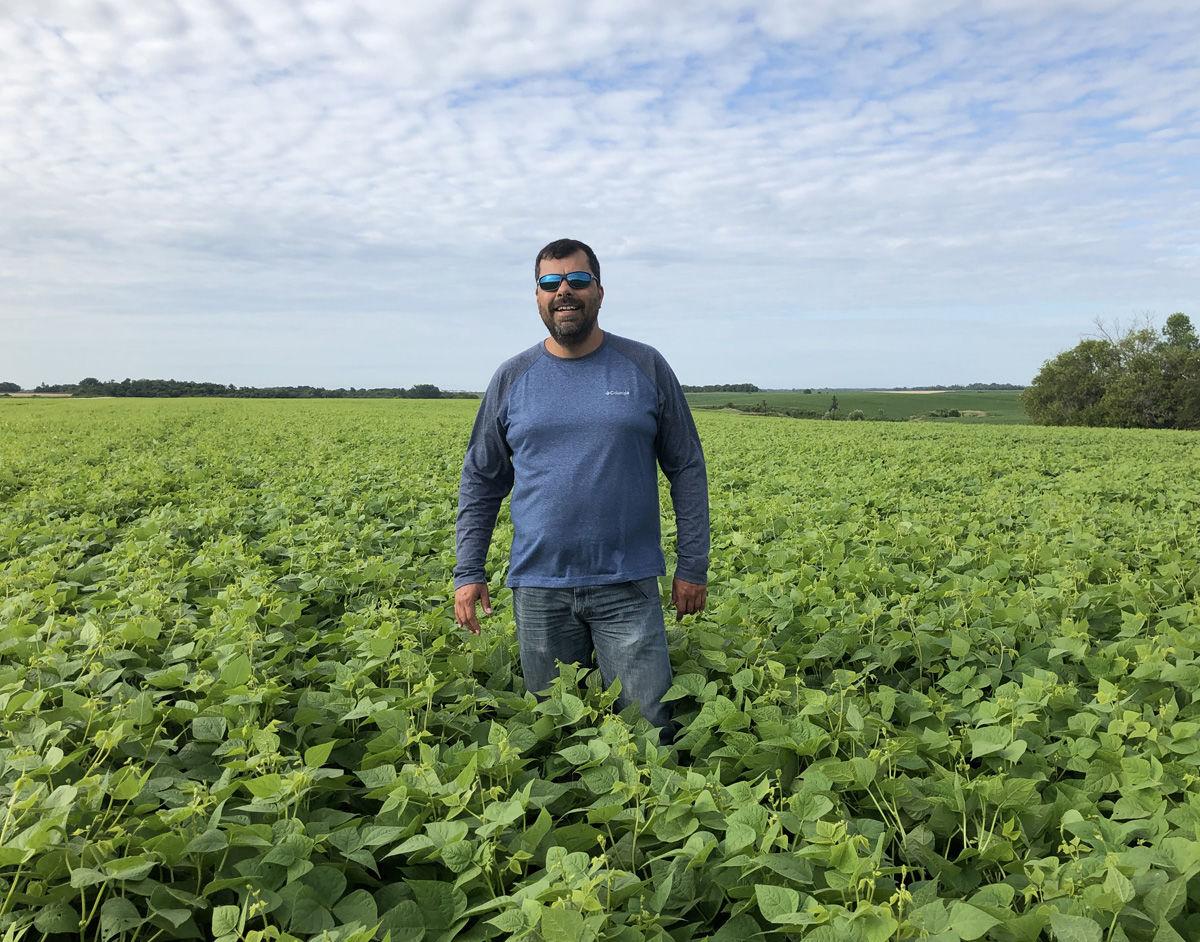 Juan Osorno, NDSU edible bean breeder, stands in a field of ND Falcon, which will be available to bean growers this year.

Juan Osorno, NDSU edible bean breeder, stands in a field of ND Falcon, which will be available to bean growers this year.

Excitement is brewing for black bean growers in North Dakota.

“The new black bean is called ND Twilight, and the North Dakota Ag Experiment Station released the bean in January,” Osorno said. Osorno is the only public bean breeder serving both North Dakota and Minnesota, including the Min-Dak (eastern North Dakota/western Minnesota) region.

It is the first black bean since 2004, when NDSU released Eclipse. Most of the dry bean acreage in the state is currently planted to Eclipse.

Black beans are often named after color, such as Zorro, the black super hero, and Eclipse, which is dark.

Minor market classes such as pinks, small reds, and Great Northern beans claim some 10 percent of the acreage.

“Most of the beans in the state are grown in the northeastern corner, with Walsh County having the highest bean acreage,” he said.

“On his farm, we have variety trials with all the dry beans on his farm, with the exception of kidney beans,” Osorno said.

“The commodity group, the Northarvest Bean Growers Association, composed North Dakota and Minnesota growers, supports our research and breeding efforts, and I enjoy working with the MinnDak growers in that group,” he said. “We have a commitment to them.”

Osorno thinks of himself as an “applied scientist.”

“There is the science part of bean breeding, but for me, it is also the fact that my job has an impact on the growers and the economy in the region,” he said.

Growers often visit with Osorno about what they need in a dry bean.

“I love having my variety trials and breeding nurseries on a farm in a grower’s field, because I am growing my beans under the same conditions as the growers are,” he said. “When I am there working on my trials, a lot of times, growers show up and visit with me, letting me know what is on their minds.”

Osorno says yield is the most important item that growers are looking for in any particular dry bean.

“Yield is where the money is. You can have the greatest traits in the world, but if the yield isn’t there, it doesn’t mean a lot,” he said.

Secondly, grower-friendly traits, such as the right shape and size of the bean, are important.

Harvest ability to straight-cut is also a main requirement for breeding a bean.

Growers seem to be changing to a different harvesting method, unlike 15-20 years ago.

“Now everyone is straight-cutting their beans. For that, you need a bean that is more upright,” he said. “The old type of bean would be lying on the ground, waiting to be picked up.”

To be upright, Osorno breeds beans that are more like a soybean. ND Twilight was bred to be that upright type of cultivar.

Producers also want to be able to use a ‘one-pass’ system with beans to save time, fuel, and labor.

In some cases that lends itself to both a no-till and minimum-till system.

“Growers are using both, and it seems Minnesota growers are huge on no-tilling or at least, minimum-tilling,” he said.

Each year, Osorno evaluates material from around the world as possible sources of resistance to white mold, rust (which is only showing up in the end of the growing season), root rot, anthracnose, virus, and bacterial diseases.

“We used to have a really good gene for controlling races of rust eight or nine years ago. But now that is being overcome with new races,” Osorno said. “We had to start breeding for new genetics and this year, a new pinto bean has been released with resistance to rust. The name of the bean is ND Falcon.”

ND Falcon was so-named because the bean has stripes similar to the bird, with names for pinto beans often following the cowboy (and wide open spaces) motif, such as ND Falcon and ND Palomino.

In addition to rust resistance, ND Falcon has resistance to soybean cyst nematode.

“Soybeans and dry beans are distant cousins. So it is not surprising, the same common diseases show up in both,” he said.

If producers grow dry beans in a field that had previously had soybeans affected with soybean cyst nematode, they will probably have it show up in their dry beans, as well.

The pinto bean also has good upright architecture and is a good high yielder.

ND Falcon is already being sold as certified seed, and the seed is available this year.

“ND Palomino is a group of pinto beans that contain a special natural gene in its germplasm that delays darkening of the bean,” Osorno said. “Before this bean came out, when harvest was delayed, the bean turned darker in appearance. They could be good fresh-harvested beans, but the beans wouldn’t sell because of the color.

Even with a delayed harvest (what happened in 2019), growers will now be able to sell their beans for the same price at the elevator.

Some companies have said they like the bean and will buy them, and others still want the regular pinto beans. So it is not a cure-all.

In addition, elevators have to be careful not to mix these different pinto beans together.

The whole food chain is still transitioning into the new bean, and trying to figure out how to use the new technology.

“We also found out that ND Palomino pinto beans also cook faster, so that also takes transitioning in the food industry,” Osorno said.

Because some companies complained, a company decided to prove the bean worked. The company took the ND Palomino beans and the regular pinto beans to the grocery stores, and asked consumers which ones they would buy.

“The consumers liked the slow darkening ones, the ND Palominos,” he said.

In 2018, some 20 percent of the industry was already accepting and using the ND Palomino pinto beans.

“It is all about options. If you are a farmer and you have a field with history of soybean cyst nematode, you will probably choose to grow ND Falcon to be safe with your yield, and not ND Palomino,” he said.

Kidney beans are often named by their relation to color such as white kidney, or dark red kidney bean.

The navy beans are either named by color or by a nautical theme, such as Navigator and Avalanche.

“Most of my breeding efforts go to pinto beans, black beans, and navy beans, in that order,” Osorno said.

Osorno’s dry bean breeding team grows a potential line in the greenhouse, separated into bean categories. Then the line, if promising, goes into the field trials at various levels of selection.

One potential variety might do really in one location in the target region, but not in others. That’s why there are several locations for dry bean breeding trials, for several years.

“We might find that one year, one line or one cross did really well in one location. But that is not good enough information to say, ‘okay, let’s go ahead and do it.’ We want to make sure that the same variety is stable and predictable in our target region, and in several locations in that target region,” he said.

The places in the state that Osorno’s variety trials are located in include: Nesson Valley east of Williston, Minot, Carrington (early generation material is also put at this location for evaluation and selection, as well as field variety trials), Langdon, Oakes, and Hettinger.

“NDSU Research and Extension Centers handle those locations, but my team handles five locations, mostly in the Red River Valley and two in Minnesota,” Osorno said. “We put a lot of miles on our trucks in the summer time.”

Last year was not a good harvest year for many crops in the state, depending on location. That was also true of dry beans.

In fact, Osorno was only able to harvest 50 percent of his trials due to too much moisture in the fields during harvest.

Heavy moisture can change a bean’s appearance in the field. Sometimes, beans can be put in the dryer bin and taken down to 14-16 percent moisture, but last year, the moisture was excessive.

In more normal-type years, Osorno believes dry beans could be grown on dryland fields in the western part of state.

“Dry beans are more water-efficient than some other crops, and beans don’t do well under high-water conditions, especially during emergence and establishment,” he said.

North Dakota exports about 20 percent of its U.S. production, and 80 percent stays in the U.S. for domestic use.

In the past, Washington and Idaho used to be bean-growing country, and then it shifted to Michigan.

In the 60s, a North Dakota progressive grower wanted to try growing beans, and that started it going. By the 1990s, the state became the number one dry bean producer in the nation.

“The dry bean breeding program in North Dakota was started in 1991, and was one of the first in the country,” he said.

Osorno dry bean team includes: Jody Vander Walle, who has been lead field tech for nearly 40 years, along with John Posch. Dr. Kristin Simons is Osorno’s research assistant. Several students help in the fields with the summer trials, as well.

Osorno also teaches basic genetics to undergraduates, so is also a professor at NDSU.