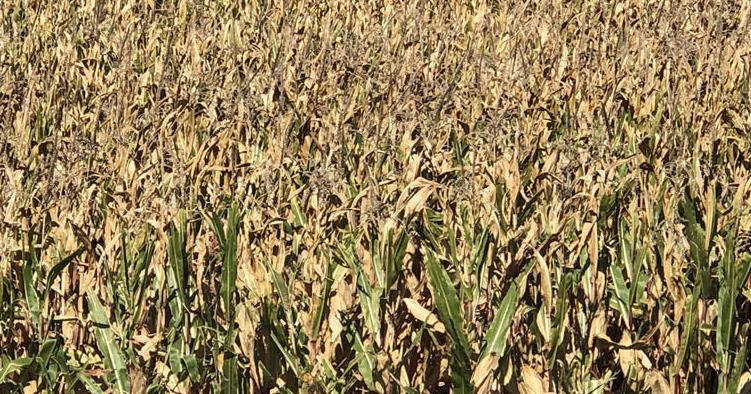 This corn was nearing maturity on Sept. 24 near Wheatland, N.D. 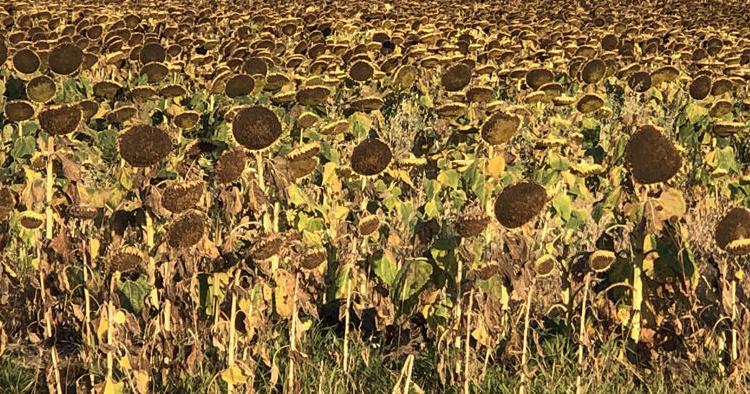 Sunflowers were beginning to drop heads near Regent, N.D., on Sept. 28.

Soybean harvest got started in late September, with combines being spotted cutting beans in both the eastern and western regions across the state.

As of the final week of September, flax and dry beans were nearing the finish of harvest, while corn harvest was just getting started.

Corn is also 41 percent in fair condition with 65 percent mature and 9 percent harvested.

Sunflowers bracts are turning brown at 57 percent across the state and sunflowers are 25 percent in good-to-excellent condition.

Some very warm afternoons have continued, with highs in the 80s and light rain reported in isolated areas.

In the western side of the state, in McKenzie County, Devan Leo, NDSU Extension agent, said they had a light first frost on Friday, Sept. 24.

The soybeans and corn in McKenzie County are golden and getting ready to be cut.

Irrigated soybeans are averaging four beans per pod, with about 40-45 pods per plant, but the dryland soybeans, which is what McKenzie County has most of, are looking “pretty tough.”

“They are going to get a harvest off of it, but with about two beans per pod, they are lucky to get 20 pods per plants. A couple of guys cut their dryland soybeans and plan to feed it to their livestock,” Leo said. “The dryland guys are taking a hit either way.”

Leo said sugarbeet harvest has started in the Yellowstone Valley.

“Our sugarbeets tend to be hardy in drought conditions and they are all irrigated anyway, so it should be a good crop,” Leo said.

Across the state in the Red River Valley, American Crystal is reporting a good crop and harvest so far.

Sugarbeet harvest in some areas is expected to be delayed a week or so because warm temperatures are not conducive to storage of the crop, according to Joe Hastings, general agronomist for American Crystal Sugar.

In Cavalier County, Anitha Chirumamilla, NDSU Extension agent, said one light shower fell over the last couple of weeks, but it was not enough precipitation to interfere with harvest more than a short while.

Chirumamilla said some canola was still in the swath when it rained, so it may have taken longer to dry after the rain.

“It hasn’t really affected any harvesting going on,” she said.

Producers have been receiving from 1,200-3,500 pounds per bushel for canola, so yields are “varied” depending on the amount of rainfall received throughout the growing season.

Soybean harvest has also started in the county.

“The soybeans did well, with the pods all the way to the top of the plants nice and mature. Some plants were a little shorter than normal from all the drought we had,” she explained.

Cavalier County did not get the frost that many areas in the state received during the middle of September.

Dry beans, of which most are pinto, are also developing well.

“I have seen a few farmers harvesting dry beans,” she said.

The sunflowers in Cavalier County are looking “beautiful,” according to Chirumamilla.

“It is a very good crop and they will have good yields if the birds don’t get them. Blackbirds are usually a huge issue, but I haven’t seen many this year,” she said.

However, she has been receiving calls from producers asking about noisemaking devices for the birds, so they may be coming in.

“In spite of the drought, we are doing pretty decent here with all our crops,” she added.

“The recent rains probably helped soybeans more than any other crop, coming at the right time to fill pods,” Maddock said. “But time will tell with the corn as to whether the rain helped or not. It might have come too late.”

Maddock said because it was so dry during the corn’s development stage, cob size might be down this year.

Soybean producers are also starting to harvest in her county.

“They are just starting to cut soybeans (last few days in September), and probably some corn, as well,” she said.

The crops suffered through significant drought all summer, so Maddock said she was anxious to see how the yields would come out.

She said corn fields are varied, with early-maturing corn developing quicker than anyone expected it to because of the heat and drought conditions.

“There are other corn fields I don’t think people will be touching for a while,” she said, adding there are fields that are still green in some areas.

The potato crop in the state is not doing as well as past years due to the drought. However, recent rains in the first half of September seemed to help.

Potato condition is 59 percent fair and 20 percent good. Some 48 percent of potatoes are harvested, behind last year, but ahead of the average.

In McKenzie County, Leo said the little bit of rain they received in September helped with some fall pasture green up.

“We have had cattle out on pastures all summer, and the cattle have pretty much been eating dry grass,” she said.

There was very little green on the pastures through the summer.

“The pastures are tough, and I feel like we are at the end of a 7-year cycle. The spring green up was not as lush as it usually is,” Leo said. “Typically, every 5-7 years, we see this cycle. All of a sudden, we are seeing a dramatic yield loss in our pastures. Every year, there is a yield loss if you use your pastures heavily, but now we have had this yield loss for the last four years.”

Leo said the reason is the pastures have been “used and abused for the last several years and now we are in a drought year.”

“We should have been taking cows off early and letting the pastures regrow,” she said.

The pastures need to rest for at least a summer, if not a year, and she says producers should start to rotate their seasons instead of always going to the same pasture at the same time each year.

“I would recommend to start changing it up a bit. When you hit the same pastures at the same time each year, you end up killing off all the cool season or all your warm season grasses, depending on the pasture. Pastures need rotations,” Leo said.

County agents are still checking for nitrates and sulfates in the water.

Rainfall stalls harvest during the second week of October

North Dakota harvest was starting and stopping during the second week of October as more rain showers impacted the state. Rain from 0.5 inches…

Soybeans have taken the main stage among North Dakota commodities this year as another soybean crushing plant could soon be a reality in the state.

With spring coolness in 2021, followed by severe drought and heat stress in June and July, this year’s crop has a lot of variation – based on …

This corn was nearing maturity on Sept. 24 near Wheatland, N.D.

Sunflowers were beginning to drop heads near Regent, N.D., on Sept. 28.