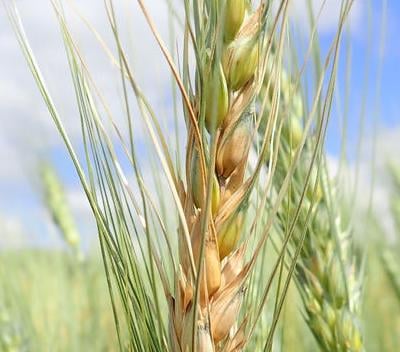 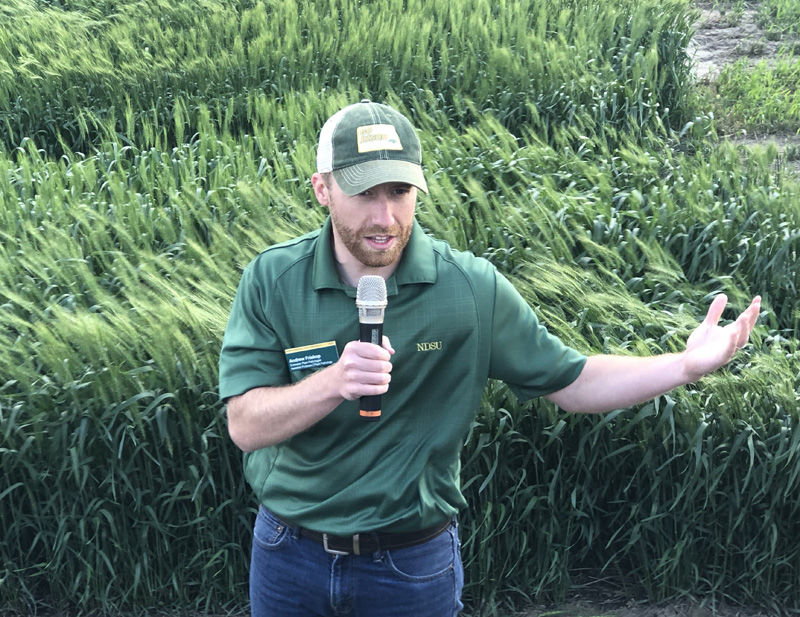 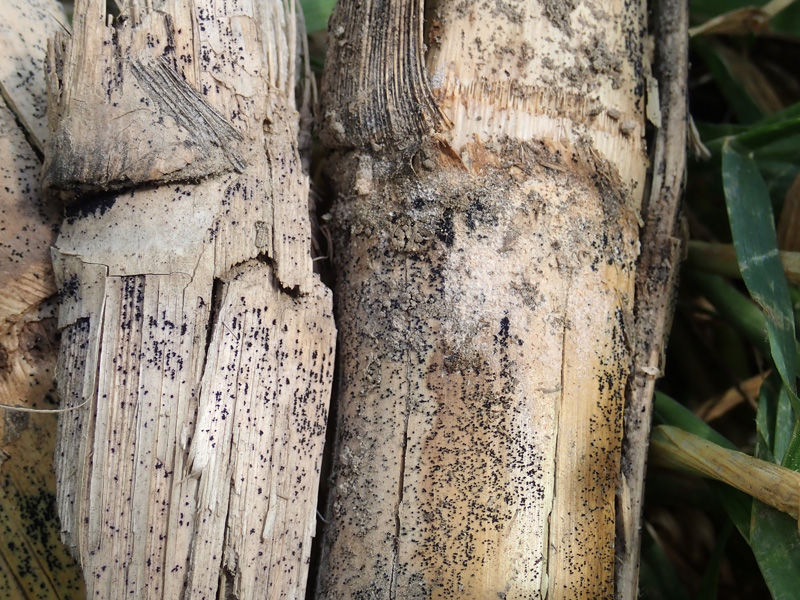 Rain was starting to sprinkle as Friskop started his presentation outdoors, that quickened to a steady rainfall before it was over.

“I drove across the state today, and we are at the time when we start worrying about Fusarium head blight (FHB),” Friskop said. “We definitely have a scab year whenever you have frequency of rain and high humidity at the end of June going into July - that is a recipe for how the fungus works.”

Near the cereal grains, the Fusarium head blight (FHB) spores overwinter in the corn and small grain residue, waiting for the right conditions to be released. Even a drought year can be risky for FHB, allowing the pathogen to survive.

“The residue is releasing millions of spores each time you look at it, and then all it needs the right conditions, which are high humidity and rainfall at the right time,” he said.

Both a national and a state risk model can be accessed for FHB. These are prediction models and don’t necessarily mean FHB will occur, but will show the risk for FHB based on varietal susceptibility.

The state model uses the NDSU Small Grains Disease Forecasting Website from NDAWN data. By July 7, far southwestern region had the most risk of all cereal grain-growing areas in the state.

“For scab management, we need an integrated model. Whenever you grow a susceptible variety, think of it as starting behind the eight ball,” Friskop said. “In the worst scab years, we can’t spray our way out of a scab year.”

Friskop said there are some very good spring wheat varieties with some moderate resistance to scab – but there is less resistance in the durum varieties.

“With durum, we are just not there yet,” he added.

Variety does have a lot of influence on FHB control. Every year, Friskop works with Andrew Green, NDSU spring wheat breeder, or Joel Ransom, NDSU Extension agronomist, on management of diseases and breeding the varieties with enough resistance to help producers fight scab, as well as other diseases.

With the high humidity in 2019, the risk continued in the southwestern region, as well as the southeastern regions, and other pockets in the state. Producers considered spraying fungicides and most did.

“Timing and what fungicides to use are the most important aspects to this,” he said. Friskop said producers should check the varieties growing out in their field. If it is a susceptible or moderately susceptible variety, applying fungicide at the correct timing can be critical. “When the yellow anthers appear on the main stem – that’s the best time to spray.”

However, it is better to spray a little late than too early.

Over the last five years, studies at NDSU have demonstrated that seven days after early flowering is a better time to apply fungicides than spraying too early.

“Good control of vomitoxin that way is about 50 to 60 percent,” Friskop said.

“This year, we will have a new fungicide, Maravis Ace SE,” he said. “We have tested it for two years and it is offering similar control as Caramba and Prosaro. It is going to be another good one for the arsenal at early flowering or a little later.”

“Maravis Ace is a fungicide with mixed modes of action, and most of the suppression is coming from an SDHI included in the premix,” he said.

The 2018 guide to fungicides in North Dakota can be found at https://www.ag.ndsu.edu/extplantpath/publications-newsletters/2018-fungicide-guide/Fungicide%20Guide%202018.Final.pdf/view.

In North Dakota and border cities with Montana, NDAWN forecasts the risk of small grain diseases at https://www.ag.ndsu.edu/cropdisease