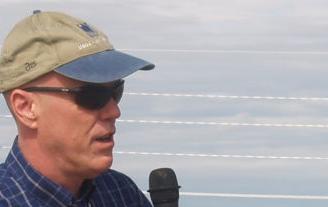 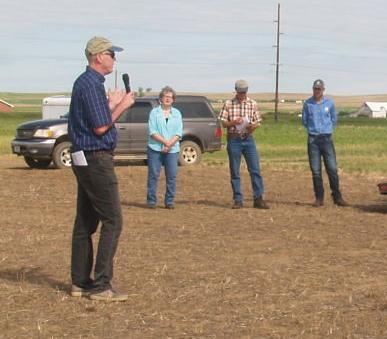 Producers are finishing planting their spring crops. But scouting the crop for insects and diseases will go on for the rest of the growing season.

Many producers believe there could only be grasshopper outbreaks during a drought, so they don’t think they need to scout for grasshopper nymphs in the ditches if it has been cool and rainy.

That is not always true.

When grasshoppers damage range and cropland, it can be economically devastating.

“When grasshoppers are abundant on rangeland, the insects will often weigh more than a cow and remove more forage than a cow,” said Dave Branson, ARS research entomologist. “So they can really have an impact on grassland systems.”

The overall forage damage to grasslands can easily total $1.25 billion, and that doesn’t include crop damage.

A grasshopper outbreak can move into cropland from the ditches, weedy outcrops, causing millions of dollars in damage.

More than 100 different species of grasshoppers occur in the Northern Plains, and almost all of the species overwinter as eggs.

“On crops, there are six or seven species that do all the economic damage,” Branson said. The grasshopper nymphs move into the field from the ditches to the crop edges.

Some five or six species, mostly different than those in crop fields, cause destruction in rangeland.

Four years ago, grasshopper populations exploded in eastern Montana, and actually wiped out the corn plots at the ARS center’s farm.

ARS scientists are working in the Bakken oilfield, near Williston, N.D., and northeastern Montana, looking at what happens to plants and insects when they reclaim oil pads.

“Those reclaims are getting stuck with very different vegetation community than before, as well as grasshopper species that we’d normally find in crop areas,” he said. “Those oil reclaims are a potential grasshopper problem to adjacent croplands, as well, simply because some of the grasshoppers are the type that respond to crops.”

The ARS scientists want to give producers the tools they need to intervene before an outbreak happens.

“It can be hard to predict outbreaks because grasshoppers exist over multiple areas in many different ecosystems,” Branson said. “Managers are often acting in a crisis mode, which leads to the massive spraying programs we see.”

In 2017, a natural drought occurred, which interrupted the research with drought and precipitation on grasshopper populations.

“We had to water those plots just to keep the grass alive, so it was a wasted effort,” Branson said.

One of the challenges with weather and grasshoppers is that only about 30 percent can be explained by the simple adage that dry weather equals more grasshoppers.

Many believe a cold, wet spring kills grasshopper populations, and some grasshoppers are actually drowned out by heavy rains.

“But that won’t play a part if the eggs have not hatched yet, and cold weather alone won’t kill grasshoppers because they can survive without food for several days,” he said.

When we think about climate and weather, it does have an indirect effect on grasshopper populations. More rain does increase vegetation.

“Grasshoppers or mini cows are searching for an optimal protein and there is good protein in that vegetation,” Branson said.

If weather conditions are very dry, such as in a drought, protein content in forage drops. And if that happens in summer, there is less of a window for the grasshoppers to lay eggs.

When Branson talks to producers about their grasshopper problems, he tells them to look at their forage condition in late summer before they think about spraying for control.

“If you have high protein content and high densities with warm conditions in the fall, your problems with grasshoppers are probably going to continue or expand in the following year,” he said.

If the protein content declines in late summer, and the forage is “brown and crunchy,” there won’t be that opportunity for grasshoppers to lay eggs.

“Your risk in the future is probably going to be low,” Branson added.

Early summer drought can have a positive effect on grasshoppers, and if there is rain, that increases the amount of forage.

“If there is a severe drought, such as in 2017, the protein content of forage is not there, so there will be less grasshoppers,” he said. “So if there is a drought, will there be grasshoppers? That depends.”

A moderate drought, especially early in the season, does spell an increase in grasshopper populations.

“We are trying to get a better handle on moderate drought, to understand how that impacts risk for producers,” Branson said. “If we’re trying to predict grasshopper populations, usually we look at weather and how that ties into food.”

Grasshoppers and Mormon crickets are among the most economically important pests in the world.