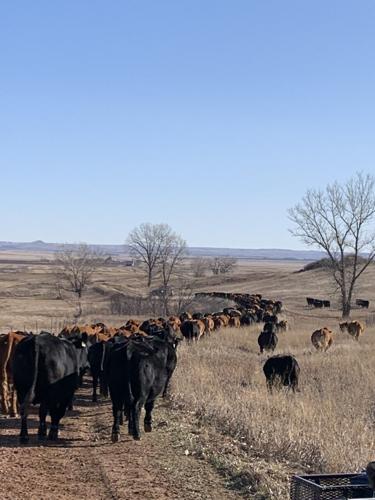 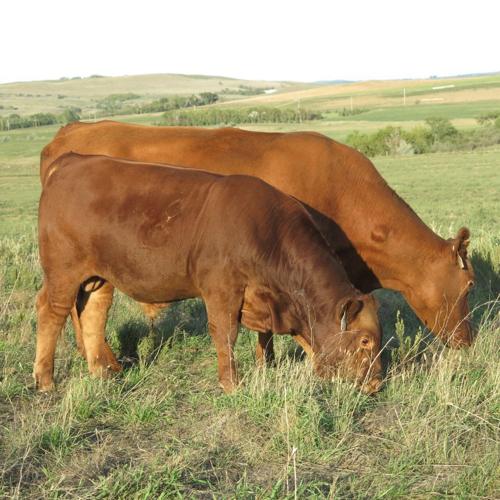 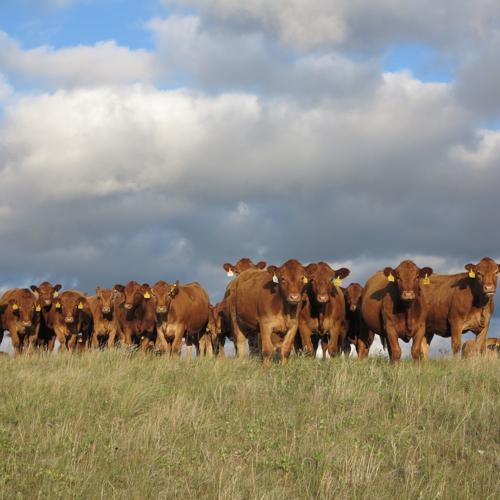 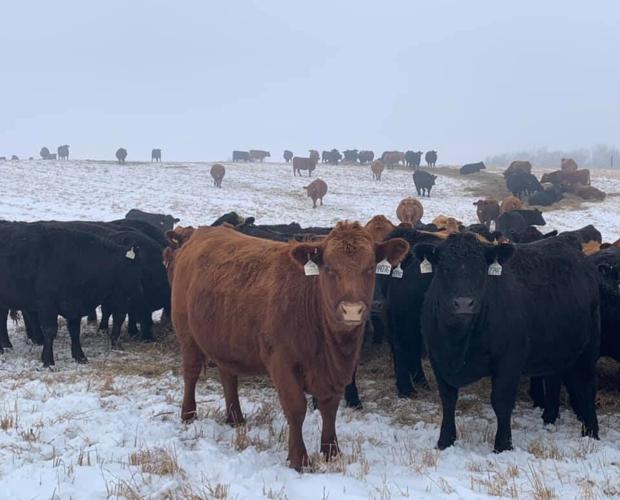 Gustin’s Diamond D Ranch is proving that Gelbvieh cattle do well on both sides of the Missouri River.

Half of this long-standing herd is at the Dennis and Sherry Gustin farm located in the hilly lands south of Mandan, N.D.

The other half moved to the flat cropland country of the Heinrich Ranch north of Medina, N.D., when Sarah (Gustin) Heinrich married her husband, Richie Heinrich, in 2014.

The distance is only 90 miles, but the environments are quite different.

What they found is their Gelbvieh cows, sires, and offspring do equally well in both locations – and across many other cattle states, in the feedlots of Nebraska and Kansas, as well as in Canada.

The hardy cattle also made it through weather extremes. Medina experienced multiple weather disasters in the past few years – fall flooding in 2019, drought in the summer of 2021, and several feet of snowfall and blizzard conditions in the spring of 2022.

“We lived through 2-3 blizzards in the spring of 2022 and were very fortunate,” Richie said. “We calved early so the calves had some age on them and weathered the storms. We were able to hold everything together and have minimal losses.”

Both the Mandan and Medina farm sites have cattle sheds and draws for protection, but many of the heifers and cows still prefer to calve outside, Sarah said.

The operation chose to retain steer ownership in southern feedlots, and the Gelbvieh animals adapted well to the sun and heat, too.

Just 11 years after Gelbvieh cattle were introduced to the United States in 1971, Dennis and Sherry started their hardy herd in 1982.

Strong maternal traits, great performance, and docility drew them to the moderately-framed breed 40 years ago, and they are still appreciating those traits.

Dennis’ brother and sister-in-law, Al and Peggy Gustin, are actively involved in the operation. Now retired from farm broadcasting, Al served as the ag voice of KFYR for many years.

At the same time, Dennis and Sherry were guiding their three daughters who all own Gelbvieh cattle today.

Richie and Sarah are active partners and the next face of the program. They live on the Heinrich Farm established in 1939 by Richie’s grandparents.

“All the breeds have emphasized lower birth weights and focused on improved calving ease,” Sarah said. “This is one particular trait where I think DNA testing and improved genetically-enhanced EPDs on bulls sold by seedstock breeders can really benefit bull buyers.”

Balancers have improved the amount of marbling in Gelbvieh crosses, she added, citing information from the American Gelbvieh Association.

“Gelbvieh and Balancer cattle have improved and increased the amount of marbling, but still provide increased muscling and a higher retail yield,” she said.

“Our customers come to us for the docility of the cows. We strive top-to-bottom to make sure our cows are tame and easy to work with,” Richie said. “On top of that, our bulls offer heterosis and added pounds. I think it is the maternal traits and the extra performance that our customers are coming after.”

Fertility, easy breed-back, milking ability, high weaning weights, and longevity are additional traits Gelbvieh exemplify. The calves are not given creep feed as the Gustins/Heinrichs want to be sure they have selected breeding stock that thrives on the dams’ milk and grass.

“We want to know how each cow performs on her own,” Sarah said. “We bring the calves into the lot, and they perform and do well. We’ve been more than pleased with the breed, and that’s why they are still here after four decades.”

The herd has done well with several Dams of Merit and Dams of Distinction. This American Gelbvieh Association classification recognizes females with above-average production and longevity.

Richie and Sarah work just as hard as their Gelbvieh cattle. Sarah is the full-time farm news director at KFGO, and Richie farms full-time while also serving as an emergency medical technician and volunteer firefighter.

Early in 2022, they were recognized as one of four farm couples to receive the National Outstanding Young Farmers Award. The program is sponsored by John Deere, administered by the Outstanding Farmers of American program, and supported by the National Association of County Ag Agents, and the U.S. Jaycees.

Improving modern livestock and crop farming every day is their goal.

Working for area livestock producers since 1937, Stockmen’s Livestock Exchange in Dickinson, N.D., had always been in Larry Schnell’s family, …

Schiefelbein: ‘Band together for greatest strength’

WILLMAR, Minn. – The Minnesota State Cattlemen’s Association was proud to welcome one of their own – Don Schiefelbein – to their state convention.