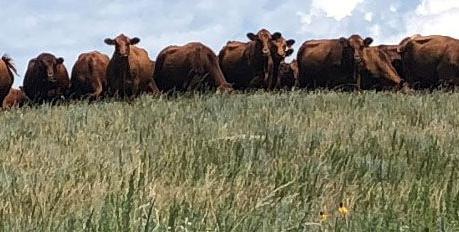 Be cautious of over-grazing pastures this fall to give pastures a chance to recover in spring. Courtesy photo NDSU. 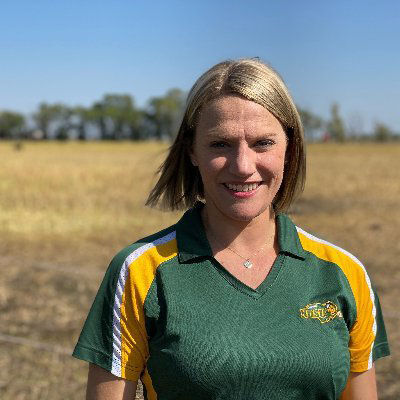 “The entire state has been impacted by some level of drought throughout the 2021 growing season, as well as in the fall of 2020,” Meehan said.

Many areas of the state were lacking in precipitation in fall 2020, particularly in the central part of the state, with the largest departure from normal moisture located in the south central portion of North Dakota (averaging 10 inches below normal).

“As we moved into spring 2021, that fall deficiency actually reduced potential for forage production,” she said. “Our cool season grasses that we have here in North Dakota start to develop their tiller in the fall before the next growing season.”

Many of the grasses aborted their tillers in 2020, so they had to start over in the spring.

The deficiency in rain continued in the spring, through the critical time for forage growth in the state. That time period is April 1 through June 30.

In July 2021, several counties in the north central region of the state were 76-100 percent reduced in range and pasture production.

“Areas in the north central part of the state were in exceptional drought by July 2021,” Meehan said.

“The big concern is we have continued to be deficient in rain from October 2020 to September 2021,” she said.

That will impact forage growth next year.

“We have gotten recent rains as you can see pastures beginning to have a fall green-up,” she said. “These fall rains should benefit tiller development on our native cool season grasses.”

Meehan said to be cautious of grazing this fall, even though the pastures may have greened up.

“Be cautious of grazing unless it is an introduced species like Kentucky bluegrass,” she said. “We don’t want negative impacts on our cool season grasses or we will be delayed in development in 2022.”

If the state receives enough precipitation through the winter of 2021-22 and spring 2022, there could be recovery to grasses.

“Unfortunately, what will happen in 2022 is really a function of what we get for winter and spring precipitation,” she said.

Meehan said there is not enough strength in the winter models yet to forecast precipitation.

The plants need to recover their root structure, along with the carbohydrates within those roots.

“We want them to be able to grow next spring and have enough leaf structure and growth,” she said.

Producers should prepare for a delay in livestock turnout to pastures next spring – especially on the native pastures.

There may be decreased forage productivity as those plants try to recover from the past two years.

“We may see an increase in bare ground, and with that, the potential for weed infestation, so we want to be on top of that and control those invasive and noxious weeds coming into our pastures,” she said.

This year, there have also been issues with water quality in the state’s ranges and pastures, which has prevented foliation.

“If we don’t have enough runoff. We are going to continue to see issues with water quality, such as high total dissolved solids (TDS) and high sulfates,” Meehan said.

Since droughts happen periodically, how can we build resiliency into our grazing systems?

Implementing some sort of rotational grazing system builds resiliency into pastures and ranges.

“We don’t want to be grazing one pasture for a whole season, which allows pastures to rest,” she said.

When producers start on their rotational grazing system in 2022, they should skip the pastures that were over-grazed, at least at the beginning of the grazing season.

“Give those over-grazed pastures a chance to recover,” Meehan said.

It is good to have a “rest/rotation” system, where one pasture is left ungrazed every year, which allows producers to have a stockpile of forage they can utilize when needed.

Another good option would be to utilize annual forages, such as full-season cover crops.

“There are a lot of shorter-season options, too,” she said. “Planting a winter cereal, such as winter wheat, winter rye, or winter triticale that can be used in the spring is another good option and provides flexibility in the grazing system.”

Another option is planting a cover crop after the cash crop so there is forage to graze in the fall.

“That gives us a little extra wiggle room within our system as we are managing that,” she said.

There are several drought water development programs available, including the Emergency Conservation Program, the Environmental Quality Incentives Program, the Save Our Lakes Program and the Drought Disaster Water Supply Project Assistance Program.

“Contact your local FSA office and see what is available,” Meehan concluded.

Be cautious of over-grazing pastures this fall to give pastures a chance to recover in spring. Courtesy photo NDSU.