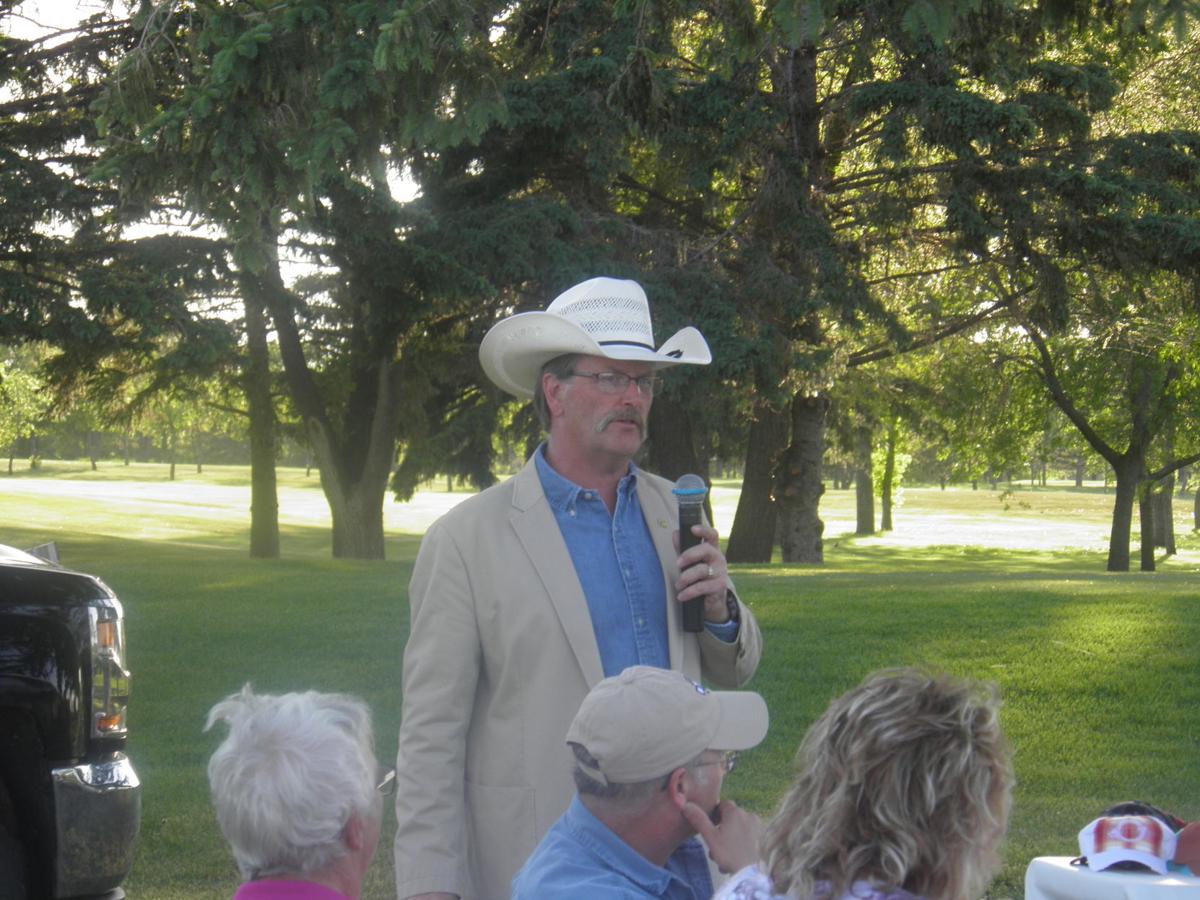 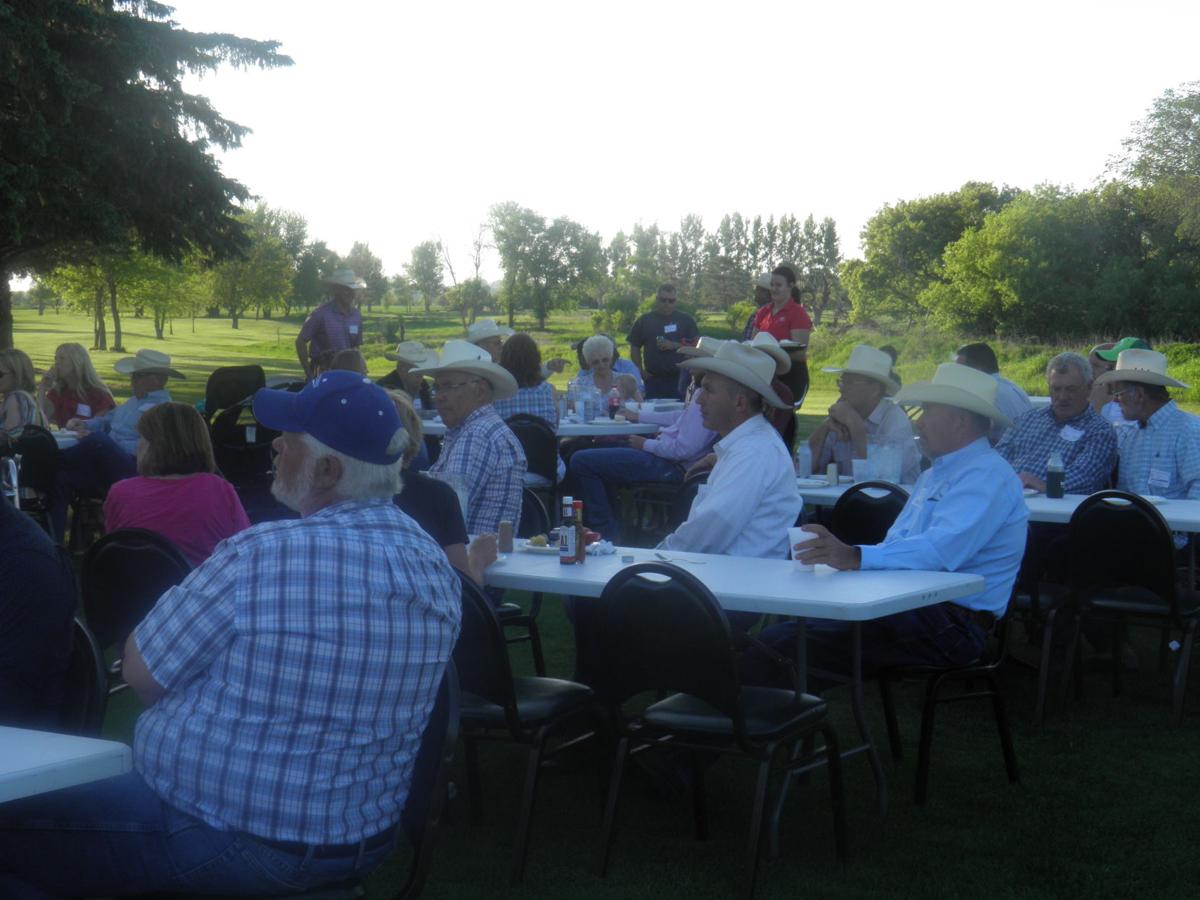 The weather was perfect for an outdoor meal and meeting at the Jamestown County Club for NDSA members of District 2.

The weather was perfect for an outdoor meal and meeting at the Jamestown County Club for NDSA members of District 2.

JAMESTOWN, N.D. – The first of six North Dakota Stockmen’s Association (NDSA) Spring Roundup meetings was held at the Jamestown County Club on the evening of June 4. The theme of this year’s Roundup meeting was “Strength in Numbers,” according to District 2 director Brian Amundson, who helped organize the evening’s program.

“The more people we can get going together, bringing opinions, whether different or the same, thinking about a common goal, finding a solution to a problem and moving forward is what we are all about,” Amundson said.

NDSA now has slightly over 2,900 members and through their “Strength in Numbers” program they aim to have 2,950 members by convention time in September.

The main speaker for the evening was Dan Rorvig, president of the North Dakota Stockmen’s Association. He started out by noting this year marks the 9oth anniversary of the NDSA and the main reason in forming the organization was brand inspection and controlling cattle rustling, which was taking place in the northern part of the state and is still a major responsibility today.

“We are anticipating brand inspecting 1.2 million head of cattle this year, and when you look at one head at a time, which is the way they are inspected, that is a major, major task,” Rorvig said.

In addition to brand inspection, the organization has four other areas of work and he brought those attending the Roundup meeting updated information in each of those segments.

This is a five-year renewal program and NDSA recently instituted a new software program to assist in this area.

This branch of the NDSA can provide information and a list of possible funding sources for projects such as feedlots and other cattle handling facilities that will meet environmental requirements. This help is available for both upgrades to a current project or for an entirely new facility.

This is a monthly publication that serves the livestock industry within the state with both editorial information and advertising by the members of production sales and other events, as well as advertising products and services directly related to livestock producers.

This is the policy making segment of the association also saddled with drafting legislation and lobbying during legislative sessions. Because this was a legislative year, Rorvig expanded on some of the recent results of the legislature.

He first pointed out that within the State House and Senate membership, 15 of those seats holders were also members of the NDSA, which he said is something they can be very proud of and it ensures the NDSA garners a lot of respect when they come to the legislative hearings.

“We are used as a sounding board and an information gathering tool,” he said.

One of the biggest disappoints for the NDSA lobbyists was the defeat of SB-2315 during this last session. SB-2315 also known as the “no posting” bill or private property right legislation. It finally failed in the House by four votes 48 to 44, Rorvig noted. The question he posed to those at the Roundup meeting was, “Should the NDSA continue to work to get this rule changed and advance the private property rights of farmers and ranchers in the state?”

An overwhelming majority said they wanted the NDSA to continue to lobby and work on the legislative level to get a bill like SB-2315 passed into state law during the next legislative session in 2021. A final decision on this matter will be decided at the group’s annual convention, which will be held in Minot, N.D., on Sept. 19-21. Rorvig encouraged members to discuss the matter over the summer months to ensure a well informed decision can be made at the convention.

They did have success in other areas. Livestock zoning regulations for feedlots are now more favorable for producers and freeze branding is now acknowledged as legal brands on cattle, horses and mules.

Currently, NDSA Foundation is working on a program to help cattle producers in Nebraska who have suffered huge losses this spring from storms. The “Nebraska in Need Disaster Relief Program” started in early April with a commitment of $10,000 from NDSA to kick start the program. Individuals were encouraged at the meeting to contribute as well. The Foundation is also in charge of scholarships and some educational programs.

The Foundation is also working on a new building for the NDSA offices. They decided on a site where they would like to build, but the negotiations to secure the property have been slow going and fund raising operations are now underway for the new headquarters.

Other Spring Roundups were held in Tappen, Killdeer, Leeds, New Town and Hebron, with a slightly different program at each location.