Read Today's E-Edition
Share This
Crops flourishing on Miller farm, but so are the grasshoppers
Share this
1 of 2 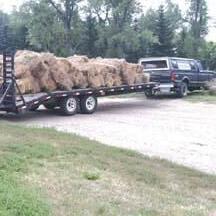 Floyd Miller with his load of hay for horses in a past photo. Floyd hasn't started haying yet. 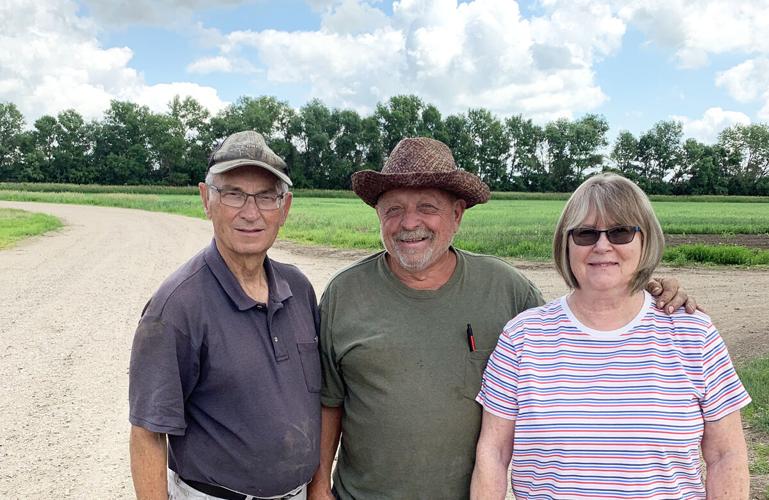 From left to right: Lowell Sandvik, Floyd’s brother-in-law, with Floyd and Debbie Miller at the Miller farm on July 5.

WILLISTON, N.D. – As Floyd Miller stayed busy finishing spraying herbicide on durum fields before forecasted rain over Fourth of July weekend, he couldn’t help but remember a jingle from school days past:

“Water, water everywhere, but not a drop to drink.”

But he switched that around to fit the scenario at the farm currently:

“Grasshoppers, grasshoppers everywhere, and all they want to do is eat.”

“There are grasshoppers all over, on the edges of fields coming in, in the middle of fields, jumping around everywhere – they are just terrible this year in some areas,” he said.

Last year, Floyd saw some grasshoppers in mid-summer, but the numbers have increased substantially this year. However, his farm is not that far from northeastern Montana where National Weather Service officials tracked masses of grasshoppers on radar in 2021.

Floyd is on the offensive and is adding insecticide to the tank mix on some durum fields. Some of the durum was planted late and still needs spraying. The fields he seeded with his Concorde drill with the shovels have a few weeds in them, but they are “pretty clean.”

“I’ve been adding insecticide to the tank mix on some of my durum to spray for grasshoppers,” he said. “Then, when I am finished spraying, I will go around the edges of the field and spray the grass.”

Floyd remembers back when his grandfather and father were building the red granary on the farm. His grandfather needed to combine some grain, but wanted to finish putting shingles on the granary first.

“They shingled for two days, and by the end of those two days the crop that he could have combined was gone – the grasshoppers had gotten it,” Floyd said. “Last year, there were some grasshoppers around here, but not many. The hoppers did, however, find one of my quarters of durum. After it headed out, they got after it.”

Floyd hasn’t checked his alfalfa fields for blister beetles yet, but counties to the south of where he farms are seeing both blister beetles and grasshoppers in fields of alfalfa.

“That is why I use a sickle mower and not a crimper in the alfalfa fields because the crimper mowers squish the beetle and it turns to poison for the horses,” he said. Floyd sells his alfalfa and alfalfa/grass hay to horse owners. If the beetles can crawl out of the hay, the hay is okay for the horses to eat.

He did see some flea beetles in canola fields in the area, but they haven’t hit his canola fields yet. Casey’s canola up north is just turning yellow.

The alfalfa on the Miller farm is barely beginning to bloom.

“I’m going to see what the rain does, and then start cutting it, a little at a time,” he said.

The longer Floyd waits to cut it, the more tonnage he will have.

“I haven’t started cutting the alfalfa/grass mix, either. Most of my customers like the alfalfa/grass hay mix, as long as it is green and there isn’t any rain on it,” he said. Floyd cuts his hay, lets it lay in the field for a couple of days, and then bales it in square bales. “They get under cover in the barn the same day.”

The durum on the farm is looking really good in some fields, Floyd says. The first durum he seeded before the blizzard is actually heading out. It is about knee-high in height.

“We have had some problems with germination in parts of some fields,” he said. “I went to an auction sale in Sidney (Mont.), and talked to some guys in the Froid area, and one guy said he wasn’t really pleased with the germination in some fields. Another guy said the same thing.”

Floyd doesn’t know why there are germination problems in some areas, but he thinks it could have been due to heavy precipitation that hit at different times in the field, causing the plants came up irregularly. But other fields don’t have that problem and are doing great.

Prior to July 4, Floyd estimated the corn in the wildlife food plots would be knee-high. He designed and constructed the food plot seeder that he seeded his food plots with.

Meanwhile, Floyd and Debbie went camping over the Fourth of July weekend at Beaver Bay in Lake Sakakawea. He purchased a lot of black metal pots at a recent auction and used them to cook beans on the grill, along with some barbecued meat.

“They shoot off a lot of fireworks over there. They are really pretty – we can see them from New Town,” he concluded.

OAKES, N.D. – It is definitely mid-summer at the Courtney farm where the corn is pollinating and the soybeans are beginning to set pods.

Floyd Miller with his load of hay for horses in a past photo. Floyd hasn't started haying yet.

From left to right: Lowell Sandvik, Floyd’s brother-in-law, with Floyd and Debbie Miller at the Miller farm on July 5.