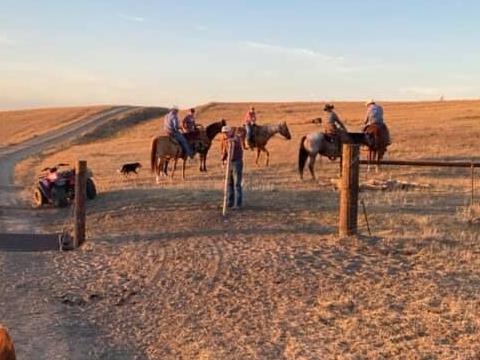 Out in the pastures with the Bests. 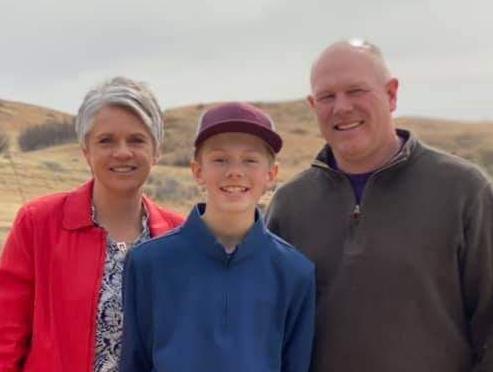 Vawnita and Pete Best with their son, Kyle.

WATFORD CITY, N.D. – In the majestic Badlands of western North Dakota where fall colors splash against the rocky, hilly terrain and registered Angus cows graze on native prairie and other grasses, Pete and Vawnita Best, along with their son, Kyle, 13, operate Best Angus and Quarter Horses.

The family raises seedstock, hardy, northern Angus bulls that can handle the climate and topography, along with mother cows and replacement heifers that stay out on the range grazing as long as possible into the winter months.

The Bests hold their annual production sale the first Monday in March at the ranch southeast of Watford City, where they sell registered Angus bulls, some registered replacement heifers, and a few Quarter Horses.

They are also partners with the Badlands Angus Alliance, and their sale is the first Wednesday in December. They will sell registered bred heifers, along with two other seedstock producers, the Strommens and Talkingtons, at Stockmen’s West in Dickinson, N.D.

The Bests work cattle with Quarter Horses on their Badlands ranch, as there are many areas a four-wheeler can’t reach. And horses can go anywhere cattle can go – and farther.

“When you are rounding up 100-300 head in the Badlands, you are not going to get there with a four-wheeler or anything else. You need a horse,” Pete said.

They breed some Quarter Horses, with the origin of the horses being a champion gift.

“My Dad gave my wife a filly, right after we were married in 1997, one he had raised. The filly came from a sire which was an AQHA champion raised by the Leonards in Rolette (N.D),” Pete said. “We bought a filly to give her a buddy down in Nebraska at the Pitzer Ranch.”

Most recently, the Bests are raising Hangin’ Tree cattle dogs, which are a mixture of seven different cattle dog breeds, and expect to have a litter by Christmas. The female is three-fourths Hangin’ Tree and the male is a full-breed.

“We are getting ready to have puppies, which should be ready around Christmas. These are darned good cattle dogs and they’re good around people, too. These dogs are like a Lab and they are engaged with your family and they want to be your best friend. They really like kids,” he said.

Best Angus started in 1996 when Pete was offered the opportunity to select a 4-H heifer out of the replacement pen at McCumber Angus Ranch south of Rolette.

His parents, Lyle and Sue Best, lived in the country on a couple acres, and while his dad was a physician at the Turtle Mountain Reservation, his grandparents and relatives were actively involved with production agriculture.

“The Bests originally came from Canada and settled in the Walhalla (N.D) area,” he said. “When my grandpa, Lloyd Best, came home from World War II, he went to veterinarian school at the University of Colorado and became a vet. He chose to start his practice in Wahpeton (N.D) and also ran about 300 cows.”

His grandpa was one of the first to bring in Charolais genetics to North Dakota, and he sold Charolais bulls.

“As far back as I can remember, I always wanted to be a rancher. I liked cattle. It was a treat when I would go to Grandpa’s place and I liked the Charolais at that time,” he said. His grandpa had health issues, however, and had to sell his cattle later, but Pete would go on vet calls with his grandpa and talk with him. “But I wanted to work with healthy animals, not sick animals.”

Pete was in fourth grade when he started 4-H. He would spend a lot of time with his friend, Matt Tastad, at the Tastad’s McCumber Ranch near Rolette.

He wanted to buy a horse to show, but his dad didn’t like that idea, urging Pete to buy a cow instead, for the economical edge.

So McCumber Angus chose one of their registered Angus replacement heifers, Rosetta 622, for Pete’s 4-H project and the start of his career as a rancher.

The heifer turned out to be a great mother cow and calved more females than males in her lifetime. Pete sold her first bull, and was able to buy more cows, and Best Angus and Quarter Horses was born.

“More than half of the cows we currently own go back to that original heifer,” he said. By the time Pete went to college, he owned six cows.

After high school, Pete went to NDSU, graduating with a degree in animal science.

Meanwhile, Vawnita (Hovet) grew up on her parents’ ranch, where Best Angus is located in the Badlands. She grew up in the scenic, rustic area, riding horses and enjoying ranching and working cattle with her dad, Kurt Hovet. While he has since passed away, her mom, Rita, still resides in Watford City.

“The Hovet ranch is a generational ranch, and it has been in the Hovet family now for more than 100 years,” Pete said. In fact, Vawnita’s uncle still lives on the homestead ranch.

At NDSU, Vawnita also graduated with a degree in animal science – and she also met Pete there.

Pete and Vawnita married when she was a senior. After college, Pete worked for a feed company, and when the company was sold and he worried he would be jobless, he accepted a position as an ag lender at First International Bank in Watford City.

Pete went back and forth from Watford City to Fargo during that time.

After graduation, Vawnita also worked for the bank in Watford City, but Pete was reassigned to a bank branch in Williston, N.D., so the couple moved there, and lived in an apartment in the city.

Later, Pete took a position as an ag lender in Towner, N.D., and Vawnita worked as the plant supervisor for Winger Cheese.

The Bests continued growing their cowherd, by keeping replacements and putting them out on shares with McCumber Angus or with Keith at Medalen Angus Ranch.

In addition, Pete’s initial cow continued having calves and they wanted to keep her genetics in their herd.

“Without the help of the Tastads and Medalens, there is no way we could have gotten started (ranching). In fact, a lot of people helped me along the way and it was sure appreciated,” Pete said. “I think that is why I have a soft spot for kids in town who show an interest in ranching. Just because you don’t grow up on a farm or ranch doesn’t mean you can’t like it and have an interest in it.”

With the dairy industry eroding in the state, the Bests were concerned the cheese plant might have to close, so Vawnita looked for a different position. She took a position as an environmental health practitioner at Custer Health in Mandan, N.D. She would inspect such businesses as restaurants and swimming pools.

Pete moved with her to Mandan and found a position as an ag lender with Farm Credit Services.

“We moved around the state a lot, seeing different places and meeting a lot of people in a lot of areas. The hardest part was making friends, then having to leave them behind and start all over again in a new place,” Pete said.

But no matter where they were, the Bests tried to return to Vawnita’s parents’ ranch near Watford City to help out her dad on most weekends. Eventually, her dad asked them if they wanted to buy the ranch, and they agreed.

With buying the ranch, they wanted to move back to the Watford City area and began figuring out how they could get their jobs back to the area.

“Vawnita took a job as the chief meat inspector for the state, which involved working from home but with a lot of traveling, and Farm Credit Services of Mandan let me transfer out to Dickinson,” he said. “We were getting closer (to the ranch), and then I found a job with Farm Credit Services in McKenzie County.”

After they worked at those jobs for a couple of years, they found out they were having a baby. Pete was asked to fulfill a position in Watford City as credit manager of all the Dakota West Credit Union branches in the state, and Vawnita worked two more years as the state meat inspector. She was then able to quit working and be a full-time mom to Kyle, while helping her dad at the ranch.

Pete worked as a credit manager until 2013.

“Then we were both making a living off of farming and ranching at that time,” he said.

The Bests have hosted three interns to the ranch and none of them grew up on a ranch, but they all enjoyed working with cattle on horseback.

Over the years, the ranch has grown into a place the family is proud of.

A lot of the grass at the ranch’s home place is crested wheatgrass, which makes good spring grazing before the native grasses are ready.

“Our place is a U.S. Forest Service inventory headquarters, and we are allowed to have 275 head of cattle here, but that is it,” he said. “We have Forest Service land that is mixed in with our headquarters that is used for fall and winter grazing.”

The family starts calving right after their production sale in March – March 24. If the weather is nice, the heifers and cows can calve outside in a 60-acre pasture. If the weather is more snowbound and freezing cold, they can lock the cows up in a corral and run everything through the calving barn.

“By the time we start calving, our annual sale is done. So calving seems so relaxing to me because it is right after the sale. I can just go out and enjoy tagging baby calves,” Pete said.

Vawnita enjoys working on and off the ranch. For the last year, she has been working at Northern State Fishing Tools.

Although the weather has dropped into the 20s and 30s some nights, the late fall weather is still fair, and the cows are still able to graze native prairie.

“We have a little liquid supplement for them, but the cows are out grazing native grass,” he said. They do feed them hay if the snow gets too deep.

The Bests, like most everyone in the region, experienced a mostly dry year this year. They had a lot of carryover feed from years past, which saved them this year.

“We got about 3 inches of rain in October, and we didn’t have as bad a year as some people. We mostly stayed green for the whole summer, but nothing much grew. We were just about to turn brown several times this summer and then we would get another half inch, enough to keep it green,” Pete said.

Pete’s parents now live with them on the ranch.

“It is great to have grandparents here, especially for Kyle. My mom loves to cook, too, which is really helpful,” he said.

Thank you to the Best family for agreeing to share their story with our readers during the winter months ahead. We wish them the best of success!

CENTER, N.D. – The Brown family at Brown’s Angus Ranch is entering one of the busiest seasons of the year for the seedstock operation.

SHEYENNE, N.D. – With corn harvest all wrapped up, Bill Smith decided to take some time and head out west to the Badlands for some fall huntin…

Out in the pastures with the Bests.

Vawnita and Pete Best with their son, Kyle.