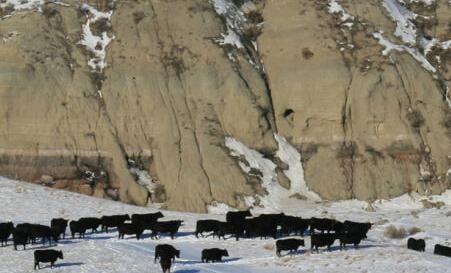 At Best Angus and Quarter Horses, Pete and Vawnita Best and their son, Kyle, have been dealing with a cold front that seems to have settled into the Badlands, bringing along several inches of snow with it. 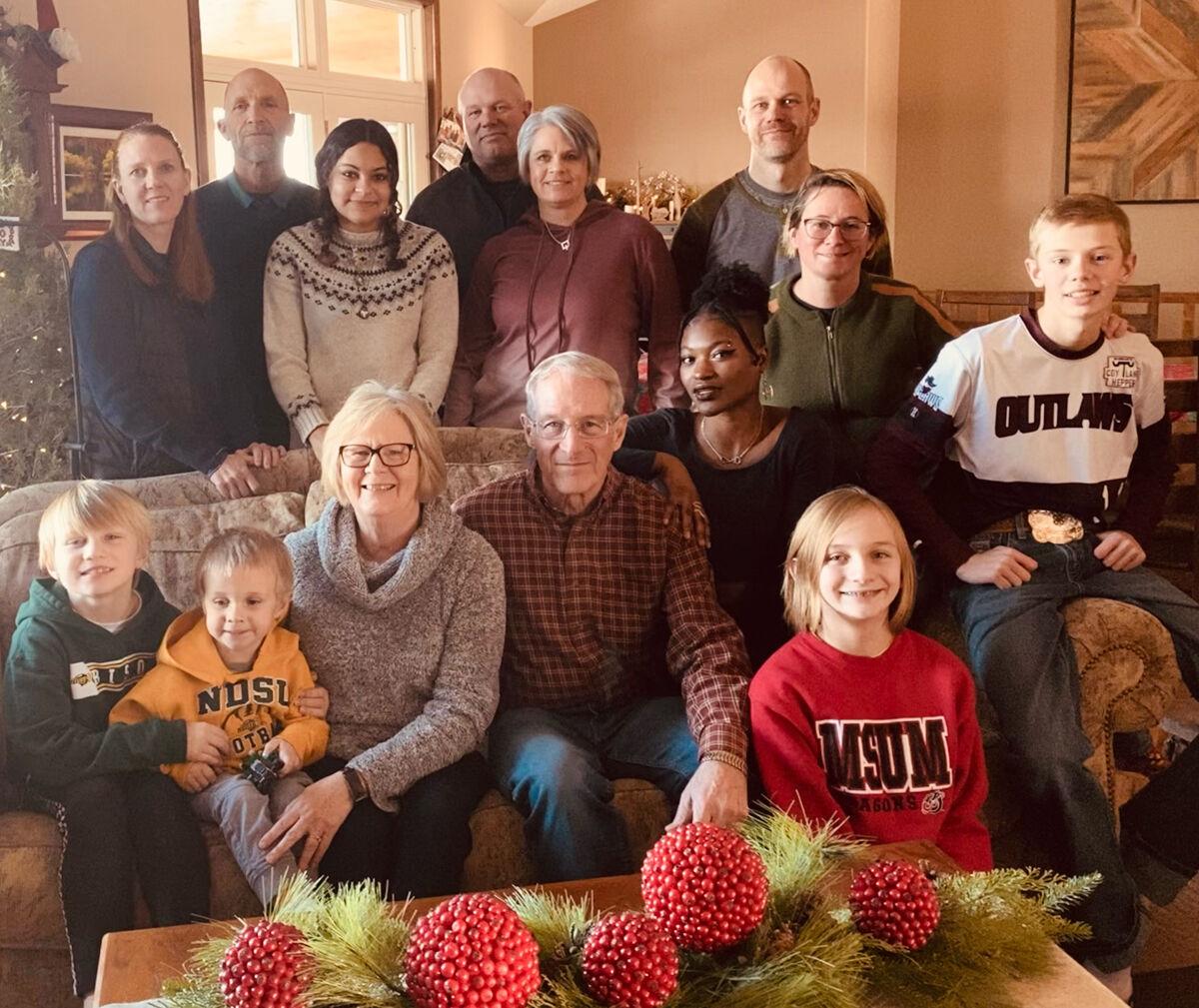 Pete and Vawnita Best, back row, with all their family at Christmas time at Best Angus and Quarter Horses.

WATFORD CITY, N.D. – At Best Angus and Quarter Horses, Pete and Vawnita Best and their son, Kyle, have been dealing with a cold front that seems to have settled into the Badlands, bringing along several inches of snow with it.

With many nights below zero, the Bests put straw down for the seedstock Black Angus bulls that will be in their annual sale at the ranch on March 7.

“We’ve bedded down the bulls for the first time this season, and they seem to have appreciated that. This morning (Dec. 31), it is 19 below zero and it’s only supposed to get to 14 below today,” Pete said, explaining there has been a week of colder weather. “We’re still white around here, too. We melted off once, but then we got 5-6 inches more snow.”

On Christmas Eve, it was just a “beautiful soft snow,” totaling about 4-5 inches at the ranch.

“Then, that night, it got windy and blew it all into drifts. The drifts looked nice and soft, the kind of drifts the kids would have enjoyed sledding on. Of course, it was cold out, and it only lasted a few hours before the snow (drifts) blew away,” he said.

The ditches leading up to the home place are filled with snow, which doesn’t leave much room to push more snow off the long driveway, if it snows again. Fortunately, the county clears the drive leading to their place, but the rest is up to the Bests.

Pete brother-in-law, Steve Kromer, from San Francisco, who was at the Best’s place for Christmas, had some fun learning how to clear out snow with the Bobcat.

“I taught my brother-in-law how to run the Bobcat and we pushed some snow,” he said. “It takes a little practice, but I think he had fun doing it.”

Pete and Vawnita’s nephew, 3-year-old Luke, had fun going out with Pete one morning to feed the animals. The little future rancher likes the big equipment on the place.

All in all, everyone had a good time during the Christmas visit.

At the ranch each morning, their employee and friend, Tracy, puts on warm gloves and heads out to check on the three separate groups of animals: the bulls, the first-calf heifers, and the cows.

“The bulls seem to be doing really well through the cold snap,” Pete said, adding that the bulls are still eating their same ration for growth.

In addition, they are keeping the first-calf heifers separate from the cows, so they can be fed a “little better” with the first calf coming.

At the Best’s ranch, the cold front had been cold enough that it has been difficult keeping water flowing to one of the pastures.

With preparations for the bull sale approaching, Pete said he was watching the forecast in order to be able to clip, torch, and later photograph the bulls.

“If we can get a few decent days, we can clip ’em and torch ’em. We never got our shed built over the cattle working chutes, so we are still outside doing this work,” he said, explaining if there is excessive wind, it can blow the flame on the torch. “If that is the case, we may build some kind of shelter out of straw bales so we can block the wind.”

Pete said he wants to get photos of the bulls for the catalog as soon as possible. The Bests try to wait a couple of days so the ash from the torch falls off the bulls’ coats, if they can, and they do all the photography themselves.

But time seems to fly faster than expected when making preparations for the annual sale.

“I thought it worked really well last year,” he said.

So far, no early first-calf heifers have calved during the sale.

“Last year was the earliest the sale would ever be, and this year, it will be the latest the sale will ever be. In addition, we put calving back just a touch, so we wouldn’t run into any crossing of the two (events),” Pete said. “That’s the reason we are thinking of building a new building up by the working corrals to aid in preparations for the sale.”

Before last year, the Bests had held their sale in town.

“I suggested we start having it at the ranch,” Pete said, and he has been glad they decided to go that way.

Meanwhile, Kyle, in his first time ever working on a website, is working on refreshing the Best’s web page and making it more attractive and user-friendly.

“Kyle is excited about refreshing the website and is learning the technology,” Pete added.

On the home front, Rayna, their cattle dog mom, is realizing her puppies are leaving to new homes, so she is lying down by the puppy bed all the time now.

The Bests are going to keep one puppy, and they hope Rayna and the puppy become “best buddies.”

“People have called and reported they are very happy with their new puppies,” Pete concluded.

CENTER, N.D. – While the Brown family stays busy preparing for its registered Angus bull and female sale, as well as beginning of calving seas…

SHEYENNE, N.D. – The start of a new year is here, which means it’s private treaty sale season at Midway Polled Herefords. While this time of y…

SHEYENNE, N.D. – As the week of Christmas got started, the Smith family at Midway Polled Herefords had plenty to get done before the end of th…

TELLURIDE, Colo. – Rachel Gray does whatever it takes for success for Little Timber Farms, the cattle industry, and her family.

At Best Angus and Quarter Horses, Pete and Vawnita Best and their son, Kyle, have been dealing with a cold front that seems to have settled into the Badlands, bringing along several inches of snow with it.

Pete and Vawnita Best, back row, with all their family at Christmas time at Best Angus and Quarter Horses.