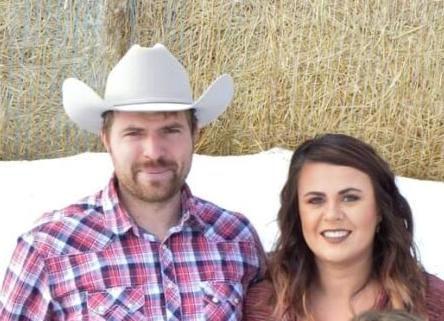 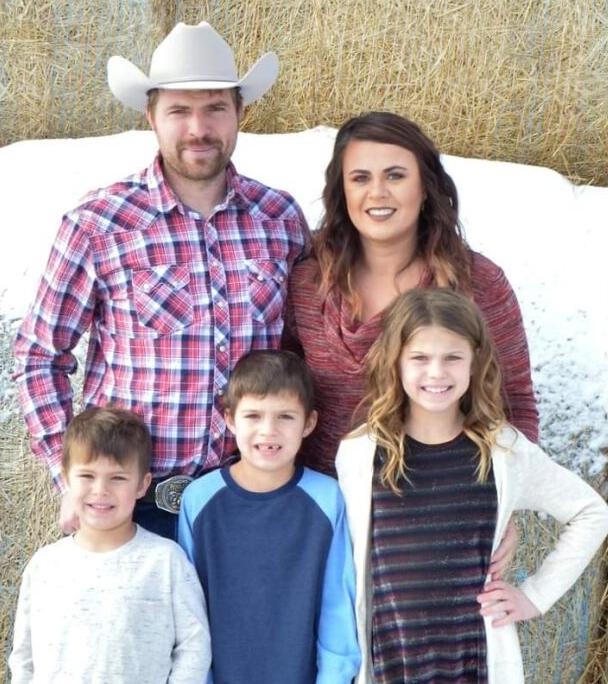 Justin and Kayla Brown, and their kids, Parker, Braxton and Brooklynn at the Brown’s Angus Ranch.

The family, headed by Paul Brown, built the entire ranch from the ground up, buying land, and adding a barn, corrals, and other infrastructure through a lot of hard work and a passion for breeding registered Angus cattle.

“We’ve built our operation from the ground up,” said Justin, adding he wasn’t sure he would be a seedstock breeder at first. “It wasn’t our original intention to be in the registered business, but my passion for cattle grew and I wanted more – I wanted to be able to supply people with good quality, seedstock bulls and females.”

The families will hold their 24th annual Brown’s Angus Ranch bull sale on the second Sunday in February. In 2022, the bull sale will be held on Feb. 13, beginning at 2 p.m. CST.

Brown’s Angus Ranch started in 1993 when the Browns bought their first commercial Angus cows. That was followed three years later, when they bought some “great heifers.”

“In 1996, we bought 50 open heifers, and 15 of the heifers were registered from the well-known North Star Angus Ranch, which is located a few miles from us,” Justin said. “The bloodlines go back to some of the most influential sires in the breed, such as Wham, Rito, and New Trend.”

In the beginning, Paul put some of the cows on shares at first and then eventually placed the registered herd with some local custom feeders as the family searched for land to build their ranch on.

“Grandpa lived just down the road, just 2-3 miles away, and grew up on the generational family ranch, but he did not get the family ranch. There was not enough land for all Grandpa’s siblings and Grandpa left the ranch when he was 18 to find a job,” Justin said. “In 2013, I bought my own ranch. Dad would be the first generation and we would be second generation raising registered Angus.”

From those original Angus heifers, they started growing the herd.

“We would choose a registered female here and there when we saw genetics we wanted to add to our herd,” he said.

In addition, since 1996, they have been using artificial insemination and embryo transfer to get some top-producing herd sires out of their top producing cows.

Justin has an interesting story about their bull, Brown Double Decker 0004.

“I bought some Hoover No Doubt’s semen when it was scarce because the price had jumped. We flushed one of our best cows, SAV Blackcap May 7888, a full-sister to 4136, to him. Not only do we think she is one of our best cows, she has a history behind her and a story to go with her and great marketability,” Justin said.

Part of the history has to do with her maternal sister, 4136, being a top pedigree in the Angus breed. She is known for easy flushing and she adds a lot of thickness.

He called the seedstock breeder who owned her in Georgia.

“After I saw some pictures, her phenotype and everything, I knew I wanted her,” Justin said. After two years of trying, the breeder decided to sell her to Justin, as he had several of her daughters. “We got her up here from Georgia, and she was open and ready to flush. I was just lucky. She is good-footed and can travel and has great mothering ability. I have daughters of hers now, and they are first-calvers.”

Justin has sold three sons from 7888, most recently Brown Double Decker 0004, and that has caught the attention of many top breeders.

“We shoot for balanced traits in our bulls and he has that. We are excited to get some calves from him, and we will be using him in the future. There will be some No Doubts in our sale next year,” he said.

During the summer, Justin and Paul run cattle together on pasture while Kelan runs his cattle down on the Missouri River with his wife’s relatives and on some land he has purchased.

They start calving heifers in February, and are still calving in the middle of their sale. They keep the calf with its mother for 24 hours so it can get colostrum and “mothers up,” and then they are back outside. There are plenty of calf shelters for the little ones.

The bulls are on the ranch right away after weaning early in the fall, and many of the female calves are kept as replacements.

“We are a totally family-run operation. We don’t have any hired hands,” he added. “Kayla, my wife, helps us around the ranch. She loves being outdoors, and helps with calving and other work.”

Recently, the Browns brought their registered cow herd close to home where they are grazing on corn stalks, and will graze around tree lines and on pasture. They stay out in the nearby pasture for the winter where there is plenty of shelterbelts, and they will be supplemented with hay out there. The cow herd stays athletic.

During the second week of November, Justin had been grinding grass hay, which is added to a total mixed ration diet with silage, corn stalks, and straw for their bulls. They may also use some alfalfa hay in the mix.

The bulls are now in their own pasture, where they can be developed. Justin will talk more in future reports about the bull crop and how they select for such traits as deep-bodied, calving ease, easy fleshing, good disposition, good structure and feet, as well as growth and longevity.

“We want the kind of bulls that work in this hardy environment for the cattlemen,” Justin said.

We want to thank the Justin and Kayla Brown, and the entire Brown family, for agreeing to share their story over the coming months. We look forward to following along with their operation.

WATFORD CITY, N.D. – In the majestic Badlands of western North Dakota where fall colors splash against the rocky, hilly terrain and registered…

Justin and Kayla Brown, and their kids, Parker, Braxton and Brooklynn at the Brown’s Angus Ranch.