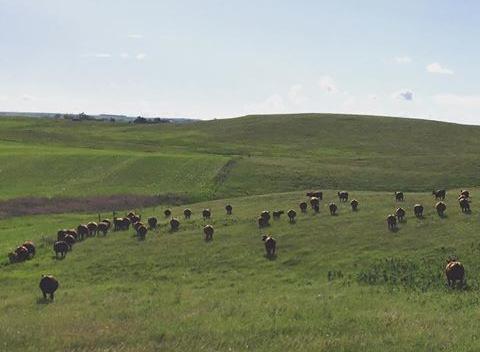 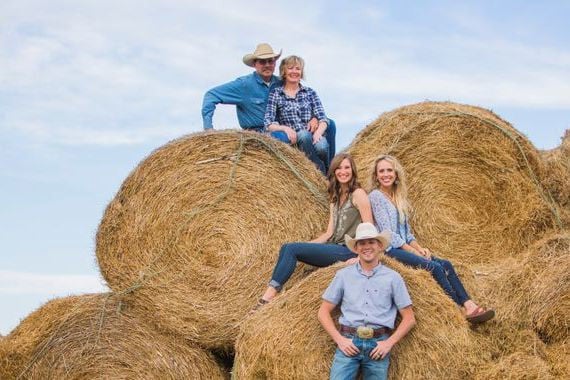 GOLDEN VALLEY, N.D. – With mostly mild November weather the week before Thanksgiving, Marc and Jodi Schriefer, who operate a registered and commercial Red Angus business, are happy to see a more normal autumn unfold at the ranch.

A cold October with rounds of snow and plunging temperatures had producers in the area very concerned about the rest of fall and the winter ahead. Even less than a week ago, temperatures fluctuated, with cold, bouts of light snow, and strong winds.

But warmer weather in the high 30s-40s, prevailed toward the end of the month.

“The recent stretch of nice weather has allowed us to keep the cowherds on fall pastures a little while longer,” Marc said. “Every day we don’t have to feed hay is very beneficial to the bale stacks and our time. Hopefully, it will let us extend the grazing window for our winter pastures.”

A few weeks ago, the Schriefers weaned their calves.

“The weaned calves are doing well, but the up and down temperatures has added some stress to the feeders and we’re pretty diligent with walking through the pens twice a day to check,” he said.

They have only had to treat three out of the whole group so far.

“They have responded to antibiotics as expected,” he said. “Early detection is the key to herd health, as well as good vaccination and nutritional programs!”

With sandier soils and good drainage throughout the ranch, the cattle areas seldom need straw.

The 2-year-old registered Red Angus bulls, designated for the Schriefers annual sale next March, have settled in to their paddock.

“We’re starting to book our advertising and plan our timelines for the sale preparations, and there seems to always be something to do,” Marc said.

The Schriefers, who work with their son, Riley, moved cows to their winter ground on Friday, Nov. 22.

Afterward, they took their bred heifers to a neighboring pasture for the winter.

Meanwhile, the family will be celebrating Riley and Cheyenne’s child, August’s, second birthday.

“We plan to celebrate our grandchild August’s birthday, and then we are heading to Bozeman for Thanksgiving at Cassi and Bill’s (their daughter and son-in-law) place,” Marc said.

Riley, Cheyenne and Steve (their hired man), will be “holding down the fort” and operating the day-to-day activities at the ranch while Jodi and Marc are away.

Meanwhile, the Schriefers finished hauling the last of their hay bales back from hay fields.

They have plans for a couple of events coming up.

“We’re making plans to attend the Stockman’s Ball (Dec. 7) and the N.D. Red Angus Annual Meeting and State sale (Dec. 13-14),” Marc said. “We finished hauling hay this week, but we still need to harvest quite a bit of corn now.”

Marc and Jodi hope the nice weather holds while they complete operations around the ranch, along with events off the ranch that they need to drive to.

“We wish everyone a Happy Thanksgiving,” Marc said.