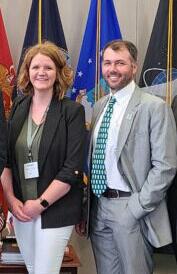 Lindsey and Drew Courtney advocated for ag at Corn Congress. 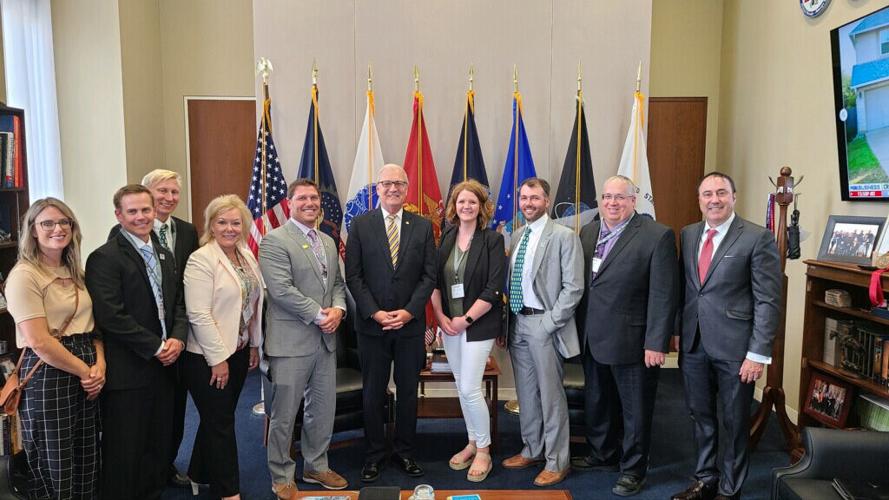 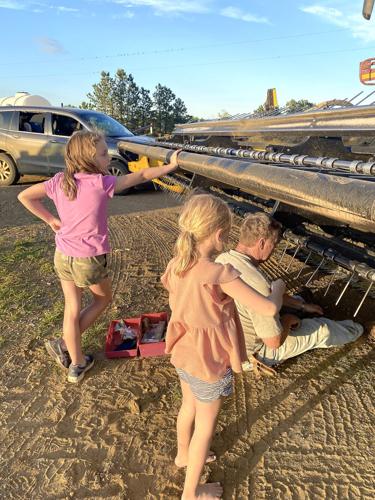 Avery and Ella Courtney look on, as their grandpa, Gary Friedt, works on the swather.

“It has been hot – the heat has been helping the corn grow big time, probably at least 2.5 feet in the last eight days,” said Drew Courtney in mid-July, who farms with his wife, Lindsey, his cousin, Kyle, and his wife, Megan. “The next thing we expect to see is tasseling.”

Drew was pleased to see his Reinke CropX soil moisture probes in the irrigated corn and soybean fields providing data that showed the soil moisture was good in spite of the intense heat.

“We have six CropX soil moisture probes in the irrigators that send readings to my cellphone. It ties into crop growth stages to tell me where the plant is at and where the root zone is at,” he said. “There are two probes in each field and they communicate wirelessly to provide a soil moisture chart that indicates the optimum time to apply water. It also notes the evaporation for the day, as well as plant water usage, so you can factor that in when you can start watering or start praying harder for rain.”

Drew explained the soil moisture probes “put more science into the operation,” and help with irrigation decisions so he only irrigates when the crop needs it.

“Right now, the probes are still reading in the optimum levels. We are not quite dry yet, but we can always use rain,” he added.

The soybeans also look great in the fields.

“The flowers are starting to show up. I am going to check some fields and I may put some fungicide on a few of them tomorrow morning (July 16),” he said. “We are trying to stay ahead of any disease, but with the heat, I don’t think it will be a problem.”

During the winter, Drew designed and built an interseeder to seed in cover crops after the corn started growing. The seeding provides crops to feed the soil biology for soil health, suppresses weeds, builds organic matter and keeps the soil from eroding.

“It was a winter project for me. I used a rotary hoe and set it to 30-inch row spacing, then placed a Valmar box on top with a fan and meter to count the seeds as they blew down from the bar. This allowed the seed to spread,” he said.

“This was Lindsey’s first time in D.C., but this was my fifth trip out there to lobby for agriculture,” Drew said.

Along with other NDCGA board members and NDCGA’s executive director Brenda Elmer, they talked with the North Dakota Congressional delegation about issues of concern to corn growers throughout the state and across the nation.

“On Wednesday, we walked the ‘Hill’ – that’s what it’s called – and we had meetings set up. The first meeting was with Zach Ducheneaux, administrator for USDA’s Farm Service Agency,” he said.

The group talked with Ducheneaux about topics such as: emergency relief programs, conservation easements, spring planting challenges and the overloaded regional offices.

“I brought up how the regional offices are so swamped and also about the need to keep a strong safety net for farmers during challenging times,” Drew said.

After that, the group met with the Canadian embassy.

“That was a new and engaging experience. We discussed things with them such as the farm bill and biofuels, and the biggest issue we talked about was the vaccine mandate at the border,” he said. “It is restricting our access into Canada and back. There is a lot of commerce between North Dakota, Canada, and the U.S. There is a great deal of equipment that is bought by Canadian farmers and a lot of corn goes to the corn mills in Canada. It is a big market for us and there has been a dramatic decrease in trucking efficiency because of the vaccine mandate.”

Drew explained truckers can’t cross the border without a vaccine. He gave an example of a NDCGA member who markets a lot of corn to Canada. He usually calls a custom trucking company, which has six trucks. Only one of their drivers is able to cross the border, so he goes back and forth across the border as quick as he can. But he is not able to bring all the corn that needs to go in the normal amount of time. His colleagues run the trucks from the North Dakota farm to the border and then switch drivers, having the same driver cross the border each time.

“It is very inefficient,” Drew said.

Afterward, NDCGA board members visited each member of the North Dakota Congressional delegation and discussed the following issues, including:

“For example, I farm some land that had easements put on it back in 1968 and that limits me from doing any improvements on the land where easements were purchased, such as drain tiling. The land is going backwards because of not being able to properly manage saline areas,” Drew said.

The group later met with U.S. Sen. John Boozman of Arkansas, ranking member of the Senate Committee on Agriculture, Nutrition and Forestry, and talked about the farm bill.

“A lot of the upcoming farm bill is going to be tied to conservation, and we feel they can’t be tying conservation programs to crop insurance,” he said. “There are things in North Dakota, such as cover crops, that we don’t have the growing season for every farmer to do on every acre, and we also want to make sure the people who have been no-tilling, minimum-tilling, and strip-tilling for the last 20 years and longer are not left out of these programs. We tried to shed light on the fact that some North Dakota farmers have been doing minimal tillage practices for quite some time and should not miss out on new programs because they have already implemented the practice.”

On Thursday, the group attended the Corn Congress for NCGA members.

“We updated policies in our handbook to help guide the NCGA staff in D.C., in their advocating for issues regarding corn growers and corn. It gives them a playbook for what the most pressing issues are on the home front,” he said.

The next day, the Courtneys came home. Lindsey went to Mott to pick up the girls who were staying with their grandma and grandpa at Friedt Herefords. Drew went back to farming.

“The girls helped Grandpa make hay,” Drew said. “I took off the dress shoes and put on the Red Wings within five minutes of being home, and I was out the door.”

Drew got caught up on some paperwork, was out checking on fields, and doing some cleanup around the yard.

“This weekend we are having our annual Guelph turkey barbecue. It is a fundraiser that we put on at the school to be able to keep it open for events and weddings,” he concluded.

Pivot towers topped with flags for a fun Fourth of July

OAKES, N.D. – With the crops green and showing potential, gaining some height while soaking up sunlight and moisture, the end of June/first we…

Lindsey and Drew Courtney advocated for ag at Corn Congress.

Avery and Ella Courtney look on, as their grandpa, Gary Friedt, works on the swather.