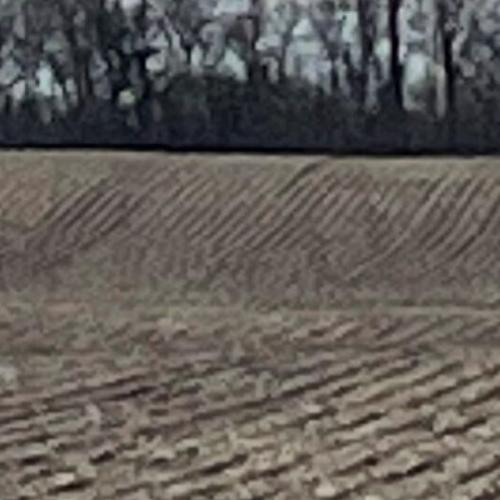 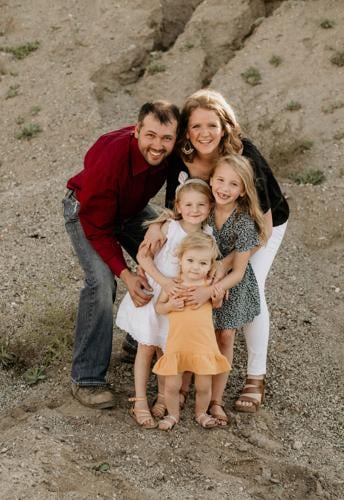 Drew and Lindsey Courtney and their three daughters, Avery, Ella and Claire.

OAKES, N.D. – In the gentle rolling acres of southeastern North Dakota near Oakes, fifth-generation farmers Drew Courtney and his wife, Lindsey, operate a family farm together with Kyle Courtney (Drew’s cousin), and his wife, Megan.

“Kyle and I operate the family farm together, and we grow mainly corn and soybeans,” Drew said. They also grow some wheat and rye for special projects on the farm.

This spring, they hope to seed Pioneer, DEKALB, CROPLAN, and LG Seeds corn and beans.

“We also produce soybean seed for Remington Seeds. We are a seed grower for them,” he said.

In addition, Drew and Lindsey own a small herd of registered Hereford cattle.

“We have been calving and have a couple left to calve,” said Drew on April 19.

The Hereford cows come from Lindsey’s family, the Friedts, who own Friedt Herefords, a well-respected seedstock Hereford operation in the southwestern region.

“I got into raising Herefords from my in-laws who own a seedstock Hereford business near Mott, and they have a production sale in Dickinson every year,” Drew said.

The weather hasn’t been the best for calving, but the Courtneys can easily move their eight pairs into the barn.

“The weather is cooler today – about 22 degrees, and there is little snow left in the trees,” Drew said, adding they missed the blizzard that hit a large portion of the state on April 12-14.

“That exact quarter they purchased, we still farm today,” Drew said. “Our bin site is located there, and my Aunt Geri still lives there, as well,” he said.

Frank and Lois passed the farm to one of their sons, Everett, and his wife, Margaret, who were Drew’s great-grandparents.

While Drew’s parents, Doug and Connie Courtney, did not farm, his uncles and their wives, Bob and Brenda Courtney and Kurt and Geri Courtney, later took over the farm. Kurt passed away in 2010 and Bob retired in 2012, but still plays a vital role in helping on the farm.

Drew grew up going out to the family farm on weekends and stayed there during the summer to help out.

“Every summer, I would work down at the farm, and it gets in your blood,” he said.

Kurt and Geri’s son, Kyle, started farming on the family farm in high school in 1999, and came back to the farm full-time in 2006.

Now, Drew and Kyle make the farm decisions together. As soon as the snow fades, leaving a moist seedbed, planting season will be here.

“We like to plant a quarter or so of wheat so we can get in early and do some drain tiling in late summer and early fall,” he said. “We’ll also seed some rye in any saline seep areas in the fields.”

Currently, Drew and Kyle are finishing up preparations for the growing season.

“We finished the tail end of some shop work, and Bret hauled in the last of the seed beans that got released,” he said. “We’re making sure the final T’s are crossed and the I’s are dotted, so when it’s time to go, we can go.”

“My cousin ordered a new planter back in October, and it has not shown up yet. We kept our old planter on the farm, so we are going to be running it yet this spring – a White AGCO planter,” Drew said.

Repairing and finishing maintenance on the planter was the last major project they completed this spring.

“We’re hooking things up, and pulling things out of the shed, so we’re getting ready to go,” he added.

Ideally, they like to begin planting corn by the middle to the end of April. They strip-till plant corn so they can band fertilize in the row and then come back in and plant into the 6-inch row.

“We’d like to be going wide open by now,” Drew said. However, the soil has been “frozen” in the mornings. “We actually spread some urea on some corn ground today because the ground was cold enough that we could get the spreader across it. Once it hits noon, we’ll stop.”

It has been warming up in the afternoons.

Sometimes, depending on the year, they will plant some soybeans before seeding corn on a few fields.

“If you can get some beans in early, it can yield more bushels,” he said. They no-till seed soybeans, but use tillage when necessary on the fields.

The two farmers have been pleased with the way their hybrids have been working the last few years on their farm.

“With the seed treatment and the hybrids we use, we have had pretty good luck so far,” he said.

Last year, they seeded some rye as a cover crop for soil health and for winter feed supplementing.

“Some I cut and baled on the first of June, and then planted soybeans back into that residue, which I combined that fall,” Drew said. “I only had to spray once, saving us inputs, and I shipped a semi-load of rye bales back to my in-laws in Mott, as they were dealing with a drought early in the haying season last year, and it was looking like they would not be able to bale a lot of hay for winter.”

Drew and Lindsey also let their cows into the corn field around their house in the fall after harvest to graze on some tasty corn stalks.

The Courtneys have gotten some good fertilizer contracts for this year, but they don’t know about next year.

“Next year, it will be a challenge, especially with fertilizer and chemical prices continuing to rise,” he added.

The Courtneys also believe in giving back to the community.

He also serves the rural community as chairman of the Hudson Township Board.

As chairman on the township board, Drew emphasized he wants to keep the rural areas in the state strong, but “still keep it appealing to kids,” so whether they grew up on a farm or ranch or city, they might return to the rural communities after college.

“You don’t truly value serving and volunteering in your community or on a township board until you have your own kids. Then you realize someone has to take it up and keep things moving and going, or our communities are not going to be there for our kids to come back to,” Drew said.

The Courtneys are an active family, enjoying snowmobiling as a pastime in the winter and spending time outside and at the lake and pool as a family in the summer.

In addition, Drew and Lindsey got their daughters their first pony this spring.

“We got a gelding named Bert for the girls, and this will be our first summer with him,” he concluded.

Farm & Ranch Guide thanks Drew and Lindsey, as well as the rest of the Courtney family for sharing their story with readers this growing season. We wish them the best of luck this year!

OAKES, N.D. – Seeding preparations have started at the Courtney farm in the southeastern region of the state, where Drew Courtney and his wife…

WILLISTON, N.D. – While northwestern North Dakota was in extreme drought a month ago, three blizzard/rain events this spring filled dugouts an…

WILLISTON, N.D. – A unique and historic farm, the Miller farm in the northwestern corner of North Dakota, is located seven miles from the Mont…

Drew and Lindsey Courtney and their three daughters, Avery, Ella and Claire.