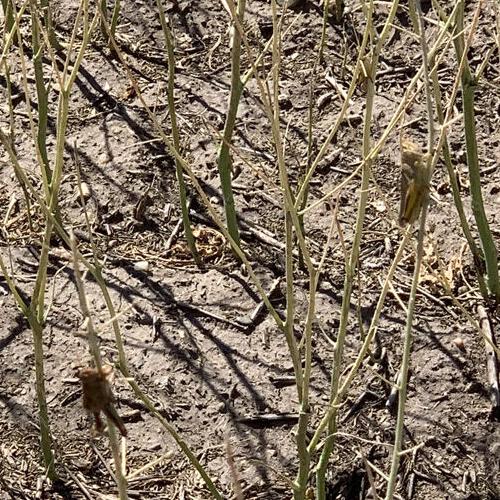 Floyd Miller took this photo of grasshoppers in his canola. They stripped all the leaves and left the stems. 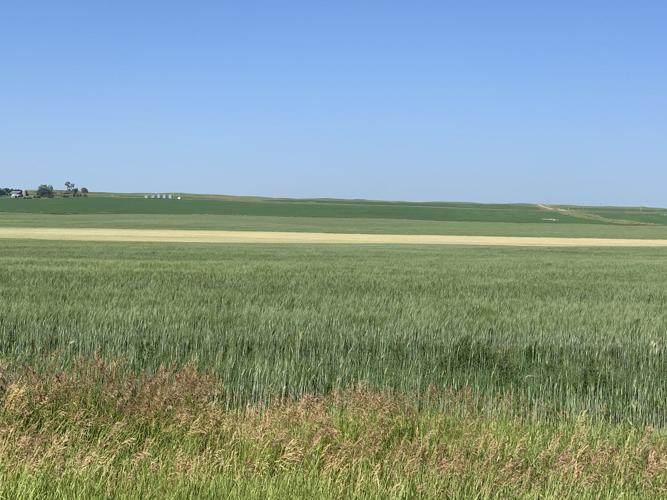 Floyd Miller’s stripped canola field in the foreground, where grasshoppers caused damage, with the rest of his canola in the background.

WILLISTON, N.D. – Most of the canola on the Miller farm has changed from blooming bright yellow to a slightly duller color, which means it is nearly finished blooming and starting to turn.

In addition, the early-seeded durum is heading, with nice heads on the stalks.

“The early durum is headed out and looking good, but we haven’t had any rain lately, so the later stuff is not looking as good,” said Floyd Miller, who farms with his brother, Rodney and son, Casey.

Spraying for weeds is finished for July at the Miller farm.

“Roger and Casey finished before I did. I had 40 acres left to spray in a durum field where there was some tough kochia growing,” Floyd said.

The weather has been hot – very hot – with not much for rain the second and third weeks of July. Floyd said the heat is probably keeping the risk for scab in the durum at a low level.

Before Floyd could bale hay, he worked on fencing most of the hot day. The Millers have a couple of steers and two cows on shares, plus two 4-H steers, in a pasture where the fencing wasn’t in good condition.

“The cows had gotten out and it took us six hours to find them, so we had to find them, bring them home, and then do some fencing in the heat,” he said. Floyd said he didn’t mind because he lost some weight after all that work. It was a hot, sweaty day, but the work had to be done.

His customers who own horses but don’t have pastures have already been coming to get hay, so he has some baled.

“We have been cutting and baling hay since the Fourth of July,” he said.

The Millers are still battling grasshoppers. When Floyd reseeded some durum after crusting in some acres near the house, the grasshoppers ate the new seedlings as they emerged from the ground.

Out in one canola field, grasshoppers ate the tops of the canola plants in a 25-acre area.

Last year, toward the end of the season, Floyd spotted grasshoppers in the kochia.

“They must have laid eggs in there or something,” he said.

There have been hoppers in the grass in the ditches around the sides of the farm. Floyd plans to let the grass grow instead of cutting it so that the grasshoppers will – hopefully – stay in the ditches.

“This is the 40th crop I have put in, and I have never seen it this bad with grasshoppers. It is just terrible,” Floyd said. “But it is only about a month until harvest anyway.”

Meanwhile, the Millers are watching the skies and hoping for some timely rains before harvest season arrives.

Pivot towers topped with flags for a fun Fourth of July

OAKES, N.D. – With the crops green and showing potential, gaining some height while soaking up sunlight and moisture, the end of June/first we…

Floyd Miller took this photo of grasshoppers in his canola. They stripped all the leaves and left the stems.

Floyd Miller’s stripped canola field in the foreground, where grasshoppers caused damage, with the rest of his canola in the background.