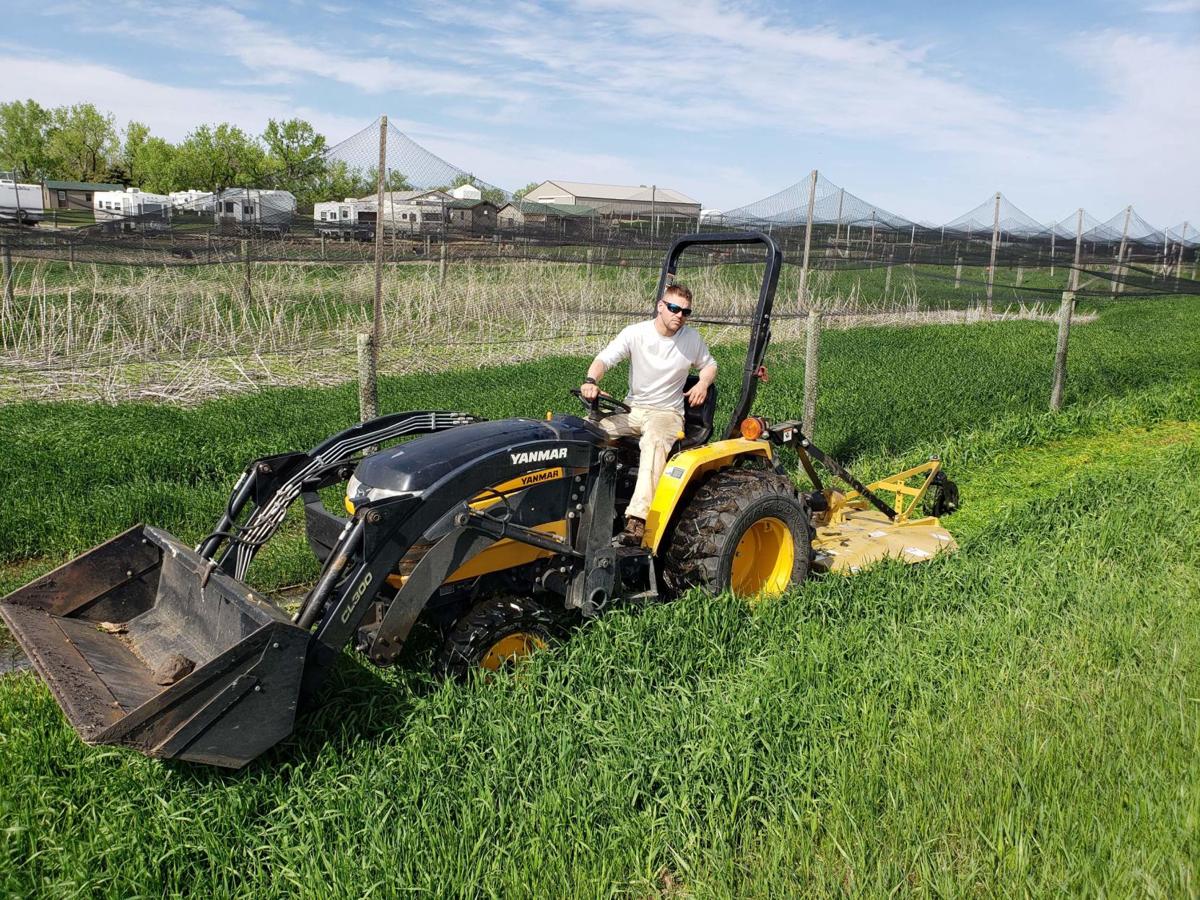 Shaine Swenson is mowing the grounds around the flight pens as they get them ready to start housing pheasant chicks. 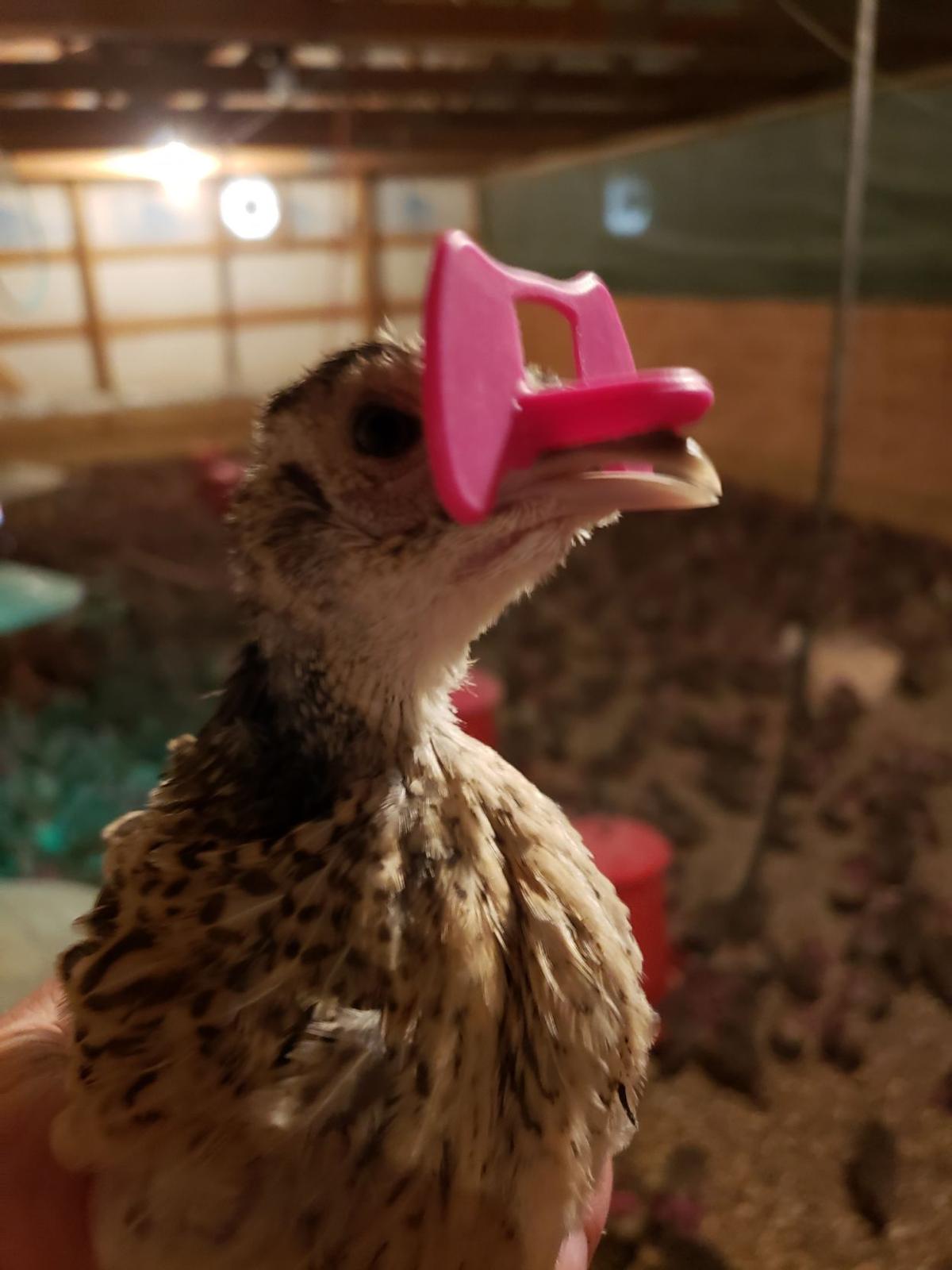 Close up view of one of the pheasant chicks with the blinds on. These will remain in place until the full grown roosters are sold later this summer.

Shaine Swenson is mowing the grounds around the flight pens as they get them ready to start housing pheasant chicks.

Close up view of one of the pheasant chicks with the blinds on. These will remain in place until the full grown roosters are sold later this summer.

FORT RANSOM, N.D. – The first batch of pheasant chicks will soon be making the move from the brooder barn to outside flying pens, which means they recently had blinders installed so they don’t peck at each other.

The lighting level in the brooder barn is kept very dim, which minimizes the cannibalism in the birds. These blinders will now remain on the birds until they are sold late this summer and will be removed just prior to shipment. The chicks will be moved outside on June 10.

According to Brad Swenson, the amount of space the growing birds have is the key to controlling cannibalism. In the wild, a pheasant hen will lay eggs until they get a nest full, which can range from a dozen to 18 eggs. Once the hen determines there are enough eggs in the nest, she will start sitting on the eggs and incubating them. That way all of the chicks will hatch about the same time.

Cannibalism is not a problem in the wild, since each bird has hundreds of square feet to roam. However, those raised in captivity don’t have that luxury and with less space comes increased cannibalism. This really starts at about 5 weeks of age if the chicks are crowded.

To further illustrate that point, Brad said they sell a number of day-old chicks to places such as wildlife clubs, who distribute the day-old chicks to their members. These members then raise them using a brooder stove at first to keep the chicks warm and by the time the chicks are five weeks old they are released into the wild.

“There might be a little cannibalism starting to show up right before the 5-week old chicks are released,” he said. “But once they released and signs of cannibalism quickly heal and the pheasants carry on a normal life.”

So the secret of controlling cannibalism is to give the birds plenty of room.

The birds raised by Brad and his family all end up going out into the wild for the sport of pheasant hunting. None of the birds are processed an end up as a “pheasant-under-glass” meal in an upscale restaurant.

“The restaurants don’t normally use a Chinese ring neck pheasant, but rather a white pheasant that is bigger and more muscular, and grows faster, almost like a chicken,” he said. “So if you buy a processed pheasant in the store they are a white pheasant and not a rink-necked.

Most of the roosters raised by Brad go to South Dakota where they are released into the wild and it doesn’t take long for the pen-raised birds to become a part of the wild scenario.

Most of the grown roosters Brad sells go to pheasant hunting outfitters that have hunters come in during the fall for pheasant hunts, while the wildlife clubs purchase day-old chicks.

Finally, son Shaine, has now joined the work crew for three months or so, and the extra help will be welcomed at this busy time of the year. He just returned from guiding snow goose hunting in Saskatchewan, and is now mowing the flight pens with a utility tractor.

Before the pheasants are moved into the flight pens, work such as mowing, tilling and spraying must be done to maintain the proper ground cover.