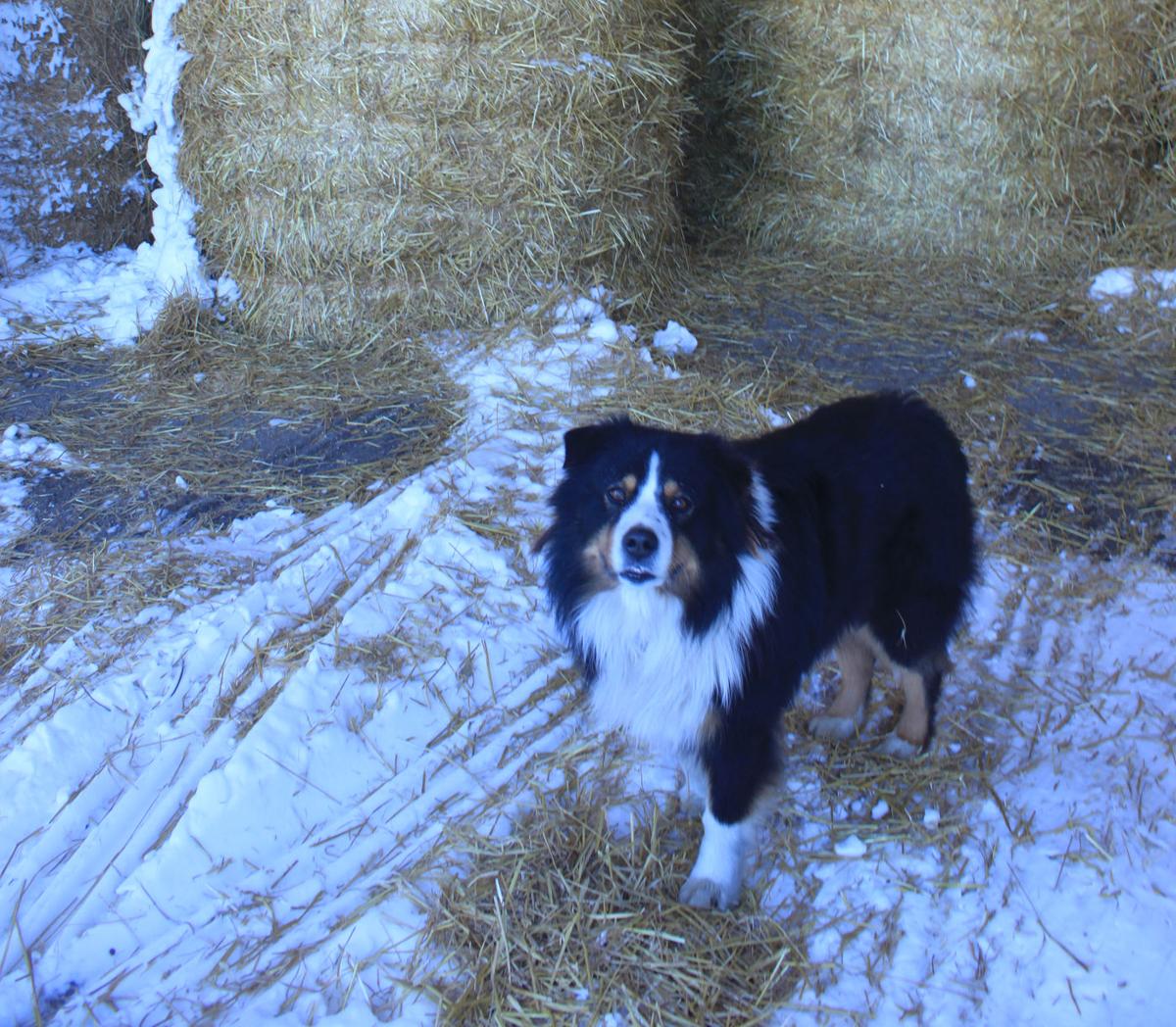 Bear Hanson, Gary, Minn., is an Australian Shepherd that works/lives at the home of Floyd Hanson. 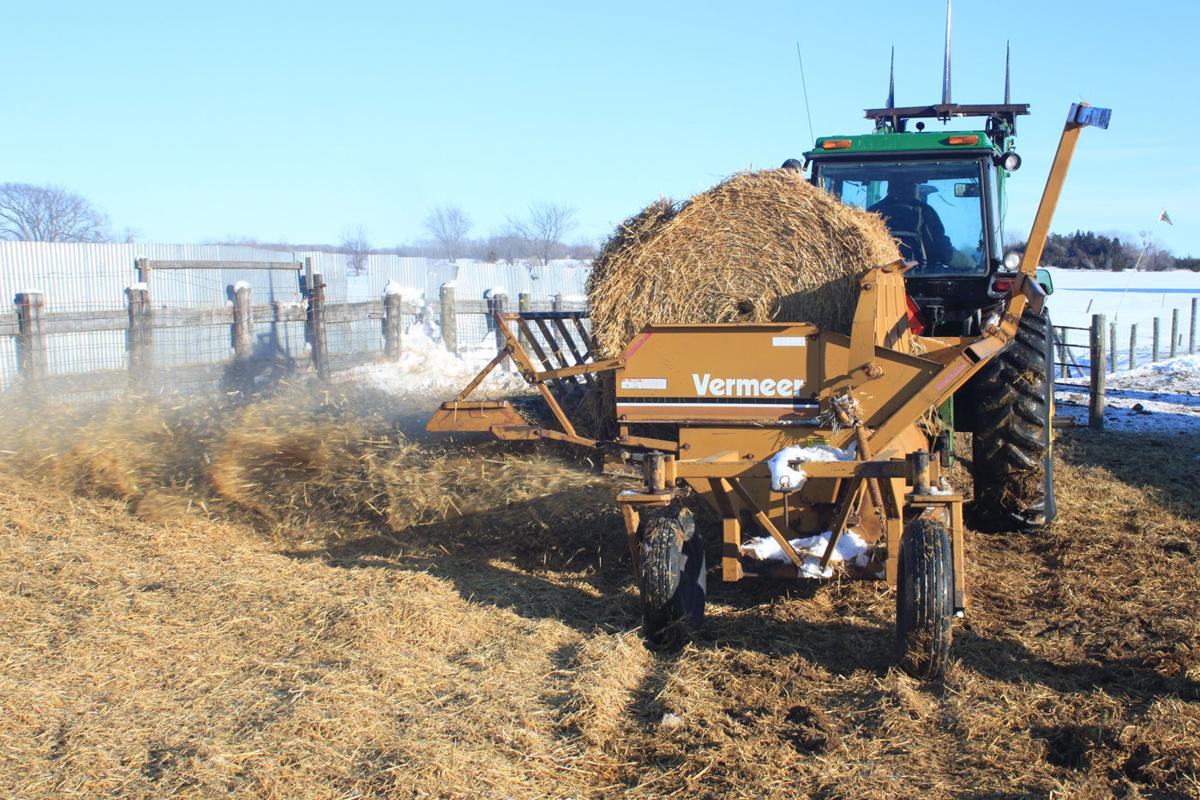 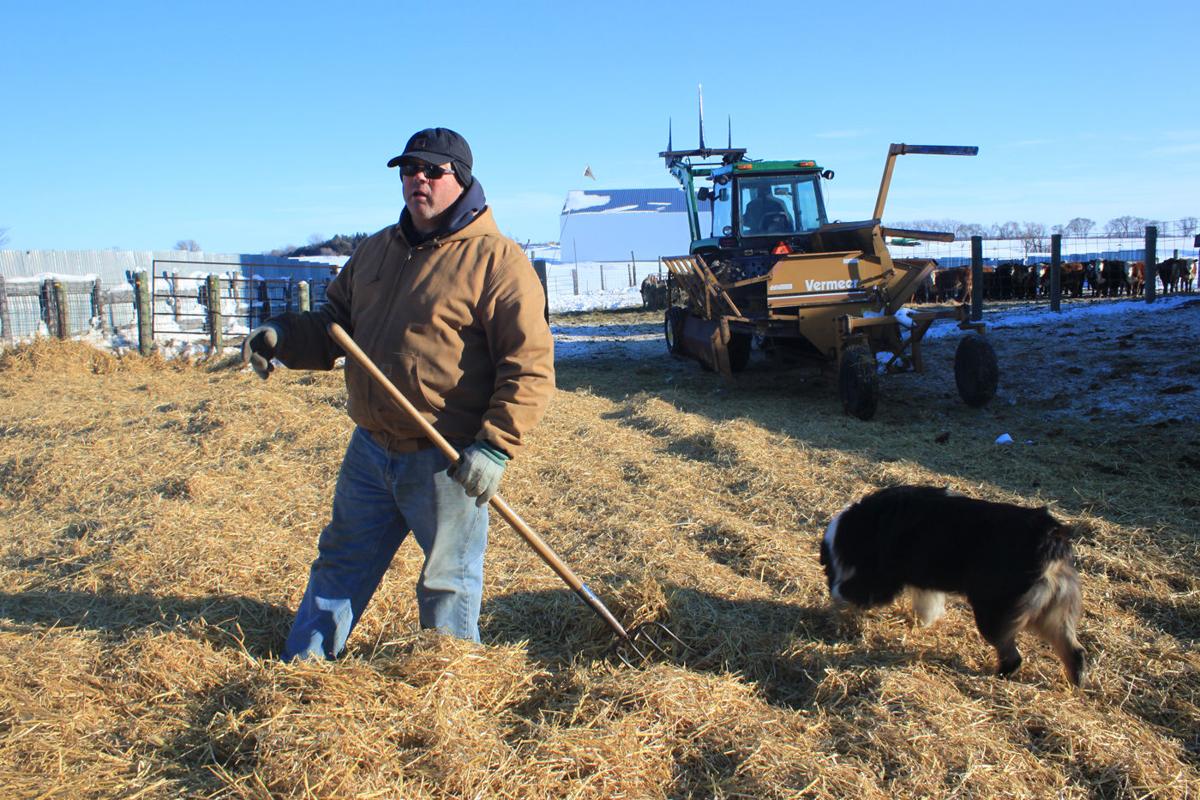 As Floyd Hanson drives out, Corey Hanson and Bear spread out the processed straw. Feeder calves wait in the two-part pen. Photo by Andrea Johnson. 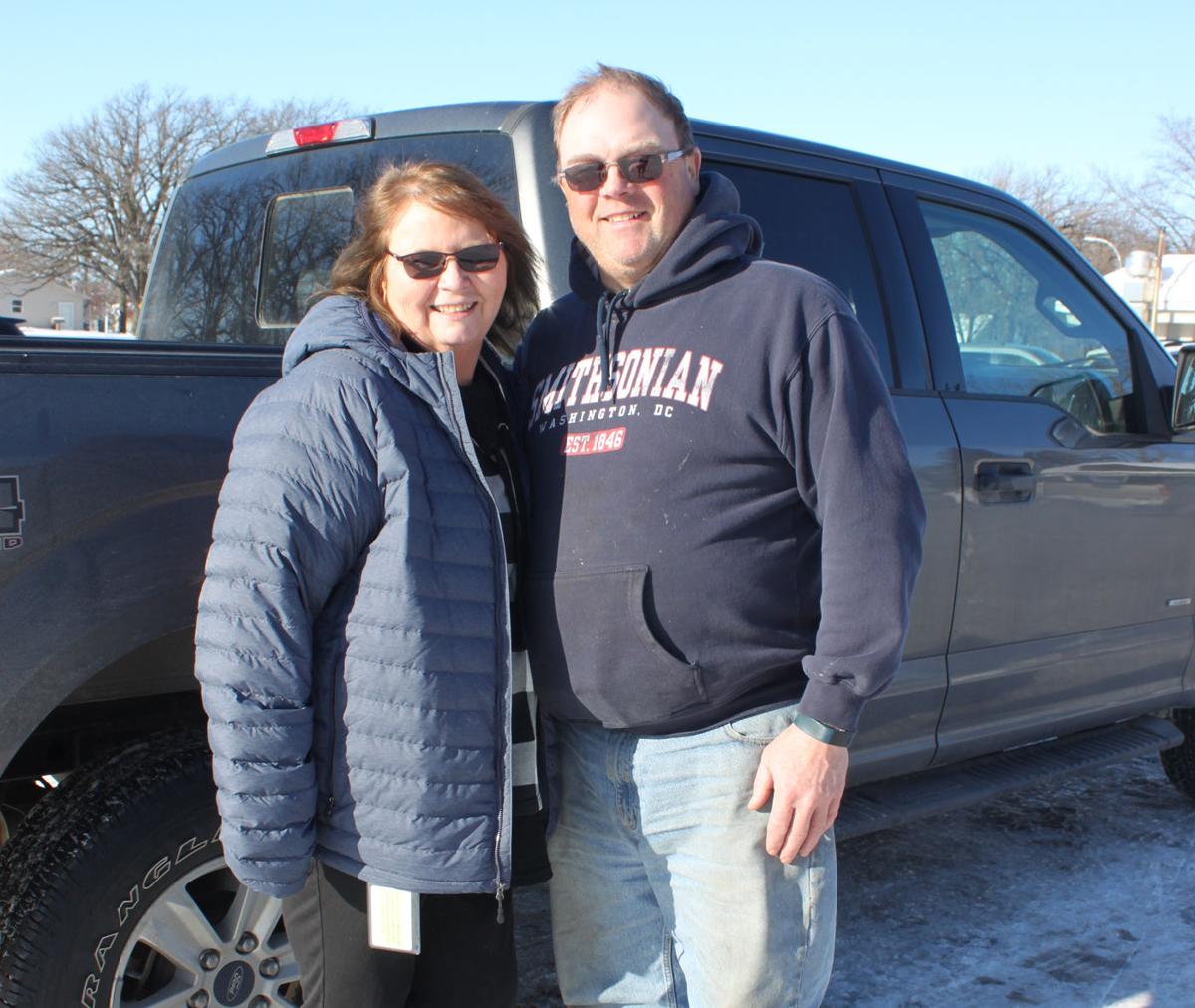 Bear Hanson, Gary, Minn., is an Australian Shepherd that works/lives at the home of Floyd Hanson.

As Floyd Hanson drives out, Corey Hanson and Bear spread out the processed straw. Feeder calves wait in the two-part pen. Photo by Andrea Johnson.

GARY, Minn. – It doesn’t take much for Minnesotans to drop their winter blues and enjoy life. Almost everybody was smiling on Jan. 6 when temps rose above 20 degrees. A lack of wind plus bright white snow made it a pretty good day to work outside.

At the Floyd and Corey Hanson farm, an Australian Shepherd dog named Bear raced across the many-acre farm site. Like people, animals enjoyed the sunshine on this particular day.

Bear followed Floyd who was driving the John Deere 4240 tractor with 720 loader set up to skewer big round bales. The hay shed and corn silage pile was a good quarter-mile away from the feeder calves’ pens. It was time for bedding down the feeders’ pens, so Floyd brought a beautiful golden bale of straw from the shed to the cattle.

With Floyd, 86, in the tractor, and Corey, 55, attaching equipment, they locked on their Vermeer bale processor and continued into the feeders’ pen.

Floyd set down the big round bale and then maneuvered the bale processor to snag it off the ground. Next, he drove to a portion of the pen where the Hansons have the start of a bed pack. That bale processor powerfully rotated, cut and spread the straw bale in a matter of minutes. The Vermeer has been a fantastic piece of equipment for the farm.

Next, Floyd made his way back to the hay shed, got a big round bale of alfalfa hay for the calves, and set it in their feeder. Bear tried to keep the cattle away while Floyd worked. Corey cut and collected all of the twines for disposal.

The Hansons also fed the calves a 13.5 percent protein mixture made up of processed corn, oats and pellets.

Those calves were rapidly putting on weight. The Hansons expected to sell them as fully backgrounded feeder calves on full feed, during the first or second week of February at the Bagley Livestock Exchange.

Besides the calves, there were 91 Hereford (dehorned) cows that were fed big round bales of corn stalks, as well as hay in their large pasture pen.

The first calves were due in late March, and the Hansons had enough feed in their hay shed to meet their needs.

Corey was surprised by the amount of snow they have received already. He figured the snow was probably knee-deep a few rows into the many cornfields that continued to dry in the fields. He used his tracked Ranger side-by-side to easily maneuver through the drifts. The ATV also works for ice fishing transportation.

Cattle chores in January took a few hours every day – more time if there was new snow to move.

It was also meeting season for Corey. He serves on the Norman County Corn and Soybean Growers board and helps with Norman County Ag Day, held on Jan. 8, 2020 in Ada, Minn. The meeting is held in conjunction with the Small Grains Update meeting and was an opportunity for Minnesota Wheat Council board member elections.

“Meeting season is just getting started, and it will be continuous,” he said. “There’s a land rent meeting next Wednesday, and there’s private pesticide training the week after that.”

Following the holidays, Corey and his bowling team were busy trying to make up some games, too.

The cattle and the livestock always come first, though, especially during the winter months. If a cow has a health issue and there is a meeting scheduled for the same time, the cow are taken care of first.

“The biggest problem is the lack of younger farming help that wants to deal with livestock farming chores,” Corey said, adding that he appreciates good part-time help for the farming operation. With himself and Floyd, and relatives helping out some of the time, livestock farming is always a major time commitment that requires work every day.

Blue Heeler/Australian Shepherd-mix, 12-weeks ready to go. Up to date