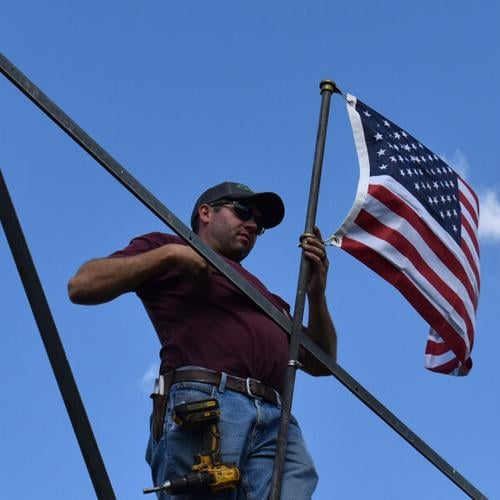 Drew Courtney put American flags atop the centers of the pivots for a nice display for the Fourth of July. 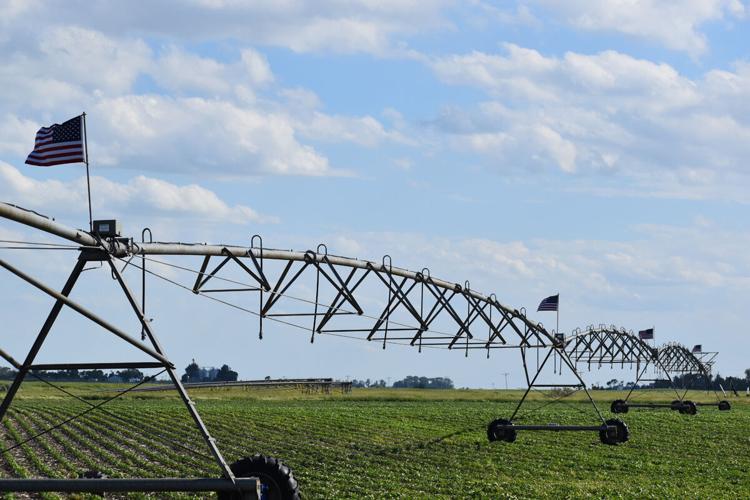 These pivot irrigators east of Guelph, N.D., that the Courtneys rent were all dressed up for the Fourth of July. It was something that his neighbor said they did 20 years ago.

OAKES, N.D. – With the crops green and showing potential, gaining some height while soaking up sunlight and moisture, the end of June/first week of July is an optimistic time for farmers.

“June 30 is my favorite day of the year because your beans are actually looking like something and your corn is taking off,” said Drew Courtney, who farms with his cousin, Kyle.

The Courtneys finished side dressing their corn in late June.

“Everything is looking good. We’ll be past knee-high by the Fourth of July with corn, for sure. Some of the corn is already waist-high,” Drew said. “I remember in 2012, we were tasseling on the Fourth of July. Every year is different, depending on when we get in the field.”

Soybeans are growing nicely and look good, except for those few areas where it was drowned out.

Drew has been busy around the farm cleaning up some equipment such as planters. He conducted maintenance on the planters and put them into storage now that planting season is over.

He finished his second spraying pass on the soybean fields on June 30. He sprayed herbicide to tackle weeds, including volunteer corn and some tough invasive weeds – waterhemp, thistles, and kochia.

“It’s a good feeling to get the second pass of spraying finished,” he said. “Our first pass of pre-emergent herbicide was getting to the end of its life cycle for controlling weeds.”

With tough weeds, Drew said it was important to stay on top of his spraying program to make sure the weeds don’t overwhelm his plants.

“I think weed pressure is going to be pretty strong this year due to the fact that our soybeans are planted in 30-inch rows. I don’t know if any of the varieties are going to canopy to save that ground, so that will be our next concern,” he said. “We may have to go with a third pass. I hope we don’t have to, but it is a possibility.”

Now that spraying is up to date, Drew and Kyle will turn to planting a cover crop on some prevent plant acres.

“We are probably going to do some rye, turnips, and radishes for cover crops. Rye really sucks the moisture out and it grows well in some saline areas,” he said.

Drew used his interseeder in some of his corn before it got too tall in late June. He is interseeding with a new machine they built this winter in hopes to keep the ground covered to decrease weed pressure, build organic matter, and decrease soil erosion.

In addition, the Courtneys have some land they rent east of Guelph, where they have some pivots irrigating soybeans.

“My neighbor said they put U.S. flags on top of the irrigators for July 4th,” Drew said. “I decided to do the same. It was a lot of work, but it was worth it.”

On July 1, Drew was finishing up fogging the lawn to get rid of mosquitoes.

“I’m going to get my uncle’s camper cleaned up and hope to get out of here by noon. We are going camping at Lake LaMoure to meet up with friends. We’ll take the girls boating and tubing. They are excited about seeing friends and being in the water,” he concluded.

Drew Courtney put American flags atop the centers of the pivots for a nice display for the Fourth of July.

These pivot irrigators east of Guelph, N.D., that the Courtneys rent were all dressed up for the Fourth of July. It was something that his neighbor said they did 20 years ago.