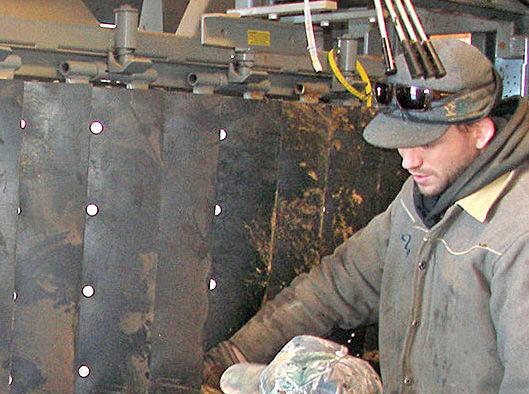 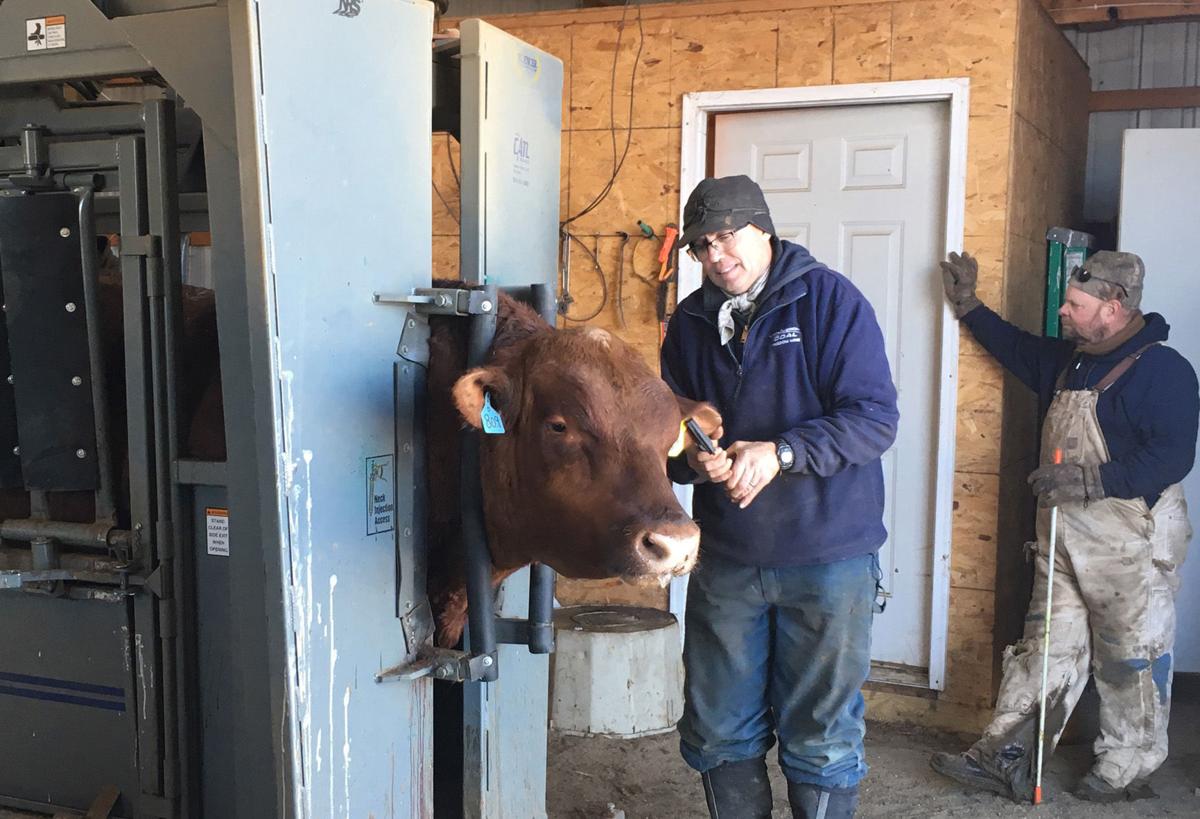 Marc Schriefer places the lot number in one of the bulls with top EPDs, while Steve Stern stands by. 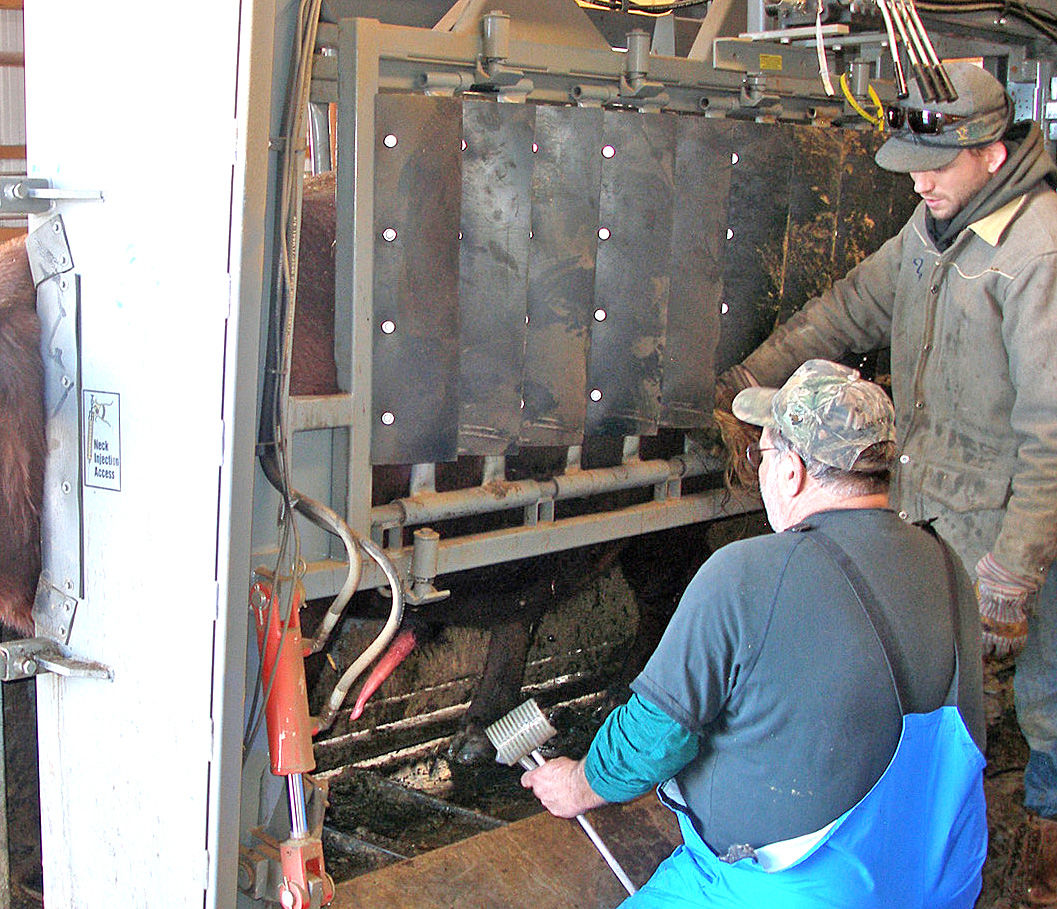 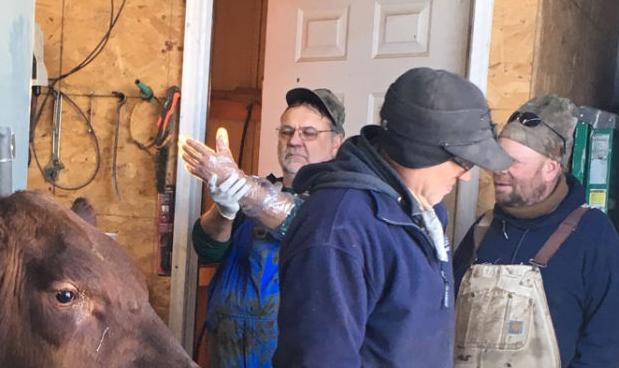 It was a busy day at Schriefer Red Angus as Dr. Dahlman, left, came out to conduct breeding soundness exams on the seedstock 2-year-old bulls in the upcoming sale. Steve Stern, right, and Marc Schriefer brought in the bulls and helped Dr. Dahlman as needed.

Marc Schriefer places the lot number in one of the bulls with top EPDs, while Steve Stern stands by.

It was a busy day at Schriefer Red Angus as Dr. Dahlman, left, came out to conduct breeding soundness exams on the seedstock 2-year-old bulls in the upcoming sale. Steve Stern, right, and Marc Schriefer brought in the bulls and helped Dr. Dahlman as needed.

GOLDEN VALLEY, N.D. – A bright afternoon sun with temperatures into the mid-30s radiated light throughout the south-facing feedlot at Schriefer Red Angus on Tuesday, Jan. 28.

Jodi earlier scheduled that day for the Breeding Soundness Exams on their 2-year-old registered Red Angus virgin bulls that will be in their 16th annual production sale March 12.

“It is going to be a nice day for the exams,” Jodi said a week before the exam.

Only a few days prior, temperatures were lingering well below zero, at least in the early morning hours, with light snow covering the grounds. Jodi, however, turned out to have her weather radar antenna right on point.

It turned out to be a warm-enough day that the bulls, bred heifers and cows and a few horses were moving around their areas throughout the feedlot, paddocks and pastures that could be seen from the barn.

Bred heifers and cows looked up from their hay left over from the morning, with the sun casting a glow to their red coats.

Everyone seemed to have an enjoyable day due to the nice weather.

Jodi is always present for the bull exams, but that day, she had a seedstock meeting at the North Dakota Stockmen’s Association, so couldn’t be there for it.

Dr. Morgan Dahlman arrived in his truck from Knife River Veterinary Clinic to do the exams on the sale seedstock Red Angus bulls, bringing all his equipment needed in several cases with him.

Marc and Riley, along with ranch employee Steve Stern, moved the bulls from their paddock to an area next to the barn in the feedlot.

One by one, Marc and Steve walked each bull into the barn through a series of fences, with the last one containing a gate that dropped after the bull went through.

The Schriefers built the new barn after the other barn blew over in strong 100 mph winds.

The Schriefers have a nice Silencer hydraulic chute, which they use to do exams on their herd.

Riley pointed out the various features on the Silencer hydraulic chute.

“Each of these levers operates a different side door or the head restraint,” Riley said, pulling open a lever that opened one of three side doors. The entire side can be squeezed to fit the animal comfortably and there are adjustable neckbars so the animal is not injured if he should move while he is being worked on.

Each door on the side can be opened to work on a certain part of the animal. There is a bottom door that opens, allowing for work underneath the animal, as well as a door at the end of the chute for the operator to enter.

“The animals are weighed when they step into the chute,” Marc said. The scale is electronic and the weight reads out on an overhead platform.

Dr. Dahlman set out his materials, and took a sample from a bull that he slid onto a slide. He put the slide under his microscope in the office part to the right of the chute.

Dahlman took the samples back to the office at the end of the day to take a full count. He also took different measurements that added up to a Breeding Soundness Exam.

While the “Doc” conducted the exam, Riley operated the hydraulic chute, wrote down the weight on each bull, and Marc did a pour-on for lice protection.

“All purebred bulls are tattooed with the ranch code on the right ear, and our ranch prefix is SMJ,” Marc said. They have a tattoo kit composed of tiny needles. “We print our tattoos when we do pre-weaning shots.

“We can look at the tag and see who the sire is but more importantly, we can immediately know what cow and calf are a pair,” he added.

Marc placed a yellow ear tag in each bull’s left ear. The tag is the lot number each bull would go through the sale with.

“This is the sale lot number, and that is the order they will be in in the sale. Jodi likes to have a top calving ease or a top performance bull in the top five lots,” he said.

Marc explained a top calving ease was different than a top performance bull.

“A top performance bull might be a good bull for someone who wants to have good weaning weights on steers and sell steers. A calving ease could be a good bull for a herd where heifers could easily calve on their own,” Marc explained.

When Lot 4 went through, the bull had an excellent set of EPDs.

“Lot 4 has 11 EPDs in the top 15 percent,” Marc said. Dr. Dahlman added that his semen was excellent.

Each bull had its own good EPDs and one had a weight that was more than 2,000 pounds.

Dahlman and Riley said that genetics was the main reason bulls put on good muscle.

As the bulls finished their exams, they walked out to the bunks where they waited on their own for the other bulls to finish. Marc and Riley had dumped extra goodies into the bunk so they had something to munch on while they waited.

With calm and gentle dispositions, these bulls didn’t need anyone to tell them to wait calmly. They just did.

Later, after the exams, Marc and Riley herded the bulls back to their paddock, where they could walk around in some spring-like weather.

It was an end to a beautiful winter day – only a few weeks to sale day.

In addition, after her meeting in Bismarck, Jodi picked up a pony for her grandchild August.

“I picked up Bunny for August. Bunny is August’s first pony, and we’re excited about it,” Jodi said.

The Schriefers will have their annual production sale on Thursday, March 12, at Stockmen’s Livestock Exchange in Dickinson, beginning at 1 p.m.

The sale catalog is now up on the website at https://www.schrieferredangus.com.