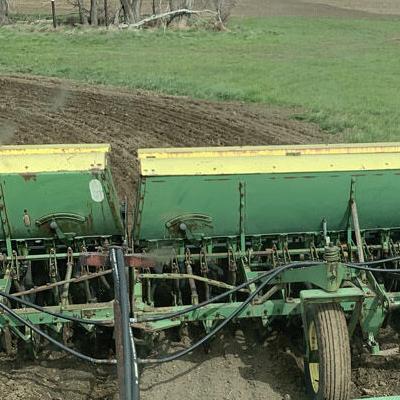 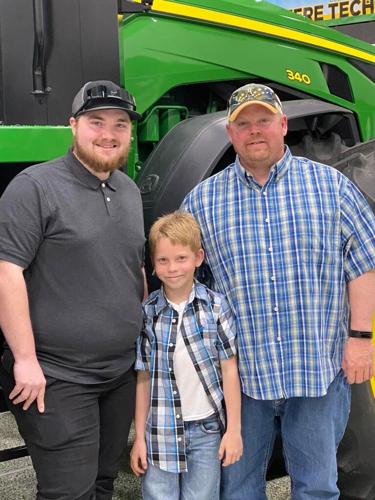 WILLISTON, N.D. – Seeding is going strong in the northwestern corner of the state, where Floyd Miller farms with his brother, Rodney, and son, Casey.

“We had a good week last week, and today I am already out in the field seeding durum,” said Floyd on the morning of May 23.

The day prior, Floyd starting seeding early in the morning and didn’t wrap up until 10 p.m. that night. Many of his neighbors were planting crops, as well.

“There are seven other drills going right now. I can look out of the tractor window from a higher spot in the field and see my neighbors planting,” Floyd said.

East of Minot, there have been planting delays because of heavy precipitation. But the northwestern North Dakota is planting quickly to get everything seeded by crop insurance dates.

The three Millers were all seeding in different areas of the farm over the last couple of weeks.

“Casey took a week off from the oilfield to help plant on the farm,” he said.

Last week, Casey seeded canola in the northern fields, which are nine miles from farm headquarters.

Floyd said when the soil is moist, durum can be seeded an inch deep, and the canola is seeded about the same.

The durum that Floyd seeded before the blizzard in the alkali areas has emerged, and the durum he seeded two weeks ago is poking through the ground.

“The ground was so cold, so it took longer to come out of the ground,” he said.

There are two hopper bins of durum seed on the farm, and one is empty. They have a cone on the bottom of them where the seed comes out, so Floyd doesn’t have to use a shovel.

They were 95 percent done seeding canola, as of May 23, with a few wet spots yet in the fields that need to be seeded.

“I want to work the wet spots a little to get them dry so I can seed them before the crop insurance date of May 25,” he said.

In order to do that, Floyd uses a heavy harrow to just scratch the top and then lets it dry for a day. Then he comes in with a field cultivator and scratches it a little deeper. After that, the field should be dry enough to seed.

That always works for Floyd in those years where wet spots keep them from fully seeding a field.

The weather was warming in late May, which gave a boost to the Millers while they were out seeding. Previous to that, it had been cool and windy. They have received slight rain showers here and there.

“We received a quarter-inch one day and then .10 of an inch and .15 of an inch earlier. With the cool weather, it wasn’t drying real fast,” Floyd said. “It was supposed to sprinkle on and off today, but I haven’t seen it. But that doesn’t mean it won’t come later.”

The forecast for the upcoming weekend is for hot weather in the 80s. They hope to be finished or close to finished by then.

“The warm weather should get the crops up and growing within seven days,” he said.

On the home front, Debbie, Floyd’s wife, has returned from Arizona.

“We were missing her. She drives and gets fertilizer or parts and drives us around the farm. When I walk in the house and my first words are, ‘Hey sweetie,’ Debbie knows,” he said with a laugh. Debbie always knows those words mean he wants a favor.

In addition, Floyd and Debbie's granddaughter, Tru, graduated from high school this week.

OAKES, N.D. – The corn and most of the soybeans are flourishing at the Courtney farm.

With seeding done, Miller looking for a good time to spray

New things to learn every day at Trinity Creek Ranch

RED LAKE FALLS, Minn. – There were many tasks to complete at Trinity Creek Ranch, where research and production go hand-in-hand.

WILLISTON, N.D. – The Millers, who have been busy seeding nearly every day from the last week of May through the first week of June, were able…