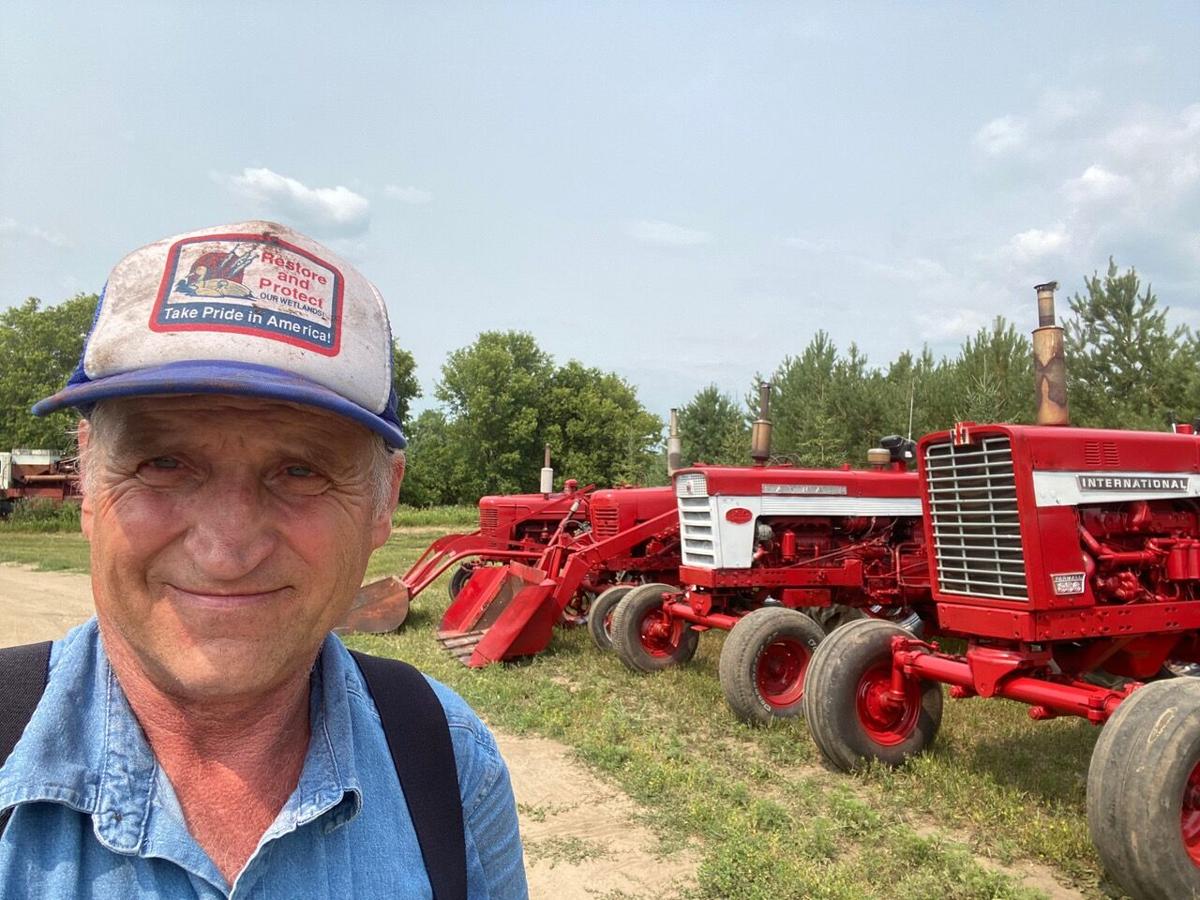 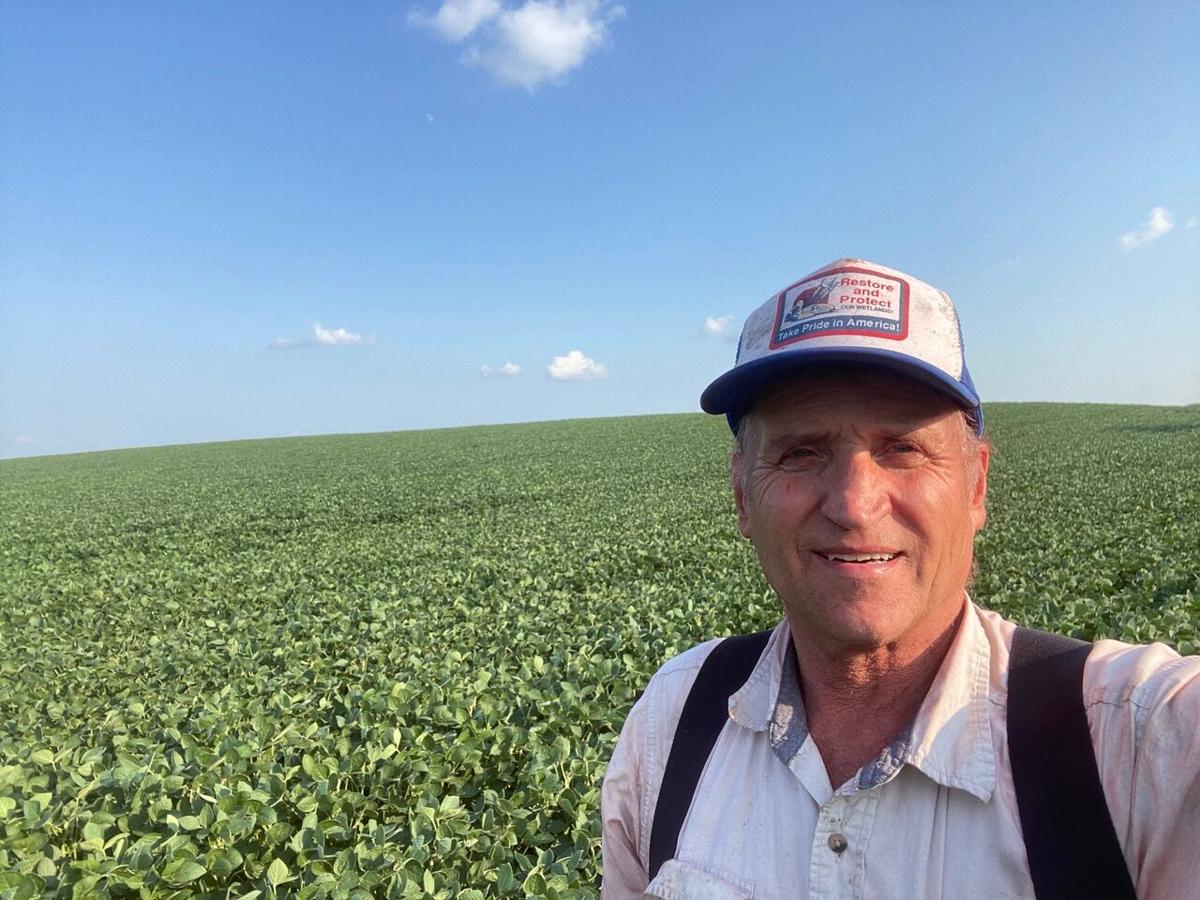 Soybeans have a deep green color and could still respond if rain arrives in early August. Photo by Paul Freeman.

“That was a fun project,” he said. “I figured as long as I’m doing a couple of them, I might as well do four of them.”

The Farmall M was a tractor Paul got years ago. He gave it to his brother for nothing, but by the time he got it working, Paul figured his brother had paid too much for it. Painting up the M was something Paul wanted to do for him.

The Farmall 400 runs an auger at one of Paul’s bin sites, and the Farmall 560 is the first tractor that he ever purchased.

The Farmall 856 is a tractor he bought, fixed up, and has for sale.

“The main driver for painting was getting that 856 ready to sell, but as long as I was spraying, I figured I’d do the others,” he said.

The tractors look good, and the Farmall 856 that is for sale will work well for putting up hay.

The crop situation turned serious with little to no rain for the month of July. The drought conditions remind him of 1988, Paul said, although there was more heat associated with 1988.

“For corn, July is make or break and the forecast isn’t good, but you have to live off of what we actually get off the ground,” he said.

“I know I can grow ‘half’ a crop, so when I look at crop insurance, I’m insuring that 50-75 percent range,” he said. “There have been a few times I’ve had prevent plant, and I’ve had hail through the years. All in all, I have paid out more than I’ve gotten back in, probably, but you’re glad you’ve got that insurance in that year where you don’t have much to sell.”

Similar conditions were occurring for soybeans. The beans were short, based on soil type, although a nice dark green color. With some moisture, they would still grow.

“It’s just frustrating to have a runup in prices and not have as much to sell,” he added.

State agricultural leaders are concerned with the drought’s effects on family farms. They are trying to get Conservation Reserve Program acres open for baling as soon as possible. The rules state that baling can begin after Aug. 1 in areas that are classified D2 (severe). Paul called Sen. Amy Klobuchar’s office to see if she could work toward an earlier opening.

One of the major topics was the California Cars rule. The MSGA is studying the actions by the California Air Resources Board with Advanced Clean Cars legislation. The program combines the control of smog-causing pollutants and greenhouse gas emissions into a single coordinated package of regulations.

Minnesota Soybean Growers are concerned that applying California rules here would be a step backward in cleaning up the environment. That’s because Minnesota is a leader in ethanol and biodiesel production, as well as other renewable resources – wind and solar.

“Minnesota has been on the forefront for renewable fuels, and it’s not the time to abandon that effort, where we’re ahead of the country on that,” he said. “There is no room for the California Air Resources Board (CARB) in One Minnesota (a united rural and urban state campaigned for by Gov. Tim Walz).”

The Freemans have driven Toyota Prius cars for several years because of the great gas mileage, but they believe in Minnesota’s renewable fuels.

“There are other states that are adopting the CARB,” he said. “When we have a stake in the game and we are proud of what we’ve done with biofuels, that’s the direction we want to go in Minnesota. Soybean Growers are lobbying elected officials about their desire to see renewable fuels used and promoted.

“The (petroleum-based) fuel for cars is not going to be happening in 100 years from now,” he added. “But we have to transition smoothly.”

WATFORD CITY, N.D. – In the majestic Badlands of western North Dakota where fall colors splash against the rocky, hilly terrain and registered…

Soybeans have a deep green color and could still respond if rain arrives in early August. Photo by Paul Freeman.