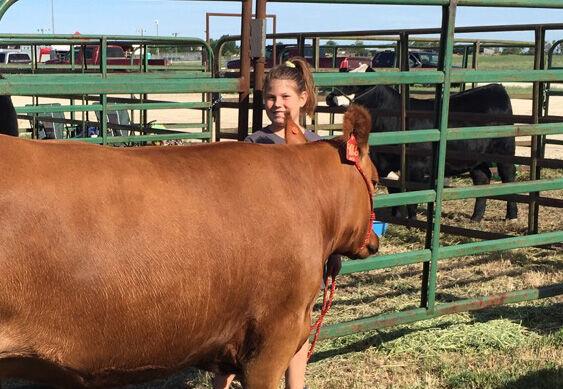 Kylee Sickler shows her Red Angus she groomed for the fair. 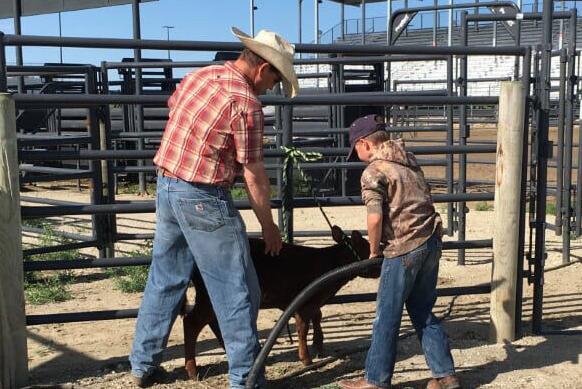 Chad Skager shows his son, Lucas, how to groom his Aberdeen Angus calf. 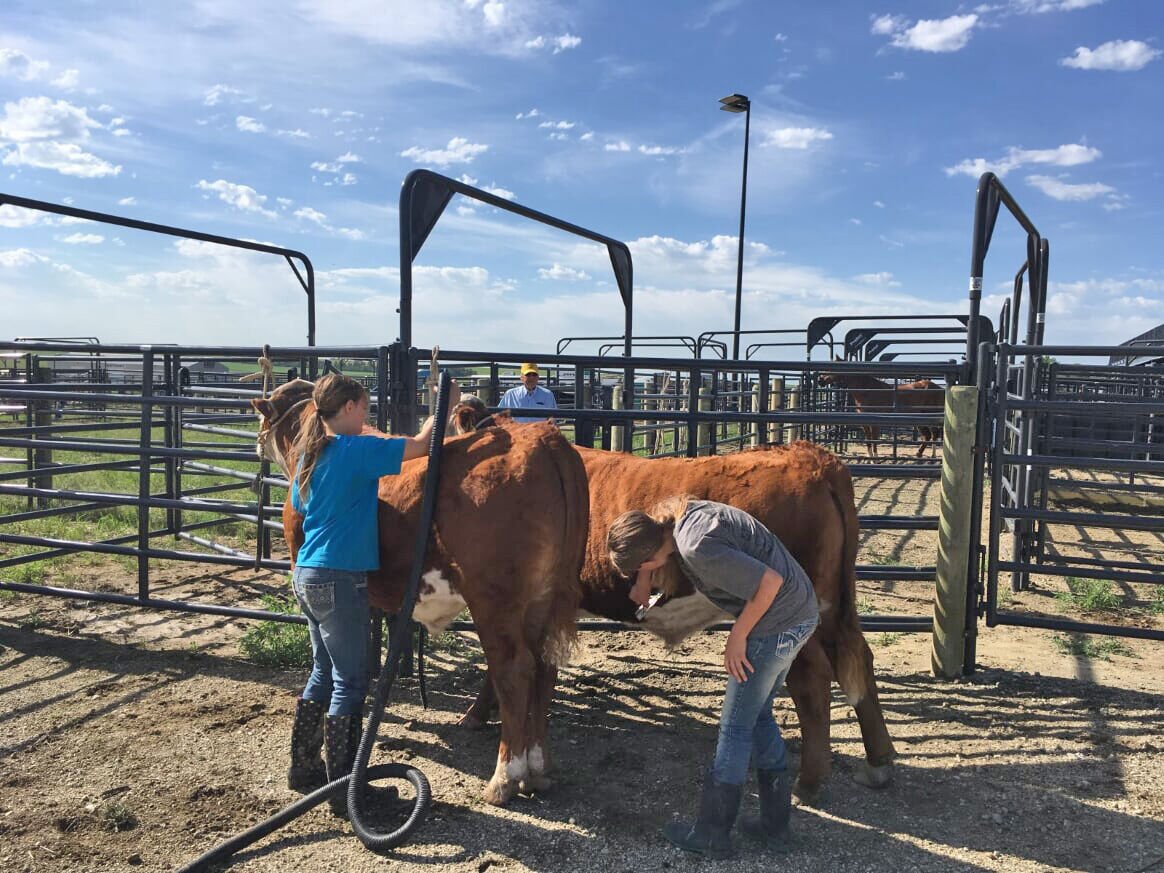 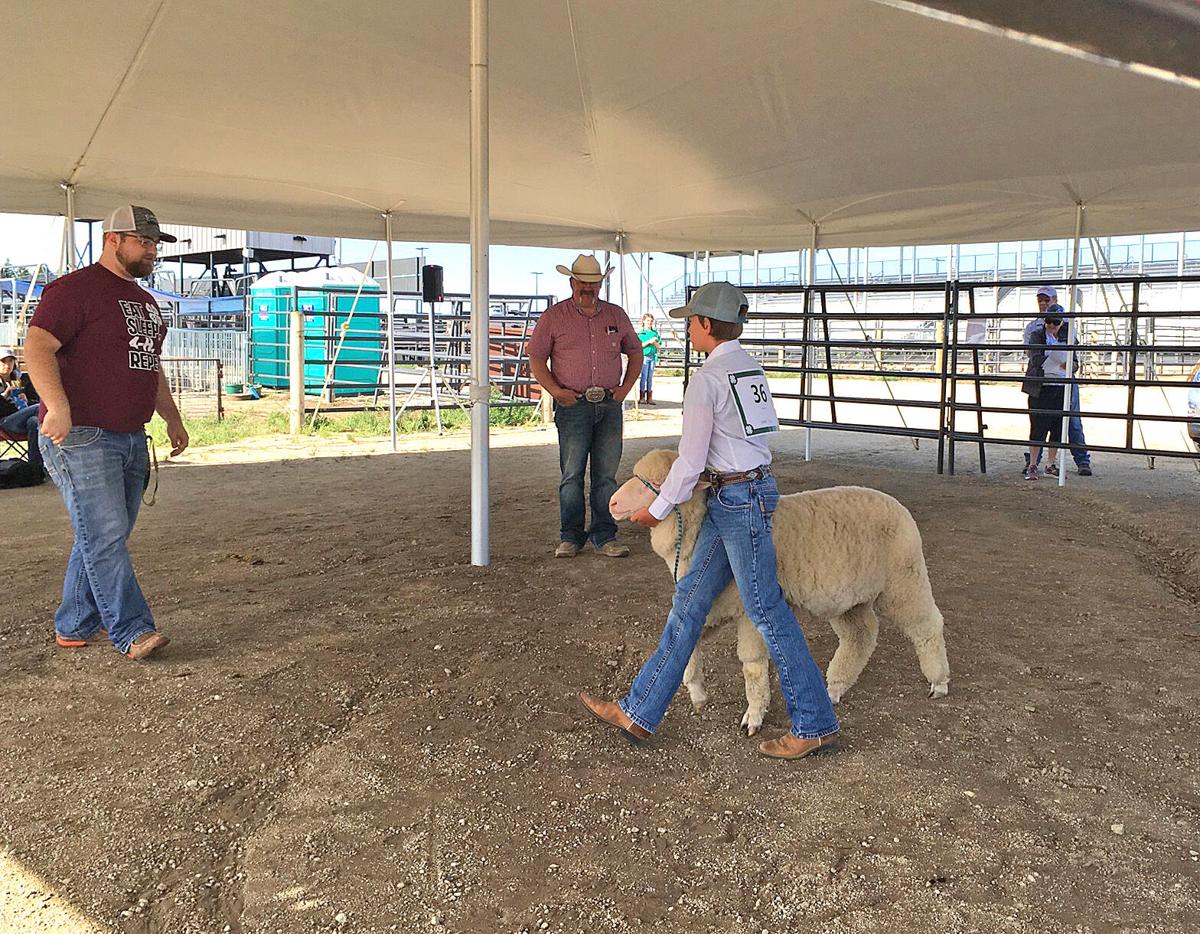 Cade Bohlman wins a blue ribbon with this beautiful sheep. In the ring, at left, Sam Poland is the ring stewart while Donnie Fiering, judge, middle of photo, judges Cade's sheep.

Kylee Sickler shows her Red Angus she groomed for the fair.

Chad Skager shows his son, Lucas, how to groom his Aberdeen Angus calf.

Cade Bohlman wins a blue ribbon with this beautiful sheep. In the ring, at left, Sam Poland is the ring stewart while Donnie Fiering, judge, middle of photo, judges Cade's sheep.

Kylee Sickler carefully combs out her two females, a Red Angus and a Gelbvieh that she will show at Stark/Billings Counties Achievement Days.

At the other end of the grounds, Lucas Skager, a first-year 4-H exhibitor, listens to his dad, Chad, explain how to groom the well-behaved Aberdeen Angus heifer calf. Lucas wields the blower with confidence.

Other 4-H kids from Stark/Billings Counties are spread out across the Stark County fairgrounds – a fairgrounds that is not fully built, and has no livestock barn.

NDSU runs 4-H in the state and requires COVID-19 rules to be followed. Kurt Froelich, NDSU Stark/Billings Counties agent, knew it would be a monumental task to pull off a fair – but he wanted to do it.

“Being a Dad myself, I just didn’t want to disappoint the 4-H members. I did not want to tell them we were cancelling 4-H Achievement Days and the premium sale,” said Kurt Froelich. “It has already been tough for the 4-H members. We haven’t been able to do 4-H club meetings, unless they were over Zoom. We wanted to figure out a way to do this.”

Kurt and Holly Johnson, NDSU Stark/Billings Counties Family and Community Wellness agent, decided to sit down and pencil out a plan.

NDSU COVID guidelines suggested only 10 4-H or FFA kids at a time should be in an arena.

“Instead of focusing on a number, Holly and I thought about how could we put a plan together and do this safely?” Kurt said.

The plan would include how everyone could be safely distanced and only those who could fit within that area would be judged at one time.

Together, they drafted a four-page plan.

“We looked at it, revised it, and then ended up with a 10-page plan,” he said. “Because we wanted to use the Henry Beisiot Activity Center (BAC) for the 4-H static exhibits, we first submitted the plan to Dickinson State University for approval.”

The two also submitted it to Southwestern District Health Unit (SDH). SDH reviewed it and sent back a few suggestions.

“We modified the plan according to SDH, and they approved it,” he said. “We ran it by the Stark County Emergency Manager, and then Stark County Park Director, and both approved it.”

Lastly, the plan went to the NDSU 4-H Youth Development in Fargo.

At the time, Kurt and Holly were on a committee of counties trying to figure out ways to do the 4-H County Fair (4-H Achievement Days), especially how to show livestock, ” Kurt said.

Out in the western regions, there were significantly less individuals with COVID-19 than in the eastern side in counties like Cass. Both Adams County and Golden Valley Counties had no cases and others had 1 or 2.

With the plan completed and approved by everyone, Kurt and Holly had the first NDSU approved plan in North Dakota that met all the NDSU COVID guidelines.

“We made these recommendations in the plan and our plan was submitted and it ended up going to the president of NDSU,” Kurt said. “We were ecstatic we got approved."

It was exciting to be the first in the state with an approved plan to run 4-H Achievement Days.

“Other counties wanted to use the plan, and modify it, and we were happy to share it,” he said.

The plan took a lot of work before it satisfied Kurt and Holly.

They considered using DSU’s indoor arena, where there is fresh water and previous animal shows have been held. But it was very small.

“We worried about how we could fit animals and 4-H kids and their families safely indoors and safely distance. We didn’t feel it would work,” he said.

So they looked at outdoor spaces - the Stark County Fairgrounds, in particular.

Up to now, it didn’t make sense to use the fairgrounds – there is not a barn for the animals to stay cool and get water.

Kurt and Holly decided they could hold a trailer show.

“The 4-H kids and their families could leave their animals on the trailers until it was time to show. Then they could bring out their animals and show them, and then return them to the trailer,” Kurt said.

Kurt used to show animals, and his kids also have shown animals, so he knew it could work.

“As livestock people, we all have generators and we could hook up fans to them to keep our animals cool. And the 4-H exhibitors and their families did just that,” he said.

To help out, the Stark fairgrounds folks built pens for the animals that were 16 X 16 square feet.

“They were huge pens. One family could take one pen and socially distance, so it worked out,” Kurt said.

Stark/Billings Extension planned to use the big rodeo arena to exhibit animals. But it rained heavily, and the area turned to mud.

“Mother Nature dumped a bunch of rain – we would have had to show in mud,” he said.

Another problem that cropped up was the pigs.

“Pigs cannot handle the sun or heat. We knew we had to do something for the pigs,” he said.

The fairgrounds folks put up a tent, and Kurt thought it might work for the pigs. In the end, there were only four pigs shown, and they were kept in pens with tarps covering them for shade on trailers and taken out and shown on the grassy area next to the pens.

“Pig numbers were smaller than we expected. In fact, numbers for all our animals were down this year,” he said. Kurt understood that many were concerned about COVID.

“I understood about the concerns, but I still wanted to make a livestock show available for the kids and families that wanted it,” he said.

They made the classes for each show, such as the goats, small enough that there were only two or three 4-H exhibitors under the tent with the judges at one time.

“We followed social distancing and it worked well,” he said.

Kurt brought in Donny Feiring to be the judge, who is from Golden Valley County, a county with no cases of COVID-19 at the time of the year.

The horse show judge came from a county without many COVID cases, either.

“We made masks available for anyone that wanted them,” Kurt said.

In the tent, they set up a table for the helper taking notes and there was one exhibitor at a time going through.

4-H exhibitors showed the beef cattle in the large, grassy pen, and “there was plenty of room.”

When Stark/Billings 4-H exhibitors got to the “Round Robin,” volunteers who were helping Kurt with the show all had bottles of hand sanitizer.

“Before the youth moved from sheep to goats, for example, they received a shot of hand sanitizer on their hands so they could clean up between animals,” Kurt said.

Volunteers brought over show sticks or other handles - whatever was needed to show that animal - and it was cleaned before handing it to each exhibitor.

“We also sprayed everything down every two hours. For contact tracing, one volunteer wrote down the family names that were exhibiting, so no one had to sign anything,” he said.

Two weeks have passed since the event and there have been no incidences of COVID-19.

There was also a plan put together for the inside exhibits at the BAC. The families signed up to bring their static exhibits in at a certain time, and the exhibit would go to the right table to be entered into that class of exhibits.

“We didn’t have live interviews. We encouraged youth to write a few lines on a recipe card saying, ‘this is what I learned about this this year,’” Kurt said.

Holly also did a virtual tour of the inside exhibits and that is available on their website and Facebook page. The public was not allowed in, but ribbons were awarded

The horse show was postponed by a week due to rain, but it was held.

They had a good premium sale.

“Right before the sale, traditionally, we would bring out all of the youth in the round robin and recognize them, or we would bring out judging teams to talk about how the year went, buy because of COVID-19, we only announced the winners of the Round Robin the sale went well,” he said.

Kids save some of the money to put back into their animal, including paying for feed, and save some money for their college funds.

Kurt and Holly put the exhibits, the ribbons and the awards in a plastic bag and let the families come by and pick it up.