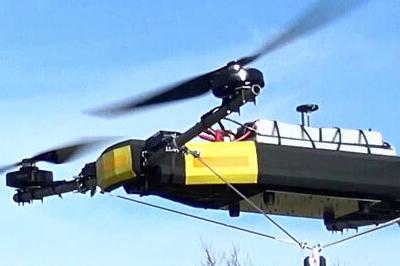 The MR Dauntless UAV is shown here in flight. It will carry the HNO Aerial Spreader as it flies over the plots. 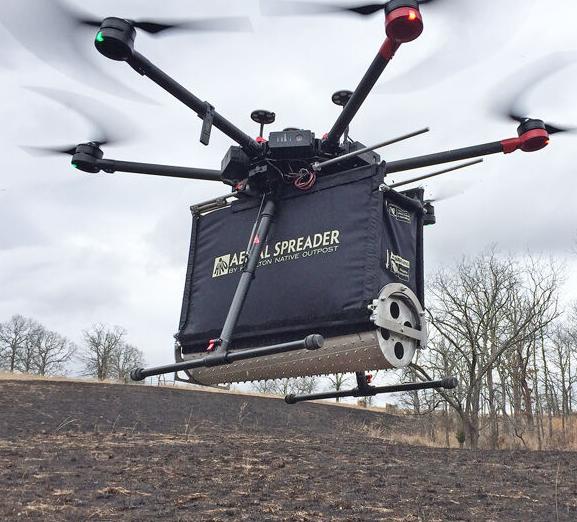 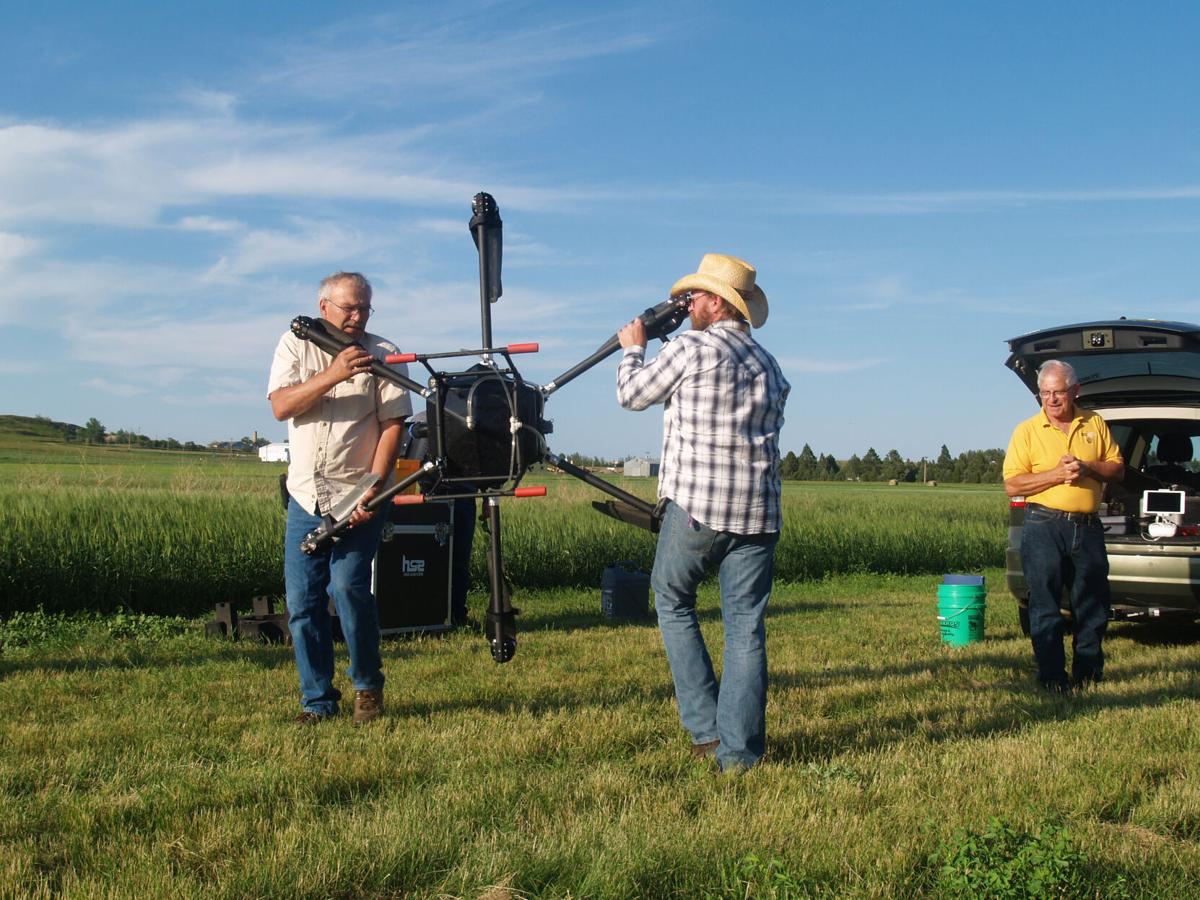 John Nowatzki, NDSU ag machines specialist, at right, demonstrates UAVs in ag at field days. In the future, the new Aerial Spreader and MR UAVs may be demonstrated to producers during a field day.

North Dakota State University is collaborating with Mobile Recon (MR) Systems and HNO (Hamilton Native Outpost) Aerial Spreader on a venture to seed cover crops with unmanned aerial vehicles (UAV), especially in small areas that are difficult to seed with a tractor – such as in a saline seep or wetland.

The university was awarded an APUC grant to research the venture.

“The objective of the project is to demonstrate the effectiveness of using UAVs to plant cover crops,” said John Nowatzki, NDSU Extension agricultural machine systems specialist in the Department of Agricultural and Biosystems Engineering.

The MR UAV flies the HNO Aerial Spreader over the field, and seed is rolled out from under the spreader’s hopper.

The application rate on the seed can be varied.

NDSU will be examining whether the seed is evenly distributed as the UAVs fly over and roll out seed at the NDSU Agronomy Seed Farm at Casselton.

“We’ll be measuring how even the seed can be spread from three different MR UAVs across the flight pattern,” Nowatzki said. “As the UAVs fly over, we’ll collect seed in containers to measure that.”

They plan to compare the evenness of the seed spread at different heights above the soil.

“The MR UAVs can fly at different heights above the ground, whether it is 3 feet or 300 feet,” he said.

NDSU will also be examining the effects of airspeed and rotor vortices on seed distribution.

“We’ll be flying and comparing the UAV at different speeds to see which speed works best to evenly distribute seed across the soil,” he said.

Tom Nickell, CEO of MR, said since the hoppers from the aerial spreader are mounted on the bottom of each model of UAV, they would distribute seed downward without any interference with the aircraft or its landing gear.

There are several options for using cameras with the MR UAVs.

“We have multiple options for camera mounting locations,” Nickell said. “For this cover crop project, we’ll use our first-person view GoPro Hero camera mounted on the front of the aircraft. It will rotate so it can be the eyes for the pilot and look down at the seed distribution.”

NDSU plans to research how accurate the UAVs distribute seed as it is dropped from the spreader.

“For example, if we are dropping camelina and it should be planted at 10 pounds per acre, we want to fly it at different heights and speeds and see if that 10 pounds per acre is being accurately distributed across the flight pattern,” Nowatzki said.

In addition to those objectives, NDSU will watch to see if the seeds germinate and what percentage of seedlings emerge. In order to do that, they plan to fly the UAVs at NDSU sites at Casselton and Prosper.

“One of the concerns farmers have is with emergence. If you are just putting this seed over the top of the ground and not packing it into the soil, how much is actually germinating,” he said. Planting cover crop seeds with a drone just before a rain could enhance the germination rate. “A hard rain could impact the soil, and we would want to look at emergence after that event,” he said.

The NDSU agronomists will be seeding both single and mixes of cover crops, including flaxseed, winter rye, annual rye, turnips and winter camelina, among other seeds/crops.

NDSU has partnered in the past with companies to bring UAVs in agriculture to North Dakota producers and ag businesses.

“We are also involved in the project to enhance the chances of the companies like Mobile Recon Systems to establish a business here in North Dakota,” he said.

Mobile Recon Systems moved from Kentucky to Grand Forks, N.D., in 2020 to research, develop, manufacture UAVs and develop more markets, including in agriculture.

“North Dakota has many factors that make it promising for drone operations, including low population density, statewide support for a Beyond Visual Line of Sight network allowing flying over large areas, and a strong ecosystem supporting the drone industry,” Nickell said.

Initially, they plan to fly their KittyHawk MR-10, which will carry the HNO Aerial Spreader unit and approximately 8 pounds of seeds.

“The MR-10 has 28-inch and 30-inch propellers in combination with each other,” Nickell said.

Mobile Recon Systems also wants to test its RavenHawk MR-20, which is optimized for carrying approximately 20 pounds of payload (seeds), but can actually carry up to 50 pounds.

The propellers on both of these units are nearly identical in size.

The MR-20 will be the main focus of the NDSU project.It has a 20-25-pound payload, with testing of propeller wash from 28-inch propellers.

“The Dauntless uses 40-inch propellers, so has an even larger spreading range, and it can carry a payload of 100 pounds or more,” Nickell said. “That will enable carrying multiple hoppers, giving the flexibility for multiple seed options, and longer flight times, enhancing the economics of the total package.”

NDSU is applying to the Federal Aviation Administration (FAA) for a Certificate of Authorization to fly the Dauntless UAV, as UAVS weighing more than 55 pounds on takeoff can only be flown commercially with FAA permission.

“Mobile Recon Systems has the Dauntless built, but they are redesigning it, so the HNO Aerial Spreader will fit it,” Nowatzki said. “We’ll see spreaders on all three Mobile Recon models.”

The UAVs will be ready for operation this summer.

According to Knepper, Aerial Spreader Drone Services (ASDS) is a Missouri-based company that helps farmers and landowners with their agriculture and conservation land management goals through aerial applications.

“The team began prototyping designs with beneficial conservation seed mixes three years ago. Our first-use cases were in the timbered, rough terrains of the Ozarks region where traditional land-based equipment could not reach,” Knepper said. “We were evaluating what an industrial drone-based system would look like and what practices would provide good conservation practices.”

Knepper said he met Tom Nickell with Mobile Recon Systems through ITEN, an entrepreneurial support organization, a couple of years ago.

“I was searching for U.S.-based industrial drones and local support for our sales and service business model,” he said.

“The aerial spreader has been, or is being used, in projects that provided timely seed mix solutions for wet or recently flooded areas where the seed germination was aided with the right amount of moisture,” Knepper said.

The spreader has also been used in projects that interseeded cover crops into production row crops where the drone could sense current conditions and change its application rate.

It has also been used extensively in woodland and other restoration projects.

In the NDSU project, the aerial spreader will carry the cover crop seed in its main compartment hopper unit that has a hopper capacity of 1.5 cubic feet.

“It spreads seeds or other dry materials, including fluffy material, anywhere a drone can fly,” Knepper said.

As it flies over the area to be seeded, the drum rotation on the unit rotates the seed out of the hopper, according to the application rate set by the producer.

“The drum rotation on the unit varies to accommodate different seed or material sizes, density and application rates,” he said.

Knepper would like to see the aerial spreader used in interseeding cover crops for larger plant biomass and increased carbon credits for the producer; precision, cost-effective spot applications over large, traditional land bases; for use in conservation mix applications for increased soil health and wildlife/pollinator habitats; as well as gas and oil well reclamation applications in challenging terrains.

Nickell said Mobile Recon Systems is the first drone manufacturer in North Dakota. He hopes they will be able to assist producers in the state, and in the U.S., especially with planting in-season cover crops.

“The advantages include timelier planting of cover crops, less damage to growing crops, and reduced labor and equipment costs,” he said.

Nickell said the project would be the first step in research demonstrating the efficacy of using the UAV’s method of seed distribution, using a patented method for difficult-to-flow seeds.

“Follow-up research will prototype optimal methods for this distribution, by seed type, which will be used to test the germination and confirm the economics for the North Dakota farmer, rancher, and land management specialist,” he added.

Nowatzki feels the best use of these new UAVs could be in small areas where a planter could not go.

“If there are wetlands that are too wet to drive a tractor into to plant cover crops, this would be a good way to seed,” he concluded.

With any generational farm, traditions are passed down through the years. For the Feland family in north central North Dakota, a family tradit…

The top 5 finalists for the Farmfest Woman Farmer of the Year Award have been selected. IDEAg Group, LLC., producers of Minnesota Farmfest, wi…

Pulse USA, a pulse crop and forage seed company based in Bismarck, N.D., is now fully-owned by some of the employees who work there.

PAGE, N.D. – Producers often have ag camera systems on their semi-trailers so they can check on their grain as it gravity feeds or the auger l…

AGCO-Amity JV, LLC (AAJV), the company that markets the well-known brand names of Concord, Wil-Rich and Wishek, today announces that it has be…

The MR Dauntless UAV is shown here in flight. It will carry the HNO Aerial Spreader as it flies over the plots.

John Nowatzki, NDSU ag machines specialist, at right, demonstrates UAVs in ag at field days. In the future, the new Aerial Spreader and MR UAVs may be demonstrated to producers during a field day.