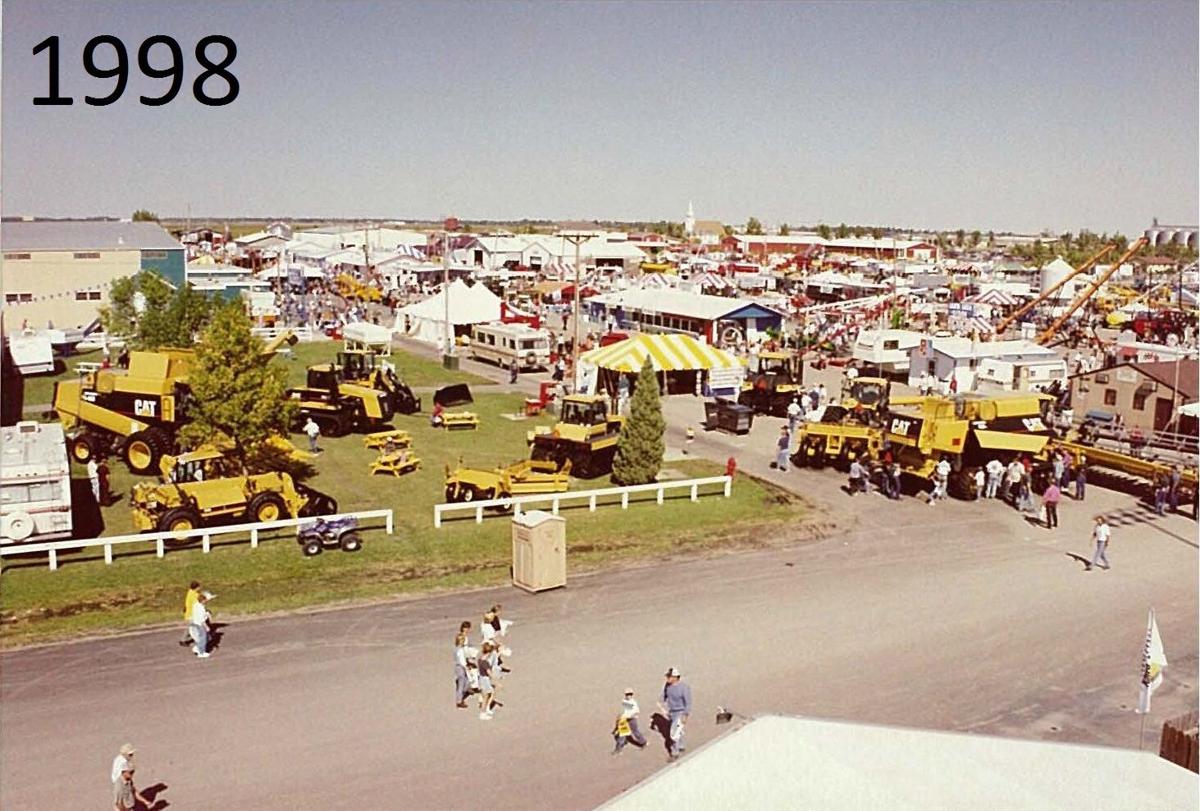 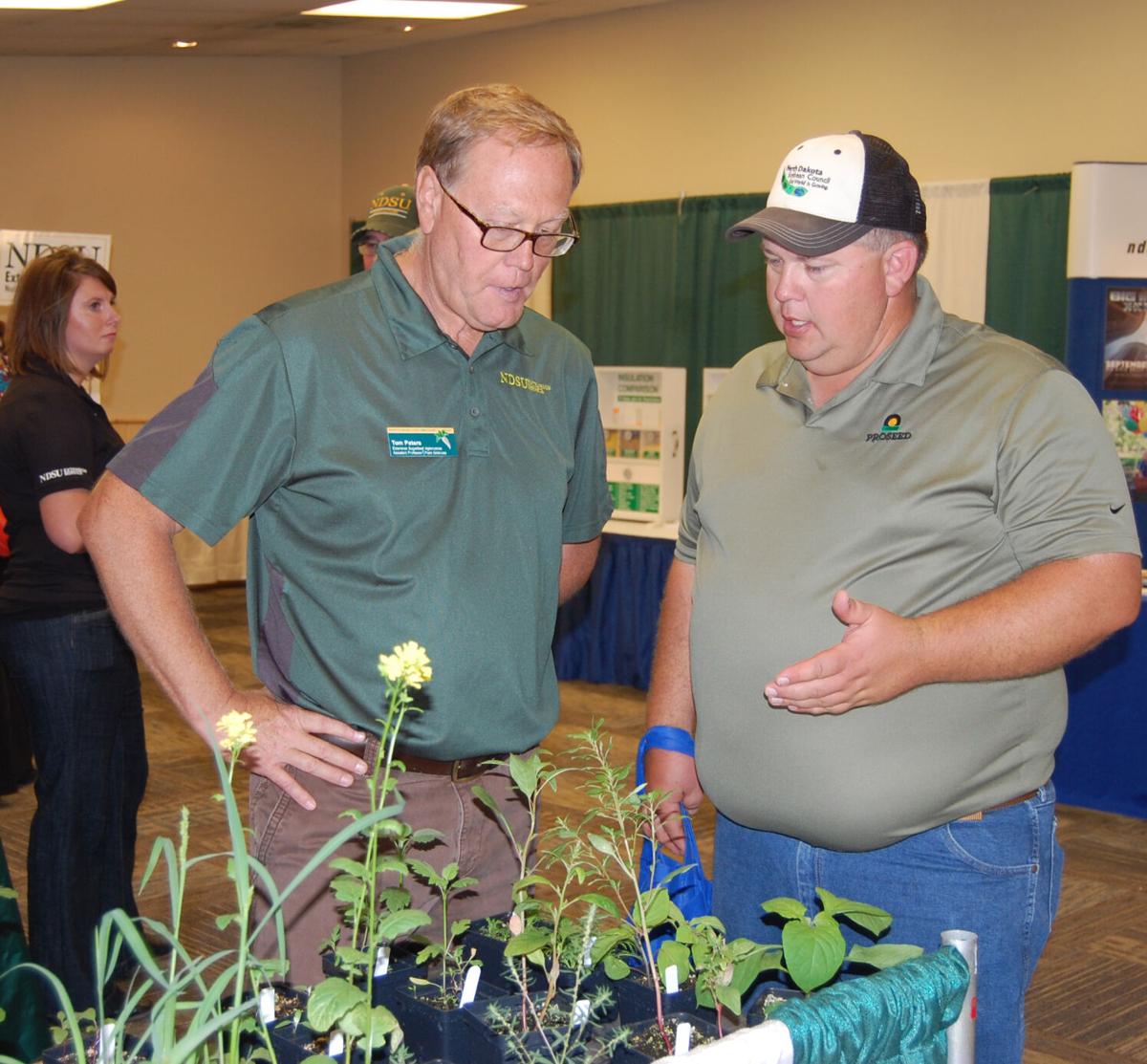 Answering questions and sharing new information has always been an important part of the land-grant institution and Extension’s work at Big Iron.

Answering questions and sharing new information has always been an important part of the land-grant institution and Extension’s work at Big Iron.

What began as a tillage equipment field demonstration in 1980 has become a multinational event with over 900 exhibit slots and thousands of products and services.

Through four decades that included seven presidents, the farm crisis of the 1980s, changing weather patterns and much more, tens of thousands of farmers have travelled annually to Big Iron held at the Red River Valley Fairgrounds.

What has made this show so successful? How does Big Iron continue to draw large crowds from the region and beyond?

It started with a team of four Red River Valley farm equipment leaders who knew what it took to put together a great farm show.

Perhaps as a bellwether of challenging soil conditions ahead – and the need for innovative soil preparation equipment – the location was rained out. Organizers quickly moved the event to the NDSU Agronomy Seed Farm in Casselton, N.D.

Hoping for 400-500 farmers to attend, the men were thrilled when 1,220 interested farmers attended. The great turnout enticed them to plan a large outdoor machinery show for 1981.

“Big Iron was a dream of a group of innovative ag pioneers who wanted to showcase machinery and give producers a chance to learn about farming practices,” said Mike St. Onge. As a Big Iron board member for 19 years, St. Onge served as a frequent spokesperson for Big Iron.

Early in 1981, Marvin Witt, manager of the Red River Valley Fair, heard about the idea of holding a large farm show. He said the fair was interested in helping to sponsor the event and providing a location.

Prior to the 1981 show, Humfeld, Conn, Spichke and Anderson wrote a framework to guide the farm show. They knew what they were doing, as their initial show guidelines led to the show’s success all of these years.

These included keeping all exhibits agricultural-oriented. Admission was free to the public with vendors paying for booth space to finance the show. The board members would be made up of Big Iron vendors, and booth space would remain reasonably priced with no surprise fees.

The show was set up to run Tuesday, Wednesday and Thursday from 9 a.m.-5 p.m., which would allow vendors to set up on Monday and take down on Friday.

Big Iron, from the start, was scheduled for that window of time after small grain harvest but before row crop harvest moved to a full-time operation. Field demos were offered, but no music bands or fair-type activities were allowed that would distract from the show.

The show was set up to benefit exhibitors, as well as farmers, said St. Onge.

“Our theory was that a show that had happy exhibitors would attract customers,” he said. “The real customers for us – that made our show successful – were the exhibitors.

“That’s why we always provided free forklifts and took extra time to make sure they got unloaded and loaded at their convenience,” he continued. “We wanted to make sure people found this to be a good experience when they came to exhibit.”

“We promoted the use of the dollars of profitability that we made from Big Iron, to the reinvestment in the future of agriculture through that,” St. Onge said. “For example, more paving, more buildings, and better drainage. Anytime you can reinvest the money you make back into making something better, that is a good investment.”

In 1983, the land south of the fairgrounds was purchased by the fair. West Fargo Bank loaned the money, and annual payments were made from the Big Iron funds.

Over the years, Big Iron profits have also paid for the doubling the size of the carnival grounds, new buildings and a large tarred machinery lot for Big Iron that is used for parking during fair events.

In 1985, a fun women’s program under the direction of Janice Rustad, Red River Valley Fair board member, was added to Big Iron and continued successfully for many years. An entire building was devoted to crafts and items for the farm home. A noon luncheon, with entertainment, style show and plenty of giveaways was a great hit for many years.

As Big Iron grew over the years, the governing committee also changed. Jim Conn left the area, replaced by Larry Rittgarn of Cargill, Inc. The death of Dennis Humfeld created another opening on the board, filled by Warren Rust of Harwood, the first retail dealer on the board, according to notes from Anderson, who wrote a five-page-summary of Big Iron’s first 10 years.

In 1989, the board was expanded by the addition of Steve Alm of Horvick Manufacturing, Phil Tintes of Dakota Truck Equipment, and Kevin Johnson of Farm Builders.

KFGO and the Fargo Forum provided initial publicity for Big Iron. In fact, the show was going to be called the “Red River Agribusiness Equipment and Service Exposition,” but that was too long for use on the radio. KFGO’s Larry Ristvedt and Bill Hoverson are credited with coming up with the name, “Big Iron.”

“Over the years, many companies have chosen Big Iron as the place to introduce new products for the first time,” Anderson wrote. “This is because this area of the country is truly the breadbasket of the world and the ag capital of America.”

Notes from Big Iron founder Lynn Anderson were used throughout this piece.