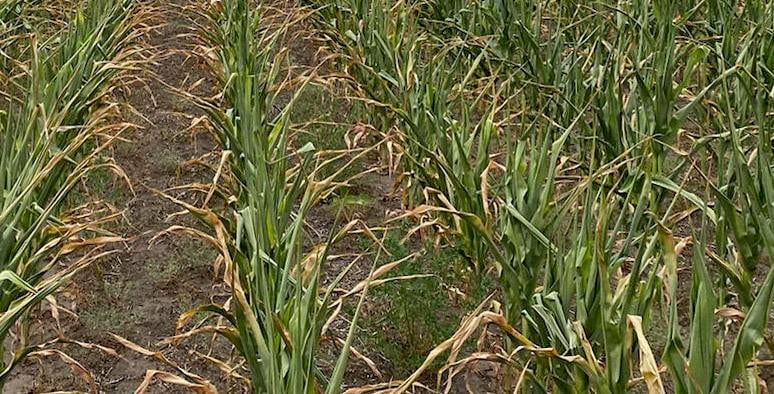 Corn in the central region of the state has not grown very tall, as of July 28, due to the drought. Submitted photo by Travis Evenson. 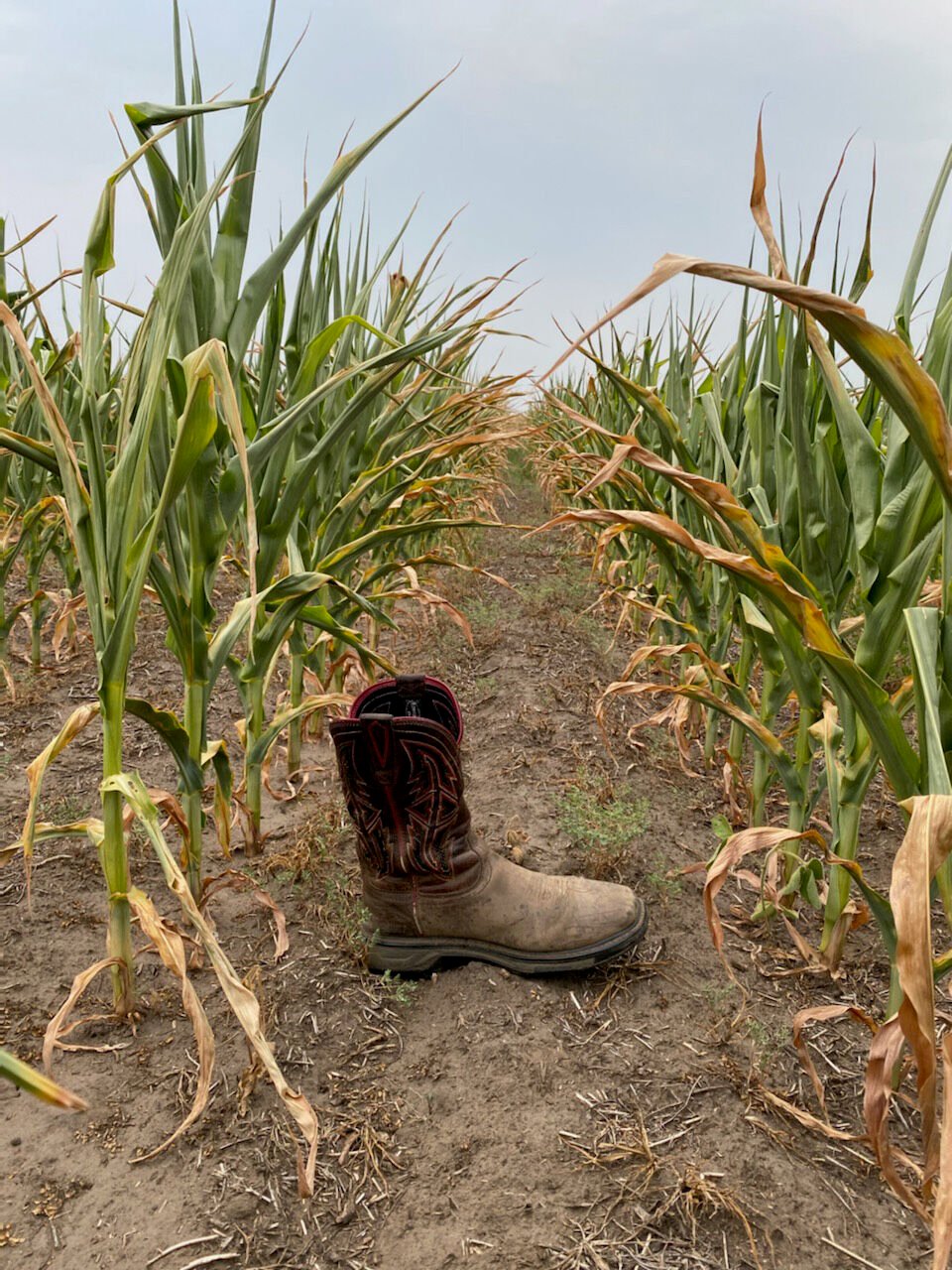 Cow/calf producers in the central region of the state were counting on corn silage to help them get through the winter. But some of it is not very high, and that includes corn for grain, as well. This boot shows how high the corn is near Washburn, N.D., on July 28. Submitted photo by Travis Evenson.

Very little rain fell in July throughout North Dakota, and combined with many days of high heat, feed crops for livestock – hay, corn silage, oats and others – have been severely reduced.

Wes Dvorak, chair of the North Dakota Beef Commission and a cow/calf commercial operator of a heifer replacement feedlot southeast of Manning, N.D., says he’s been haying during the night, starting at 1 a.m. and wrapping up around 9 a.m.

“There is more humidity at night so baling all night long saves as much hay as possible. It saves the leaves, the stems, and the straw and keeps it from crumbling all up,” Dvorak said.

The hay is short from the lack of rain and dries out in the field before it can be cut.

“With this heat, it just dries out hay to nothing in a matter of a day or two,” he added.

But the hay bales are light on tonnage and grazing lands are short, especially in the center of the state.

“I need 1,150 bales of hay for winter feed to keep my cows. We are slowly getting there, but it has been pretty dry,” Dvorak said.

Ranchers not receiving moisture won’t be able to plant a cover crop for fall grazing, and everyone is searching for feed supplies.

“Guys are trying to scrap together anything they can to keep as many cows around as they can,” he said.

Dvorak’s hay fields and pastures received more moisture than some in the spring at least – but then the spigot shut off.

“I am in the west central part of the state. We got some rain early on, but we haven’t received anything since then,” he said. “Everything looked good the end of May, the beginning of June, and then from June through July, we received about an inch of rain.”

Dvorak said the bales in his area are ranging from a quarter of normal to a bale and a half per acre.

Many cow/calf producers have had to sell more cattle than usual this summer.

“Here in the west central area, guys have probably sold down 25-30 percent, but as you go closer to the central part of the state, some guys sold 70-100 percent of their herd,” Dvorak said. “Some of those guys were forced into taking early retirement.”

The area south of Minot, including Towner, Harvey, and Rugby, is “probably the worst” area for ranchers having to sell off herds, he said.

Jason Zahn, a director on the North Dakota Beef Commission, ranches near Towner, which is in one of the driest areas in North Dakota.

Weather conditions have not improved over the summer and the region is very dry, he pointed out.

“Conditions haven’t improved. There has been a little moisture to the south of us that will help some of us, but it doesn’t look very good around here,” Zahn said.

With the weeks of high heat in July, it ruined his silage corn crop to feed his cattle this winter. Zahn said they were banking on getting a silage crop to supplement with cattails and other alternative forages.

“Our silage corn is completely done now. It turned brown. We are going to look at grazing a little bit of it if we don’t have any nitrates in it, so we will be getting it tested,” he said.

One of his fields was so dry that the corn crop did not even emerge. In the fields that did emerge and the corn grew, its growth stopped at about 2.5 feet tall, so there is not a lot of forage there anyway.

Zahn said the grasshoppers have also moved in.

“The hoppers are pretty bad here,” he said.

He sold 75 head of cattle in June, some older cow pairs.

“A lot of people in the Towner area have sold off cattle to get through the summer with the grass we have. We still have a long road ahead of us if we are going to maintain the numbers we have now,” he said.

Zahn doesn’t know if there would be any corn silage available to buy on the market.

“If some of this grain corn doesn’t make a kernel, maybe some farmers might sell it,” he said. “That is a big ‘maybe,’ but that is what we are holding on to now.”

Zahn is planning to head northeast of Devils Lake to hay some of CRP land to help him hold on to the cows he has now. Losing any more genetics would make it tough, he added.

“We are hopeful we can get over there and put up some more hay,” he said.

Zahn said he is “fortunate to be part of an irrigation district,” from the Mouse River, so was able to get a little water on some of his land.

“We hayed some hay fields (at our ranch), and it probably was 40 percent of normal, but we were fortunate to have the water, so that made a big difference that we could hay some of ours anyway,” he said. “Some people in the Towner area were not so fortunate and did not get any water on their hay meadows.”

Zahn will be weaning early this year, probably in mid-September.

“We will wean early and hopefully can find someone to background them for us,” Zahn said. “Without any corn or hay supplies here, it would be tough to feed them here.”

Zahn doesn’t want to wean too early because any feedlots that would take calves will be chopping silage in August.

“They have silage in their yards, too,” he said.

How is the North Dakota Department of Agriculture (NDDA) helping producers?

The State Board of Animal Health decided to grant a summer grazing exemption. Cattle can be moved out of state to graze and don’t need as much identification work when returning. However, they cannot be comingled with other herds.

For more information on the program, please visit https://www.nd.gov/ndda/news/state-board-animal-health-grants-summer-grazing-exemption-due-drought.

The program will reimburse producers for 50 percent of eligible costs for temporary water supply, equipment and hauling, up to $4,500 per individual.

The NDDA will administer the program and forward approved expenses to the Department of Water Resources for reimbursement.

Program details are available on the North Dakota Water Commission’s website at www.swc.nd.gov.

The NDDA has other drought resources that they have available, and for more information, see https://www.nd.gov/ndda/drought-resources.

MINOT, N.D. – The KMOT Ag Expo, which has grown to become the largest indoor farm show in the Upper Midwest, is back again this year to reveal…

MINOT, N.D. – The KMOT Ag Expo’s informational seminars continue to be one of the most important aspects of the annual show for farmers and ra…

After a one-year hiatus due to COVID concerns, the Living Ag Classroom, one of the most anticipated and attended features of the KMOT Ag Expo,…

Despite higher commodity prices, agriculture faces many challenges in 2022

With 2021 in the rear-view mirror, North Dakota Agriculture Commissioner Doug Goehring visited with Farm & Ranch Guide to review the year …

CASSELTON, N.D. — Tharaldson Ethanol is planning to build a high protein feed facility that will open new markets for ethanol co-products at o…

Corn in the central region of the state has not grown very tall, as of July 28, due to the drought. Submitted photo by Travis Evenson.

Cow/calf producers in the central region of the state were counting on corn silage to help them get through the winter. But some of it is not very high, and that includes corn for grain, as well. This boot shows how high the corn is near Washburn, N.D., on July 28. Submitted photo by Travis Evenson.