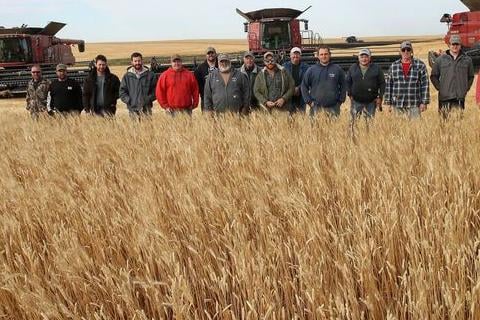 Some of the volunteers pose at the Unhjem farm with the combines and other equipment used to cut the crop. Photo by Don Anderson. 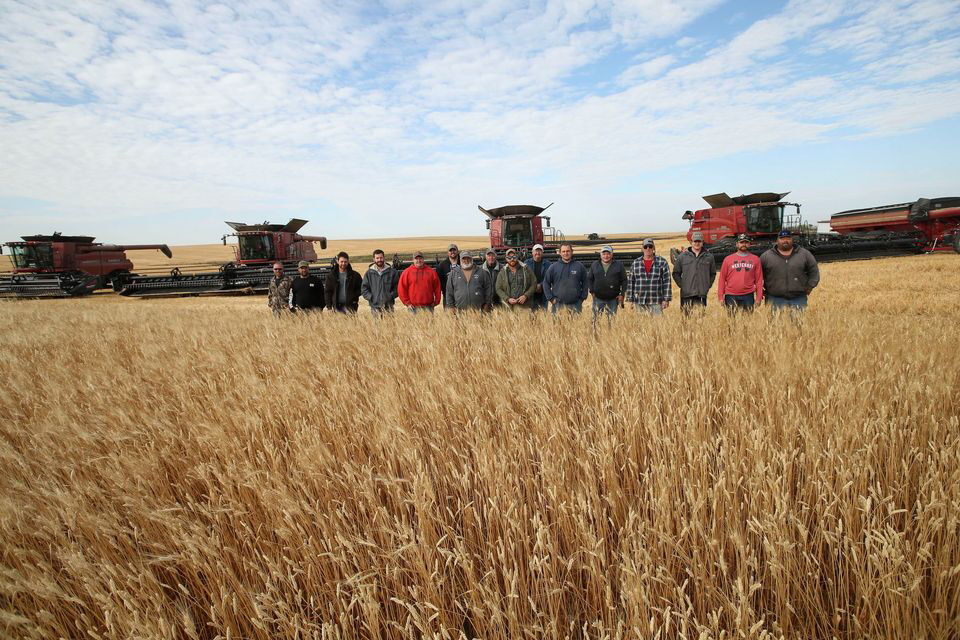 These farmers brought their own combines to the Crosby farm to combine for a fellow farmer who had a heart attack after a combine fire. Photo by Don Anderson. 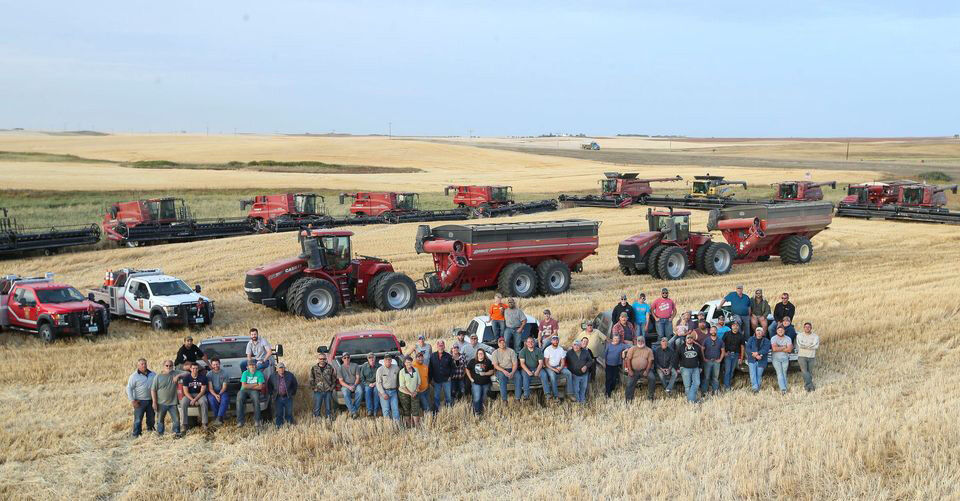 Some of the volunteers pose at the Unhjem farm with the combines and other farm equipment used to cut many acres of durum, canola and soybeans (along with bringing home hay bales and cows). Photo by Don Anderson. 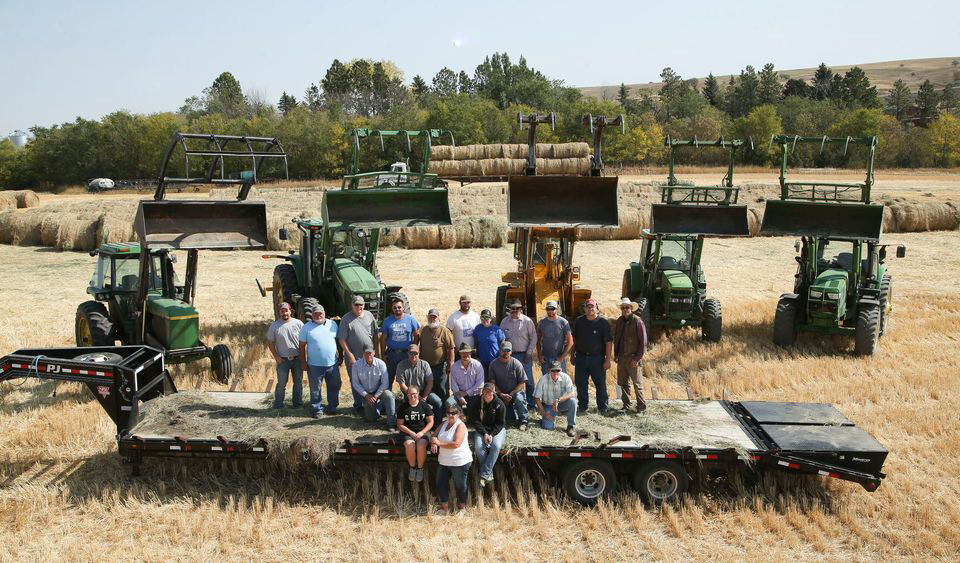 Some of the volunteers pose at the Unhjem farm with the combines and other equipment used to cut the crop. Photo by Don Anderson.

These farmers brought their own combines to the Crosby farm to combine for a fellow farmer who had a heart attack after a combine fire. Photo by Don Anderson.

Some of the volunteers pose at the Unhjem farm with the combines and other farm equipment used to cut many acres of durum, canola and soybeans (along with bringing home hay bales and cows). Photo by Don Anderson.

It isn’t unusual to see farmers and ranchers band together to bring in the crop of a fellow producer who has fallen ill during harvest.

But it is unusual that the heartwarming story of neighborly goodness sparked major media attention across the country – and the world.

From Lester Holt of NBC to the Drew Barrymore Show, to the Washington Post, USA Today, FOX, CNN, CBS, the Dr. Oz show and People magazine, writers and broadcasters clamored for interviews with the volunteers.

It seemed in the age of COVID-19, positive stories were particularly hard to find. But they found one in Crosby, N.D.

“We were surprised the media was calling us, and calling us. We didn’t expect it to happen, because it is something we do all the time for others in the community,” said Jenna Binde, who works at a local farm co-op. Binde is a close friend of the Unhjems, farmer/ranchers near Crosby.

Don Anderson, the town photographer who worked many years at the Crosby Journal, said the community is particularly close.

“No one would think twice about volunteering, helping out in any way,” Anderson said.

In mid-September, Lane Unhjem, 57, who farms/ranches near Crosby, was combining his durum on a dry, dusty day.

A spark fueled a combine fire, and Unhjem grabbed the fire extinguisher to try to put out the rising flames. While he was fighting the fire, he suffered a heart attack.

“A neighbor saw the smoke. They watch for combine fires this time of year,” Anderson said.

Unhjem was taken to St. Luke’s Hospital and then he was transferred to Minot, N.D. His family has been staying around-the-clock with Unhjem at a Minot hospital. According to the family, he will have a long recovery ahead.

Anderson reported the incident on Facebook and volunteers answered the call for help, quickly flooding to the farm. They kept coming back for several days to harvest, haul, store, load hay bales and move cow/calf pairs.

“We know there is a short window to combine the crop, and Lane only had a part-time hired hand to help,” Anderson said. “Now when Lane comes back, all he needs to focus on is recovering. Everything at the farm/ranch is done.”

Binde was at the site organizing the volunteer effort, initially talking to some farmers on her phone about what to bring.

“Everyone started calling me, wanting to help. It was such a warm outpouring – so many people wanted to bring equipment and help,” Binde said.

Anderson said he could see combine after combine, truck after truck, grain cart after grain cart pulled by tractors rolling down the highway on the way to the farm. It was quite a sight to see.

“We had 11 combines, six grain carts, and 15 semis coming down the highway, one after another, to go to work at the Unhjem farm,” Anderson said.

There were so many volunteers and so many offers to bring a combine or other farm equipment, Binde said she had to turn people away.

“We ended up having so many calls, I was turning combines down,” Binde said.

In the farm fields, Binde organized the volunteer effort into two groups. One group of farmers in combines cut in one field, while another group cut in another field.

“It was something to see – there were 60-80 people there working. No one really had to be told what to do and everyone had a job,” she said.

Binde said there is a short window to cut durum before the grain suffers from quality. No one wanted to see the Unhjem family lose their livelihood by not harvesting on time.

“It was nice grain and we wanted to bring it in on time,” she added.

Binde said farmers, one in each combine, cut the durum, stored it and then cut the canola.

“We finished the durum and canola the first day, cutting 1,000 acres in seven hours,” she said.

There are still some soybeans to cut and volunteers are already coming out to cut them.

Farmers wanted to let Unhjem market his own grain, so instead of hauling the grain to the elevator, they stored it on the farm. When the bins filled to the brim, farmers went back to their farms and brought two grain storage bags and tractors to fill them up with. They filled both grain bags.

Other farmer/ranchers in the community came back another day, bringing loaders and hauling round hay bales from the hay fields to stack them at farm headquarters.

“They hauled some 714 large round hay bales,” Anderson said.

Volunteers also gathered up the cow/calf pairs and brought them back home.

They didn’t want Unhjem to have to worry about finishing his fall farm/ranch work when he returned.

At the end of the long harvest day, farm wives and others made a giant potluck supper for all the volunteers.

“Two gals made pulled pork sandwiches, and others brought salads, desserts and other food,” she said.

As if that weren’t enough, Anderson said several community members brought Tupperware containers filled with food. They stored them in the freezer so that when the family returns, they won’t have to worry about cooking dinners for a while.

Was Binde amazed so many showed up to help?

“I wouldn’t expect any less of this community. We are very tight-knit.”

A way of life

Maybe it is an old-fashioned idea, but in Crosby, farmers and ranchers and rural folks help each other out when in need. It is a way of life.

“We help our neighbors out when they need it and we don’t expect anything in return," Binde said.

With Unhjem still in the hospital, Cassie Anne Bummer, a family friend and medical employee, says people from all over the country have reached out with prayers for his recovery.

Medical bills add up fast, even with insurance, so Bummer has set up a GoFundMe page for Unhjem.

“Lane still has a very long road ahead of him with medical bills that keep piling up.  The family wants to thank the community for everything that they have done so far to help. Words cannot explain how much it means to them during such a difficult time,” Bummer wrote.

Unhjem’s daughter, Samantha Coates, thanked everyone on the page for helping her family, not just with their funds, but with their prayers, as well.

“It is your support and your prayers and positive energy that we have shared with each other and Lane to guide us through. It has inspired him to ‘claw his way back,’ as one doctor put it,” Coates wrote.

For Anderson, the support from the community doesn’t come as a surprise.

“We are a close community. We have had many fundraisers to help others who need it, and this community is always there for each other,” he said. “It hits you deep in your soul the way people here help each other.”

While prices for commodities and cattle have not been high in recent years, it doesn’t matter. People in Crosby continue to give.

There have been many fundraisers in the community, but they continue to dig deep to help others.

The media attention has been huge over what happened to Unjhem, and Anderson said he has even heard from news writers in the Netherlands, South Africa, Germany and India.

“Everyone wants to know about our tight-knit community,” he said.

Thousands have been posting and sharing the incident, according to Anderson. Several posted how they appreciated a “beautiful story” in these times of COVID-19, putting it into their own words.

Donita Johns posted, “What a great tribute to farmers,” and Lynn Myers wrote, “What a beautiful family of farmers – so proud of all you do.”

Of course, folks in North Dakota are posting, too.

Susan Bley said, “I’m proud to be from North Dakota. People coming together and helping each other is heartwarming.”

Recently, Anderson posted, “The Unhjems have a beautiful crop that will be safe in the bins today, and more importantly they have the comfort of knowing that they have a community of friends that are helping, praying and doing whatever they can to help them get through this tough time. What a great sense of pride we can all have knowing that when we face something like this, we’re not alone.”