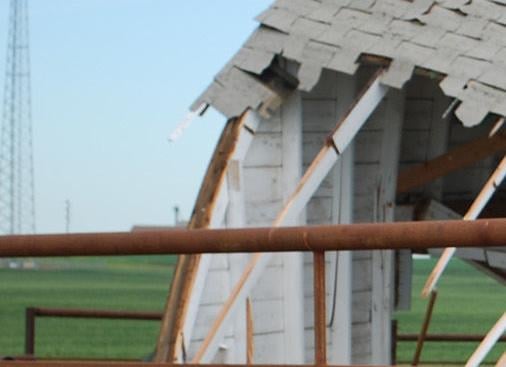 This building at the Hettinger County Fairgrounds was damaged when a tornado hit the county last year on July 12. It is being replaced, thanks to many donations. 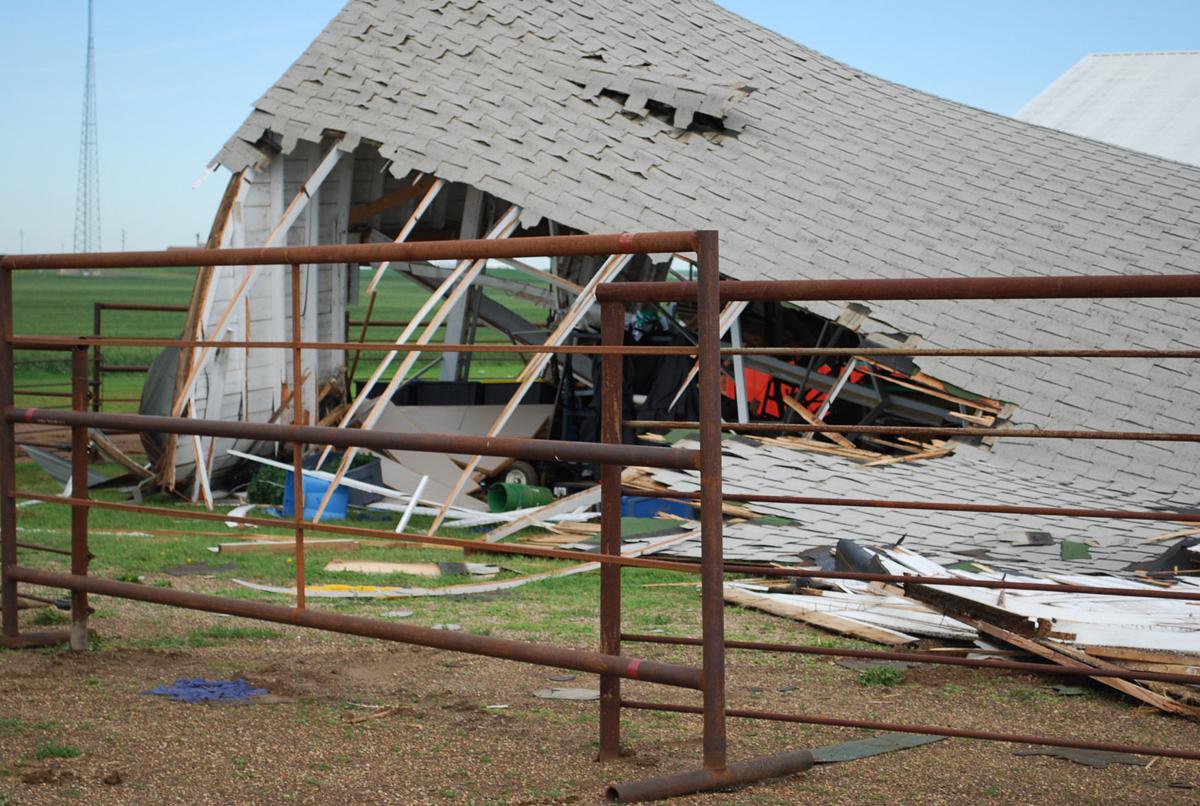 This building on the fairgrounds was destroyed in the tornado last year. They will be building a new one.

This building at the Hettinger County Fairgrounds was damaged when a tornado hit the county last year on July 12. It is being replaced, thanks to many donations.

This building on the fairgrounds was destroyed in the tornado last year. They will be building a new one.

MOTT, N.D. – It was a sad story for the 4-H kids – and everyone – in Hettinger County in the southwestern region of the state last year.

On the last day of the fair, July 12, an EF-1 tornado struck the area. While Hettinger County 4-H kids had just hauled their livestock home, their 400 exhibits filled with ribbons and awards were left in the large storage building next to the judging building, and all were destroyed.

“We lost buildings, including the 4-H and heirloom exhibit building, but we didn’t have any loss of life or livestock due to the tornado,” said Duaine Marxen, NDSU Extension agent for Hettinger County, based in Mott.

Marxen said crops in the path of the tornado were damaged, along with grain bins and other buildings. In addition to 4-H exhibits, heirloom exhibits, such as old photos of veterans and others, were destroyed.

In 2020, it will be a different story for the 4-H, their leaders and all the citizens of Hettinger County. Because of the devastation last year, there will be a county fair and 4-H exhibits this year.

“We want to make it up to the 4-H kids and everyone in the county. We are planning a county fair this year,” Marxen said. “Because 4-H is owned by NDSU, the county fair’s 4-H shows and fair must adhere to NDSU COVID-19 rules, and we will be able to do that.”

The fair will be a week long, from Monday, July 6, through Saturday, July 11. The extended fair will allow all exhibits to be viewed and judged, all while allowing the kids to spread out and show safely.

In addition, the fair will have a huge demolition derby and performance by country singer and songwriter, Darryl Worley, on the last day of the fair.

However, one of the fair’s main events, the pancake breakfast, will not be held this year due to difficulties in being able to properly distance individuals, according to COVID-19 separation rules.

Due to the cancellation of the North Dakota State Fair, Hettinger County 4-H’ers won’t be able to take their exhibits to the fair for the second consecutive year, but according to Marxen, there’s a plan to help make up for that.

“It was sad for the kids when they had worked so hard on their 4-H projects, but they will be able to bring their past exhibits with them, and take them next year to the state fair. They’ll be eligible to win ribbons for those past projects,” he said.

This year, on Monday, July 6, the Hettinger County Fair will hold their horse show, but it will be held in New England rather than Mott.

“We can’t have more than 10 people exhibiting at one time because of the NDSU COVID-19 rules, so we needed to move the horse show to New England to ensure the kids can spread out,” he said.

There are many kids involved in taking horsemanship classes at Mott, New England and Regent, along with three teachers.

“We are so appreciative to have three teachers for horsemanship. That is unheard of. Because of that class, a lot of kids are involved with horses and that includes a lot of kids in 4-H,” Marxen said.

In 2019, Hettinger County had 11 4-H kids showing horses, and this year they’ll have at least that, maybe more.

On Tuesday, July 7, the 4-H projects will be shown.

On Wednesday, July 8, there will be a non-interview day with the 4-H projects and 10 judges. In a normal year, each 4-H kid would be interviewed about his/her project/projects with the judges.

“Basically, I will show each project to the judges. We won’t have the 4-H kids there,” Marxen said.

Marxen expects only a few kids will be showing those animals, so it won’t be a problem to spread out and come in at a certain time.

On Saturday, July 11, the last day of the fair, there will be the demolition derby.

“While the county fair is mainly about 4-H’ers and their projects and shows, everyone comes to the demolition derby. It is so popular,” Marxen said.

Because Hettinger is one of the few counties in the state having a fair this year, Hettinger was able to pick up extra drivers and cars that would have been entered elsewhere.

“We will have some 44 cars at the demolition derby at the fairgrounds, and that will make for a great derby. It will last six or seven hours. We’ll be able to spread the crowd out along the whole route, so there will be no problem following COVID-19 rules,” he said.

While the tornado destroyed the building and the exhibits it held, Hettinger County is in the process of building a new one.

Marxen said the county has raised money for a new building, and it will be an all-seasons building that will be able to host county events.

They plan to combine it with a building already on the fairgrounds that has bathrooms and a kitchen, so they won’t have to rebuild those. The combined building will be some 6,000 square feet, and will be able to hold additional events during the year, besides 4-H and heirloom exhibits for the fair.

“We’ve gotten a huge amount of support from the county and outside of the county for the building. It’s a labor of love and a love for 4-H,” Marxen said. The county matched the first $50,000.