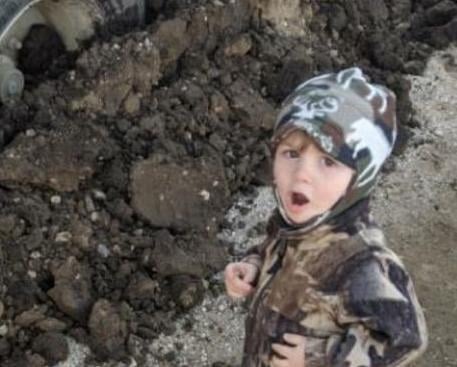 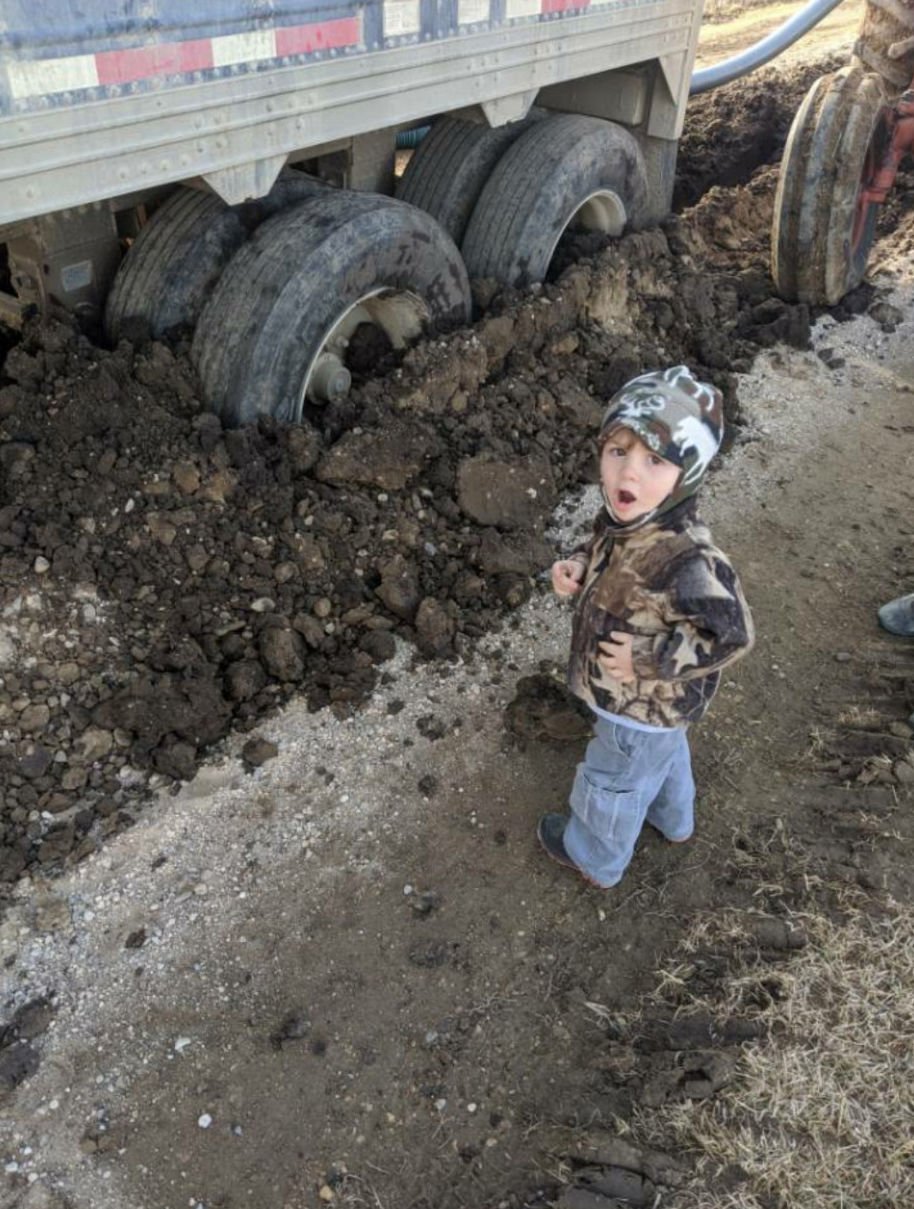 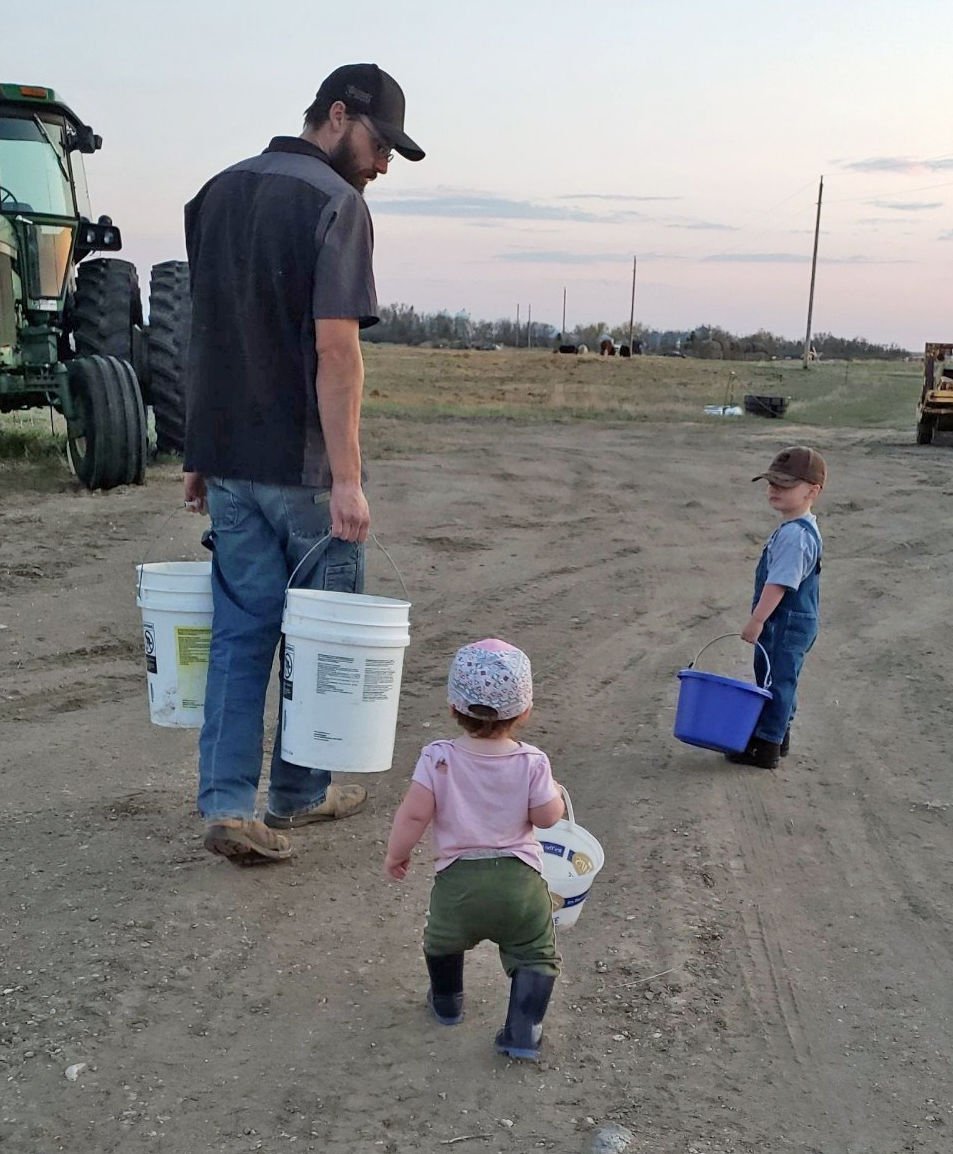 Shane Anderson and his two kids, Colt and Barrett, carry peas to go feed the cows.

Colt Edwards drive his peas out to feed the cows.

Colt Edwards likes to drive his own little John Deere tractor out in the fields and pretend to be stuck. 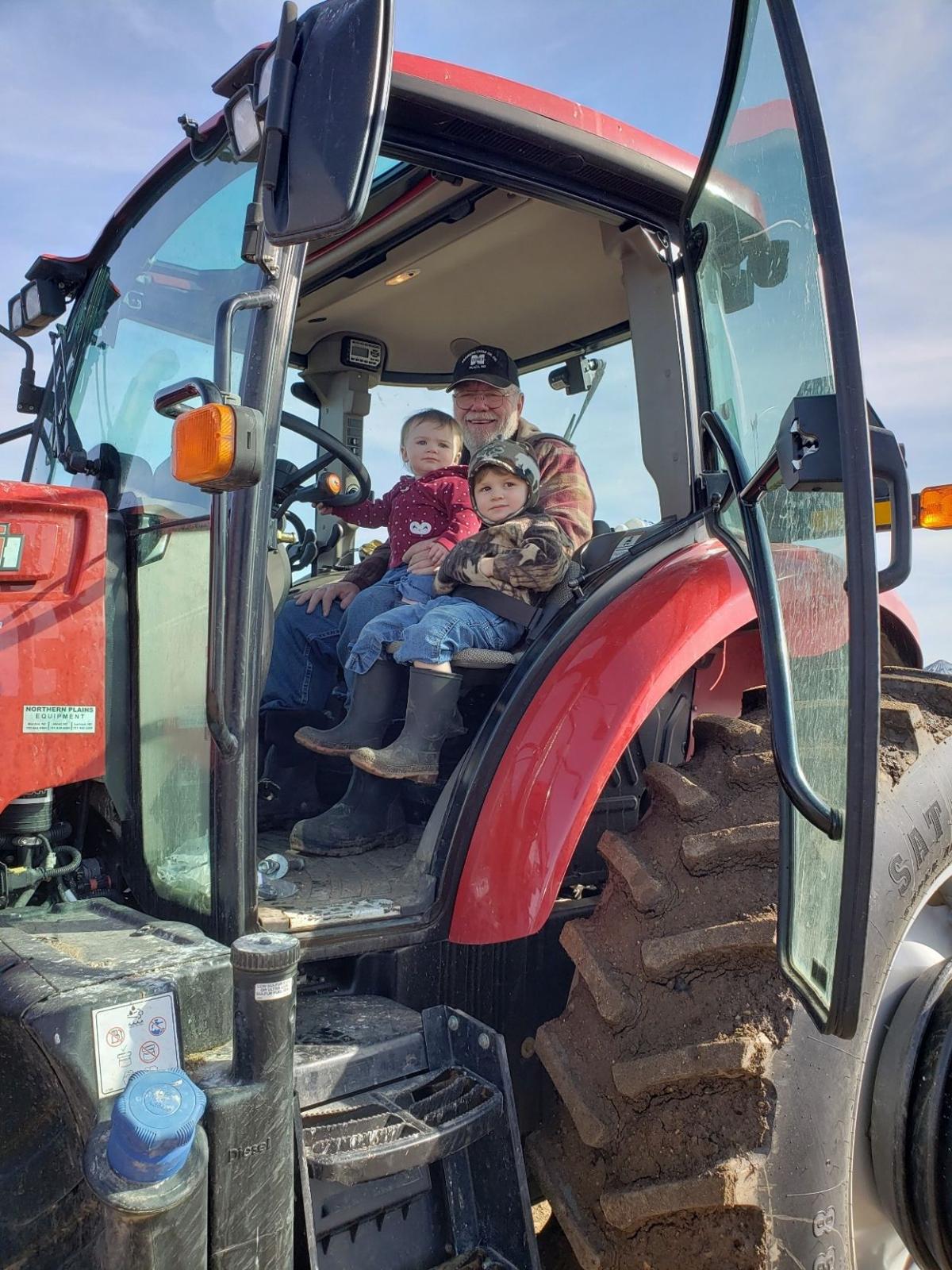 Shane Anderson and his two kids, Colt and Barrett, carry peas to go feed the cows.

Colt Edwards drive his peas out to feed the cows.

Colt Edwards likes to drive his own little John Deere tractor out in the fields and pretend to be stuck.

PLAZA, N.D. – How many 2-year-olds love watching “stuck tractors get unstuck,” and then clap and cheer when the farm machines are pulled out?

Cindy and Leo Edwards, who farm northwest of Plaza, N.D., have eight grandchildren, three of which live near the family farm. Colt is their 2-year-old grandson, and he loves to cheer and celebrate when “stuck tractors get unstuck.”

The Edwards farm with their son, Curtis, and daughter-in-law Kimberly. Curtis and Kimberly have a son, Rhett, and live close to the farm, about a mile away.

The Edwards are also fortunate to have their daughter, Ashley Anderson, son-in-law Shane, and their two kids, Colt and Barrett, living close to them, as well.

Shane and Ashley own the north half of the home quarter and have a small cow/calf operation with a few pigs and chickens, as well.

Little Colt has made his parents and grandparents laugh many times this spring, especially with all the stuck tractors and other farm machinery in many parts of North Dakota due to wet conditions.

“It seems like we have been getting stuck here on the farm nearly every other day. Our soil is saturated in parts,” Cindy said.

When Colt comes over to visit his grandparents, he likes to watch videos or tractors getting stuck on YouTube.

“When he watches the stuck tractors, he says, ‘uh-oh stuck’ and cheers and claps his hands every time the tractors get unstuck,” Cindy explained.

Colt is always in a hurry to see the machines get pulled out of the mud.

Earlier this spring, Colt’s uncle, Curtis, was driving the semi-truck, loaded with grain, down his parents’ driveway and got stuck.

Due to COVID-19, Ashley was working from her parents’ home that day.

“Colt got to see the whole scenario unfold right in front of his eyes. He was very excited to see the stuck truck,” Ashley said.

Cindy and Colt went out in the side-by-side to see it close up.

“Colt and I went out to watch ‘Unco’ (what Colt calls his uncle) get unstuck. Grandpa Leo had to go get the tractor to pull them out,” Cindy said.

With so much excitement, Colt had to get out of the side-by-side to check it out for himself.

That is not the only photo of Colt. His parents and grandparents have taken many pictures of him being the “little rancher” on the home ranch.

“Colt sure does love all the animals on the farm. He is such a sweetheart. When he walks with a bucket of peas to feed the cows, he yells, ‘Come Boss!’ It is probably the cutest thing I have ever heard,” Cindy said.

Colt always wants to go with his Dad to check on the cows, and now Barrett has joined in to help, as well.

“He insists on going no matter how cold it might be. He comes back in to tell his Mom, “Feed peas to moo-moos,” Cindy said.

At the farm, Cindy, who works at the bank in town, comes home to help with the farming after work until dark.

This spring, they are seeding durum, peas, canola and soybeans.

“It has been a very wet spring to get the crops planted in a timely manner this year,” she said.

Cindy helps when she is needed with rolling peas and soybeans in the spring and running combines in the fall for harvest.

“We’ve only been raising soybeans for a few years, and we find it helps to roll the fields to help push the rocks back into the ground to make it easier to combine fields in the fall,” Cindy said.

Cindy and Leo are looking forward to more fun, watching their future little farmers play on the family farm. They plan to keep snapping photos of all of their grandkids.