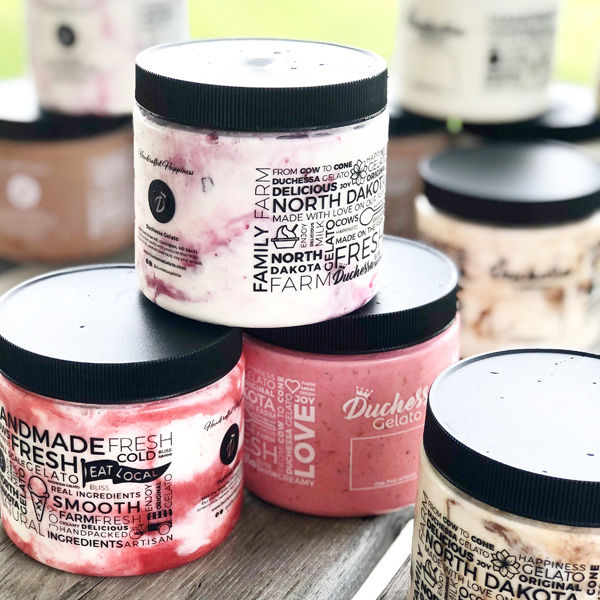 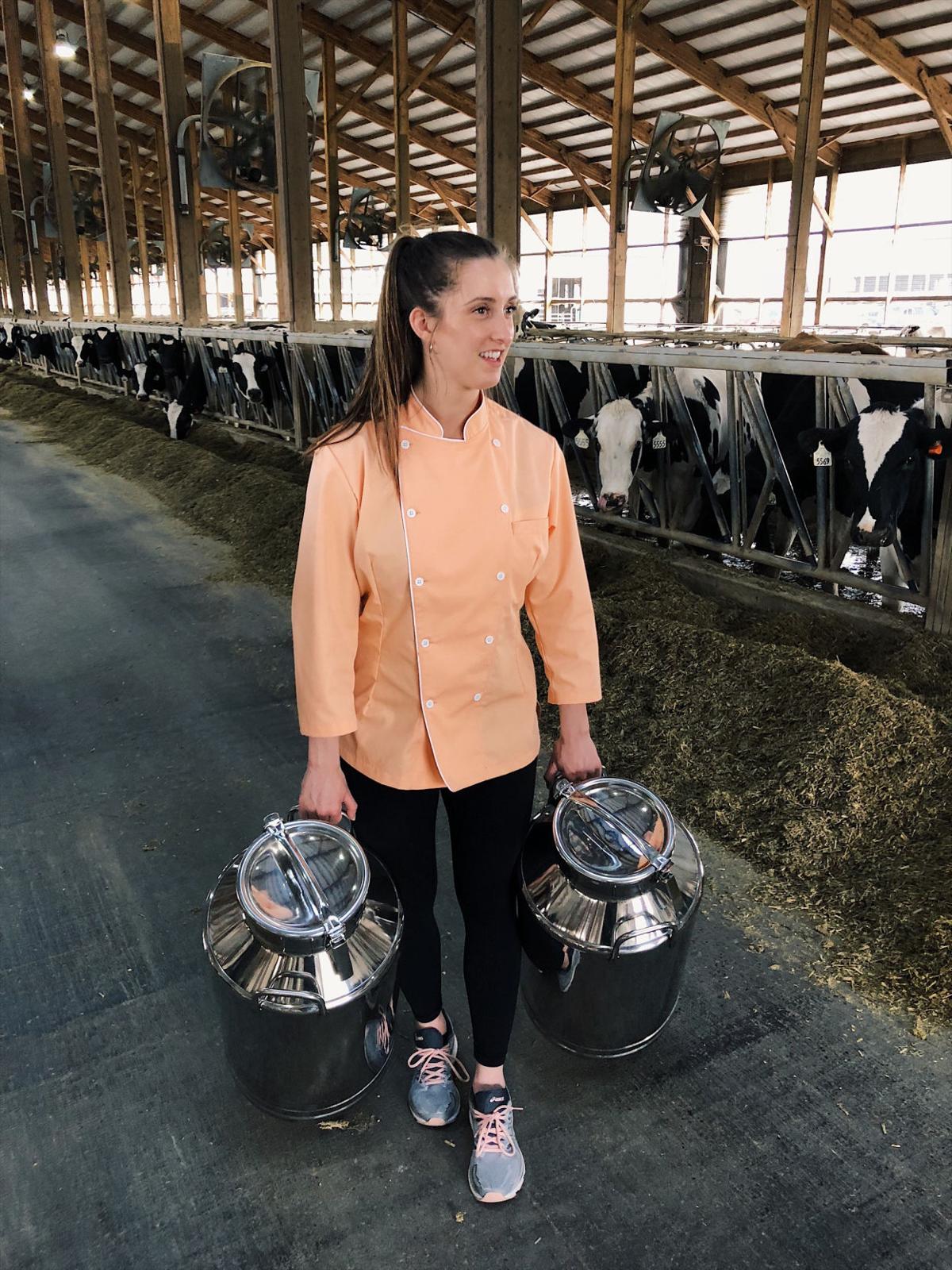 Maartje Murphy shows the barn with the milking cows at the van Bedaf dairy farm near Carrington, N.D.

Maartje Murphy shows the barn with the milking cows at the van Bedaf dairy farm near Carrington, N.D.

CARRINGTON, N.D. – Working with her siblings on her parents’ dairy farms through the years, Maartje Murphy always loved the dairy products their milking cows provided.

Maartje especially enjoyed gelato, a delicious, traditional creamy dessert made from milk and found in the Netherlands. She has fond memories of going to the shops to have gelato with her grandparents when she was young.

Today, Maartje owns and operates her own business, “Duchessa Gelato,” made fresh from milk on the family’s dairy farm near Carrington, N.D.

Her parents, Conny and Corne van Bedaf owned a dairy farm in the Netherlands, where the family, including Maartje and her two older brothers, Piet and Dries, helped milk about 50 “happy and healthy milking cows.”

The family has always had a passion for dairying, and in 2001, the van Bedafs moved to Canada, where they owned a dairy farm, milking around 120 cows.

In 2008, an opportunity arrived, and the family moved to a dairy farm near Carrington.

At the dairy farm, the family manages a team of employees that milk not 50 – but 1,500 – cows that reside in two free-stall barns. Piet and Dries are partners in the family dairy.

The van Bedafs support the community by buying barley hay/alfalfa grass from a neighbor who grows it for soil health. They mix that with North Dakota by-products, including distiller’s grains, beet pulp from the beet plant, pasta by-products from Dakota Growers Pasta Company and other supplements to feed to the milking cows.

“We work together. We’ll pump manure on our neighbors’ fields to help their soil and they will help us with feed,” Conny said.

Conny pointed out there were advantages with having a larger group of milking cows.

“As I look at it, we are kind of doing the same thing we did in the Netherlands, milking 50 cows – just bigger,” Conny said. “When you have a small family dairy, you are tied to the farm and not really able to take time off. With a bigger dairy, we are able to hire help with milking our cows and raising calves and other chores around the farm.”

Growing up, Maartje often thought about making her own gelato and imagined all the flavors she could create.

After high school, Maartje left the dairy farm to attend nursing school at the University of North Dakota in Grand Forks. She became a registered nurse and worked in Fargo.

But Maartje never forgot her dream of starting her own gelato business.

“We travel back once or twice a year to the Netherlands to see family and there are lots of gelato and ice cream shops there. I have always enjoyed the taste of gelato, and I thought it would be cool to bring gelato back to our home in North Dakota and use our own milk,” she said.

During nursing school, a team of gelato makers from Italy came over to Chicago, to teach a basic gelato making class. Maartje and Conny decided to take the class.

“We took a mother/daughter trip and we both fell in love with the gelato-making process,” Maarjie said.

Back on the dairy farm, they bought a gelato cart from Italy, complete with a canopy and a bike. It has a cooler that is operated by a battery to keep the gelato cold, and it can run on its own for up to eight hours. Later, they bought two smaller carts for events, such as graduations.

They called their gelato “Duchessa Gelato.”

“We started off catering weddings, business meetings and farmers markets and did pretty well with that,” she said, adding she wears a cute apron to match her cart when she goes to events. “Now, we have started with deliveries, so we have pint sizes. People in certain cities can order gelato over our website and I will deliver it to their towns.”

In a garage on the dairy farm, her family helped renovate the building into a place to make gelato. They added a wall to separate the space so it could be a Grade B food processing facility in the state.

Maartje explained how the gelato is made.

“We add milk, cream, and sugar to the vat and heat it to a certain temperature. The gelato mix is then cooled and aged overnight,” Maartje said. “This is how you prepare the hot processed gelato base the authentic Italian way – using farm fresh milk.”

They purchased the gelato machine and other equipment to make gelato from Italy.

For each flavor, they take a small batch of the gelato base and add whatever fruit, nuts, espresso or other flavorings needed to make the various varieties of gelato.

“I wanted to put my own twist on this tradition of gelato, so I created gelato with many flavors, with some of my favorites being pistachio, hazelnut, chocolate, espresso, salted butter caramel and strawberry cheesecake,” she said. “The flavor choices are endless – we’ve made more than 100 different flavors, and every month, we add flavors. It is honey and berry season now, so we will be making honey gelato and berry gelato.”

The gelato is hand-packaged at the farm.

“On gelato-making day, all the family pitches in to help make it,” Maartje said, adding they began selling gelato in May 2018.

They have not sold into grocery stores because the gelato is meant to be farm fresh.

“People order what flavors they want, and I make their gelato to order. Duchessa Gelato is a mobile company right now, and I take the gelato to the customers,” she said.

The community of Carrington “has been very supportive,” so demand for her gelato was there from the beginning. When she catered weddings, wedding guests told other brides about the delicious gelato – and the word spread.

With COVID-19, weddings have been postponed, but they have not cancelled their orders.

“They still want me to come next year or in the fall whenever they will have their weddings. We try to stay positive, and we are still making deliveries in a safe manner,” Maartje said.

In the near future, her business will not just be mobile.

Maartje and her husband, Casey, have recently purchased their own dairy farm near Carrington, close to her parents’ dairy farm.

“It used to be a dairy farm, so there is a beautiful old dairy barn on the farm. There is a lot of history there,” she said.

The farm has several buildings, including an old farmhouse, a Quonset and a long pole barn, which will be the creamery.

“We will be renovating the pole barn into a Grade A creamery on the site to make dairy products,” she said.

Conny said since it will be a Grade A creamery, they will be able to make any dairy product they want – and they have lots of ideas for cheese, yummy yogurt, all kinds of gelato and other products.

“Since we will be using the milk from my parents’ dairy cows, we know the dairy products will be high quality and delicious,” Maartje said.

One product they want to make is Gouda cheese, which is common in the Netherlands.

Once the creamery is built, Maartje hopes it will become an agri-tourism dairy farm.

“My dream in the future is for people to come to the farm, buy dairy products at the creamery, see where their food comes from, tour the farm and experience what real farm life is like in North Dakota,” she said.