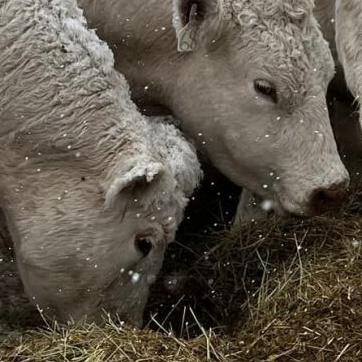 On their operation right now, Joy Soreide Kinsey said they are busy trimming bulls in preparation for their bull sale in January, which will be held at the ranch on Jan. 27 at 1 p.m. 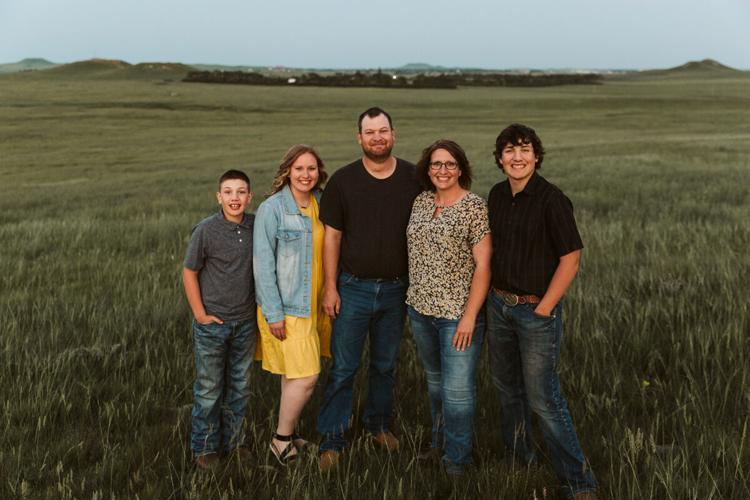 At the Soreide Charolais Ranch, Zach and Joy Kinsey with their kids, Johnny, Kaylee, and Casey. 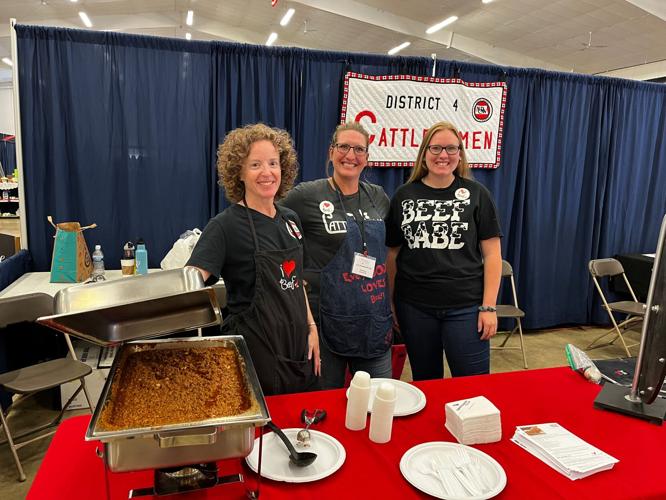 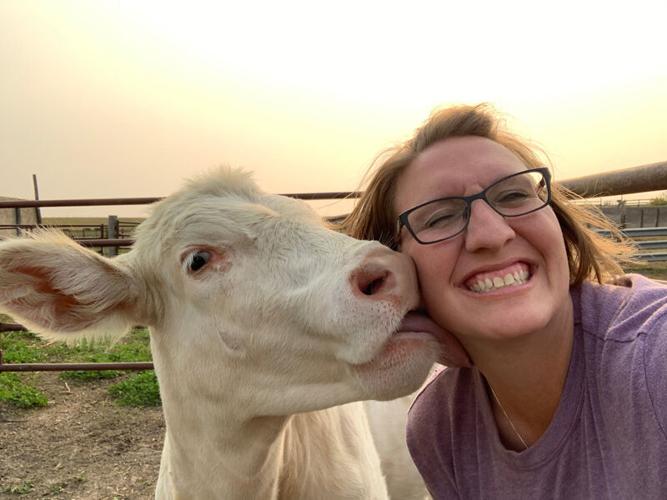 Joy Soreide Kinsey and a new calf on their ranch. 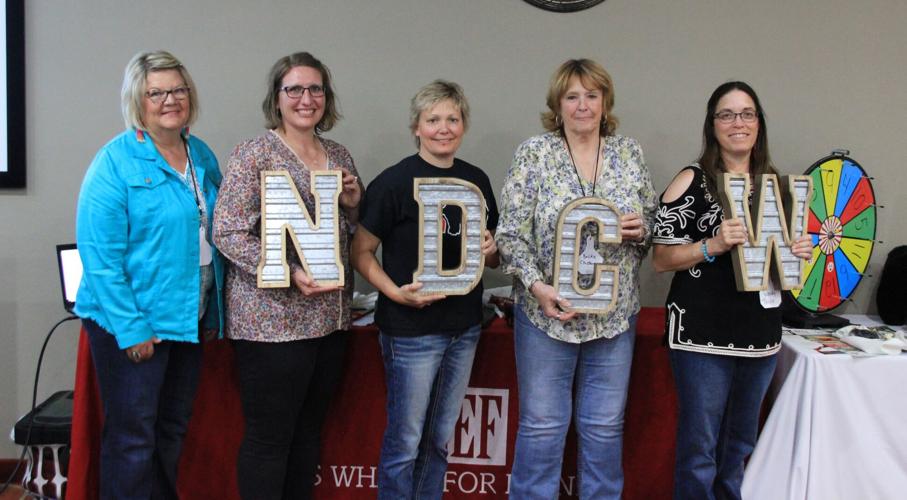 BOWMAN, N.D. – The North Dakota CattleWomen (NDCW) organization has been a family affair for Joy Soreide Kinsey, who has been a member of the organization for 16 years and currently serves as president.

The women in her family have been NDCW members nearly since the organization’s beginnings in the state.

“The North Dakota CattleWomen started in 1951 and my grandma, Dorothy, joined shortly after that. She was a state president in the 1990s, and my mom, Lynn, was a member for 30 plus years, so it’s kind of a family legacy,” Joy said.

Lynn was active in the NDCW on the district level and was a member until she passed away.

Joy’s daughter, Kaylee, who is 18 years old and a senior in high school, has been a junior member of the NDCW for 12 years – and now she is a full member.

“Because she is 18, this is Kaylee’s first year of being a full-fledged NDCW member,” Joy said. Joy also has two sons, Casey and Johnny.

She and her husband, Zach, work alongside her dad, Jay, and his wife, Susan, on the Soreide Charolais Ranch near Bowman.

“We raise purebred Charolais cattle and sell yearling Charolais bulls in our annual production sale in January at the ranch west of Bowman,” she said.

On their operation right now, Joy said they are busy trimming bulls in preparation for their bull sale in January, which will be held at the ranch on Jan. 27 at 1 p.m.

“I took pictures for our catalog and for advertising. We are also feeding cattle, and we custom feed, as well,” Joy said.

Kaylee and Casey also own a small herd of commercial Red Angus, and they breed the heifers/cows to Charolais bulls.

“The combination of Red Angus/Charolais produces what are known as ‘buckskin’ calves,” Joy said.

Joy’s kids have been in 4-H and FFA all their lives, and Joy is a 4-H leader.

“Kaylee is at the end of her FFA career and went to nationals,” Joy said. Kaylee was part of the Bowman livestock judging team that won first at the state FFA competition in March. The team earned a gold award at the National FFA Convention in Indianapolis, Ind.

Casey is a freshman in high school and is starting in FFA at Bowman High School, as well.

The NDCW organization has always been and continues to be about promoting beef.

“This is just kind of what we do. We promote beef and promote a positive image of our industry,” she said.

As an active member of the NDCW, Joy has served on the executive board for 10 years. In addition, she has served as state secretary, state vice president, and now president. She has also served as president of District 4 (the southwest corner of the state), which has a lot of cattle operations, and she is currently District 4’s beef education and promotion chair.

In 1951, when the NDCW started, they were known as the North Dakota Cow Belles. The name was changed from the CowBelles to CattleWomen in 1987 to be more professional.

The NDCW holds monthly meetings on video chat, and each district in the state meets 2-3 times a year. The five active districts in the state hold their own promotion and education events.

At the Medora event, the District 4 NDCW booth played beef trivia and handed out beef samples to those who stopped by.

“That is kind of our biggest event of the year. We have a booth and we serve beef samples and have beef trivia and provide good beef information,” she said.

Joy said an example of beef trivia they often ask is, “What’s the most popular cut of beef?”

Visitors might guess a nice ribeye steak or a brisket, but the answer is actually a trick questions.

“It is hamburger,” Joy said.

Another example includes: “What are the top three nutrients in beef that start with the acronym ‘ZIP?’”

“The answer is zinc, iron, and protein,” she said. “Those are the top three, which provide muscle growth, brain development, and power.”

Joy said she has had people tell her that they are vegan, and that usually starts a conversation about beef.

“I will tell them, ‘Okay, that’s fine. That’s your choice, but what are you going to do when you are 80? How are you going to supplement your body, because I have never seen an 80-year-old vegan,” she said. “There are so many nutrients that beef provides that are difficult, and maybe, impossible to replace.”

When Joy was young, she remembers going to cattle events with her grandma and mom.

“I remember going places with Grandma, and when I was a kid, if I wanted to go to my aunt’s home, we planned it around the NDCW Convention. Then Grandma could take me home when she was going to the convention,” she said.

Joy said the NDCW has always been a part of her life.

“Putting on events, going to events – I remember my first event that I did myself for the NDCW. My mom was able to be there to help me out with that and it was so special,” she said. Her mom was always so encouraging of her, which meant a lot to Joy. “My mom would just tell me to promote beef and be open and ready to answer any questions.”

Her dad, too, was always “huge in the promotion of beef.”

“I remember as a kid, if we went to McDonald’s, we couldn’t have chicken nuggets because we are beef producers,” Joy said, with a laugh. “Looking back, I was much better off than the other kids who weren’t eating beef.”

At home, they would enjoy beef roasts and hamburger casseroles, so Joy has always grown up around beef.

“Mom and Dad passed down their passion for the beef industry. I’ve always been passionate about beef and it’s nice. Around here in Bowman, I’m kind of known as the beef lady because if someone has a beef question, they will say, ‘Just ask Joy, she’ll know,’” she said.

Last year, the Bowman fifth-grade teacher was doing a lesson on paragraphs, and she asked Joy if she had a giant hamburger that she could use as a teaching tool.

The NDCW has a giant hamburger that is probably a foot in diameter.

“You can take it apart – it’s like a pillow. Gladys Woroniecki of Hebron made it. It has the bun, the burger, cheese, lettuce, tomatoes, onions, mustard and ketchup,” she said.

Joy uses the hamburger when she goes into schools to talk to kids about beef.

“I tell the kids the hamburger is a whole meal in itself. The burger is there and that’s the most important part. That’s your protein, but then here you have tomatoes, which give you vitamin C, and cheese, which gives you calcium,” she said.

In order to promote beef in the best way, Joy said it is important to “get out there.”

“One year, I went to Dickinson and I hit all the fourth-grade classes in the city, so I reached around 250 kids,” she said. “The schools are where we need to be because there are a lot of kids who don’t have an agricultural background. I think I only had a couple of kids that actually lived on a ranch.”

Joy pointed out that while some may think of Dickinson as rural, most kids, in general, are five generations removed from the family farm.

“That is why we need to get the correct information out, because social media is going to tell them whatever they want them to know,” Joy said.

Across the state, Joy said the NDCW not only goes into the schools personally, but they donate agricultural books to schools, as well as libraries.

“Hopefully, kids will check them out and be able to get the message that way, too,” she said.

The NDCW covers the entire state with women on the board who are living on ranches and areas in all parts of the state.

The goal, as it always has been, is to maintain and increase the demand for beef and to talk to people about eating beef and the benefits of beef. In addition, Joy said NDCW members also talk about ranching practices and “how we’re stewards of the land.”

“There is so much misinformation out there. If you can give people a positive place to ask the questions, that is the biggest thing,” she said. “The ag community needs to be open to answering those questions and be proactive about it.”

The NDCW has a Facebook page to put out positive information, and this year, the organization began online membership for the first time.

“That has been amazing because we had been doing just a paper brochure membership form, and this year we started online membership via the website. We had a great reaction and we have added new members from doing that,” Joy said.

The NDCW helps out the North Dakota State University Collegiate CattleWomen, as well.

“They do their own activities, and we help them to do the reports because we do utilize checkoff dollars,” she said, adding they will reimburse them for their activities. “We sponsored a couple of them to attend the North Dakota Stockmen’s Association Top Hands Leadership Summit this fall.”

NDCW members are looking forward to a virtual beef run this spring that will be held online. People can sign up to run or walk a 5K and donate to the fundraiser. Participants will receive a t-shirt and a beef stick.

They will also be hosting the national meeting next summer in Watford City, N.D. The national organization is known as the American National CattleWomen.

Region 3 and Region 7 (North Dakota’s region) will host the meetings and educational workshops.

“It is so exciting to have other cattle women from other states come, especially into Watford City into the Badlands to see the beauty of western North Dakota,” Joy said.

After ‘surprisingly strong’ 2022, challenges for ag continue in 2023

The agricultural economy in the Ninth District of the Minneapolis Federal Reserve was in reasonably good shape coming into the new year. While…

On their operation right now, Joy Soreide Kinsey said they are busy trimming bulls in preparation for their bull sale in January, which will be held at the ranch on Jan. 27 at 1 p.m.

At the Soreide Charolais Ranch, Zach and Joy Kinsey with their kids, Johnny, Kaylee, and Casey.

Joy Soreide Kinsey and a new calf on their ranch.