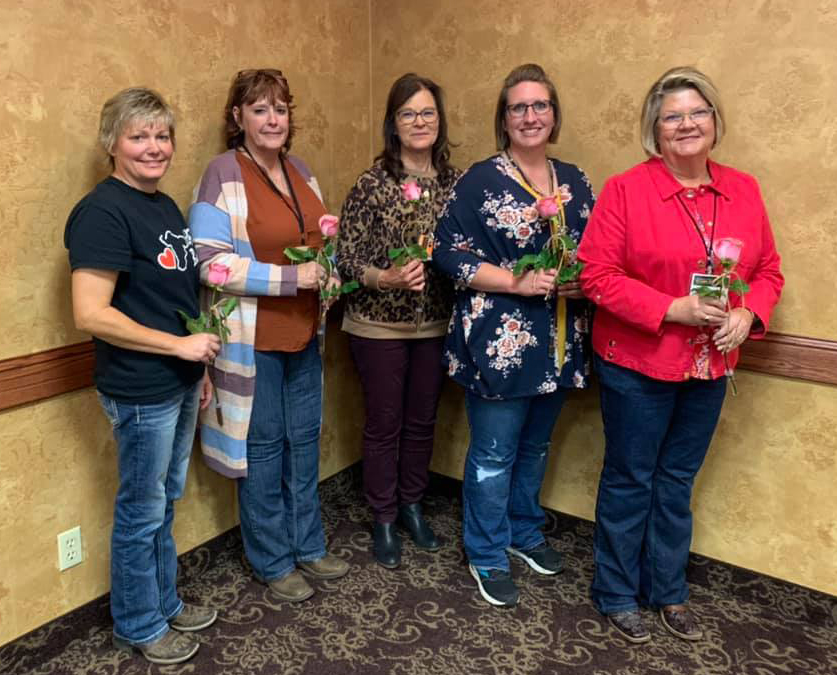 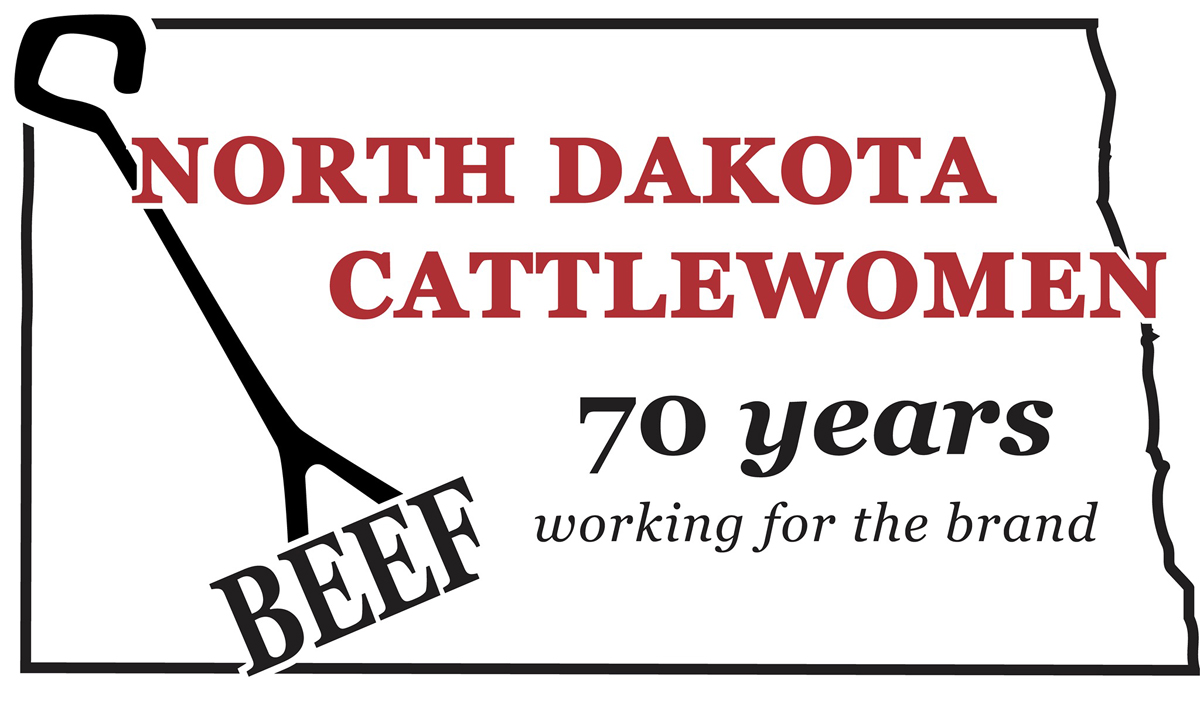 The North Dakota CattleWomen built this logo to go with their upcoming meeting and convention.

The North Dakota CattleWomen (NDCW) are planning a special convention in 2021 for their 70th anniversary. The organization’s state meeting will be held June 11-12 in Mandan at the Comfort Inn and Suites.

“We are celebrating 70 years of our organization forming as a group and supporting the beef industry in North Dakota in many ways throughout the years, and we are planning to have some special speakers and events at the meeting,” said Kathy Tokach, immediate past president of the NDCW and one of the organizers of the annual meeting. Tokach is a seedstock and cow/calf operator with her husband, Richard, at Tokach Angus Ranch near St. Anthony.

The NDCW had to cancel last year’s state meeting due to COVID precautions, so this year’s meeting will be especially meaningful.

There was a special logo designed to celebrate the 70th anniversary.

“Our message for the 70th anniversary meeting is ‘celebrating 70 years working for the brand,’ and we had a logo made to honor that,” Tokach said.

NDCW also created a 70th anniversary book about the organization, its women members, and the activities they participate in.

“Members sent in small biographies and all the districts sent in photos of some of the activities and events they have held,” she said.

There are nine districts that make up the NDCW.

For example, one district packaged ground beef to present to food pantries, and others supported beef education in a myriad of ways.

One district has a Kindergarten Day in Watford City each year, except for last year during COVID. It is usually held out on the grounds of the school, where booths and fun events are held. Some of the fun events include coloring, playing games, and wagon rides where horses pull around wagons filled with kids enjoying the day.

“They bring all the kids in the school, the teachers, and the chaperones to the event, and have booths from different organizations. Each booth teaches about beef in its own way. For example, the Soil Conservation District talks about the importance of cattle on the soil,” Tokach said. “Other booths talk about beef nutrition, and they really tell the story of beef for kids. We always try to stress the nutritional aspect of beef to kids. It is always a fun event.”

During the Morton County Farm Bureau’s Ag Day celebration, the NDCW’s District 5 had a spin-the-wheel booth. The county put up tents and all kinds of activities were held.

“We had a spin-the-wheel and put beef byproducts on the wheel,” Tokach said. “A beef animal is so much more than just food. You need it to make a marshmallow, to make leather, to make rawhide. There are all kinds of beef byproducts.”

During the 70th annual meeting, the NDCW will honor those members who have dedicated 40 years or more to the organization.

“We are going to have a ceremony honoring those individuals who have been with us for 40 years or more, and we are also going to honor all NDCW members because you need everyone to make an organization work,” she said. “It is not one person that makes NDCW the organization it is – it is around 180-200 people working together that makes it what it is.”

Not everyone involved with the organization is an active member. Some are supportive members and do what they can to help NDCW.

President Patten encourages all NDCW members and past members to attend the convention.

“District 5 has put in a lot of planning, with a strong focus on speakers and programs that will entertain, educate, and support members in attendance at the meeting,” Patten said.

The following is planned at the annual meeting for Friday and Saturday, June 11-12:

Registration will be held on Friday beginning at 9 a.m.

Julie Garden-Robinson, NDSU Extension food and nutrition specialist, will speak on “Crockpot to Instapot,” with a drawing for an Instapot at the session. All the women want to learn the secrets of using this new form of cooking.

“With the 70th anniversary, we used to be the Cow Belles and we all used the crockpot, and still do, but the Instapot is what is new today,” Tokach said.

Nancy Jo Bateman, executive director of the North Dakota Beef Commission, will talk about the NDCW during the luncheon.

In addition, the luncheon will feature Maartje Murphy of Duchessa Gelato in Carrington, as well as Monica Hannan, the managing editor of NBC North Dakota News in Bismarck.

“Maartje Murphy received the honor of being on the Forbes 30 under 30 list and will be one of our speakers,” she said. “Monica Hannan will give us an inspirational/motivational speech.”

On Friday evening, NDCW will hold a “Steak and Wine/Beer Pairing Supper.”

For example, they found with a stir-fry, a sweet white wine works best, and with a grilled steak, a full red wine works the best.

“So on Friday night, we are going to have the pairing with a grilled steak dinner. We normally would not have a steak dinner, but this is special for our 70th anniversary,” Tokach said.

Entertainment in the evening will include a “Style Show,” featuring styles through the decades.

A sing-along event will also be part of the Friday evening festivities. Cassidy Strommen will lead this, along with all the members.

Also on Friday, NDCW members with “hidden musical talents” will be part of the entertainment.

The NDCW will feature a speaker, Cali Thorne, talking about “Communicating with Consumers,” at 9 a.m.

“Cali Thorne will do some training with us on communicating with our consumers,” she said.

At 10:30 a.m., the NDCW will honor those members who have 40 years or more with the organization.

Steve Tomac, farmer/rancher of St. Anthony, as well as former rodeo clown and state legislator, will be the Master of Ceremonies.

During the 2021 state meeting, there will also be the election of officers.

The NDCW have a long and respected history in North Dakota, which has been chronicled by Shelia Robinson, covering the years 1951-1980.

The organization was originally called the North Dakota Cow Belles. The Cow Belles were organized in 1951, about the same time as the American National Cow Belles was being organized.

A group of women met in Fargo on June 8, 1951, and voted to organize. Mrs. John Hanson of Bowman was elected the first president. Later that year at a meeting in Dickinson, committees were appointed.

During the term of North Dakota Cow Belles president Mrs. Earl Morrell, the organization’s efforts to promote beef increased. Beef bacon and beef links were produced nationally and promoted in the state. There were bumper stickers and letter stickers made and passed out. Some other useful items for the Cow Belles were a booklet of cartoons and beef facts called, “Who’s Beefing,” cards on “Beef is Good Medicine,” which talked about byproducts, and a billfold calendars in pink with the saying, “Some like it pink; some like it well; anyway you serve it, beef is simply swell.”

The first North Dakota Cow Belles booth was at the North Dakota Winter Show, when the facilities were in downtown Valley City. They served hot beef broth.

They made bandanas in order to copyright the name Cow Belles, with a white rayon scarf with a black cow belle, and brand was sold in Dickinson at the convention there in 1954.

In 1955, Britton Jewelry in Dickinson designed and sold a silver bar with a hanging bell, which could be engraved with a ranch brand on it.

Over the years, the organization developed its beef promotion efforts, such as “Beef for Father’s Day,” which was a big success.

In January 1987, at the national convention, by majority vote, the name of the national organization was changed to American National CattleWomen.

In June 1987, the state organization voted to follow their leadership and became the North Dakota CattleWomen.

In the present day, there are new technologies at NDCW that make it possible for more women living on ranches or running busy lives elsewhere to participate in NDCW meetings.

Tokach said as women, they have found it difficult to attend meetings when they work on the ranch, off the ranch, take care of kids, their homes and participate in their kids’ activities.

As an organization, NDCW has switched to holding meetings online for the last year and a half. They found that by doing phone conferencing for meetings that more women could participate and be active members.

“We have been utilizing Uber (UberConference) meetings and you can use a landline with it. As NDCW, we are spread out from the southeast corner to the northwest corner of the state and we can’t expect people to drive that far for a meeting. For us to get together monthly or quarterly is difficult, but this technology has been working for us,” she said. “Cattle women are creative, and this Uber conference has helped us continue to succeed as an organization.”

Tokash is able to spend more time with NDCW now.

“We all lead busy lives. I was involved in my kids’ 4-H and FFA when I was younger, and that was my priority then. But now I have more time to devote to NDCW and I have been active for about 15 years,” Tokach said.

According to Tokach, using the new technology has kept more women active than ever before in the NDCW.

“We need to make organizations life-friendly,” she added.

MINOT, N.D. – The 2021 North Dakota State Fair will showcase some of the state’s best livestock with a stacked lineup of events. The fair’s li…

A new tool is helping producers, crop consultants, and others find out what the real moisture level in the soil is.

Saying goodbye to our dear friend and colleague, Dale Hildebrant

It is with a heavy heart that we say goodbye to our dear friend and colleague, Dale Hildebrant, who passed away on Monday, June 14, 2021, at M…

The North Dakota CattleWomen built this logo to go with their upcoming meeting and convention.