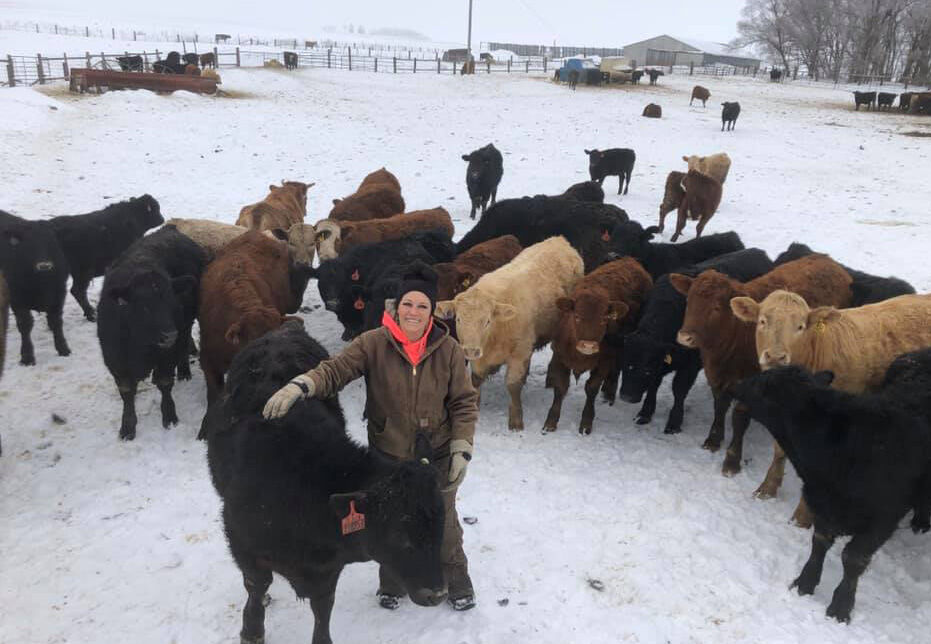 Lacey Block on her ranch near Havana with some of her cattle in the winter. 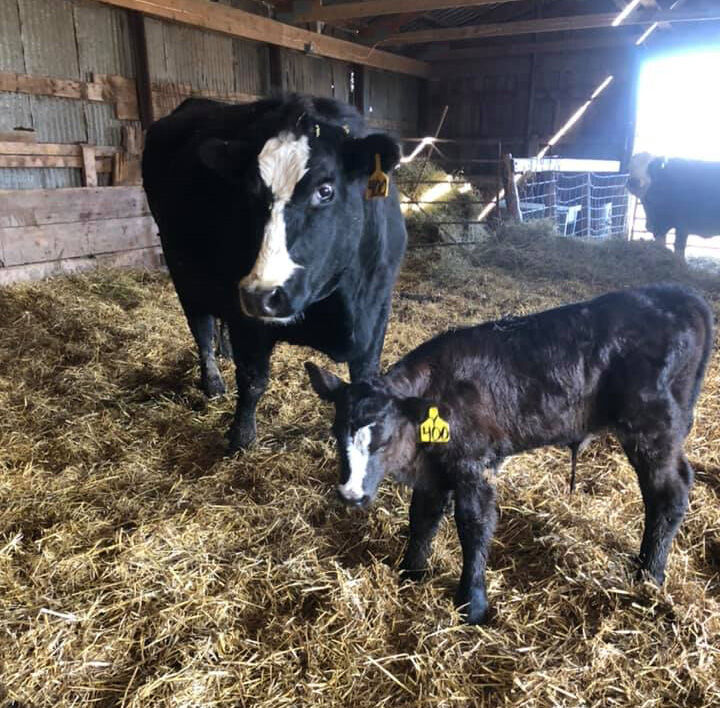 Here is a mother cow with her calf on Lacey and Drew’s ranch near Havana. 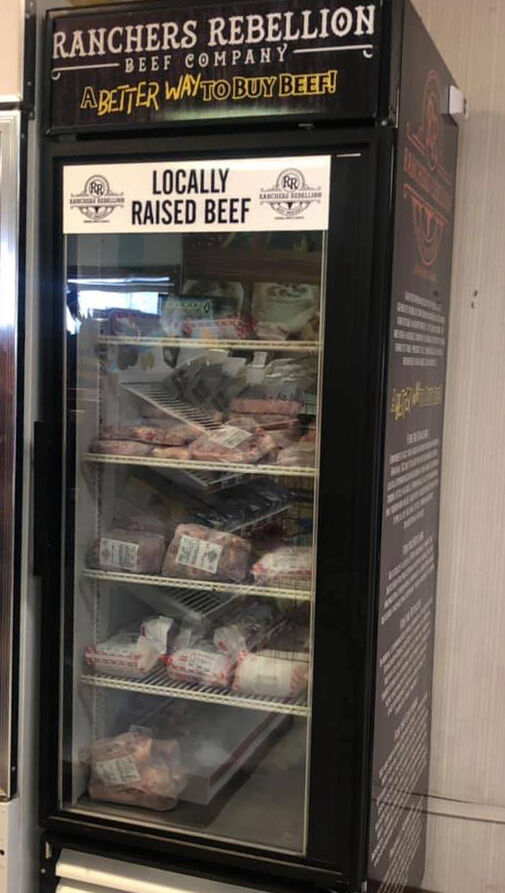 Rancher’s Rebellion Beef Company beef can be purchased at Kwik Stop in Forman and at One Stop in Gwinner, N.D., and some SD locations, as well. She stops in Fargo once a week.

Lacey Block on her ranch near Havana with some of her cattle in the winter.

Here is a mother cow with her calf on Lacey and Drew’s ranch near Havana.

Rancher’s Rebellion Beef Company beef can be purchased at Kwik Stop in Forman and at One Stop in Gwinner, N.D., and some SD locations, as well. She stops in Fargo once a week.

HAVANA, N.D. – Sixth-generation farmer/rancher Lacey Block was not just concerned with making money for her own family and her family’s ranch when she started Rancher’s Rebellion Beef Company, LLC.

Block was also concerned about the ranching industry and the fact that family ranchers were barely keeping afloat.

“For me, it isn’t about my own success. It is about the success of our beef industry. We just want to own our own markets and function as independent beef producers,” Block said.

“Everybody stops to get gas, so I thought, ‘Why not sell there?’” she said. It gives her family a bigger cut of the profits selling this way and brings more people into their small stores, supporting the communities.

“I don’t just use my own beef. I pay a premium to my neighbors for their quality beef. I pay a local butcher. I bring a bigger footprint into these smaller convenience stores and we need to keep money in our local communities,” she said.

Block grew up on her parents’ ranch near Lake City, S.D.

“We were traditional cow/calf operators, working our cattle with horses,” she said, adding she knew it was in her blood to run her own ranch someday. “I had a passion for the industry and I knew I would end up ranching one way or another.”

Block first trained as a licensed practical nurse, knowing she needed the money to help support her family.

But nursing became difficult when she had to leave her two kids, Dane and Reece, with a sitter while she worked a shift or two. At the time, Dane was in first grade, and her baby, Reece, was just a few months old.

Block’s goal was to have a career in ranching that she could share with her kids – more of a family affair.

“In my mid-20s, I moved home to my family’s ranch and began selling commercial breeding stock meat goats to 4-H and stock growers,” she said. The kids enjoyed being on the ranch, doing things like working with the bottle calves. The bottle calves made her want to work more with cattle, so she did.

A few years ago, it seemed luck crossed her path, because she met and started dating Drew Smith, who just so happened to own a farm/ranch near Havana, in southeastern North Dakota.

“Drew is also a sixth-generation producer. We just clicked and for the last three years, and we have been running the cow/calf operation together,” she said.

They run 140 cow/calf pairs, keeping some replacement heifers for their cowherd. Before Rancher’s Rebellion Beef Co., they raised their steers to 600-900 pounds and sold them in January.

In addition, they raise corn and soybeans for cash crops. In previous years, they raised wheat, but in 2020, inputs were too high and prices were too low to seed wheat.

On the ranch, Block always keeps back a few “reject calves.” Some steers have a few cosmetic defects and are not as uniform as other steers, so they don’t sell for much at the sales barn.

But Block always made sure the meat was top quality, finishing the steers with corn. Her family gained some freezer beef, while the extra was sold to a few neighbors and friends.

As it turned out, the neighbors and friends liked the beef so much they wanted more.

“Those who bought the beef were telling us, ‘You guys do such a good job. This is really great,’ and the word got out and the demand for our beef just grew and grew,” she said.

About a year ago, Block wondered if there was a way for her to sell more volume and make more money than if she just sold her steers to the auction barn.

That would mean starting a small business and all the regulations and paperwork that went with it.

But Block was young (32) and had a passion for the beef industry. She was up to the challenge.

Step-by-step, she read and filled out the required paperwork, a long and grueling process.

Block studied USDA and state inspection requirements, State Health Department requirements, permits, and filled out every paper that was required. It took a few months.

Some days, when Block had so much paperwork piled on her and had such a hard time finding the right information to fill it out, she thought about giving up.

Then she poured another cup of coffee and got back to work.

“There just isn’t enough producer-friendly information out there on how to start your own beef business,” she said. “So many producers would like to do it, but they aren’t going to read 90-some pages on a USDA website.”

Block decided to write down and record everything that she was doing on her way to owning a small business, to help other producers do the same.

“Now I help other producers who want to sell beef under our label, or who want to do it on their own. I talk to other ranchers all the time, and have given talks on how to open a beef business,” Block said. “I want to help keep family ranchers on the farm.”

In November 2019, Block started the work to open Rancher’s Rebellion, and by February of 2020, she was ready to open.

A friend thought up the unusual name of “Rancher’s Rebellion.”

“It wasn’t really a revolution that I was doing, it was more of a rebellion against the typical way beef is sold. We don’t have a lot of cows, but we can do it together as a community,” she said.

Coincidentally, that was just around the time COVID-19 was hitting. By March, food shortages were prominent, and there was even greater demand for her beef.

To remedy that, Block started selling her product into gas stations and convenience stores. She set up narrow coolers that didn’t take up too much space and was able to sell all her beef items in it.

“I sell into places that wouldn’t normally sell beef and that has worked out really, really well,” she said.

Block does all the hauling herself – from the butcher to the coolers, and back again.

More importantly, it is a family occupation. Block hopes her sons will continue doing it after she and Drew retire – but that is a long way off.

While her beef business has increased with COVID-19, she has not changed her prices.

“As long as my inputs don’t change, there is no reason for me to raise my prices. People were surprised by that,” she said.

Block has 10 locations and also distributes beef to certain cities, including Fargo, N.D., meeting people at locations with beef in the back of her pickup – kept ice cold of course.

Certain events, such as Wahpeton’s Farmer’s Market, has sold her beef, as well.

“All the beef is dry aged for 14 days for flavor,” she said.

Rancher’s Rebellion Beef Company beef can be purchased at Kwik Stop in Forman and at One Stop in Gwinner, N.D. She stops in Fargo once a week.

In South Dakota, it can be purchased at Cliff’s One Stop in Britton; Buck’s in Peever, and other places.

One of the new places Block is selling into is Sioux Valley Co-op, in Watertown, S.D., an oil/gas and convenience store farm co-op.