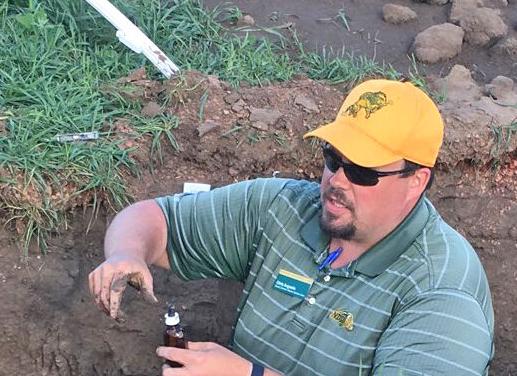 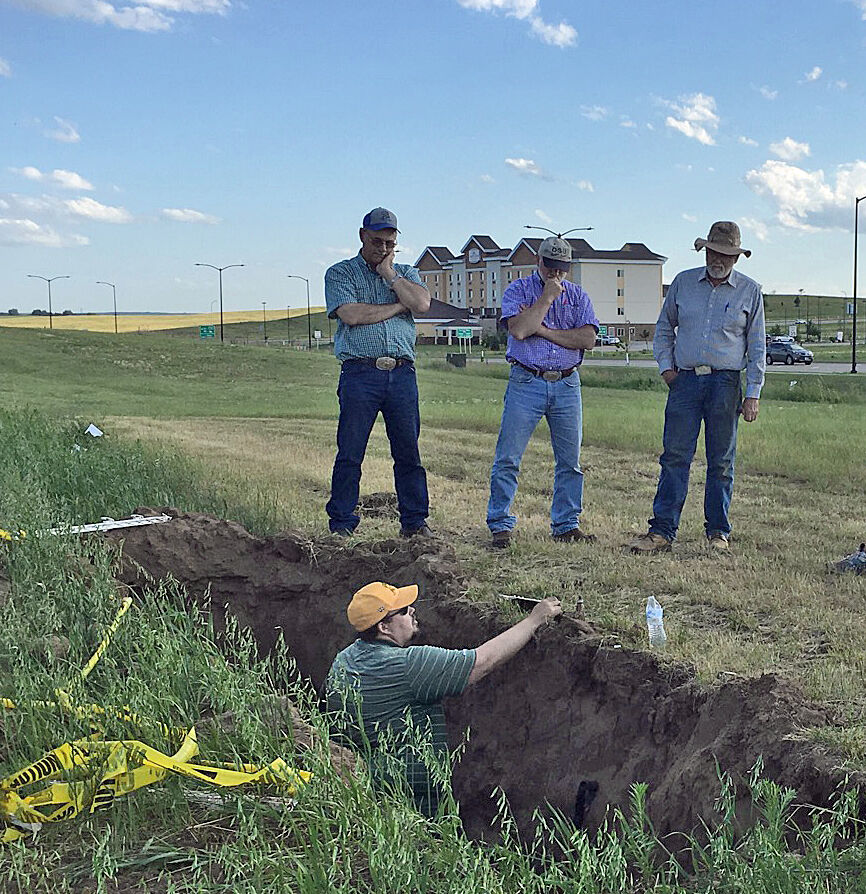 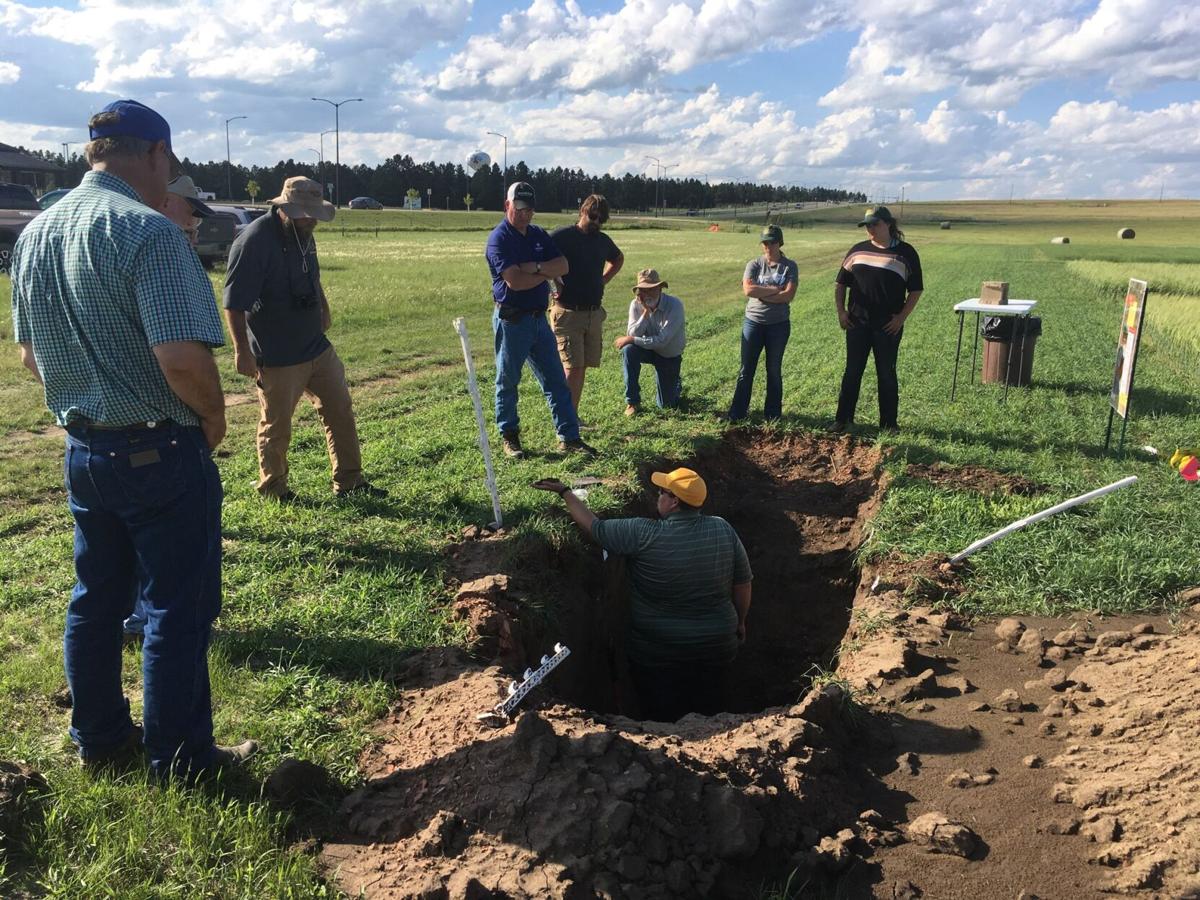 Everyone spread out to follow safe health advisories during DREC's field day in July.

Everyone spread out to follow safe health advisories during DREC's field day in July.

DICKINSON, N.D. – What would producers gain by visually examining the living soil that lies underneath their crops and grasslands?

There could be problems with soil structure like erosion or root structures that grow horizontally rather than vertically due to compaction.

Chris Augustin, director of NDSU Dickinson Research Extension Center (DREC) and a soil scientist, believes in digging soil pits and letting producers see for themselves what is happening with their soil.

“We need to stay on top of soil health management. It has taken thousands of years for our soil to form, and it is going to take years to improve it,” Augustin told producers gathered for the COVID-19 shortened field day. “It won't ever be back completely to the way it was when it was native grass. But with livestock integration, diverse rotation, no-tilling and following other soil health management, we can mimic nature and get close to what it was.”

Augustin and Ryan Buetow, NDSU cropping specialist, dug two soil pits with a backhoe, each about 6-foot deep, one downhill and one uphill.

“We dug the pits at a different point on the landscape to show how quickly soils can change. The bottom pit had almost 2 feet of topsoil, and the hilltop had about 6 inches of topsoil,” Augustin said.

In the lower pit, the DREC crews planted various crops to show the differences of root architectures. However, with it being so dry, hardly anything grew there.

The upper soil pit was in a hayland mix (grass and alfalfa).

Augustin showed the horizons below the surface, underneath the crops and hay.

“There are five soil forming factors help understand soil and its management. The factors include: climate, living organisms, relief or topography, parent material (a mineral source material) and time,” he said.

With parent material, if producers live north and east of the Missouri river, their soils have some glacial-till or lakebed sediments. The till is from glaciers grinding up rocks and randomly depositing them across the landscape.

“Out in Dickinson, we are part of the Sentinel Butte formation, and the parent material is based on old swamps, rivers and lakes,” he said. “Dinosaurs walked here 70 million years ago.”

There were land dinosaurs out in the western regions of the state (south and west of the Missouri River), but in the eastern region of the state, there were aquatic reptiles, such as mosasaurs, from 75 million years ago. Mosasaur bones were found in the Pembina Escarpment, the ridge that separates the Red River Valley from the Prairie Pothole Region.

The soil in the Dickinson region is formed from residuum parent material, and the area holds an older topography than areas farther north and east.

“Some glaciers did come this way, but a good part of this area did not see glaciers during the last 2.5 million years,” he said. “That is why the Badlands look like they do, with hills and bluffs from water erosion.”

Before the glaciers came, North Dakota drained to the north and east. The glaciers changed the way rivers and lakes move. In fact, there is a part of Sakakawea was formed by an ice dam, located close to where the Garrison Dam is today.

“With the ice dam holding back the melted water, there was a huge amount of water that was cut out the Missouri River Basin,” he said.

North and east of the Missouri River lies the Prairie Pothole Region of the state.

“We don't have good drainage channels out there because in geological time, it is still a young topography,” Augustin said.

“With it, we know prairie soils are the most productive in the world in terms of crop production,” Augustin said.

The vegetation was from prairie grasses, which put a lot of organic matter into the soils. That helped soften the soils up and added lots of fertility.

“With no-tilling, our soils are improving. They aren’t as good as 100 years ago, but they are certainly better than they were 40 years ago when we were tilling,” he said.

No-tilling helps the soil in more ways than one, especially in the loss of soil from wind and water erosion.

NDSU has given recommendations for fertilizer with no-tilling.

“If you have been no-tilling for six or more years, we recommend a 50-pound nitrogen credit per acre,” Augustin said. “You can cut back on your N fertilizer, and that can be $25 an acre in savings.”

“Phosphorus – we have a good understanding of it, but there is a lot more we need to understand about how to manage it,” he said, explaining phosphorus has a tendency to tie-up in the soil and is directly related to soil pH.

Ideally, soil pH should be close to 7.

“While liming can be added to acidic soils, and help with aluminum tie-up, when pH is too low, it isn't cost-effective to try to lower soil pH to help alleviate calcium tie-up,” he said.

Producers need to manage their phosphorus in those cases, and may need to increase the amount of phosphorus per acre.

In the southwestern region of the state, producers may be seeing low pH (less than 5.5) in the top 2-3 inches of soil.

“When you get into your subsoil, we do have lime in most of our soils. However, it is below where the soil acidity is located, and we don't want to till and interfere with our no-till soil health benefits,” Augustin said.

In the soil pits, Augustin talked about how cover crops might be used to help soil compaction.

“Cover crops have gotten popular, and one of the things touted about them is reducing compaction,” he said.

When Augustin was a soil health specialist at Minot's North Central Research Extension Center, he conducted trials on the effects of late-season cover crops on soil compaction.

For treatments, Augustin planted radishes, giving them a short time to grow and be ready, the time it would take for a producer to grow cover crops after harvest for late fall and winter grazing.

Augustin used tillage radishes, such as Jackhammer Radishes. There were four replications of each.

Soil compaction was recorded with a penetrometer, which records soil resistance pounds per square inch (PSI) and soil depth.

“I saw reductions in soil compaction using the radish mix to a depth of 6 inches,” he said.

“I also grew a diverse cover crop mix, but I did not see the reduction in soil compaction as deep in the soil as a radish mix,” he said.

Biodiversity can be a great thing, such as a diverse cover crop mix, but it depends on what a producer is looking to do with cover crops. If a producer is simply trying to reduce soil compaction, a single mix with radishes could be a better choice.

Augustin summed up with structuring the layers in the soil as the “Hidden Horizons.”

In descending order, those horizons include: organic layer, mineral layer, a layer of loss by water carrying out, a layer of gain as minerals and OM wash in, and the parent material, which is mostly unaffected by activity in the other layers.