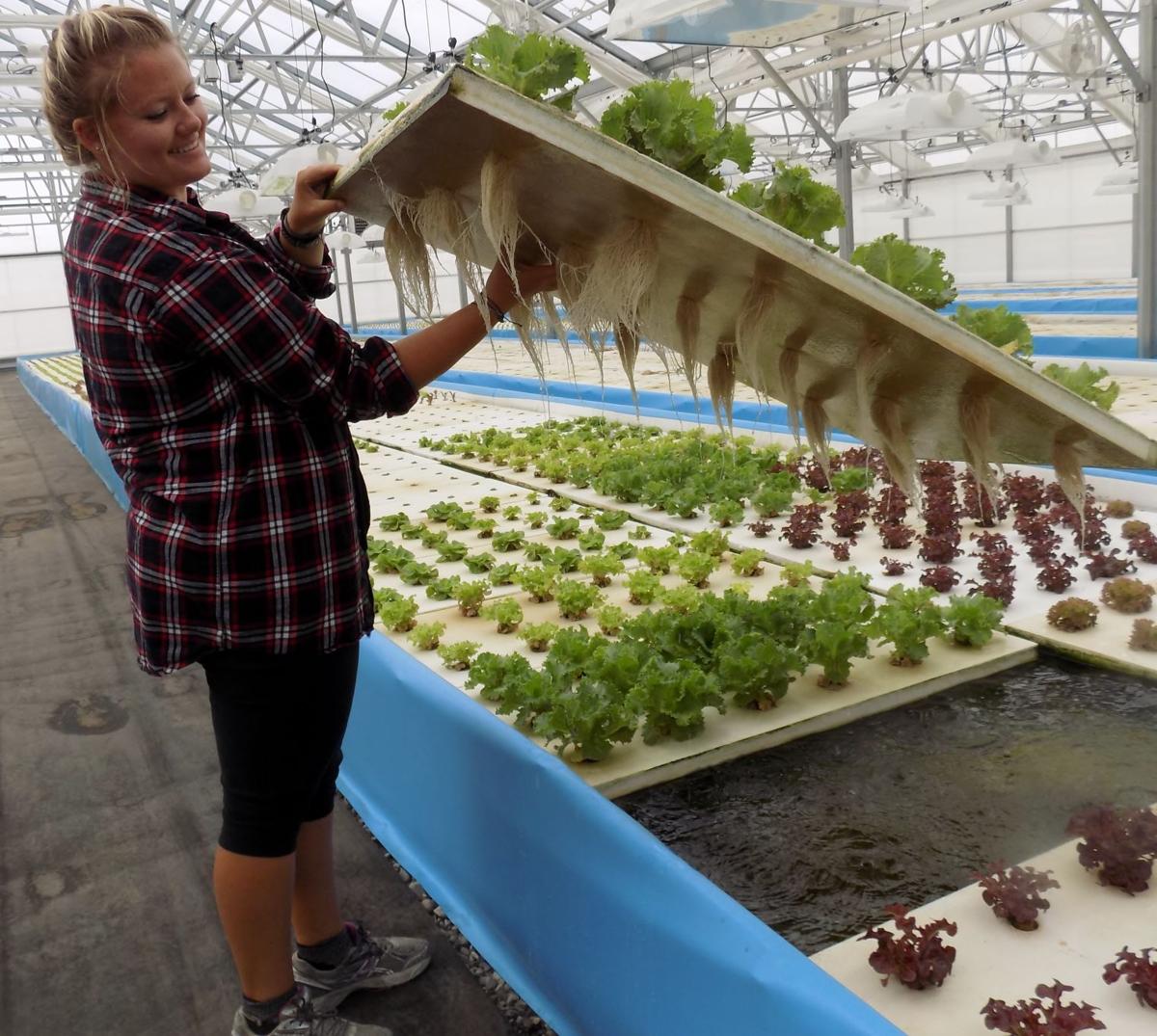 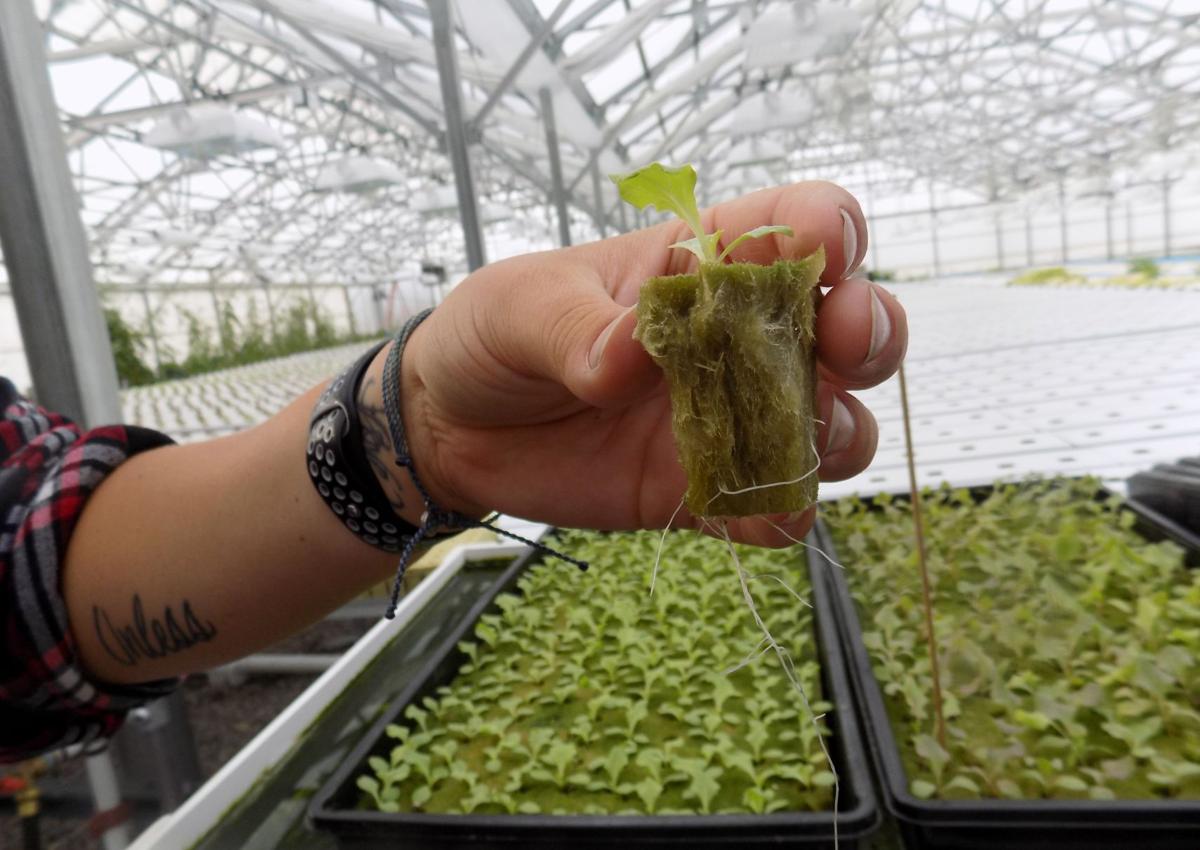 Veronnaka Evenson shows off a seedling at Swanky Roots, her new aquaponics greenhouse near Billings, Mont.

Veronnaka Evenson shows off a seedling at Swanky Roots, her new aquaponics greenhouse near Billings, Mont.

BILLINGS, Mont. – The quaint tray of free “ugly” heirloom tomatoes at the front of Veronnaka Evenson’s greenhouse on the outskirts of town could make a visitor think she’s running some kind of fringe hobby operation.

That visitor would be wrong.

The size and scope of this new aquaponics business is as impressive as it is unexpected, not least here in cattle-feeding, wheat-growing, beet-digging Yellowstone County. This 30,000-foot greenhouse near Duck Creek houses a year-round growing operation that, when running at full capacity in coming weeks, will produce 1,000 lettuce heads a day and close to 10,000 fish a year.

It’s already taken two years to get to this point: a greens-only soft launch and a toe-dip into Billings’ budding local food scene. But the 25-year-old founder of Swanky Roots is playing the long game. She’s positioning her business to be the millennial version of her parents’ businesses: a ranch and a feedlot, links in the long cattle chain that power the state’s agricultural economy.

“Farmers and ranchers love their land and their animals, and we’re the same way, we’re just trying to find a different way to use our natural resources,” Evenson said. “We want agriculture to stay in Montana and we want to see people eating fresh, healthy food.”

“Water is such an important resource and we are using it efficiently to raise both protein and fresh, leafy greens year-round,” she said. “We need this in Montana.”

Aquaponics is a combination of aquaculture – fish farming – and hydroponics, cultivating plants in a symbiotic environment. Evenson founded the business in 2016 with her mother, Ronna Klamert, maiden name ‘Swanke.’ That same year, Veronnaka graduated from Montana State University with degrees in plant science and agricultural education.

Aquaponics is as sustainable as it gets: an integrated growing system between fish and plants – protein and vegetable – that grows food with no chemicals, no soil, no waste and one-sixth less water than conventional farming. In aquaponics, the nutrient-rich water from raising fish provides a natural fertilizer for the plants and the plants help to purify the water for the fish.

If there were a textbook on how to market to health-conscious, provenance-obsessed millennial consumers, aquaponics would have its own chapter. That demographic also has more discerning taste, something aquaponics agriculture can deliver.

“In the field, plants put their energy into their roots, whereas here that energy can go into making tasty leaves or fruits,” said Evenson, plucking mint leaves, tomatoes and kale from her test plots to sample.

Swanky Roots is Montana’s largest aquaponics operation, but smaller ones – like the well-known aquaponic towers at the University of Montana – are dotted around the state. Elsewhere in the U.S., large commercial aquaponic farms are already providing food to grocery store chains, hospitals and institutions. With the passage of Proposition 64 making it legal to grow cannabis, many California home growers are doing it aquaponically.

Swanky Roots uses the "Clear-Flow Aquaponics System" developed by Nelson & Pade, a Wisconsin-based manufacturer. The only input into the system is fish food, no growth hormones and no antibiotics. The fish eat the food and excrete waste, basically ammonia, which is then converted by bacteria in a special microbial tank into nutrients the plants can use.

“You can’t take a cow patty and put it on a plant and expect it to live,” Evenson said.

The renewed, nutrient-dense water is piped using gravity down to sloped beds of plants, each in its own hole punched into floating rafts. The plants begin as seeds – clean, to keep disease down – and are policed by introduced bio controls such as predatory mites and beetles and ladybugs.

Aquaponics systems can grow any number of plants –lettuce, herbs, kale, peppers, tomatoes, kohlrabi, sunflowers, even tropical fruit trees – and fish – tilapia, bluegill, sunfish, crappie, koi – but the fish and plants should have similar temperature and pH needs. As a general rule, warm, fresh water fish and leafy crops, such as lettuce, greens and herbs will do the best.

Swanky Roots will raise lettuce – nine varieties, including oak leaf and butter – and bluegill, imported from McCook, Neb. at 45-cents a pop, as per the Montana Fish, Wildlife and Parks invasive species rules. (Those same rules don’t allow Evenson to raise popular tilapia, another fish that does well in an aquaponics system.)

Evenson has eight 1,200-gallon tanks each stocked with 900 bluegills that will grow to be three-quarters of a pound at harvest. Because water is exchanged every hour – up to 500 gallons of fresh water are introduced to the system weekly and three air blowers infuse the water with oxygen – the fish can tolerate a high stocking density.

Evenson, her mother and another employee, Hope Berg, feed the fish five times daily and clean the filters every day. It’s something that could be automated, but getting up close with the fish has value.

“Fish need to be fed every day just like cows,” Evenson said. “Feeding time is a great time to really look at the fish, see the sick ones. That’s what my dad does.”

Evenson’s parents, Gene and Ronna Klamert, own Bullseye Feedlot across Story Road from Swanky Roots. They also own the 60-acres the greenhouse sits on and a ranch north of Roundup.

Evenson sells her lettuce to the Laurel Farmer’s Market and to people stopping by the greenhouse. She has her eye on the nascent Yellowstone Valley Food Hub and area restaurants, but she’s waiting until she can get her production cycle where she wants it. At the moment, her lettuce is taking 60 to 65 days to reach harvest size; she wants to get that down to 40 to 50 days. In about a month, she’ll be producing 600 heads of lettuce every other day; she wants to get that to 1,000 heads every day. Lettuce will retail for $3.

“We’re waiting for our water to mature,” she said.

Mature water is water that has the requisite nutritional composition to facilitate optimal growing. It’s not yet mature in part because of a considerable setback earlier this year. In January, 2,000 fish died virtually overnight, the result of excess ammonia from bringing in so many fish at once.

“It was rough, especially when we couldn’t do anything about it,” she said.

It wasn’t as bad as it could have been. It wasn’t a disease, which could not only wipe out the fish, but require a system reset to reestablish the microbial communities and nitrogen balance. To guard against that possibility, the imported fish spend three months in quarantine in one of eight nursery tanks before being introduced to the larger fish community.

At full operation, the system will use 10,000 fish. At occasional intervals, a few thousand fish will have grown to full-size and will be harvested, cleaned and sold. To be harvested, the fish will be moved into one of four slightly salted water tanks that are gradually chilled. This hasn’t happened yet. Nor has the gutting of what Evenson hopes will be 900 fish every five weeks or so. To market them, Evenson envisions a mobile gutting parlor and occasional email blasts to home cooks. At under a pound each, restaurant chefs aren’t interested, she said.

“The fish take up most of our time, but they are really a byproduct of the system,” Evenson said. “Having fish to sell is an extra, added bonus.”