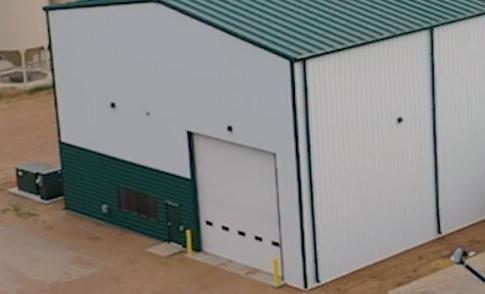 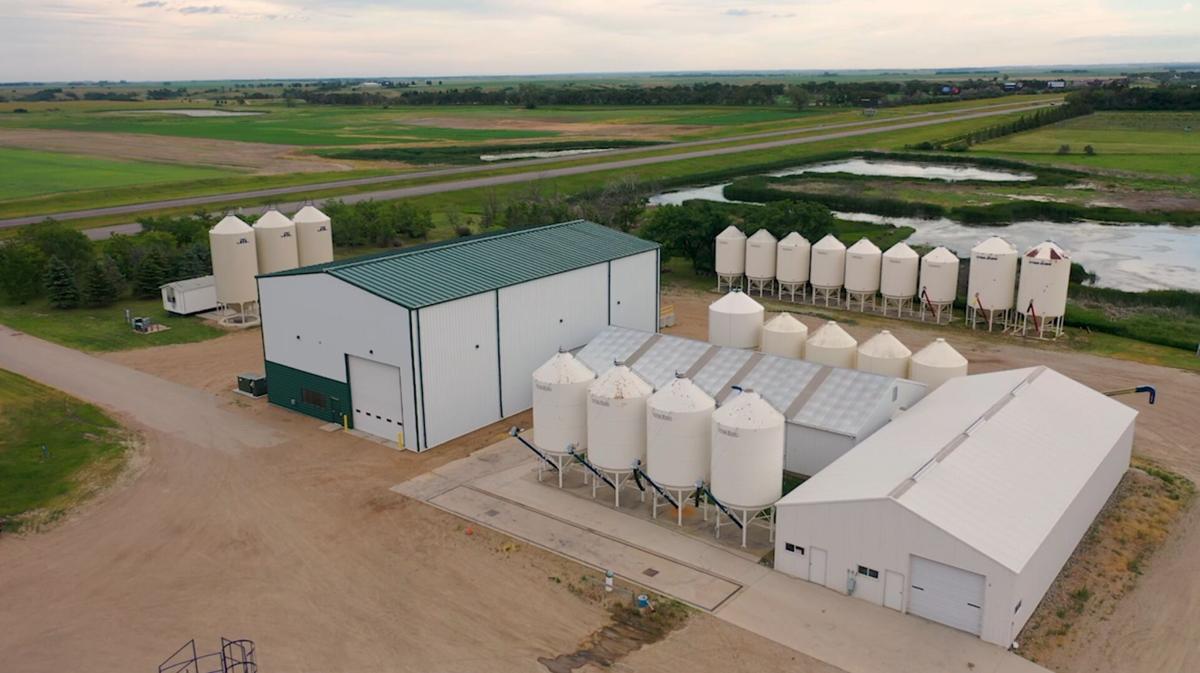 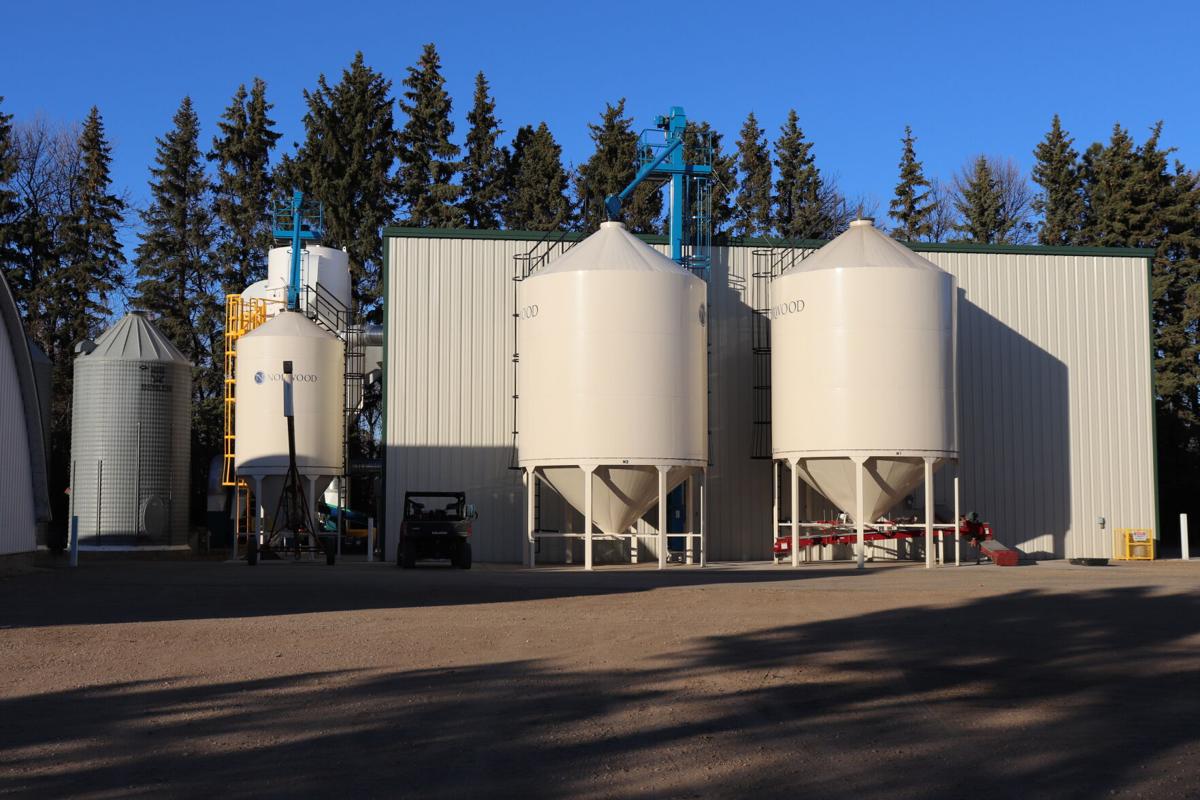 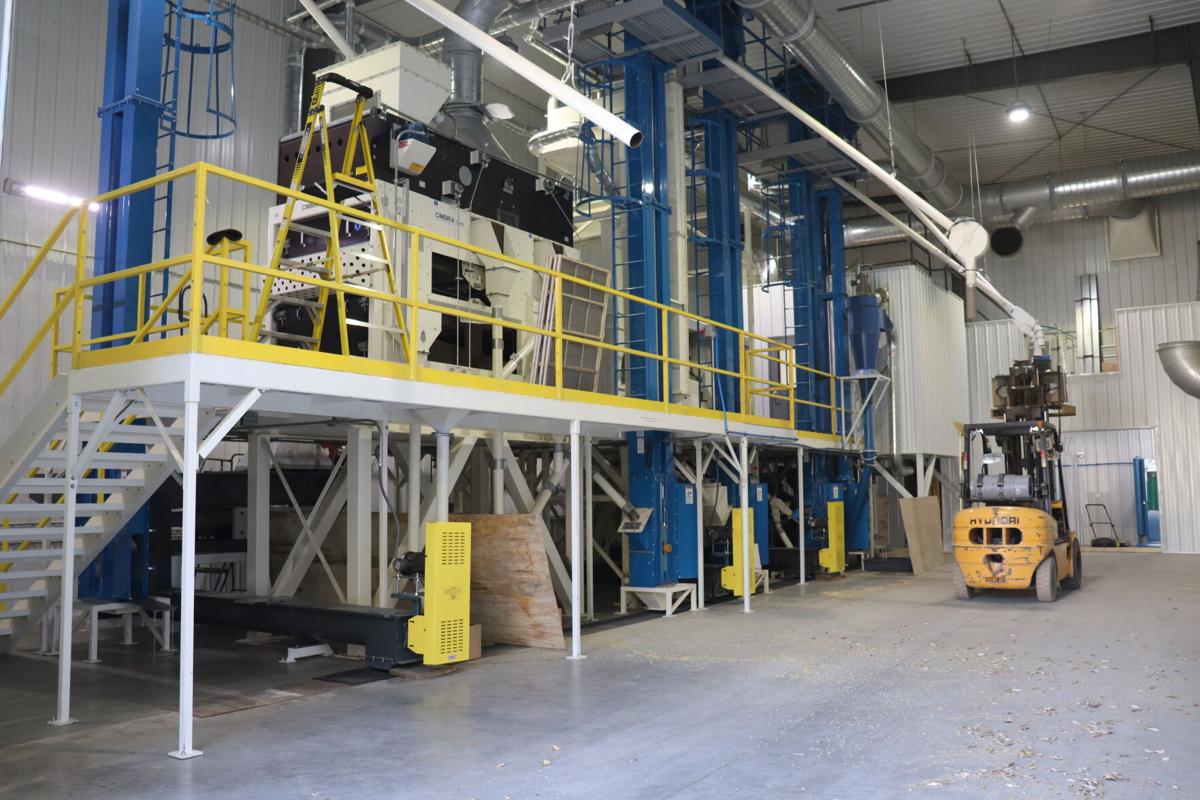 This is the inside of the new seed plant at CREC but the others have the same equipment. 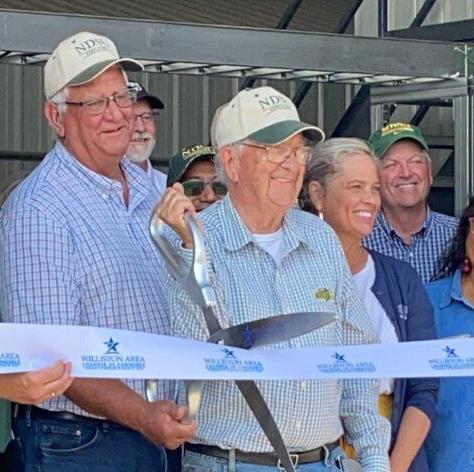 These new plants exclusively condition the Foundation seed grown at each facility, and the amount of seed that can be cleaned has been increased up to tenfold.

All the buildings upgraded from the older-type seed facilities, with several floors, to a horizontal, one-floor building, where seed cleaning can be seen from start to finish. Such seeds as chickpeas and soybeans, seeds that weren’t part of the program from the 1940s through 1960s, can now be handled gently as they move through the seed conditioning process.

NCREC Director Shana Forster was excited about the new facility, which she says is a significant upgrade to the old plant. NCREC finished construction this year, and in fact, just got the color sorter in July in time for the ribbon-cutting.

“We’re excited about the new plant and we’ll be using the optical color sorter for the first time at the end of harvest this growing season,” she said.

The high-tech optical sorter is the one piece of equipment that all high-tech seed conditioning plants need – and all three plants now have it. The sorter is used for separating particles based on color and removing impurities of similar size and density.

“The optical sorter can sort seed by shape, size, and color, so it is very useful to, for example, get wheat out of durum or yellow flax out of brown flax,” she said.

Forster said their old plant, built in 1949, was one of the first buildings at the research center, and had several floors to it. It wasn’t capable of handling the new crops like soybeans or pulses.

“When they added on to the plant in the 1980s, we were mostly producing small grains. The old plants could handle those drops (from one floor to the next), but when we moved into soybean and pulse crops, those crops were much more sensitive to those drops and the old facility would break those,” she said. “Now our building is on one level.”

NCREC grows up to 10-12 crops per year for Foundation seed. Some of the crops they have grown include: lentils, peas, soybeans, durum, spring wheat, oat, flax and barley.

“Every year is a little different. If we sell out of a variety, we want to make sure we replant it, so it varies on the variety and the amount of seed we grow,” she added.

At Williston’s WREC, Director Jerry Bergman cut the ribbon during a ceremony at the plant, along with area producers, ag officials and others.

“We’ll be able to purify seed that may have different weeds that we couldn’t with the old plant, so we’ll produce higher purity seed and more crops with this plant that will handle about 200 bushels an hour. Our old one did only 35 bushels an hour,” Bergman said.

Kyle Dragseth, farm manager at WREC, said the former plant was built in 1954 and was also on several levels, making it difficult to condition seeds.

“It’s hard keeping an eye on the seeds I’m cleaning when they are on different levels, and to get to the last level, the fifth floor, I had to pull down a ladder,” he said, adding they raise some 26 different crops at WREC, including specialty crops like safflower and chickpeas.

Dragseth was excited about having an optical sorter.

“Theseed plant is equipped with an optical sorter with infrared lighting designed for the most complex color sorting,” he said.

He said they needed better conveyors for the delicate pulse crops.

“It was very difficult to clean chickpeas and other pulse crops in the old facility,” he said.

At Carrington, CREC Director Blaine Schatz said they had been working on the request for a new seed plant for a long time.

“The need for this facility has been a part of our long range plans for more than a decade. I has been 10 years identifying the need and looking for support to build the facility,” he said.

Their former plant, built in 1963, was not designed to handle the increase in the number and kinds of crops, including pulses, and the volume of seed needing to be conditioned every harvest.

“When we were working with the 1963 plant, it was designed for agriculture at that time. The scale of the facility was much different than the scale of what is required now,” he said.

At CREC,spring wheat, durum, barley, flax, soybean, field pea, buckwheat and cowpea are grown as Foundation seed. Varieties and types of crops can change from year to year, but the volume is huge compared with the seed they cleaned in the 1960s.

“We had worker safety concerns with the old plant. The old plant had equipment distributed on five floors and left a bit to be desired in terms of dust management on behalf of our workers,” he added.

CREC finished construction in January 2021 and was able to condition seed for slightly more than one season. They have found the new plant is operating just as they hoped, with an easier, more effective design to clean between varieties.

“The plant has been designed in such a way to confidently clean out all the equipment between varieties,” he said.

Schatz said they needed the up-to-date equipment in the new, environmentally-controlled facility to produce the most genetically pure and cleanest seed possible for North Dakota seedgrowers.

Some of the equipment the new facilities gained in their new plants include: an electronic eye with an optical sorter; seed conditioning machines, such as an indent mill, a gravity table and other handling equipment; pure seed conveyors and elevators; and extensive dust handling and collection equipment.

The new plants work with Foundation seedgrowers in their area, but can sell seed all over the state.

Forster explained that they do not raise registered or certified seed.

Directors at the three facilities said the new seed plants were necessary to continue providing the state’s seedgrowers with high quality Foundation seed.

In Williston, Bergman said the plant would not have been a reality without the help of farmers in the area, especially Tom Wheeler.

“Tom Wheeler made it happen,” Bergman and others at WREC said.

Wheeler went with Bergman to the Legislature to find the initial funding, and worked to find more funding all along the way.

With the buildings costing some $1.5-$2.5 million, producers in the area were instrumental in helping organizations raise the funds.

Many businesses gave money to the three projects, as well.

Forster said, “Our advisory board and local producers were instrumental in getting the seed plant up and running. Without that local farmer grassroots support, it probably would not have happened.”

At the ribbon-cutting, she recognized everyone who helped make the new seed plant a reality.

Forster became the NCREC Director in 2016 after being an assistant pulse breeder since 2008, so she took over the fundraising part of the buildings.

“That has been our number one priority for 13 years to get the seed plant operational. It has been talked about every year since then, so it is nice that we can close that chapter,” she said.

The three new facilities will now be able to handle Foundation pulse, oilseed and small grain crops, maintaining the genetic purity of Foundation public seed varieties – and do it fast and efficiently – with a high regard for worker safety and dust management.

Ag economists study the juncture of too much heat, crop insurance

Like hail, wind, and precipitation, too much heat is often the cause of crop insurance claims.

Every year comes with a different set of challenges when it comes to making a living in agriculture, but the challenges farmers and ranchers h…

WEST FARGO, N.D. – Educational programs have always been an important part of the Big Iron Farm Show, and this year will be no different as th…

What started as a napkin drawing that expanded to over a dozen patents has just revolutionized the self-propelled farm sprayer industry.

This is the inside of the new seed plant at CREC but the others have the same equipment.