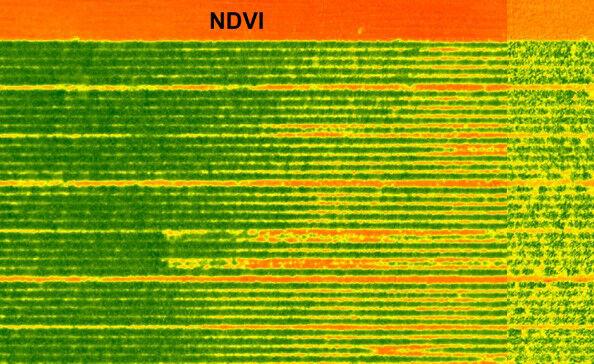 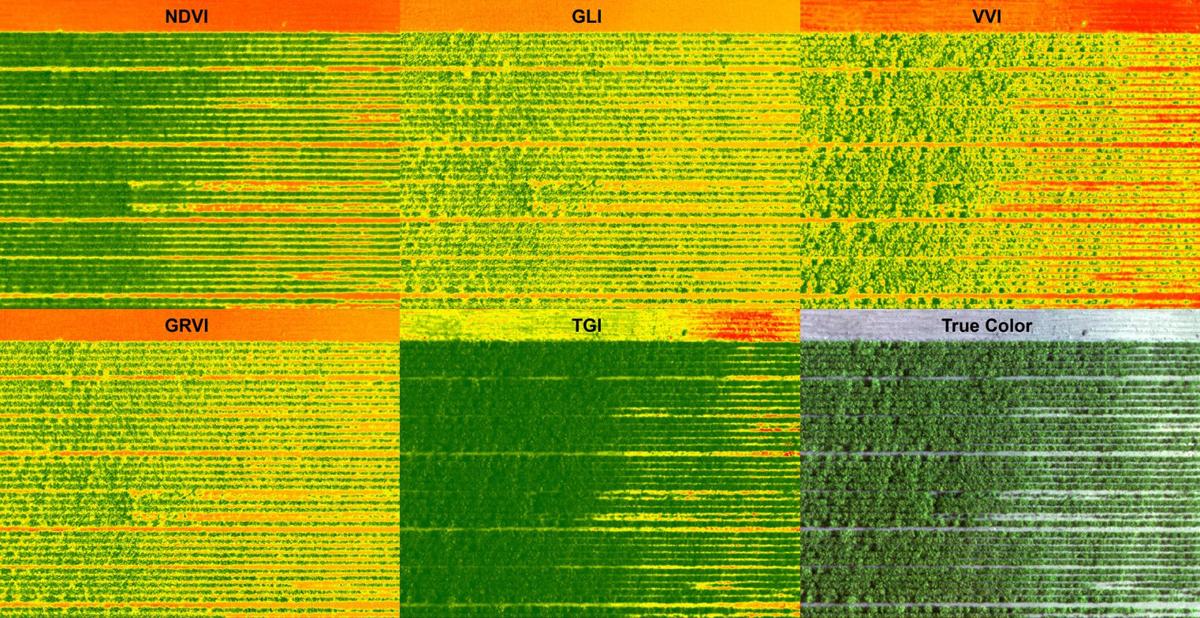 Many producers wonder if there is more information they can get about their crops from a less expensive unmanned aerial system (UAS).

“There is information we can glean without having to have all this technology that goes into some of the more complex methods of crop assessment,” he said.

Vegetation indices are widely used to monitor ag and forest health. They generally rely on the ratio or inverse relationship between the red and near-infrared bands of the electromagnetic spectrum.

One problem with a standard UAS platform, such as a DJI Phatom or a DJI Mavic, is that these systems and others like them do not collect in the near-infrared portion.

“There are a number of camera modifications and solutions that exist for this problem, and there are also after-market solutions ranging from the cost of a few hundred dollars to a few thousand dollars or more,” he said.

The MicaSense 5 band sensor for vegetation mapping includes a red edge and a near-infrared sensor on it, and runs about $5,000. Its 10-band sensor runs about $11,000.

However, it requires a more expensive platform to get the sensors up in the air for monitoring.

What can we do with a standard three-band combination and how can we build on what we already know?

Phantom 4 or Maverick are inexpensive UAS platforms and have good 20-megapixel cameras on them.

“We can get exceptionally good imagery with these and I think they are underutilized in the context of precision ag,” he said. “Either people are not aware of the usefulness of them or they simply haven’t tried to work with them.”

“NDVI is based on the behavior of electromagnetic energy as it interacts with the plant structure,” he said.

“This relationship between absorption and reflection in the red and near-infrared portions is what allows us to calculate the indices that represent vegetative health,” he said. “This method works well if your camera collects in the near-infrared portion, however, standard cameras do not. Hence we have what I like to call the ‘not-new’ problem.”

There are downsides to NDVI. It is very sensitive to atmospheric, soil, anisotropic and spectral effects.

“That has been evidenced in the development of additional vegetative indices that take into account some of this atmospheric or soil sensitivity effects inherent in NDVI,” he said. “But they still require the near-infrared portion of the spectrum.”

Kramar also talked about indices that have been developed that only use the RGB components of the electromagnetic spectrum, with limited success.

Those indices are the green/red vegetation index (GRVI), the green leaf index (GLI), and the triangular greenness index (TGI).

“In green vegetation, green reflection is higher than red reflectance,” Kramar explained. “In soils, green is lower than red, and in water, they are equal.”

This particular index is “surprisingly easier to interpret and implement” because by using a standard NDVI calculator, users can simply replace the near-infrared with the green band and come up with this measurement.

“Results match what we can do when we visually determine what a healthy plant is and is not in the imagery, and that tends to be fairly granular in the representation,” Kramar said.

It performs well at both the micro and macro scale, Kramar says. He showed a slide of a GRVI in a soybean field at Carrington (N.D) Research Extension Center (CREC).

“The bare ground areas show up very well, and there is good separation between ground and plants,” he said.

The GLI, which was developed in 2001, is calculated as two times green minus the red minus the blue divided by double the green plus the red plus the blue.

“The GLI was designed to adjust for the greenness and yellowness of the crop, and was designed for low altitude monitoring systems,” he said.

This index can be used for crops in all growth stages.

“This particular index is a bit more difficult to interpret and implement simply because we are using three bands. In ArcGIS, you must use the ‘float’ command with the Raster Calculator, but there are open source alternatives that don’t require expensive software or licensing,” Kramar said.

Not unlike GRVI, the GLI results match that, which can visually be determined as healthy or not healthy in the imagery.

“Like most of our indices, you do have to be careful if you have water features,” he said. “They do not model well without the near-infrared band.”

This index also performed well at both macro and micro scale.

“In the same field of soybeans at CREC, we have good separation between bare ground and plant. There is also good differentiation on how green the soybeans are in each plot,” he said.

The second field was contrasted against the true color image, and both of these two indices worked well.

There is a little bit of a difference between the GLI and the TGI.

“The GLI was used to measure green versus yellow, while the TGI was used to estimate leaf chlorophyll and N content,” he said.

In the same two fields of soybeans at CREC, there was less contrast than with the previous indices displayed.

“That is not necessarily surprising given that we are looking at chlorophyll and nitrogen.” Kramar said.

But the indices have patterns that are similar.

“What is nice about these indices is that while they do appear somewhat varied, we see some similar patterns among them,” he said.

In the soybean field, Kramar said the “little bit of yellow that shows poor health” also showed up in the NDVI and the GRVI, but less in the TGI.

One issue with NDVI is it appears that washed-out areas that may be bare ground get washed in with plant vegetation.

“We could lose granular representation in terms of pixel size,” he said.

While the GRVI doesn’t do that, the TGI also washes out.

Kramar pointed out producers can get good information, without spending money on expensive systems.

“We can get a reasonable measure of plant health without implementing the near-infrared portion of the spectrum,” he said. “Water is the largest confounding factor and that won’t change. It really requires near-infrared to isolate it out, which is not surprising.”

In some cases, non-infrared vegetation indices provided a more granular or detailed output than NDVI.

Of the traditional types of non-infrared vegetation indices, they each have their own strengths and weaknesses, depending on which portion of the bands are being used.

“In terms of the TGI index, it is more about chlorophyll, and to a certain extent, N, and the GLI is used for yellowness versus greenness,” he said.

Kramar said there was not a single index that could answer every question about a plant’s health.

“Indices can provide insight for better management. Oftentimes, that little bit of difference they provide can give us the information we needed about our crop health,” he said.

For example, Kramar said they could be used to look at annual cover crop biomass.

“It is a matter of getting out at the right time and using the correct resolution,” he said. “At CREC, we used standard RGB bands and then used regression tree models to estimate above ground biomass.”