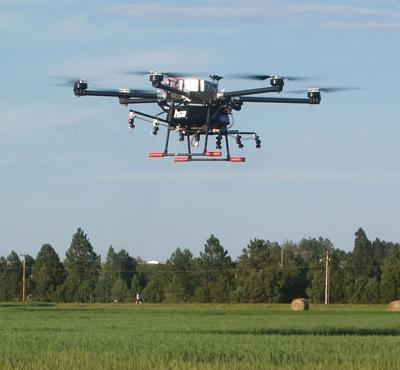 The UAV sprayer flies low to spray a patch of weeds in a field. 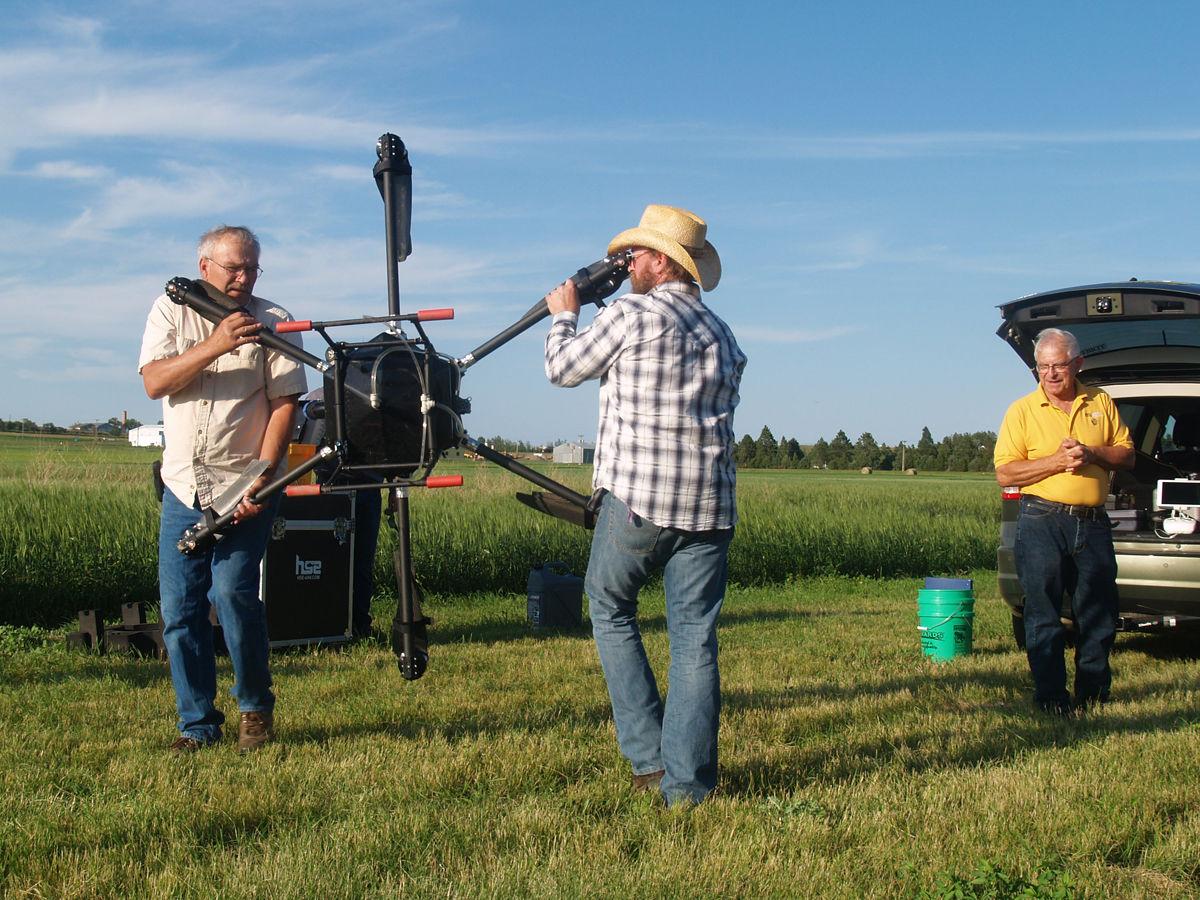 The AG V6A+ sprayer is calibrated for magnetic north at field days at HREC. John Nowatzki explains process at left.

The UAV sprayer flies low to spray a patch of weeds in a field.

The AG V6A+ sprayer is calibrated for magnetic north at field days at HREC. John Nowatzki explains process at left.

The AG V6A+ UAV was built in the U.S. by Homeland Surveillance & Electronics, and is part of NDSU’s ‘Smart Farm Project.’ NDSU has partnered with companies to bring these UAVs in agriculture to North Dakota producers.

The UAV sprayer carries four gallons of water/chemical to spray in a 6-foot wide boom pattern. It can run for 30 minutes and can average 33 acres/hour.

At field days, Nowatzki noted some potential uses for the UAV sprayer were spot applications on a patch of weeds in a field, or to eradicate herbicide-resistant weeds found from information gathered from a UAV that identifies high-resolution vegetative imagery.

Herbicide-resistant weeds, for example, show up with a different vegetative color on a UAV installed with an infrared camera.

One of the AG V6A+ main uses would be to spray a patch of weeds existing in an otherwise weed-free field. A UAV sprayer has the dexterity and efficiency to spot spray patches or individual weeds, whereas a farmer would have to walk inside a huge field to spray the weeds. That is time consuming work.

“While 90 percent of the field may be weed-free, there may be a patch of weeds in one area that a producer wants to get rid of before the weeds spread. The AG V6A+ UAV sprayer would go out to a precise location and spray the patch of weeds,” Nowatzki said.

The AG V6A operates from an operator on the ground, who controls all the movements of the sprayer, programming the sprayer to fly high above a field, or fly lower in the field to target the spray on an individual weed or a specific patch of weeds.

“Because it costs $18,000, I don’t see producers buying one to spot spray in one farm field. Rather, I see it being used by an agronomy company that services many producers in their area,” Nowatzki said.

These companies service producers by advising them what their particular crops might need before and during the growing season, and many of these companies own a UAV, which flies over farmers’ fields and identifies diseases and weeds growing in their crop fields. It is not hard to speculate that some of these companies would go the next step and own their own UAV sprayer.

“Brian Otteson, director at the Casselton Agronomy Seed Farm, sees the sprayer as something that could be used after harvest to rid the field of weeds,” he said.

Another use could be on pastures or a grazing ranges, where patches of weeds are not readily spotted in the native prairie or introduced grasses.

“Patches of leafy spurge could be identified, then sprayed with the AG V6A+ UAV sprayer,” he said.

At field days, Nowatzki put water in the AG V6A+ sprayer, and showed the UAV spraying water, but if it were actually being used in the field, water would be mixed with the needed chemical.

They calibrated the sprayer at field days, before using it by walking it in a circle to find true north.

“Interestingly, the UAV sprayer calibrates to magnetic north,” Nowatzki said. The UAV sprayer has a compass in it, and needs to be calibrated each time it is used in a different location.

The EPA requires those using the UAV sprayer to have an applicator’s license for spraying chemicals. They would need another license to operate a UAV.

NDSU is now testing the sprayer with different nozzles to see which works best in what conditions, and to find what the different application rates are to use with the water available on the UAV sprayer. They are also training grad students to calibrate and use it.

At the NDSU Dickinson Research Extension Center, they are developing a ‘Smart Ranch’ concept on the same order at the Manning ranch.