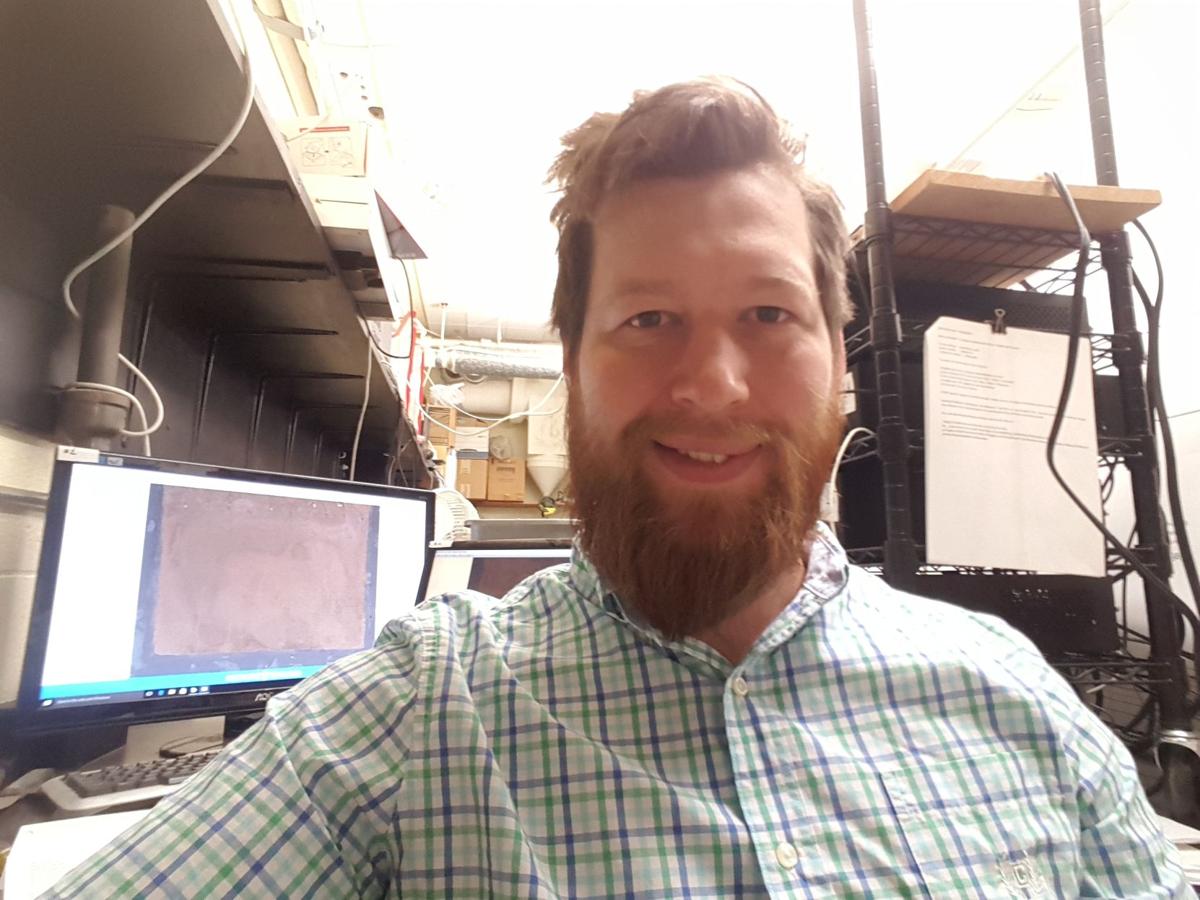 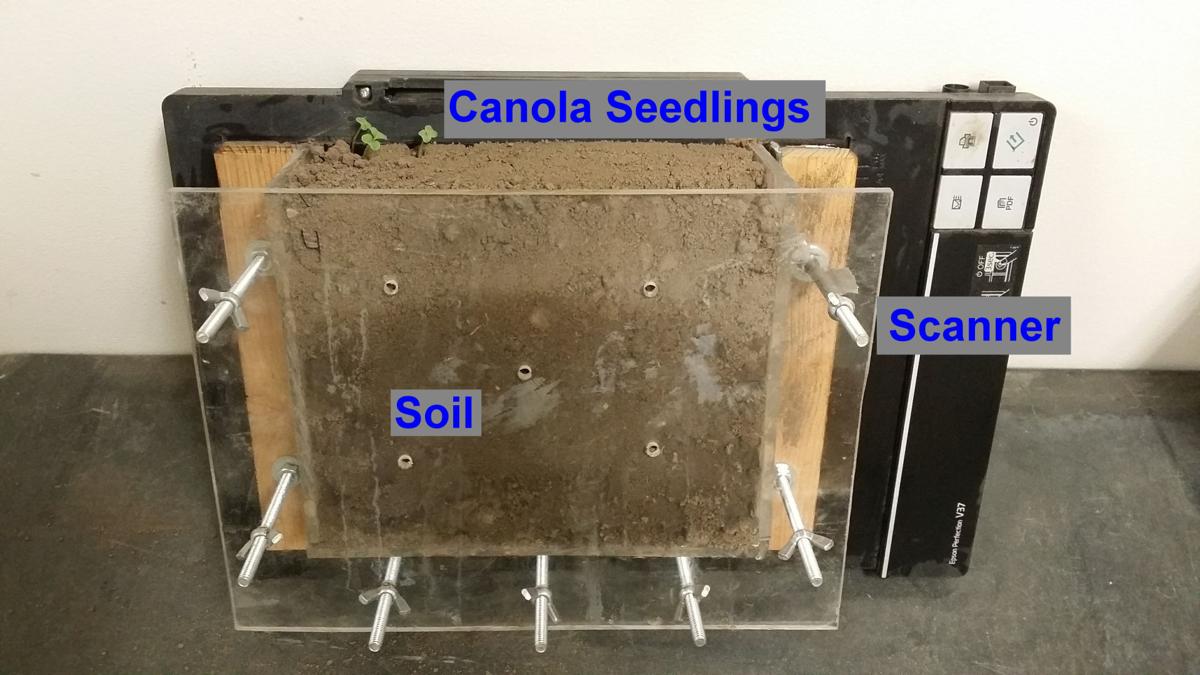 Madsen attached a rhizobox, for watching root growth, to an office scanner. Photo by Agronomy Journal. 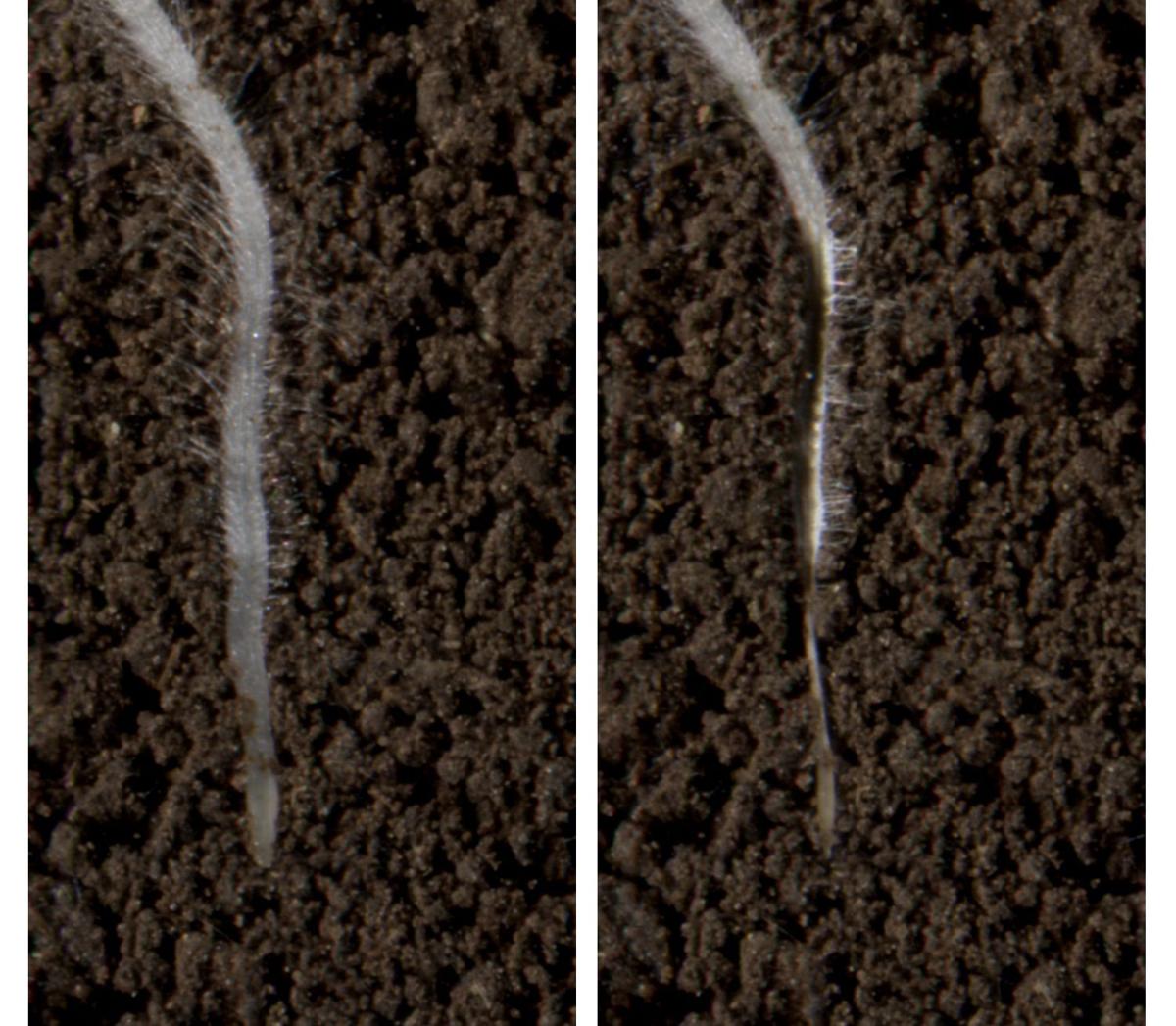 Madsen attached a rhizobox, for watching root growth, to an office scanner. Photo by Agronomy Journal.

That was studied recently by researchers at Washington State University, Pullman, Wash., who used an office scanner to show how taproots sometimes do not survive a fertilizer band.

A lot of factors go into whether or not the taproot could be damaged by nitrogen fertilizer placed under the seed. These factors include but are not limited to the rates and sources of fertilizer, soil temperature, moisture, soil type, soil structure, pH, cationic exchange capacity, porosity and soil compaction, said Isaac J. Madsen, Ph.D., assistant professor at Washington State University.

“Temperature and moisture will affect the rate at which reactions are happening and how quickly solutes are transported through the soil, which will affect how fast the ammonia – the most toxic form of the nitrogen – can travel away from that band and to the root,” he said.

When urea breaks down, it causes a spike in the soil pH and results in ammonia – a gas. Pore space in the soil is important because the more pore space, the farther the ammonia can travel within the soil, he said. The farther it can travel, the closer it can get to the root.

“When ammonia arrives at the root in too high of concentrations, you end up with injury to the taproot,” Madsen said.

His work and that of his advisor, William L. Pan, Ph.D., was recently published in Agronomy Journal: “Assessment of Relative Potencies of Nitrogen Sources on Seedling Root Systems.”

As an undergraduate, Madsen took technology developed by Pan and expanded upon it beginning in 2009.

He built a 7-inch tall by 8-inch long by 3-inch thick rhizobox – a clear box made of polycarbonate to study roots growing in silt loam soil – and epoxied it to the face of an Epson V37 office scanner.

“It’s probably one of the lowest-tech science solutions you can use,” Madsen said with a laugh. “It can be difficult to get set up and get the plants to grow well, but once the plants are growing you can collect excellent images of root growth. Science doesn’t always have to be expensive – sometimes it’s more about being creative.”

Scans were taken every 24 hours and saved on a hard drive. Root tips, lateral branching and band locations were easily detected and marked.

“You’ll read papers from the ’40s documenting organic nitrogen sources with damaged roots, but sometimes a picture is worth 1,000 words. With these scanners, we can see the damage and it makes sense to people,” Madsen said. “Sometimes it’s just getting the good pictures.”

Banding N below seed is common for wheat production, but the placement of fertilizer below the seed has shown to decrease yields and damage the root system of canola. In Washington, growers are experimenting with a canola/wheat rotation so naturally they want to use methods that have worked with small grains.

But wheat has a fibrous root system, while canola has a taproot. Previous studies have found that not all crops with taproots respond the same as canola to a fertilizer band placed below the seed.

Madsen set about comparing the effect to canola taproots from three N sources at various rates. Urea, ammonium sulfate or urea ammonium nitrate (UAN) was placed about 2 inches below the seed.

“A visual analysis of the damage to canola seedlings RSA showed all sources of fertilizer resulted in a stunted root system at the highest rates of fertilizer application,” said Madsen in Agronomy Journal. “The rates at which symptoms of toxicity occurred appeared to vary based on source, with urea showing the greatest toxicity, followed by ammonium sulfate and UAN.”

When urea was banded directly below the seed, damage occurred to the taproot no matter how low the urea rate. Banding fertilizer about 2 inches away from the seed or increasing canola seeding rates are two ways to keep the taproot safer. A 32 percent N solution was the safest product tested, and Madsen believes a coated urea would also work well. There may be other mitigating circumstances if the terrain is very hilly or there is significant compaction that would direct the taproot toward the fertilizer too quickly.

He encourages all farmers to consider timing, placement, rate and source when applying N fertilizers.

“What’s going to cause the least damage to my plants? It’s definitely not a one-size-fits-all approach, ” he said. “Maybe it’s worth buying more expensive fertilizer and not damaging your seedlings. It depends on when and where you are applying and how much fertilizer you are putting on.”

Want to buy antique POSTCARDS and photographs. WIll make house