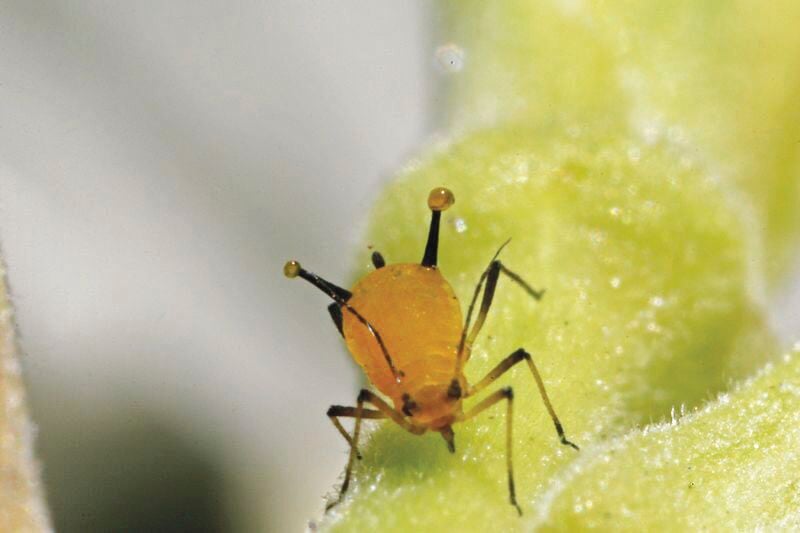 An aphid excreting cornicle wax. It is a defense against predators. 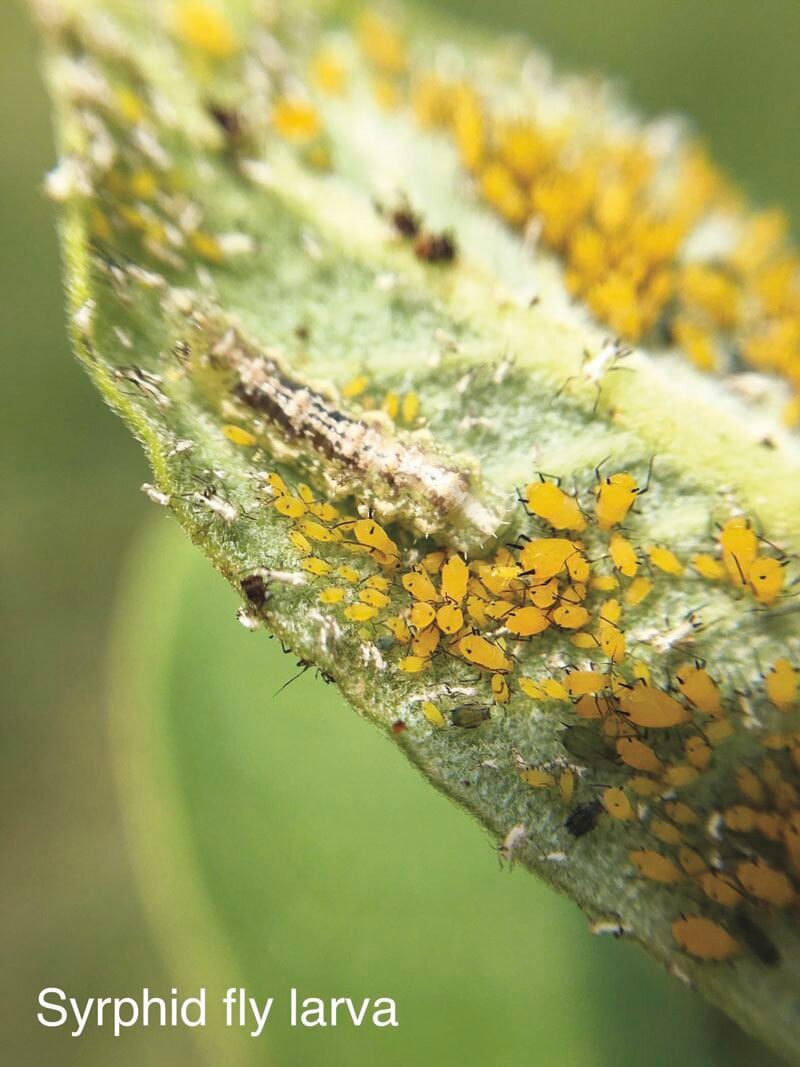 Syrphid flies, also called hoverflies, prey on aphids. They are pollinators as adults. 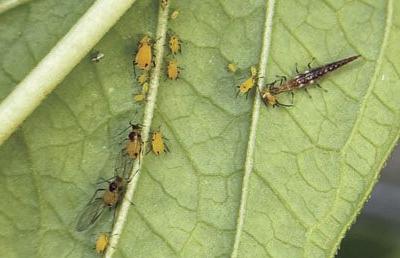 Lacewing larvae with aphids. They grow up to be lacewings with delicate wings. Green lacewings come to porch lights at night. They lay eggs on stalks near to their aphid prey.

The tiny aphid holds an unenviable spot in the insect world’s food web. It’s basically the low bug on the totem pole.

It is actually the larvae of the first three insects which prey on aphids. The Braconid wasp has a more sinister manner of predation.

“The Braconid wasp is super tiny and they lay their eggs in the aphids,” Green said. “The wasp larvae hatch in the aphid and turn them into bloated, papery ‘aphid mummies.’”

While aphids have their marauders, they also have their benefactors; primarily ants. Aphids are “farmed” by some ants, like livestock. The ants form a symbiotic relationship with the Aphids, protecting them from predators in return for nutrients.

Aphids secrete a substance known as honeydew. It is a treat to ants because of its sugary content. Some ants have even taken to “milk” aphids by stroking their abdomens.

Aphids don’t rely solely on the benevolence of their ant wardens. They have certain innate defense mechanisms.

While not a true defense, aphids can discharge pheromones in reaction to danger. This would be an alarm pheromone which triggers the fight or flight response in animals and insects.

According to Mike Skvarla, a co-host of The Arthro-Pod podcast and entomologist with the Penn State Extension, alarm pheromones are “releaser” pheromones. They disperse quickly into the air and announce “danger is here.”

“These are energetically cheap to make by the aphid,” Skvarla said. This way they will not decrease the insects’ fitness for escape.”

The most common aphid pheromone is (E)-beta-Farnesene. This is also a primer pheromone. Which means it triggers a developmental change if it subsists for a long time. The aphid will grow wings in about five days, Skvarla said.

Aphids will also drop off a plant to escape. If attacked, the aphids excretes a sticky lipid mixture out of its cornicles or siphunculi. What Skvarla calls its “tailpipes.” This mixture, called cornicle wax, can get on a predators legs and cause them to tangle up. Thus allowing the aphid to wiggle free and make its escape.

The oleander aphid has a particularly ingenious way of protecting its eggs. It absorbs sap from the oleander bush, which is toxic. They then coat their eggs with the poisonous extract.

But, don’t feel too happy for the aphid. These insects are a parasite that feed on the sap of plants. They suck the juices out. There are more than 4,400 species of aphids. Of these, about 250 species are serious pests to ag.

According to John T. Sorensen, of the California Department of Food and Agriculture, aphids cause more plant damage than any other insects. They also often transmit viruses which can kill plants. Potatoes, cereals and sugarbeets are among the most common victims to such viruses.

Gardeners also dislike them to their unsightliness. They can also create a mess with their honeydew and the sooty mold it creates on vegetation.

“Now that more people are growing milkweed, they will see them,” Green said. “People worry about them because they see so many and freak out thinking the monarchs won't be successful there.”

They also are able to reproduce without mating which is why their populations get very large, very fast, she said. They do this by "telescoping generations." This is when a female aphid carries another female aphid which is already pregnant.

Gun shows available in Iowa, Colorado in May

Anyone in Nebraska looking for a gun show will have to bop on over to Iowa. The Hawkeye State has three shows in May.

Sweet Corn Primer: Which variety do you prefer?

Breeders have successfully incorporated certain genes to improve upon what was once considered ‘standard’ sweet corn. Here’s a rundown of what to know about each type of sweet corn commonly available to gardeners.

Wilber: Vitáme Vás to the Czech Capital of the USA

Wilber, Nebraska, may be the best-known small city in the state. If not, it’s in the top two.

‘Back in Bloom’ Tulip Time Festival in Pella May 6-8

After last year’s hiatus due to the pandemic, residents are excited to welcome visitors back to town for the 86th Annual Tulip Time Festival i…

Sherry Jarvis, owner of Heart in Your Hand Horsemanship in Burwell, will be the featured guest on the upcoming webcast, “Open for Business: A …

The surprising power of chicken manure

Poultry litter is a natural choice as farm fertilizer. Although it’s widely used, there’s still a lot we don’t know about how — and if — poultry litter helps crops. In new research, scientists in Mississippi tested just that.

Nine cowboys from the Nebraska Panhandle are being honored with an induction into the Nebraska Sandhills Cowboy Hall of Fame.

Maybe messy at first, manure digesters can pay off

Dairy farmers are always searching for ways to diversify and add value to their businesses. Many are quickly seeing benefits of using manure a…

An aphid excreting cornicle wax. It is a defense against predators.

Syrphid flies, also called hoverflies, prey on aphids. They are pollinators as adults.

Lacewing larvae with aphids. They grow up to be lacewings with delicate wings. Green lacewings come to porch lights at night. They lay eggs on stalks near to their aphid prey.