A key distinction to be aware of is that soil insects such as white grubs and wireworms can only be controlled with planting time treatments. Cutworms and other caterpillars potentially can be controlled postemergence.

Wireworms and white grubs are most often associated with fields that have been in pasture or CRP where the grasses were allowed to grow for more than one year. It is rare to see these problems in continuous corn, but exceptions happen.

Since wireworms and white grubs feed underground and cutworms feed on or below the soil surface, scout for plant damage and then dig in soil around the plant to identify the insect causing the damage.

Cutworms and other insects may hinder emerging corn plants this spring, even if seed was treated with insecticide or Bt corn hybrids were used. High populations of insects can overwhelm the protection method, regardless of whether it was an insecticide applied at planting (liquid, granular, or seed treatment) or a Bt corn hybrid.

In some cases products are not labeled for the full spectrum of Nebraska insects. For example, Bt corn hybrids expressing the Cry 1F and VIP3A Bt proteins list control of black cutworm on the label, but only VIP3A lists control of another soil cutworm (dingy cutworm) species.

Cutworms can cause serious damage to corn in the first of couple weeks after emergence so it is important to scout fields early for damage. Several species of cutworms attack corn. The severity and the area affected will vary greatly, depending on species involved, previous crop history and weather conditions.

The black cutworm does not overwinter in Nebraska, and infestations depend on moths moving up in spring winds from the south. They are most commonly found in the eastern one-fourth of the state. Fields with winter annual weeds or abundant crop residue are more attractive to the egg-laying black cutworm moths in the spring.

Black cutworm moths may also be attracted to dense cover crop vegetation to lay eggs. Black cutworm larvae are light gray to nearly black in color with an overall greasy appearance, and reach 1.5 inch long at maturity. When viewed through a hand lens the skin has a rough pebbly texture. The head has two black stripes and there is a pale band along the top of the body. A key characteristic is that on the top of each abdominal segment there are two sets of paired spots which are unequal in size.

After hatching, cutworm larvae may begin feeding on the cover crop and later move to a cash crop when the cover crop is terminated. In 2016, Dunbar et al. captured significantly higher numbers of black cutworm moths in rye cover crop plots from late April through early May in Iowa.

A couple of weeks later corn plants were assessed for cutworm damage, but no significant cutworm damage was observed. Such observations reinforce the need to scout fields even when adults have been observed. True armyworm has a similar behavior to black cutworm in that it targets areas of dense vegetation for egg laying.

Several other cutworm species (dingy, claybacked, army, and Sandhills cutworms) overwinter as partly grown caterpillars and can be found more widely in Nebraska.

Dingy cutworms are pale gray to reddish brown with mottled pigmentation and light gray with a V-shaped marking on the back of each abdominal segment. They have two pairs of equal-sized tubercles on each segment, a key distinction from black cutworms where the pairs of tubercles are unequal in size.

Because they overwinter as larvae, dingy cutworms are often the first to damage corn in the spring; however, they generally cause less damage than black cutworms because they feed primarily on leaves and do not typically cut stems. In most cases, treatment for dingy cutworms is not justified unless extensive feeding accompanies poor growing conditions.

Army cutworm larvae are generally greenish-grey to greenish-brown with a freckled appearance. The larvae usually have a narrow, pale stripe on top. Mature larvae are approximately 1 ½ to 2 inches in length.

The adults migrate to the Rocky Mountains in the summer to avoid high temperatures before returning to the plains in the late summer to lay eggs. Eggs hatch in the fall and larvae begin development before overwintering.

Army cutworm larvae become active again in the late winter to early spring. Like dingy cutworms, they are among the first cutworms to appear in the spring; however, army cutworms generally climb and feed on leaves, so they typically cause less injury than cutworms that feed below ground on the stem. In addition, because they are most abundant early in the season, they usually only injure wheat and other small grains.

Claybacked cutworms are generally light along the sides with a darker brownish to reddish broad stripe on the back. At maturity, larvae can reach up to approximately 1 ½ inches in length. However, unlike dingy and army cutworms, claybacked cutworms will cut plants just above soil surface and can be economically important occasionally.

Remember that early detection of a problem is essential because most cutting occurs within seven days of plant emergence.

Generally, a postemergence “rescue” treatment should be considered if cutting is observed on 3-5% or more of plants and the worms are one inch or less in length. Rescue treatments are effective in controlling soil cutworms.

Wireworms are the larvae of click beetles. The adult beetles prefer to lay eggs in grass and the larvae can remain in that stage for up to six years, depending on the species.

Wireworms are our earliest corn pests each season, as they can feed on the seed before germination, causing reduced plant emergence. Later feeding may kill or stunt small emerged plants.

All wireworm feeding is done underground. Wireworms are white, yellow, orange, or brown with hard shells. They tend to be more numerous in fields that have been in grass or pasture or fields that have had grassy weed problems.

Wireworms prefer cooler soil temperatures under 70°F, so fields that were planted early or have heavy surface residue may be at higher risk than tilled fields.

There is no rescue treatment for wireworms, so the main decision at this time is whether there is sufficient stand reduction to warrant replanting. Fields with high populations of wireworms should be prioritized for control measures next year if they are to be replanted to corn. The use of seed treatments like Cruiser and Poncho has greatly reduced the incidence of wireworm damage. These products are excellent early season stand protectors.

White grubs are the larvae of May (or June) or Japanese beetles. They prefer to feed on grasses and most commonly damage corn in eastern Nebraska. There are two basic types of grubs.

Annual grubs complete their development in one year. Both masked chafers and Japanese beetles have similar life cycles. They do most of their feeding in the late summer and fall and are not considered serious pests of spring-planted field crops.

Three-year grubs, however, can damage corn severely in the last two years of their larval stage. The larvae overwinter deep in the soil. As the soil warms they begin feeding on plant roots. Damage to corn may not occur until the corn is in the two- to six-leaf stage. This is difficult because up to the time of feeding, the stand may look fine. Often three-year grub damage is near shelter belts where the adults may congregate to feed and mate.

To identify white grubs examine the pattern of spines on the underside of the last abdominal segment. Three-year grubs have two rows of parallel spines in a line; annual white grubs have spines scattered randomly.

Like wireworms, there is no rescue treatment for white grubs. Again, high risk areas (e.g., presence of three-year grubs the previous year) need to be treated at planting. Products for white grub control are similar to wireworm control.

If wireworm or white grub damage is serious enough to warrant replanting, consider use of planting time insecticide treatments, although the odds of damage diminish with the warming of the soil.

Jefferson County rancher Phil Perry of Oskaloosa, Kansas moved up to president of the Kansas Livestock Association (KLA) during the group’s an…

Central Valley Ag Cooperative (CVA) made $29.7 million in total profit from $2.2 billion in total sales in the last fiscal year, which ended Aug. 31. 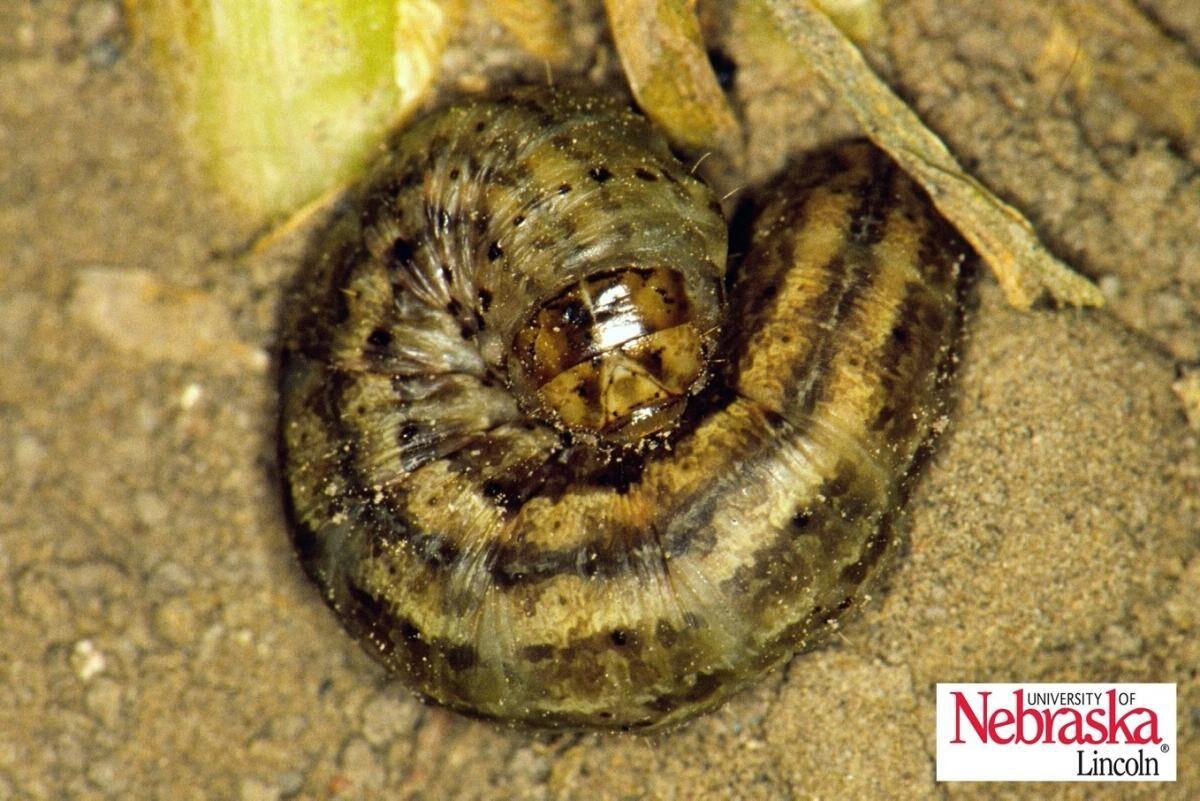 Army cutworm larvae are among the first cutworms to appear in the spring. They generally climb and feed on leaves, so they typically cause less injury than cutworms that feed below ground on the stem 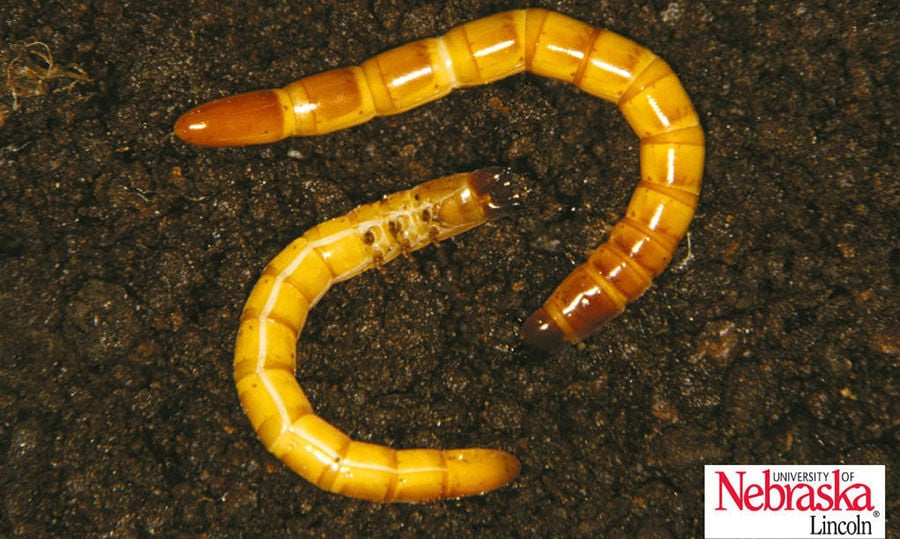 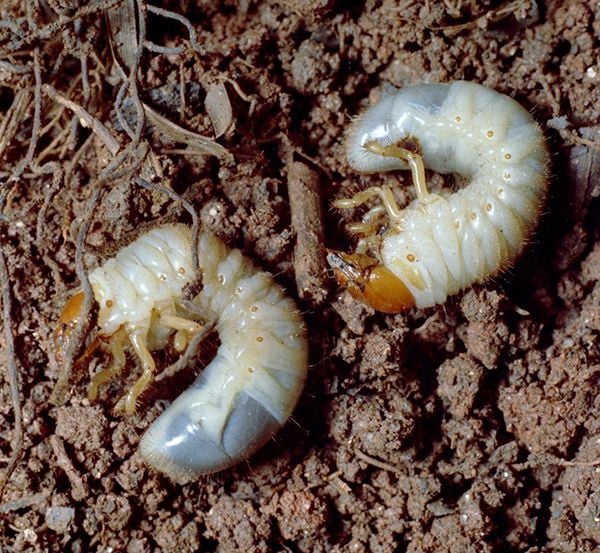