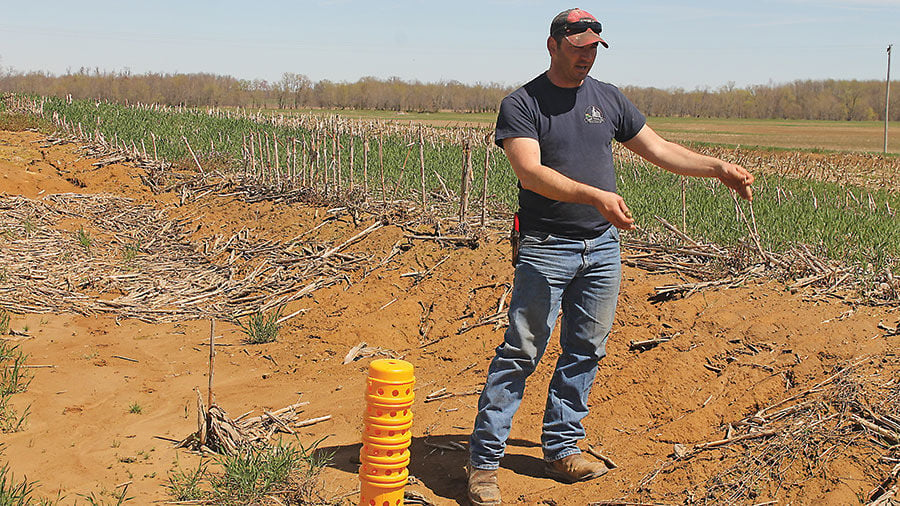 Matthew Lynch discusses how a steep-face terrace in one of his fields helps drain excess water. The trench was seeded with grass, but it didn’t take hold. 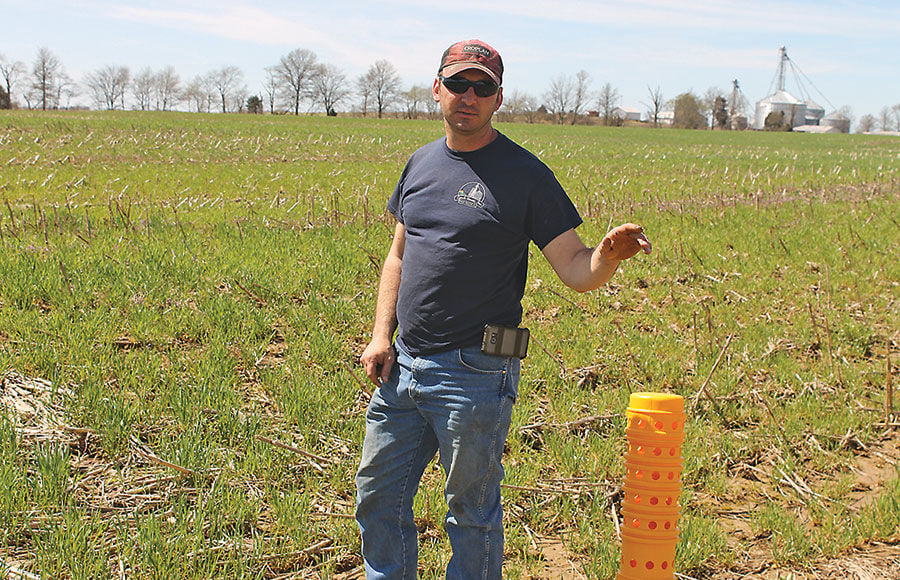 Matthew Lynch checks one of 70 risers in a field on his Edwards County farm. He combats erosion with a system of terraces and drainage structures.

WEST SALEM, Ill. — Matthew Lynch may not farm the best soil in Illinois. But he’s doing what he can to preserve it.

He is an active participant in conservation practices that he said he hopes will keep his land productive for decades to come.

“We have probably every soil type there is,” said Lynch, who grows corn and soybeans on nearly 4,000 acres in southeastern Illinois. “It’s clay-based soil that doesn’t percolate very well.”

His farm spans parts of four counties in Illinois (Edwards, Wabash, Richland and Lawrence). Much of it is classified as HEL — highly erodible land. But he has implemented strategies that have made previously untillable ground arable, he said.

The major improvements have come via years of terracing and light tile drainage.

Left to nature, large swaths of some of his fields would be grass waterways and gouged-out gullies that would stop a planter in its tracks. But Lynch is following the lead of his late father, David, who long ago took steps to improve the land.

Lynch utilizes a tiling system that consists not of a grid, but single runs of tile with entry points strategically positioned throughout the fields.

“Instead of having a waterway out in the middle of the field, we have a tile running up to the center of the waterway and then we build dams,” he said. “Water comes down to the riser and hits the reservoir. It would take 24 hours to release the water through the tile. In theory, it’s supposed to give the sediment time to release out of the soil so it stays up there closer to where it’s supposed to be.”

Though often referred to as terracing, Lynch points out that the technical term for the drainage system on his farm is a water and sediment control basin, or WASCOB. Two years ago he put in what he calls a “70-riser” system in one field. That consists of 70 plastic tubes inserted vertically that help drain excess water on the fields.

“It’s not pattern tile, not normal field tiling,” he said. “It’s a single tile that runs up the side of a hill. There are orange or yellow risers, and plastic orifices that sit in the bottom of the tile.”

The risers are 120 feet apart, or two passes with Lynch’s 60-foot planter head. The orifices vary between 2- and 3-inch holes. Natural Resources Conservation Service engineers determine the appropriate measurements, depending on factors such as slope of the land.

“A waterway works really well around here,” he said. “They do exactly what they’re designed to do, catching any sediment that comes off the field and gets caught in the grass. After a few years, your grass catches enough sediment that it’s higher than the field around it. Then you have a waterway with two gullies running on either side of it.

“They do a good job. It’s just hard to get one to last. As soon as you get it shaped and seeded down, it takes just one untimely rain to blow it all back out. These terraces are a more long-term fix. They keep your topsoil at the top of the hill, close to where it needs to be, and get the water underground and get to a surface ditch somewhere.”

Lynch takes advantage of technical and financial assistance from NRCS and other agencies. He forms the terraces himself, using a scraper and other equipment.

Aside from the drainage strategy, Lynch employs other conservation practices designed to keep soils where they need to be. He no-tills his soybeans and some corn.

“We have a vertical tillage tool that we’ll try to run pretty lightly across the ground to open it up and get some air,” he said.

He has experimented with natural fertilizers. Last year, Lynch used turkey litter on some of his ground. He likes the response he gets, but the supply — from a facility 20 miles away — is not always available when he needs it.

He has not gone into cover crops in a major way, though he has planted some ryegrass.

“We have about 300 acres of cover crop right now,” he said. “Last fall was hard. We had some rye bought, but it didn’t get delivered. We just put wheat down as a cover to get something on the ground. Covers are nice but there are still a lot of unknowns.”

Farmers try out the best, most cost-effective practices