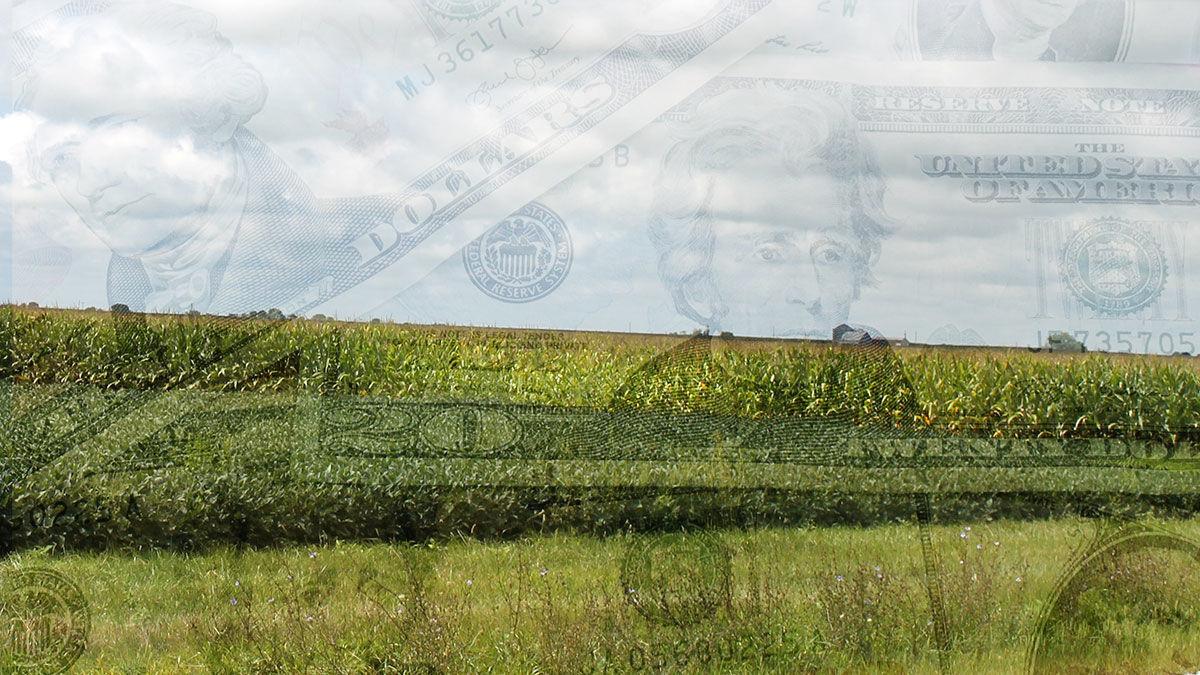 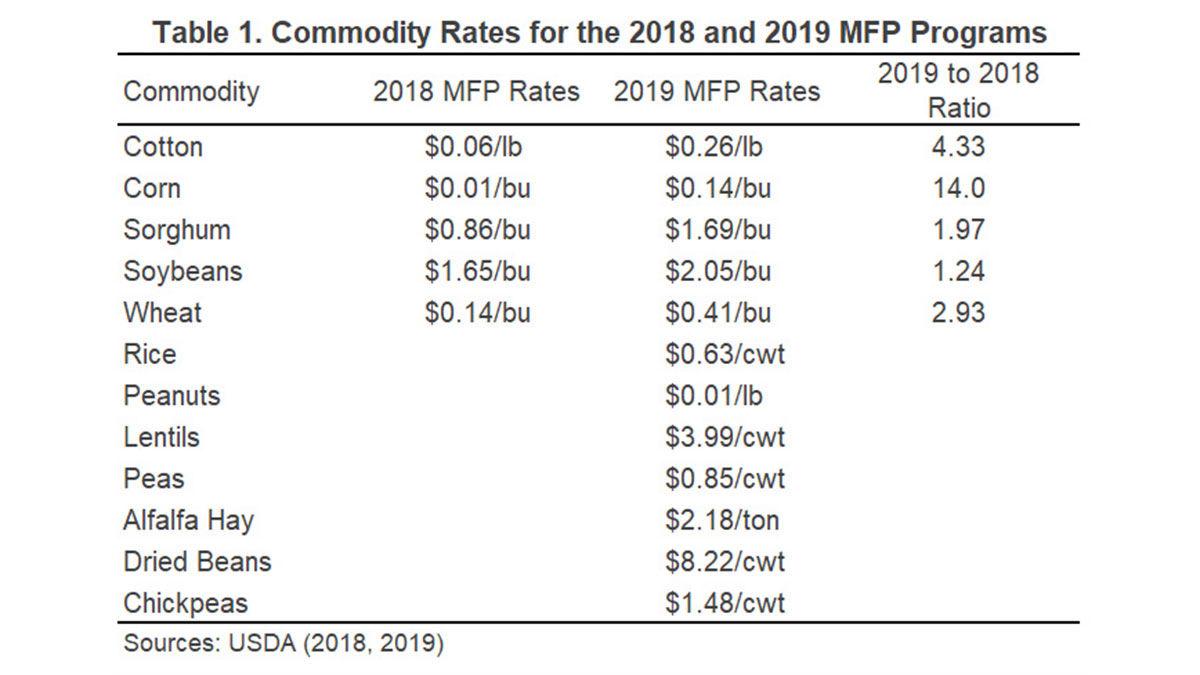 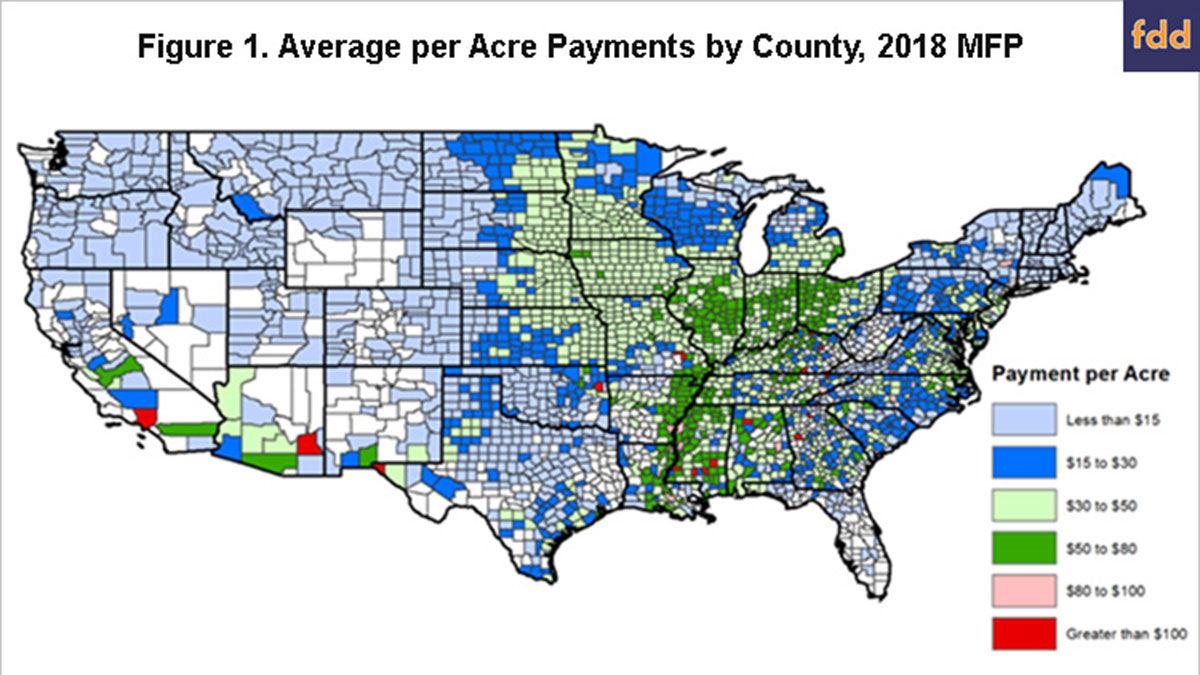 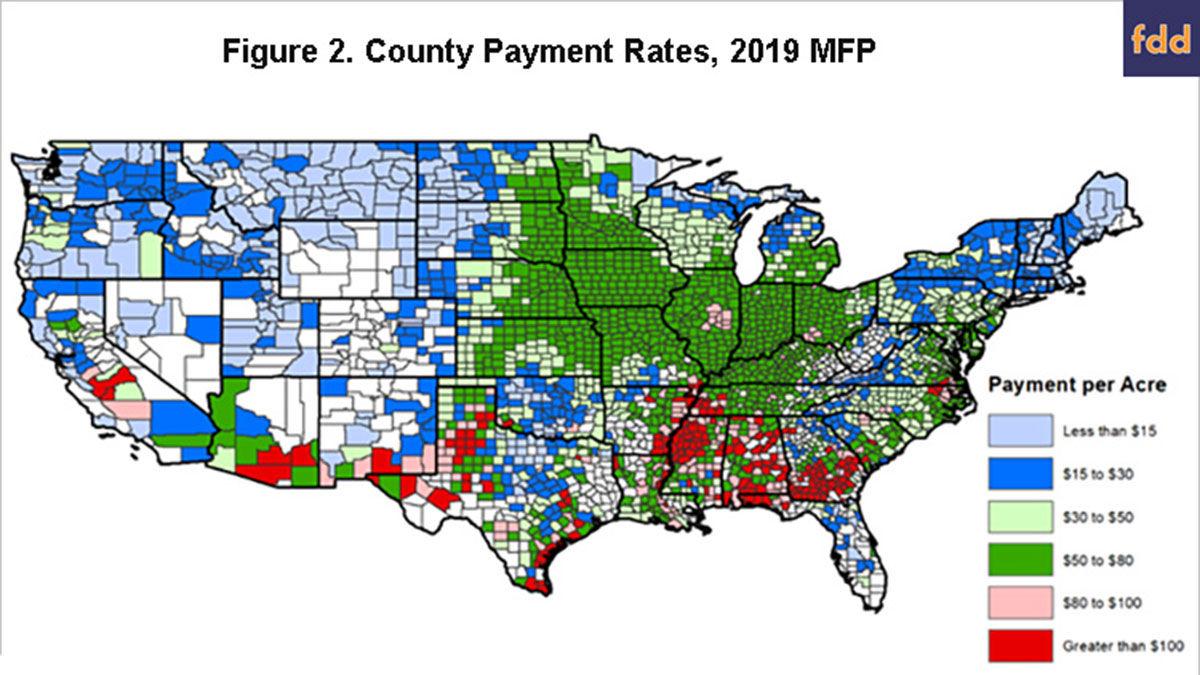 While the third tranche has not been paid, there is no indication to suggest it will not be.

This article maps 2019 MFP payment rates ($/acre), and estimated payment averages ($/acre) by county for MFP in 2018, comparing the changes and shifts in support across both years.

The MFP was created by the Trump Administration’s USDA in response to the tariff conflict it initiated in 2018 and has continued to date.

The 2019 payment rates for non-specialty commodities vary across U.S. counties on a per-acre basis, ranging from $15 per acre to $150 per acre.

The commodity rates changed, with increases of varying magnitudes, for those included in the 2018 and 2019 programs. USDA used the same broad methodology to estimate trade damages to determine commodity rates in both years, but updated their modeling work in 2019 to include a broader range of impacted commodities, account for additional and continued trade retaliation, and made adjustments to the baseline periods against which trade damages were measured.

In 2019 MFP payments were tied to planted acreage, with initial program information indicating farmers were required to plant from a list of eligible crops to receive a payment in 2019.

Payments for the 2018 MFP program were made based on actual production of the six commodities. The announcement of the 2018 program was made after the crop had been planted so, while coupled to production, it did not impact planting decisions in 2018.

The average 2018 MFP payments per acre in the $50 to $80 per acre range were concentrated in the areas of the U.S. where soybean production is concentrated, the Midwest and Delta. The high per-acre payments in soybean-producing counties are associated with the high commodity rate of $1.65 per bushel in 2018, as estimated trade damages for soybeans were large compared to the other commodities.

Smaller payments, below $30 per acre, were realized throughout most other areas of the country. Only a handful of counties had estimated payments exceeding $80 per acre in 2018, scattered throughout southern parts of the U.S.

For the 2019 MFP program, payments per acre generally increased from 2018 to 2019 because more money was made available for the program, commodity rates increased and it was expanded to include additional commodities. In 2019, per-acre MFP support is greatest in areas of cotton production in the south where a number of counties have payment rates exceeding $100 per acre.

Payments in Midwest counties are mostly in the $50 to $80 per acre range, with payments exceeding $80 per acre for some pockets of counties in central Illinois and southern Ohio.

Payment levels decline to a range of $30 to $50 in the fringe areas around the Midwest, and fall to less than $30 per acre in the West and western Plains.

The general increase, and regional shifts, in per acre MFP payment levels from 2018 to 2019 was driven by a number of factors.

USDA announced it would pay $14.5 billion by making use of the borrowing authority of the Commodity Credit Corporation for 2019 MFP payments. This level of spending represents a nearly 37% increase from the 2018 authorization ($10.6 billion) and a more than 68% increase from total payments provided for 2018 ($8.6 billion).

In addition to the increase in aggregate funds, USDA also increased the commodity rates for commodities included in MFP’s trade damage estimation for both years.

In August, the USDA explained that the new commodity rates were based on estimated trade-related damages. For example, the rate for cotton increased more than four-fold while the rate for soybeans increased by 24% from 2018 to 2019. Corn realized the largest relative increase because its 2018 rate was only 1 cent per bushel in 2018; for 2019, USDA increased the rate by a factor of 14 to 14 cents per bushel.

Large relative increases in payment levels occurred in areas of the South. These increases are likely due to the inclusion of additional crops as well as the larger 2019 commodity rates for crops grown in that region, such as cotton, in 2019.

Payments in the majority of the Midwest region tended to increase in the 40 to 80% range, consistent with the increase in aggregate funding authority for MFP in 2019 and the larger commodity rates for corn and soybeans.