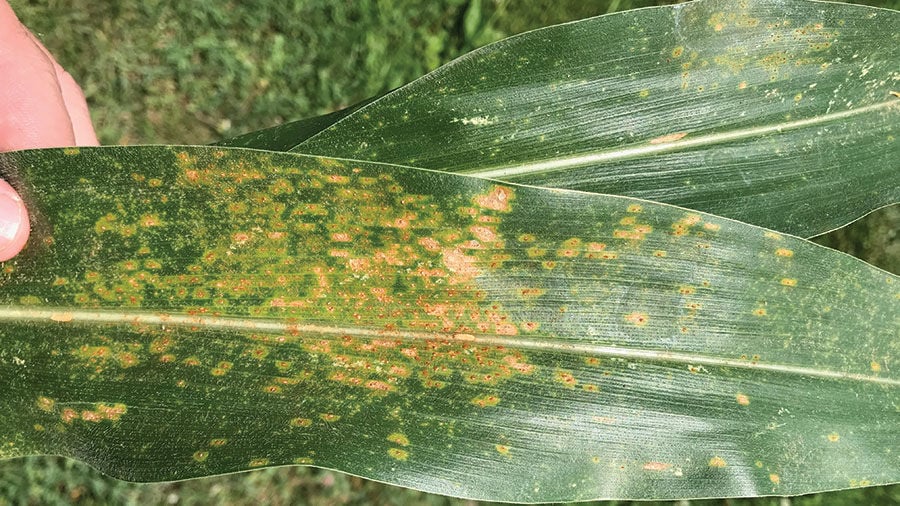 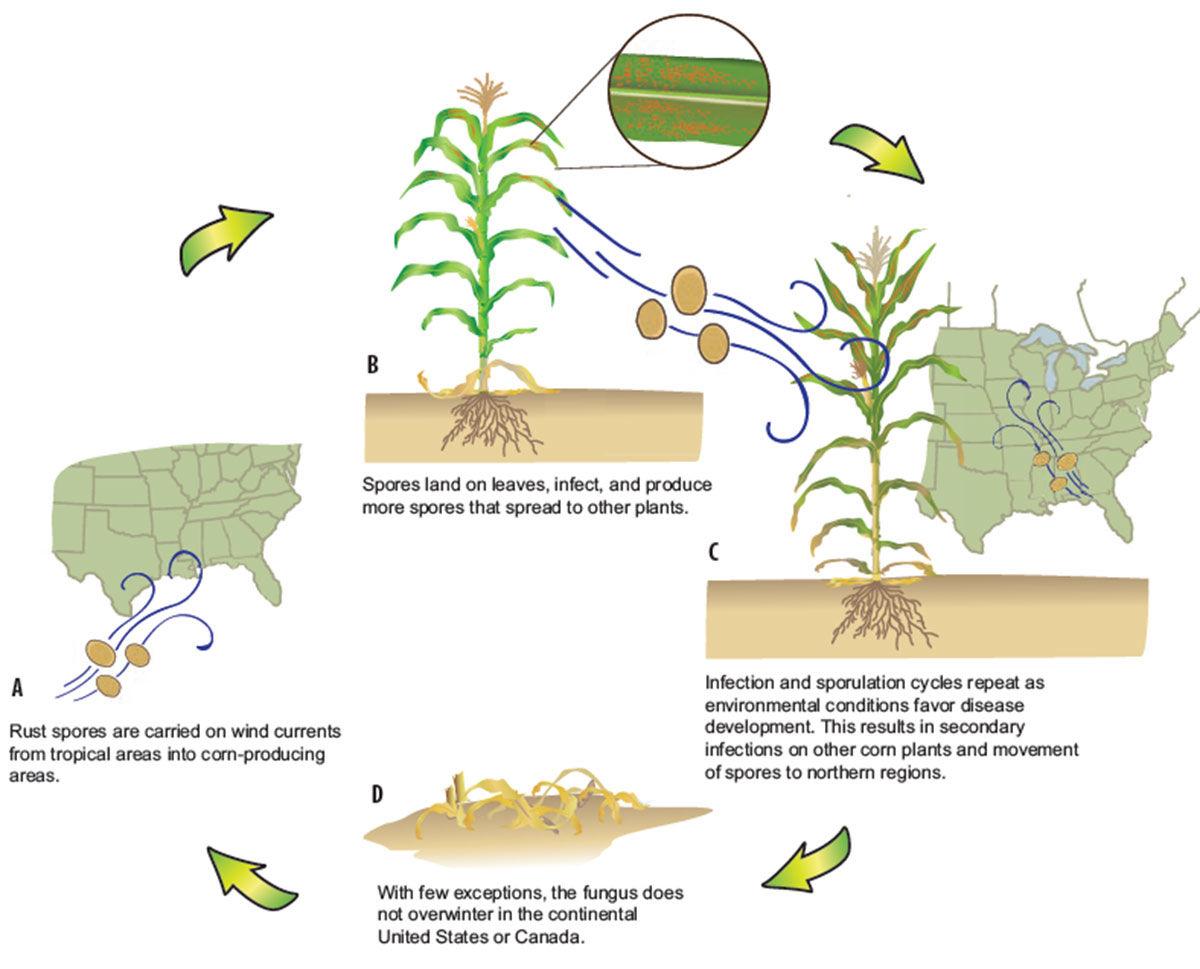 Example lifecycle of Southern rust. Note that it blows in from warmer, southern regions.

Southern rust does not overwinter in Illinois and blows into the state from warmer regions. In years when it develops to a significant degree early in southern regions, it can move into Illinois during critical stages in crop growth.

Pustules are mostly found on the upper leaf surface, which can help distinguish it from the less damaging common rust.

Spores from pustules can be dispersed miles on air currents, allowing the disease to spread rapidly. Under hot, humid conditions, spores of the fungus can infect susceptible corn, and symptoms can be observed within three to four days. Within seven to 10 days, spores are produced and can be dispersed.

The cycle of spore-infect-spore can continue as long as conditions are conducive and corn plants are green. Conditions that favor disease development include hot temperatures (morning low of 75 degrees and daytime high of 93 degrees) and at least 4 hours of consecutive leaf wetness. Outside of these conditions disease progress can occur, but at a slower rate.

Our colleagues to the South state that Southern rust can continue chugging along at 110 degrees. That’s pretty impressive.

In general, we see the disease move in most years in late July or early August. This means that in years when plantings are delayed, the disease can arrive on time but plants may be at greater risk for yield loss because the earlier infections occur the more yield can be impacted.

The impact that a foliar disease will ultimately have on corn yield is often related to when the disease starts to develop relative to plant growth. Foliar diseases ultimately reduce carbohydrate allocation to developing ears, thereby reducing yield.

Thus, earlier infections are more likely to result in sufficient disease severity to significantly reduce photosynthetic areas at critical stages in grain fill. This effect is supported by a recent metaanalysis showing that fungicide applications made between VT and R2 are the most effective in terms of disease management and potential profitability.

To manage the disease, know your hybrid. Although the majority of corn hybrids in the Midwest lack adequate resistance to Southern rust, there are a few hybrids that that have some resistance to this disease. Resistant hybrids will greatly slow the ability of the pathogen to infect, produce symptoms and reproduce.

Second, monitor the disease and your crop growth stage. Polysora is an obligate pathogen and needs to blow into the state each season, unlike grey leaf spot or tar spot. Thus, by paying attention to where the disease is, knowing your hybrid and knowing the crop growth stage you can make informed management decisions.

Disease occurrence can be monitored in real time by accessing the website corn.ipmpipe.org/southerncornrust/. As a rule, if you notice that your county or a nearby county has been marked positive for Southern rust, plan on scouting fields and assessing growth stages.

Although some disease may develop late, benefits of fungicides will most likely be realized if the disease arrives before R4 and conditions remain favorable for disease development.

Consider fungicide applications. Remember, fungicides can be effective for managing Southern rust if the disease arrives before R4, and applications are made just prior to disease onset. A general efficacy table for fungicides is annually updated at the Crop Protection Network, and a link to the most recent list can be found at https://go.aws/39BP1F0.